The next time you go out to eat, consider supporting these businesses owned by powerful vegan women.

We’re all about uplifting women, which is why Women’s History Month is so important! In honor of the occasion, we’ve created this list of 27 women-owned Los Angeles vegan restaurants, food trucks, and pop-ups.

Azla was founded by Ethiopian American Nes Abegaze and her mom, Azla Mekonene. The menu includes tacos, burritos, and bowls inspired by the flavors of traditional Ethiopian food. With ingredients like mushroom tibs, fava beans, jackfruit, and turmeric slaw, these dishes pack a satisfying punch! 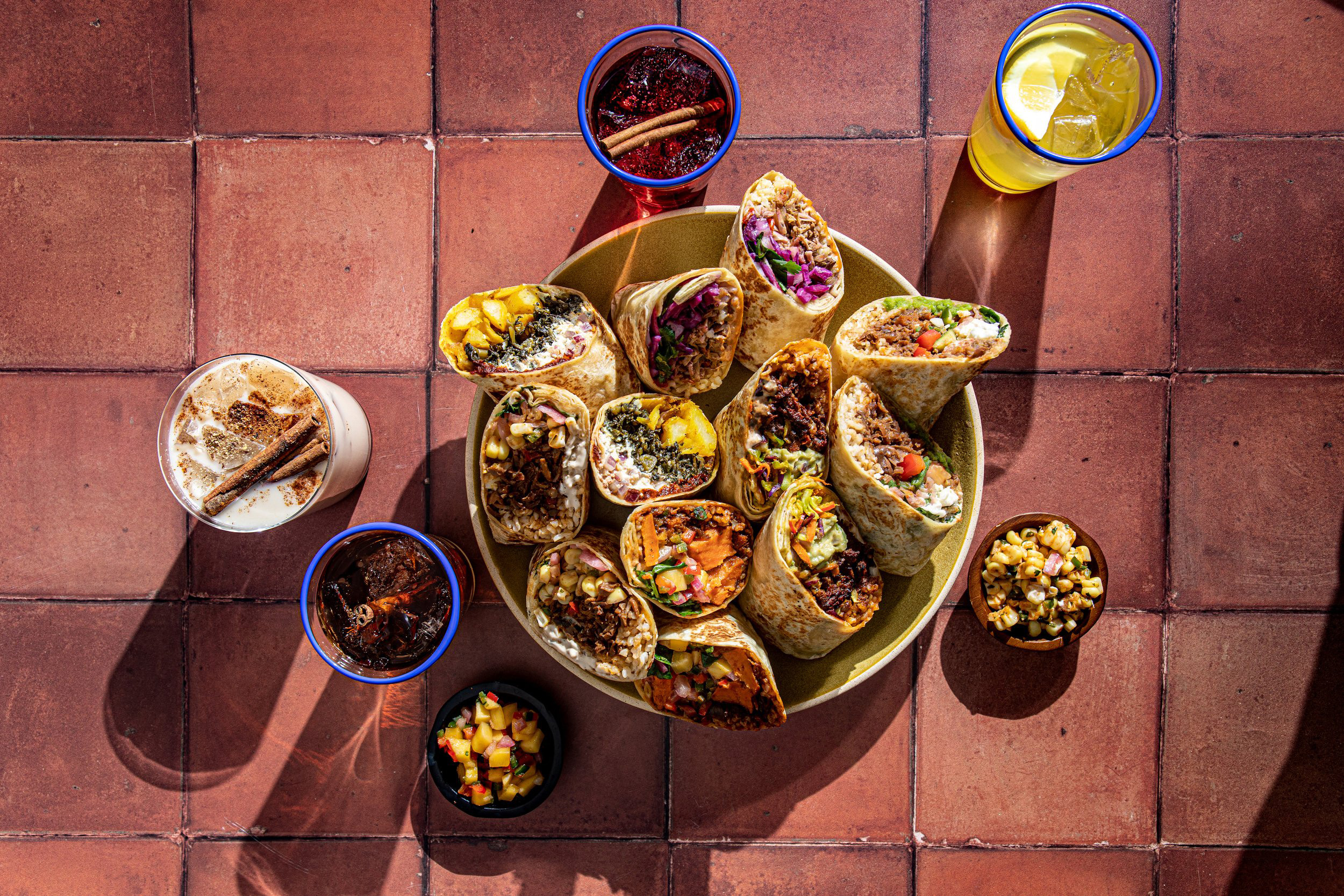 The vegan breakfast sandwiches at Little Barn Coffee House are some of the best in SoCal! Served on a buttery, flaky croissant or perfectly baked biscuit, these handhelds are not to be missed. When paired with the Horchata Cold Brew? Chef’s kiss! 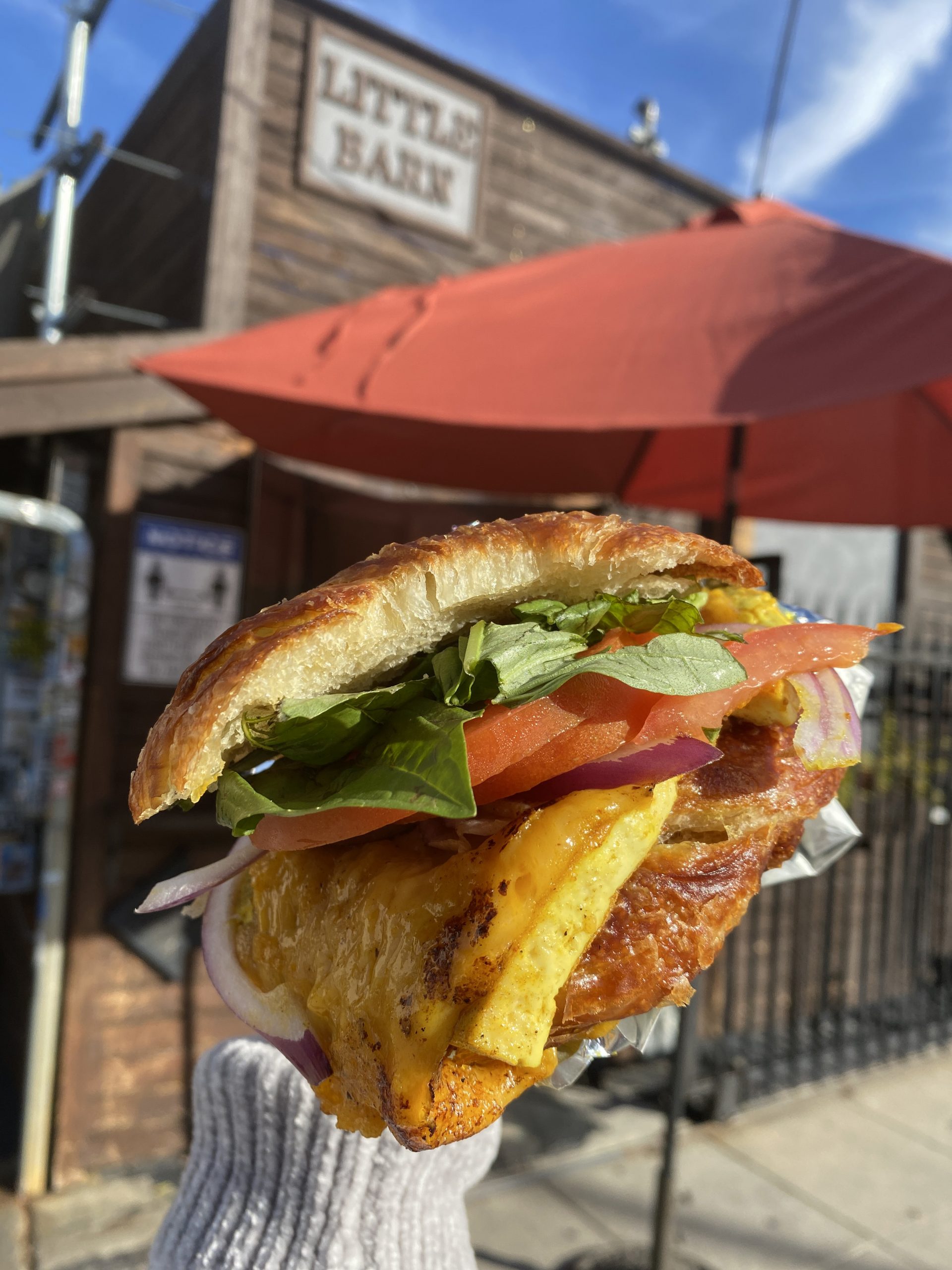 Chef Tara Punzone is making waves in LA’s food scene with her insanely delicious vegan Italian dishes at Pura Vita. From fresh-made pasta and satisfying pizzas to decadent desserts and all sorts of vegan wines, Pura Vita is a must-try for vegans and non-vegans alike! 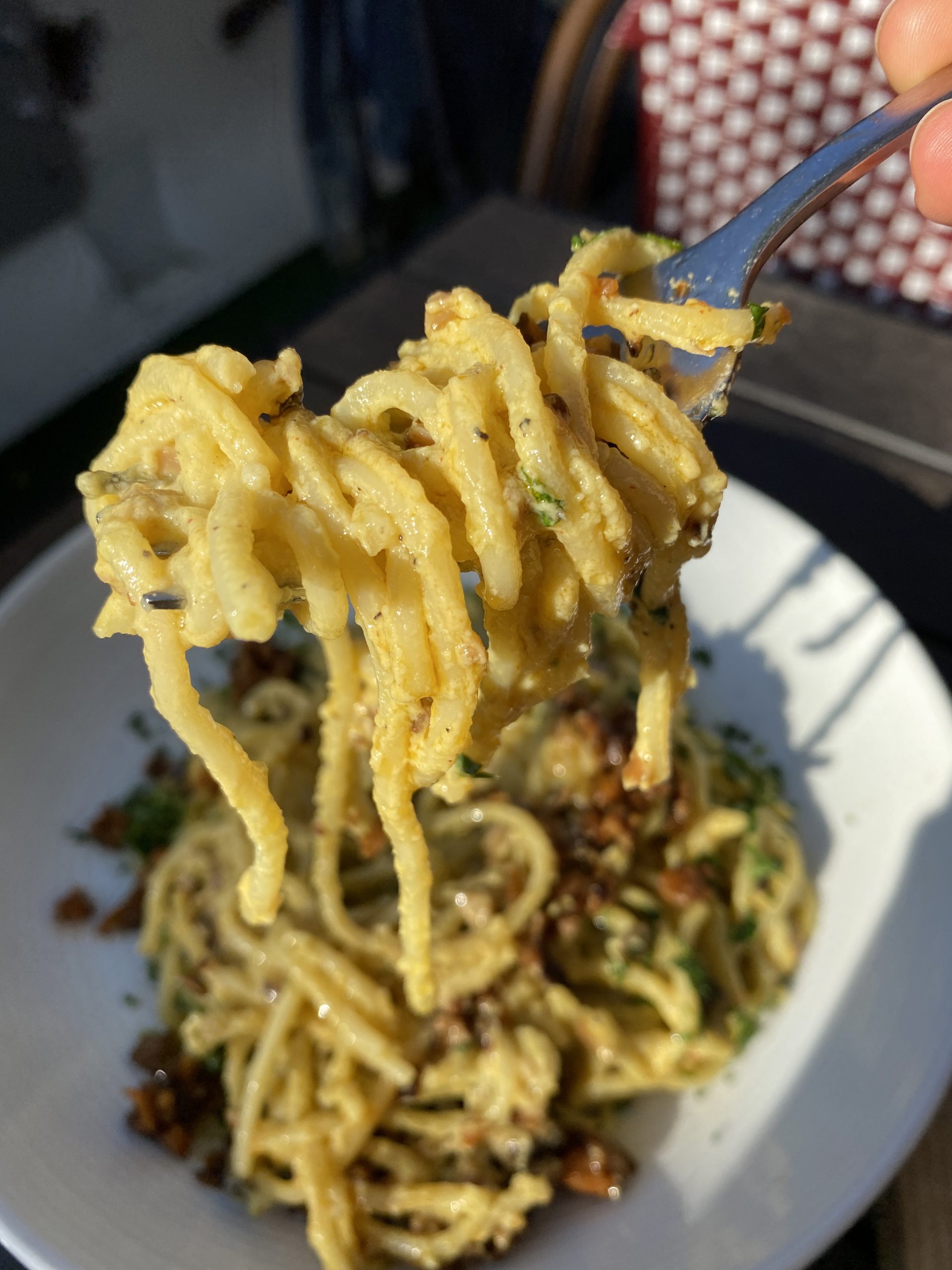 If you haven’t ordered food from Jackfruit Cafe, you’re missing out! Founder Angela Means Kaaya is so very kind and her food is downright delicious. We recently stopped by and had the Birria Tacos, Crunchwrap, and Soul Bowl and can’t stop thinking about how amazing everything was. 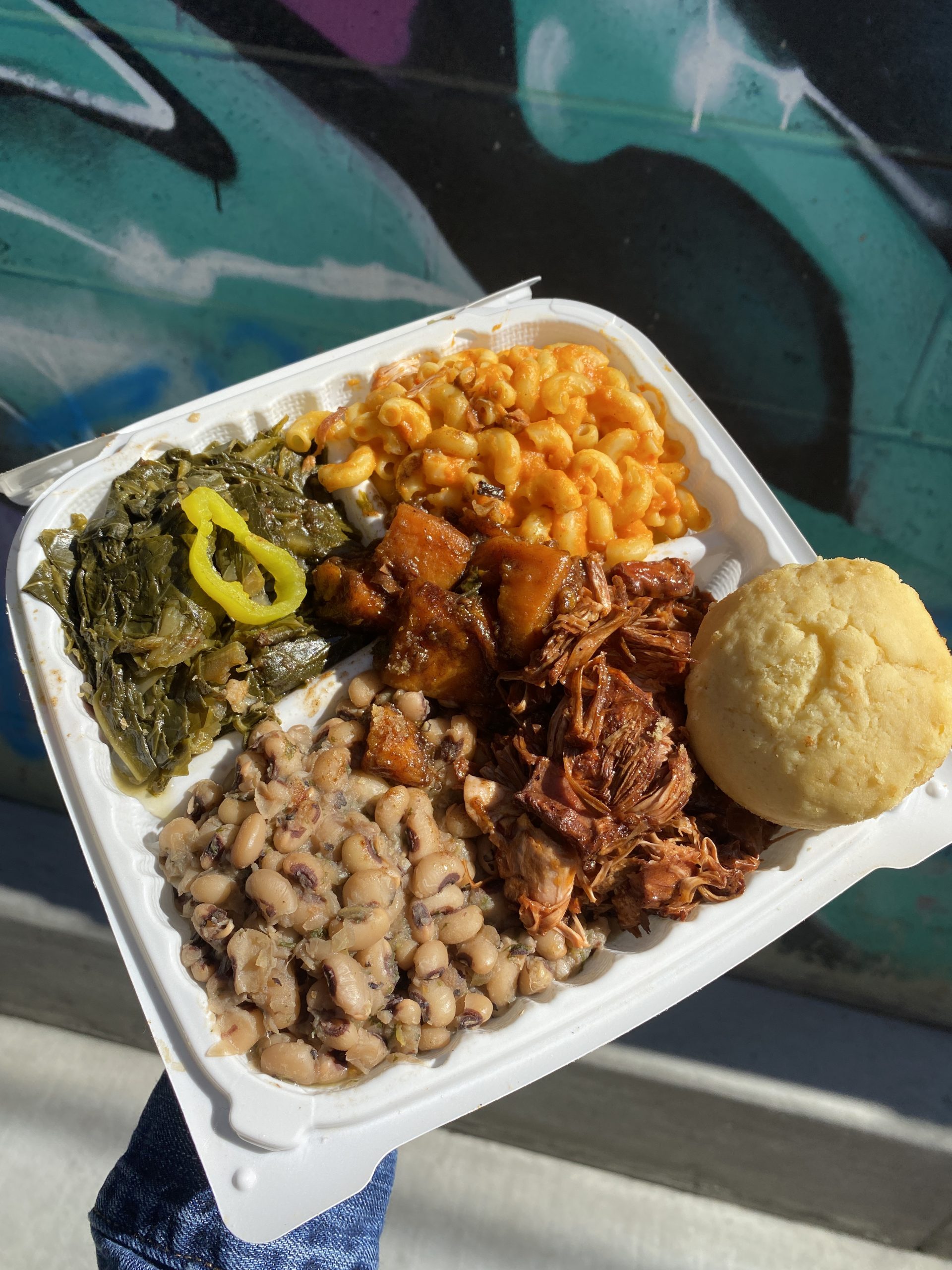 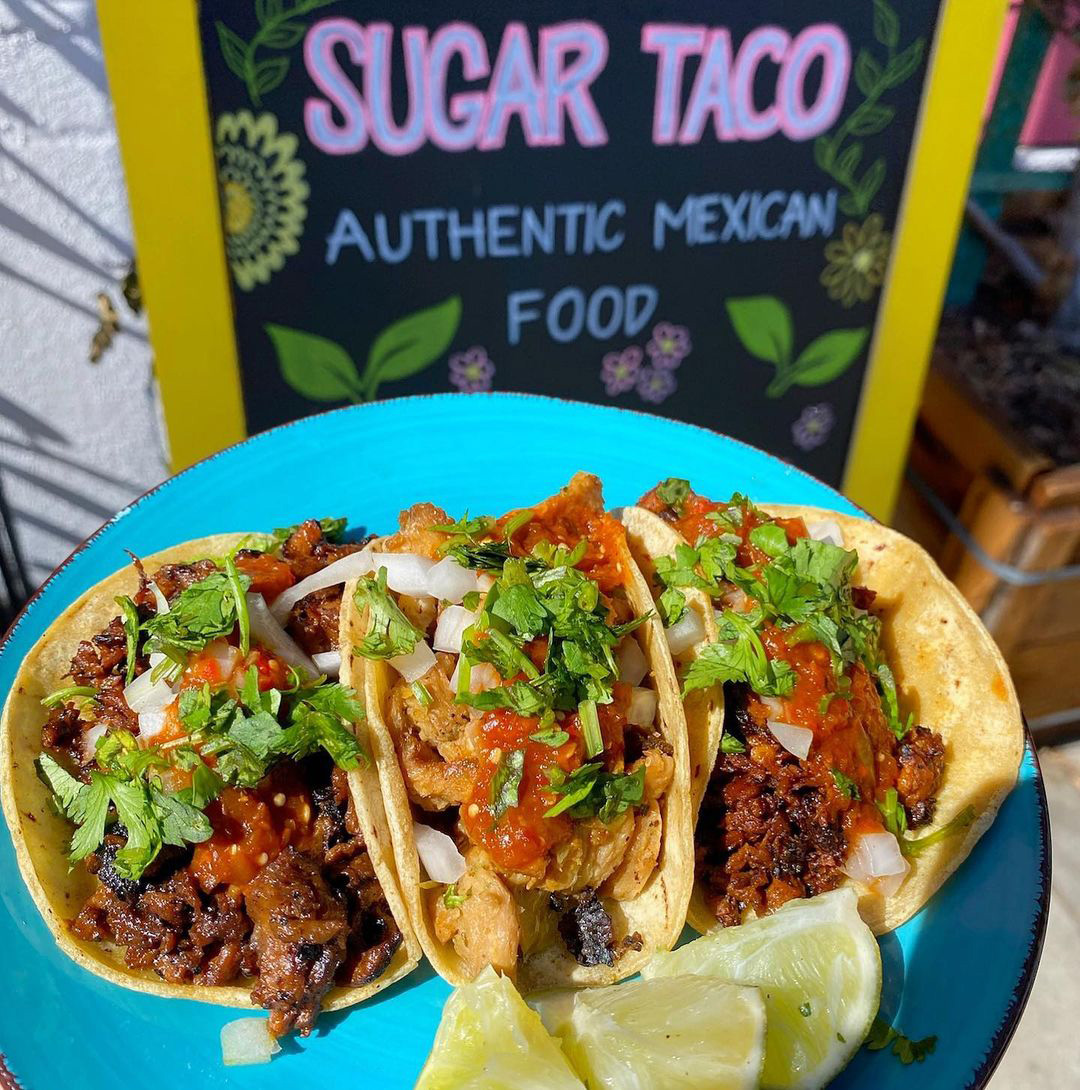 L.O.V.E., which stands for Love Organic Vegan Eating, is a vegan Thai restaurant founded by the same female team who brought us H.O.P.E. in Studio City. The menu at this West Hollywood gem showcases the popular Thai staples of Pad Thai, Beefless Garlic Green Beans, Green Curry, and more. 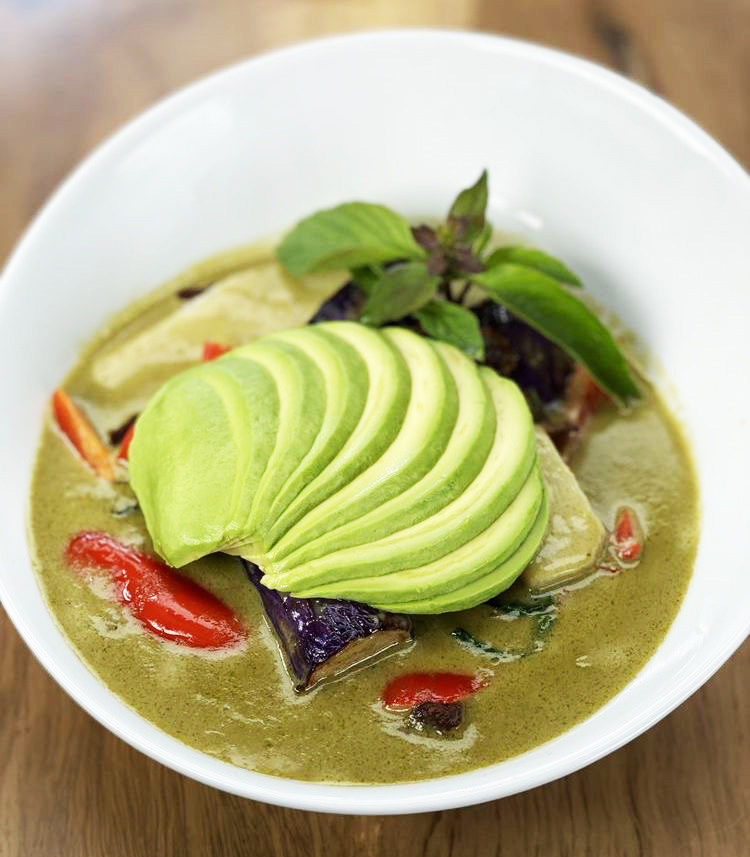 Valerie Babayan first began baking vegan, gluten-free confections with her mom under a cottage food license in 2015. A few years later, she opened a brick-and-mortar with a menu of sweet and savory dishes inspired by Eastern European flavors. The Truffle Melt, Pita Stuffed Meat and Potatoes, and Vegan Chocolate Croissant are a few of our faves. 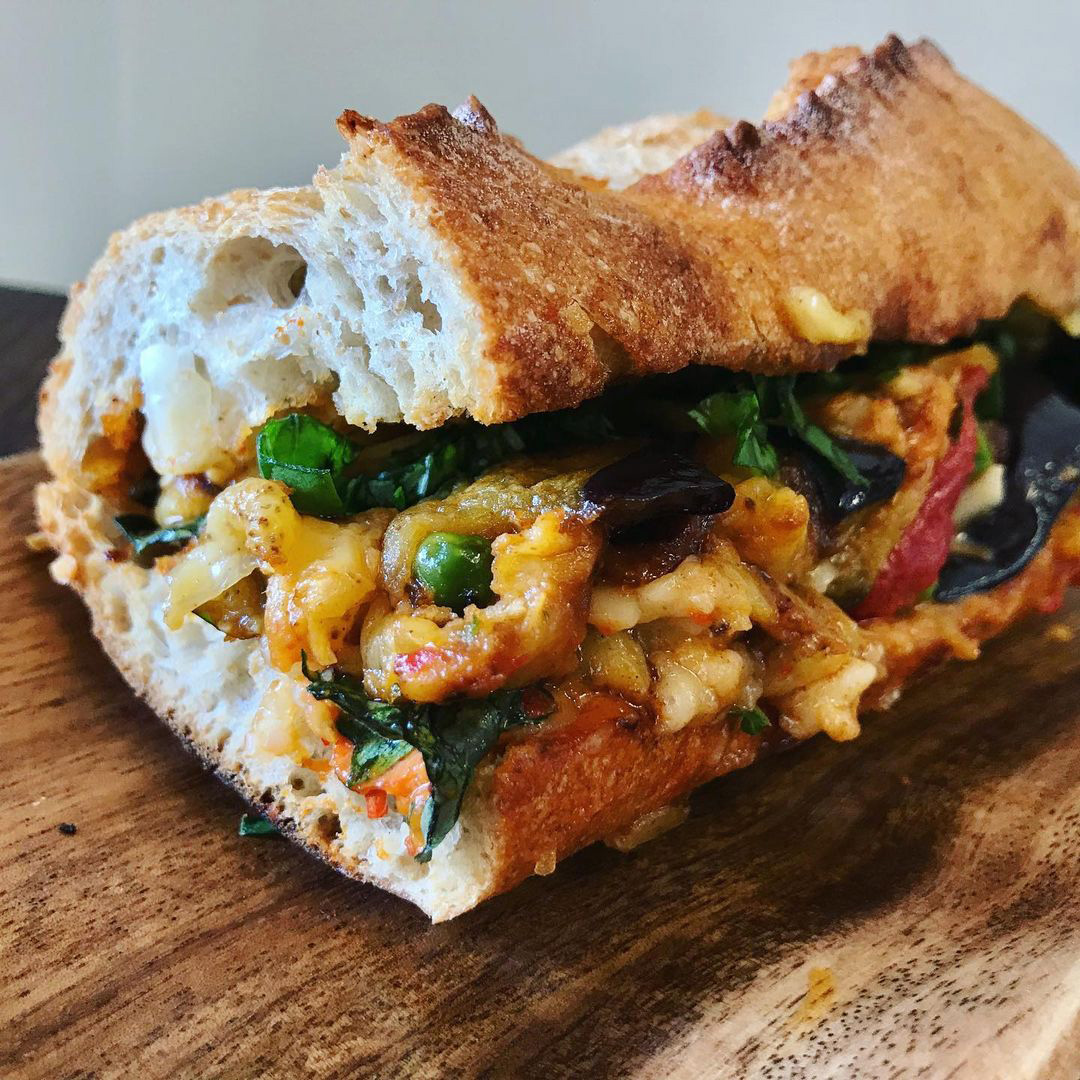 From popping up as T&T Lifestyle to opening this brick-and-mortar, Chef Tete Alemayehu has been amazing customers with her Ethiopian fare with a modern twist. Berbere’s most popular menu items are the ET Twist Sliders and Tacos—both popular dishes that are made with Ethiopian flavors and ingredients. 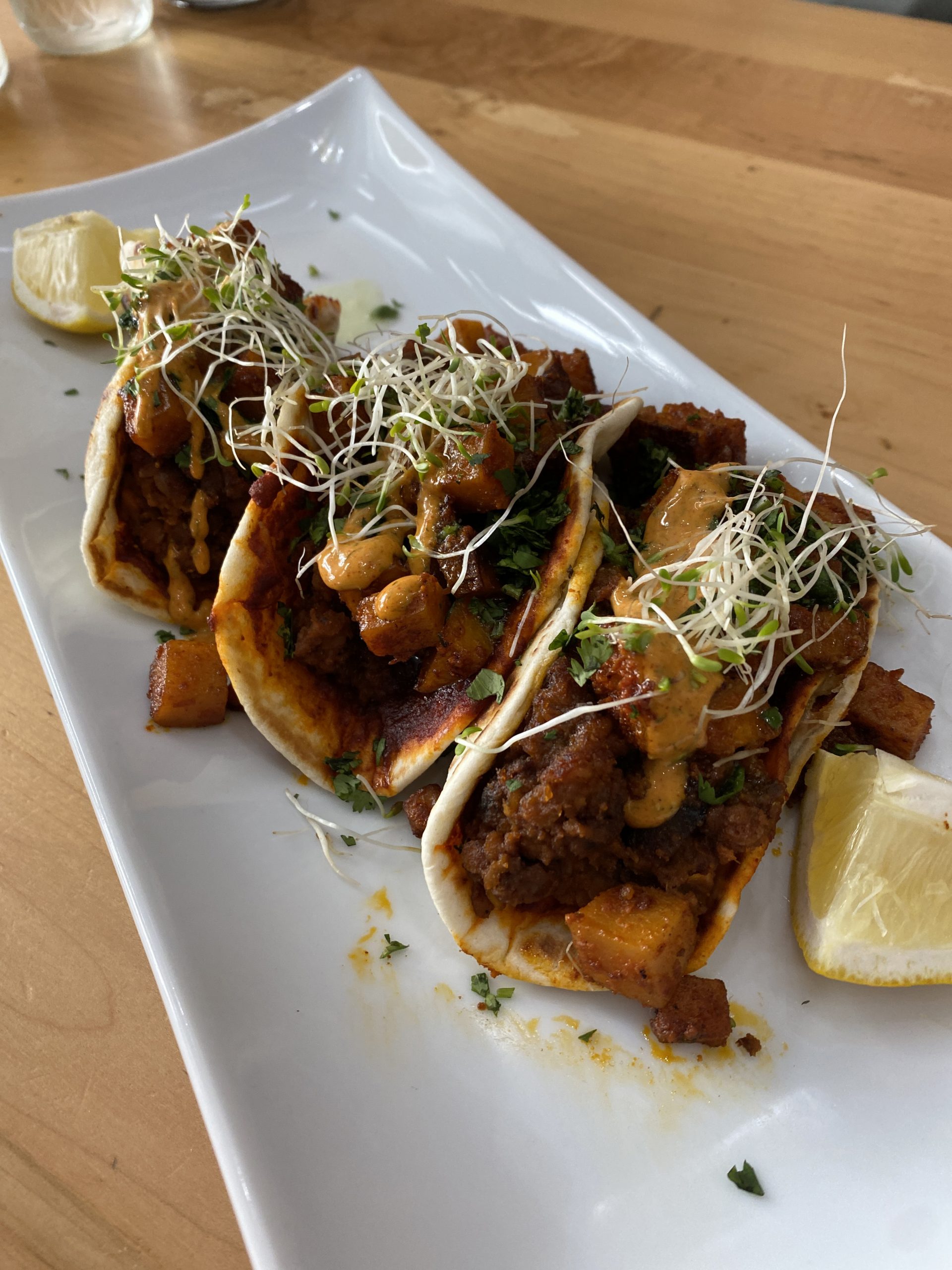 Who isn’t obsessed with Kick Ass Vegans? Serving mac ‘n’ cheese, hot dogs, po’ boys, loaded fries, and more, this food truck is always a go-to. Their DTLA Dogg is made with a vegan bacon-wrapped bratwurst topped in onions, mixed peppers, avocado, pico de gallo, and mayo on a toasted bun. It SLAPS! 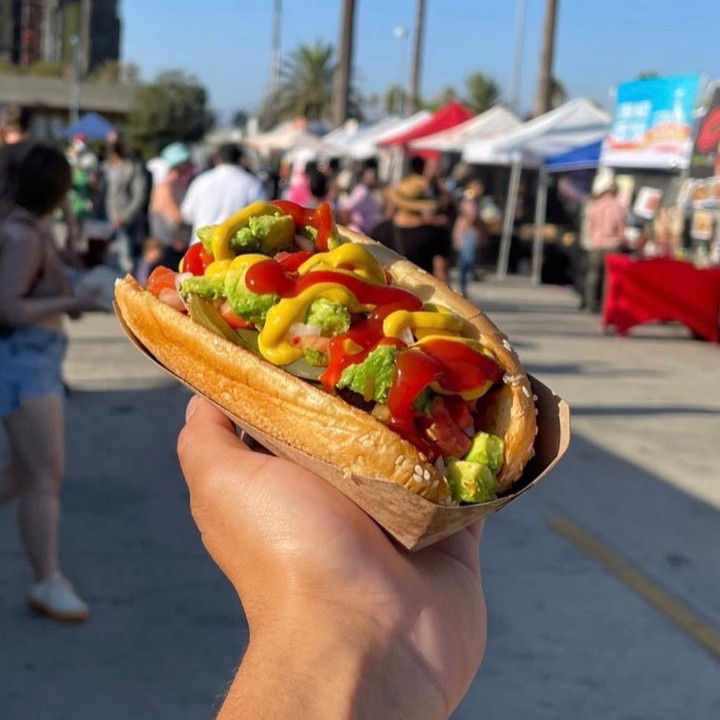 At Chicana Vegana, Mexican and Californian cuisines meet to make some of the most epic vegan dishes. From the Cali Baerito jam-packed with fries, cheese, cashew sour cream, guac, and your protein of choice to Street Tacos, Chili Burgers, and Tres Leches, this vegan restaurant has something for everyone. 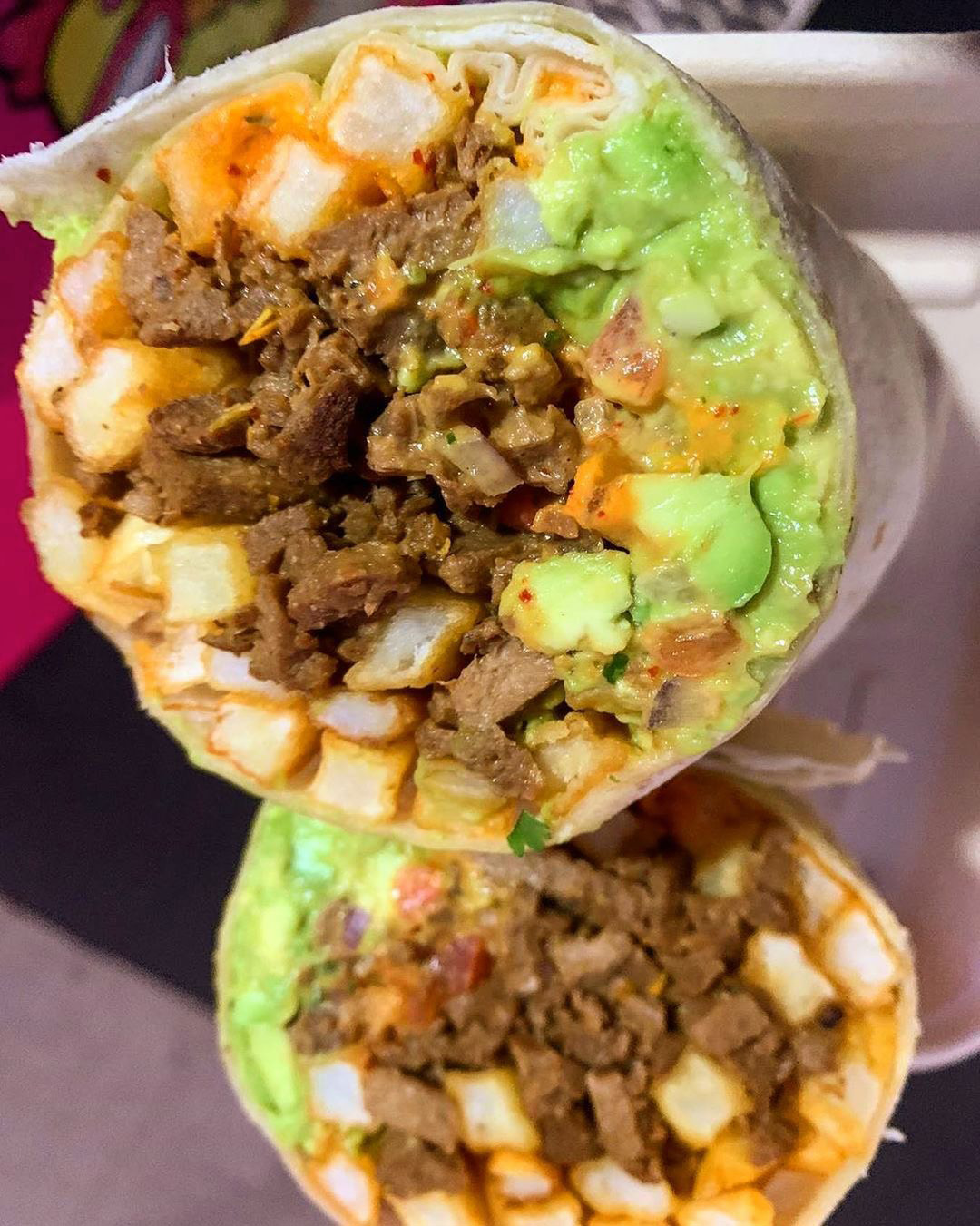 Meatball subs, coconut calamari, and fettuccine Alfredo are just a few of the dishes you can order at this vegan Italian eatery co-owned by sisters and long-time vegans Julie and Shelly. At Julie Goes Green, sustainability is the priority. Beyond offering plant-based food, the restaurant uses biodegradable packaging and recycled decor, among other eco-friendly practices. 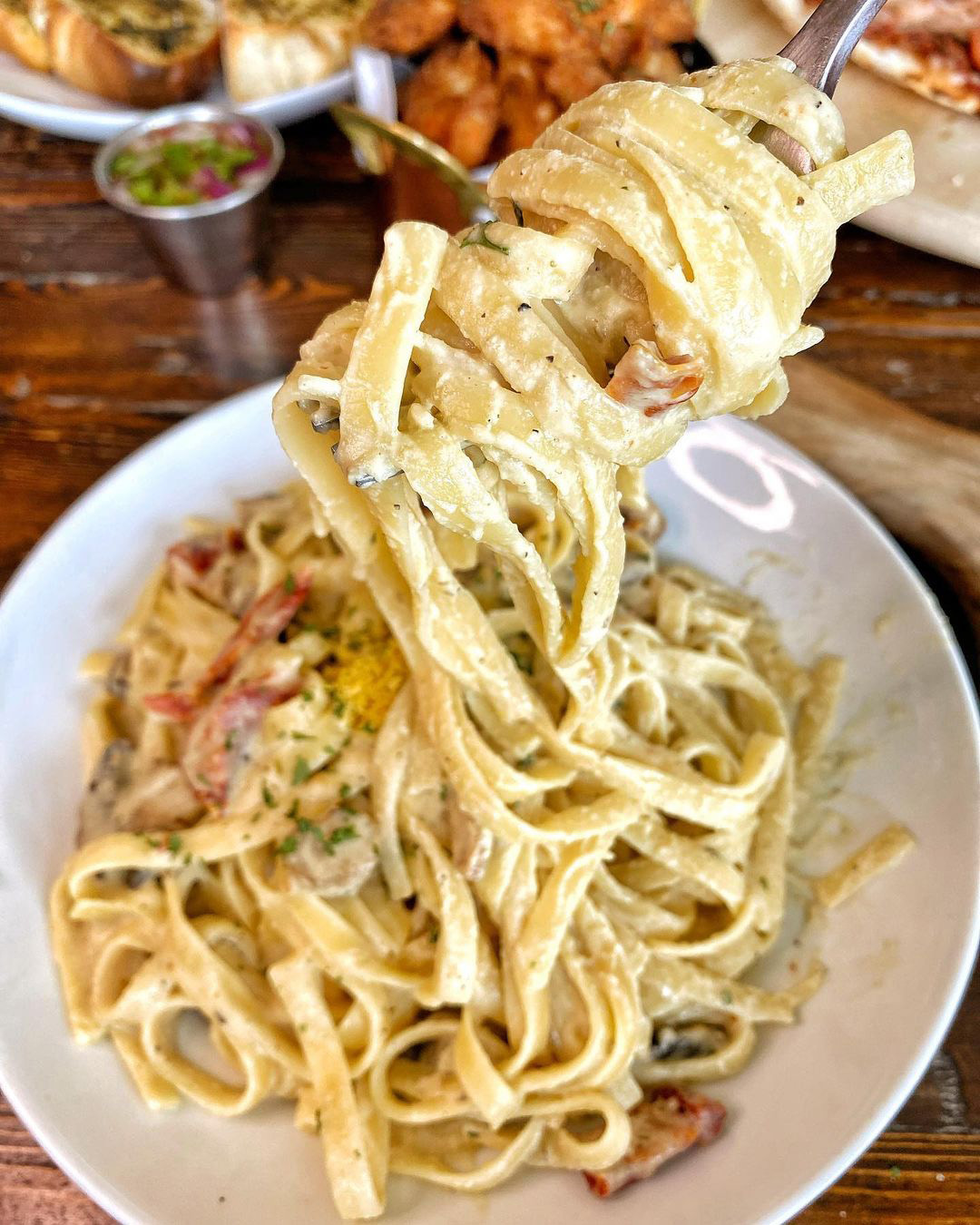 Srey Vegan is one of the newest Los Angeles vegan restaurants! It first began (and still operates) as a pop-up but recently expanded to a brick-and-mortar location in Mid-City. With a full menu of plant-based Cambodian food made by the wonderfully kind and talented Surray Lor, this restaurant is a must-try. 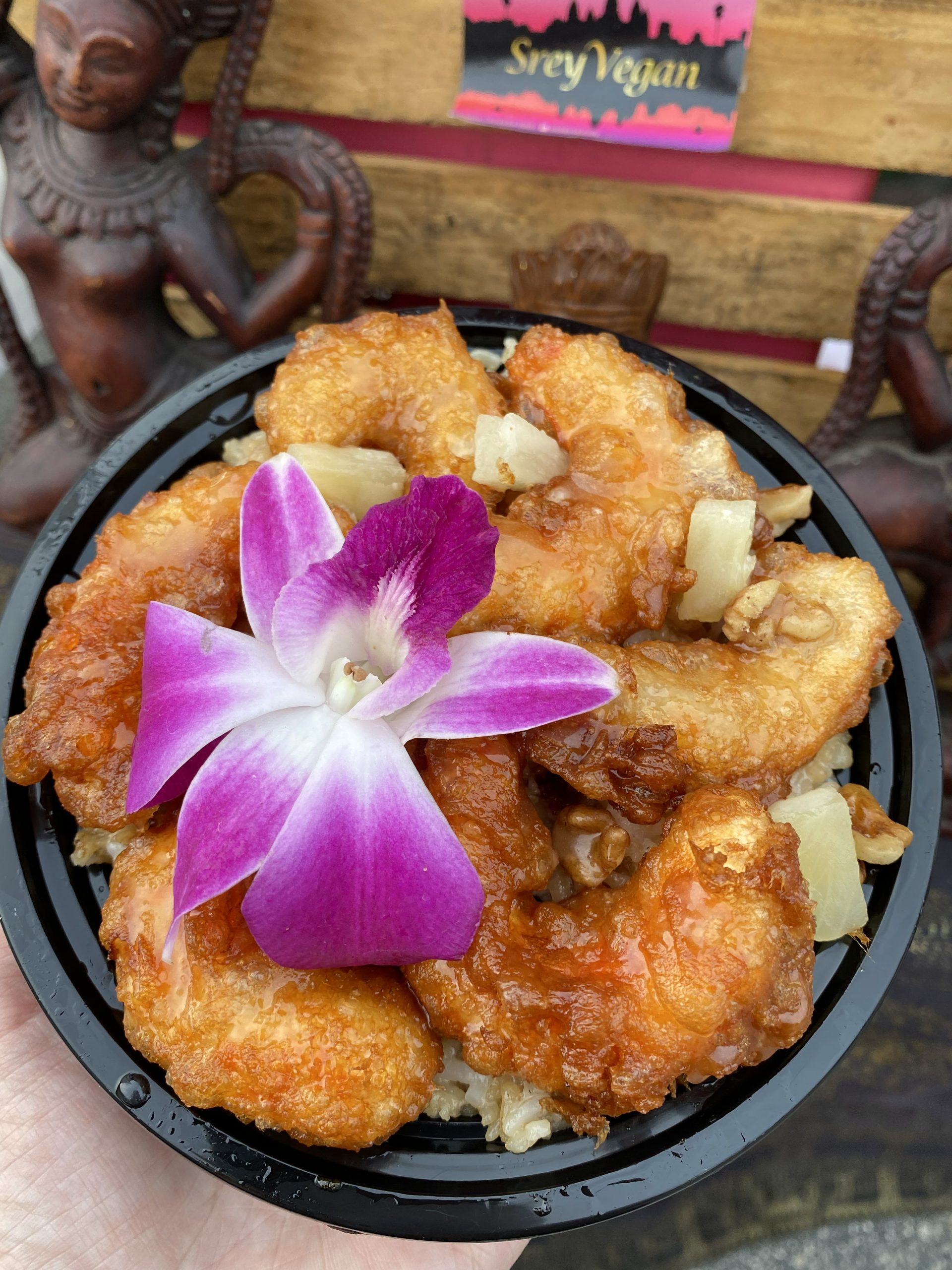 Centric Eats is changing the way we view mushrooms! This Black-owned food truck takes oyster mushrooms, fries them, and seasons them to perfection. When we say this vegan fried chicken alternative is the real deal, we mean it! Be sure to try their new BBQ Jerk and Hunny Mustard flavors. 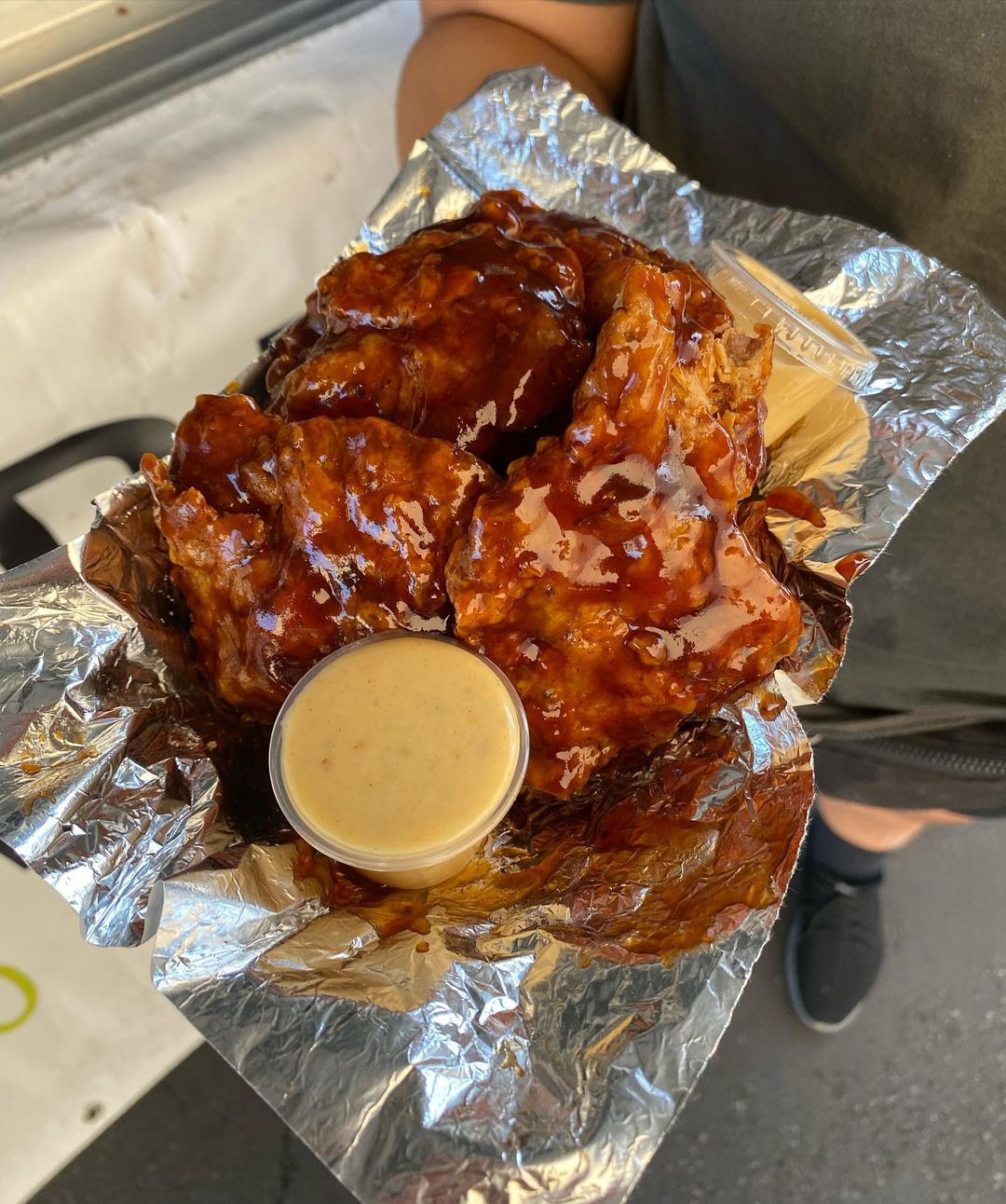 This vegan pop-up is one of our favorite stops at Smorgasburg LA! Owner Megan Tucker has done a wonderful job veganizing Jewish classics such as challah, babka, pastrami, corned beef, and more. Made from whole food plant-based ingredients, these alternatives will give you the nostalgia of eating your childhood faves without the tummy ache. 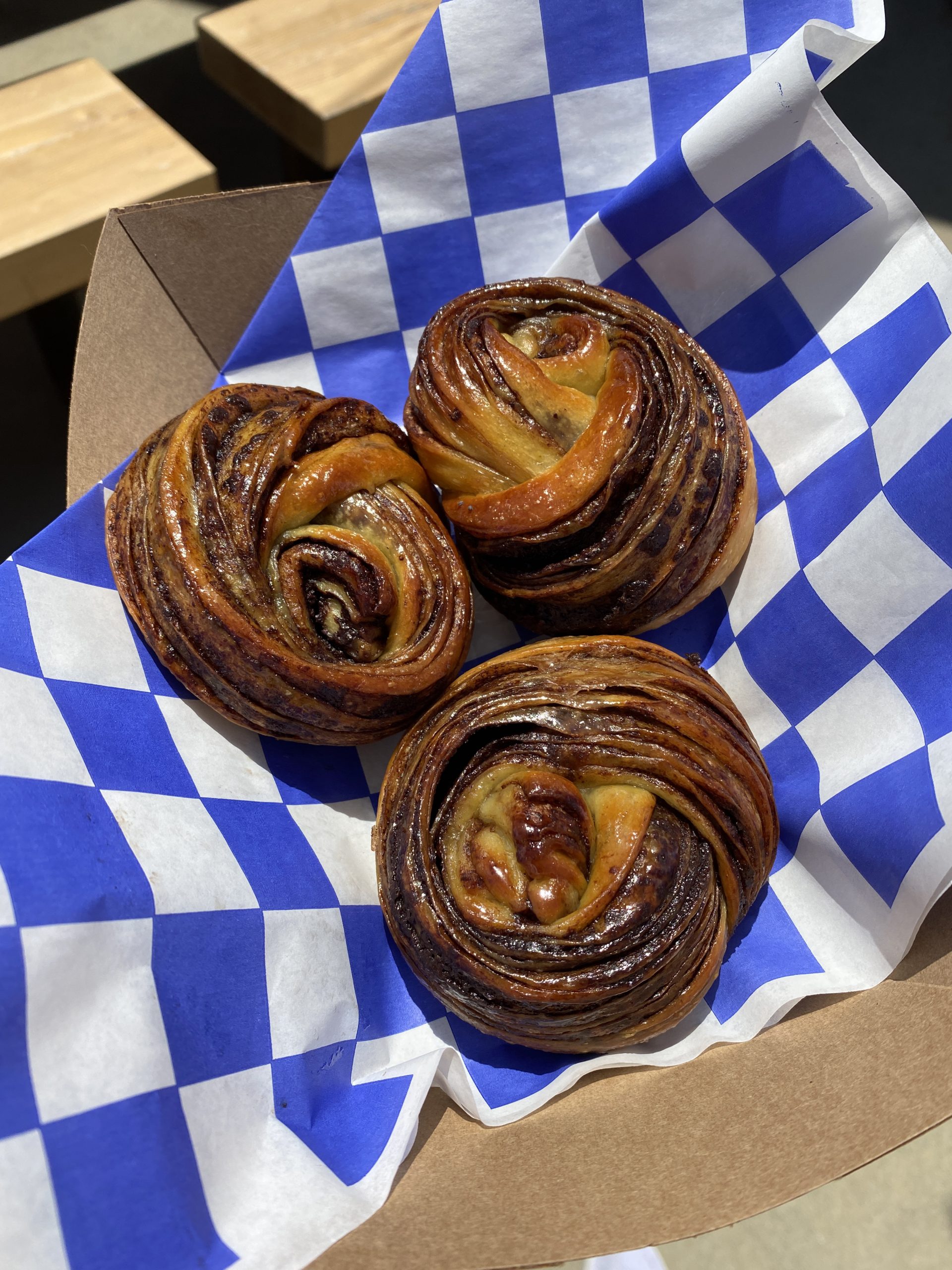 If you’re in search of traditional Ethiopian food but don’t want the stress of figuring out the vegan options, go to Rahel Ethiopian Vegan Cuisine! This all-vegan eatery is known for its delicious Ethiopian platters of injera loaded with classic stews made from vegetables and legumes. 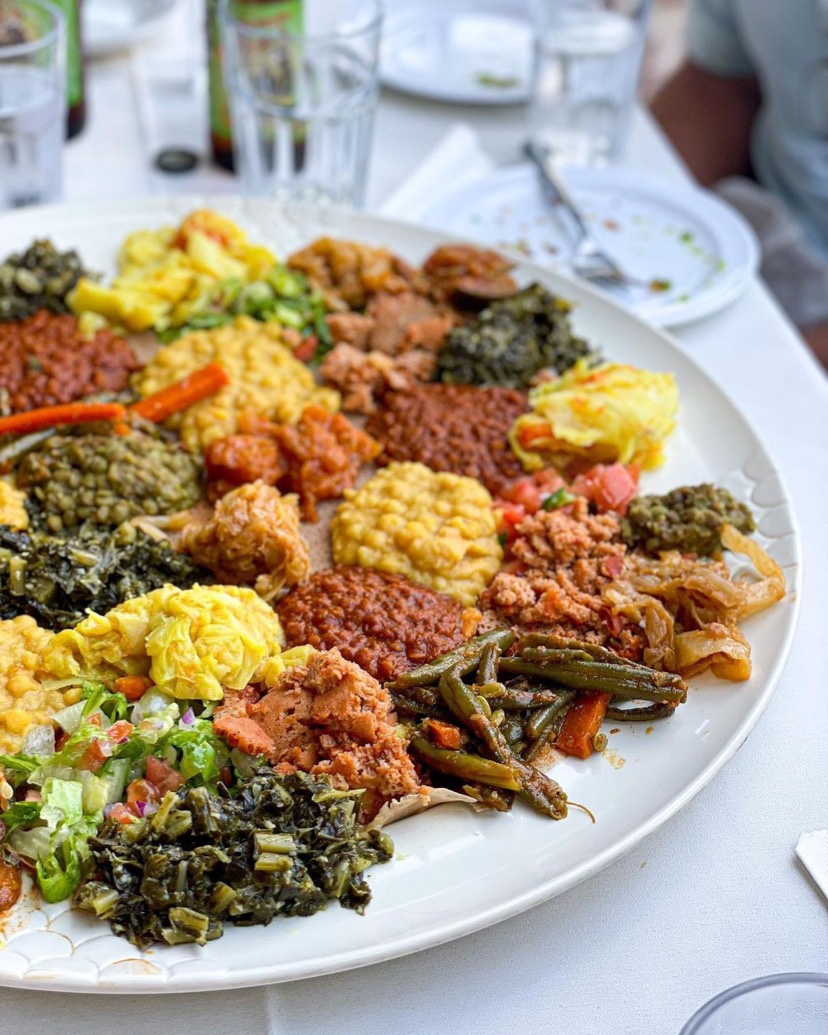 From breakfast and lunch to dinner and dessert, Real Food Daily is one of our go-to Los Angeles vegan restaurants. The Cheeseburger Eggrolls, Sun Dried Tomato Pasta, and Adaline’s Burrito Plate are some of the newest menu additions to try out. 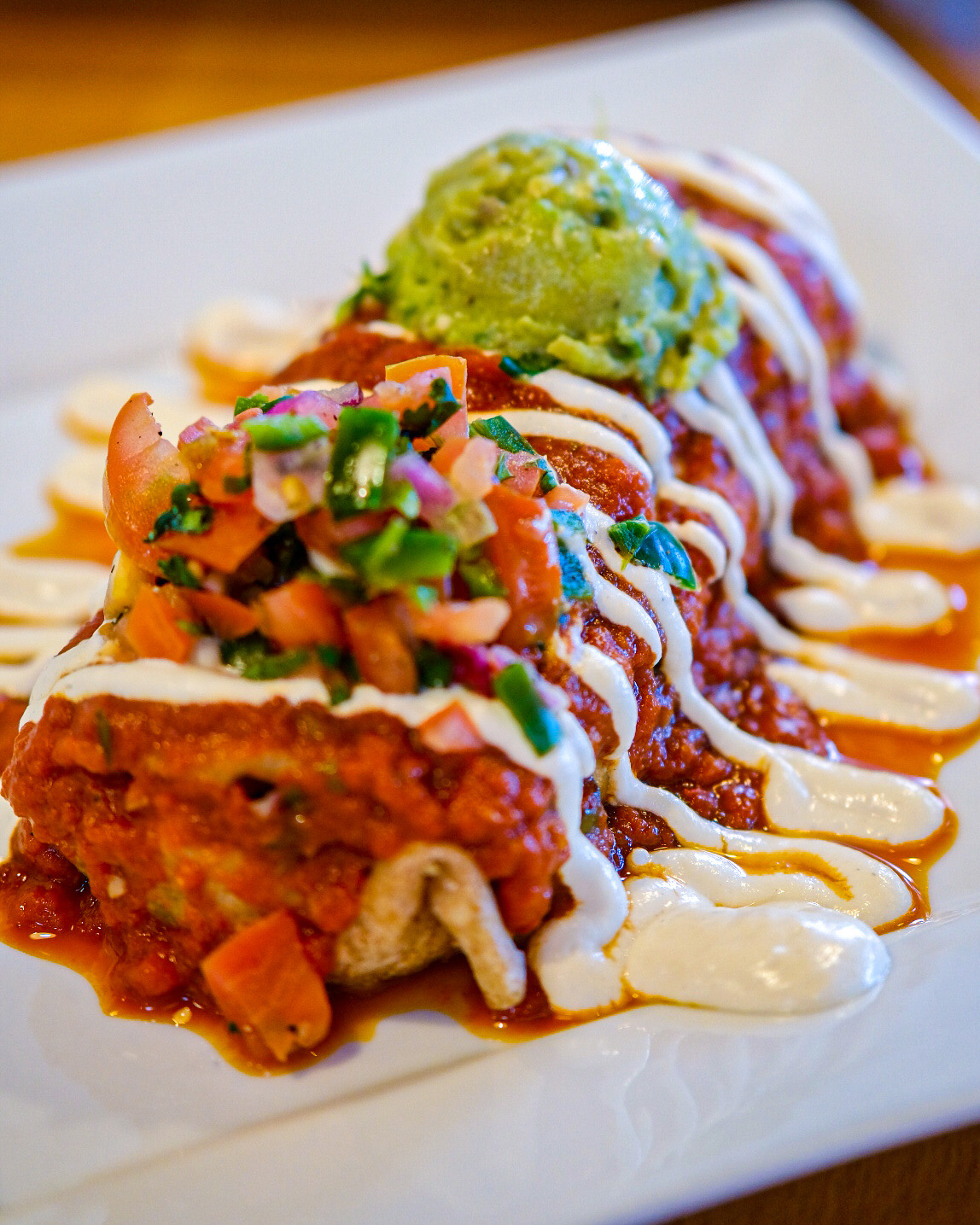 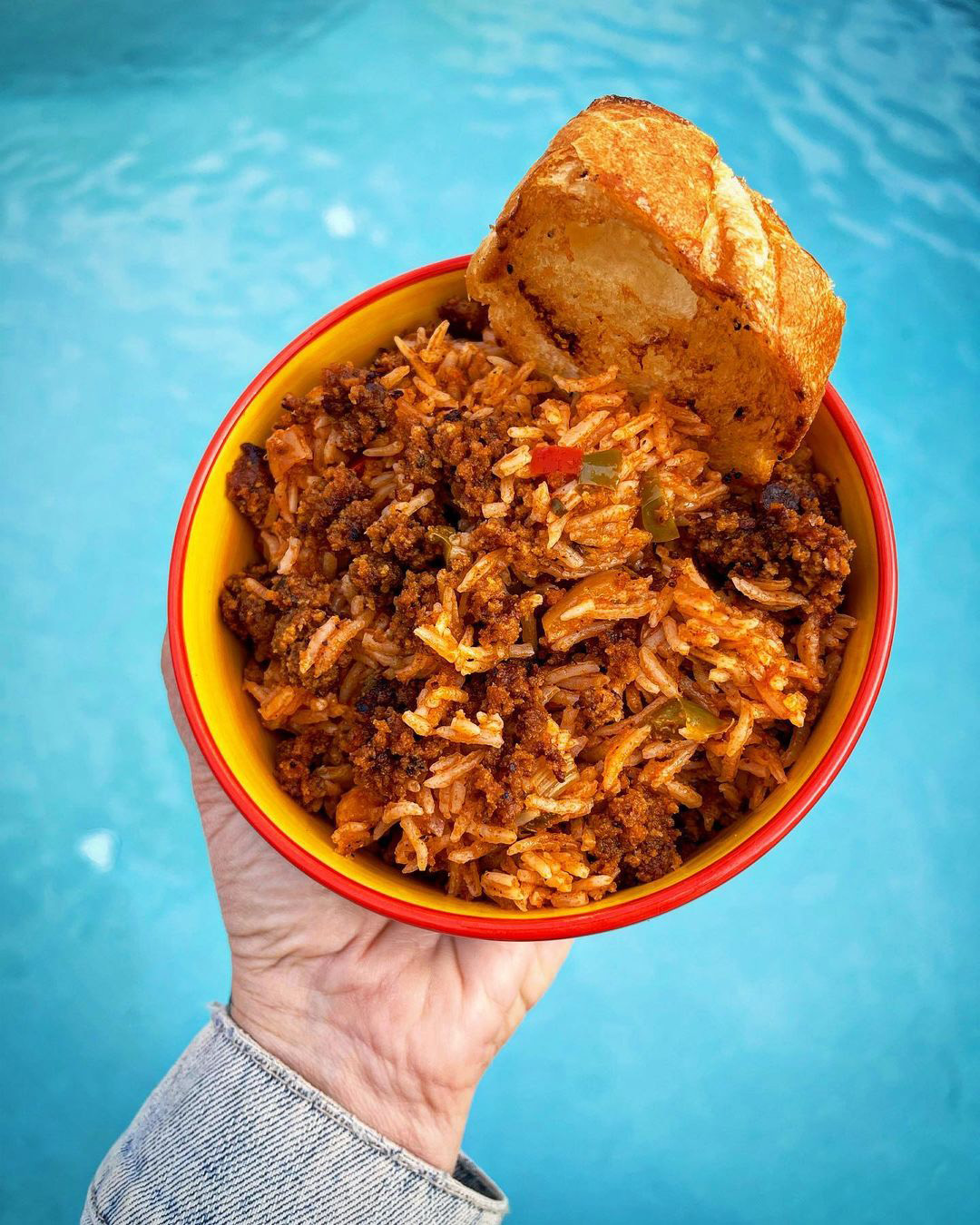 From the nachos, tacos, and burritos, to tamales and quesadillas, Chef Denise Vallejo’s Mexican food is made following traditional Mesoamerican techniques using the highest quality ingredients. Whatever you do, be sure to order Alchemy Organica’s house-made Cashew Quesillo to take home. 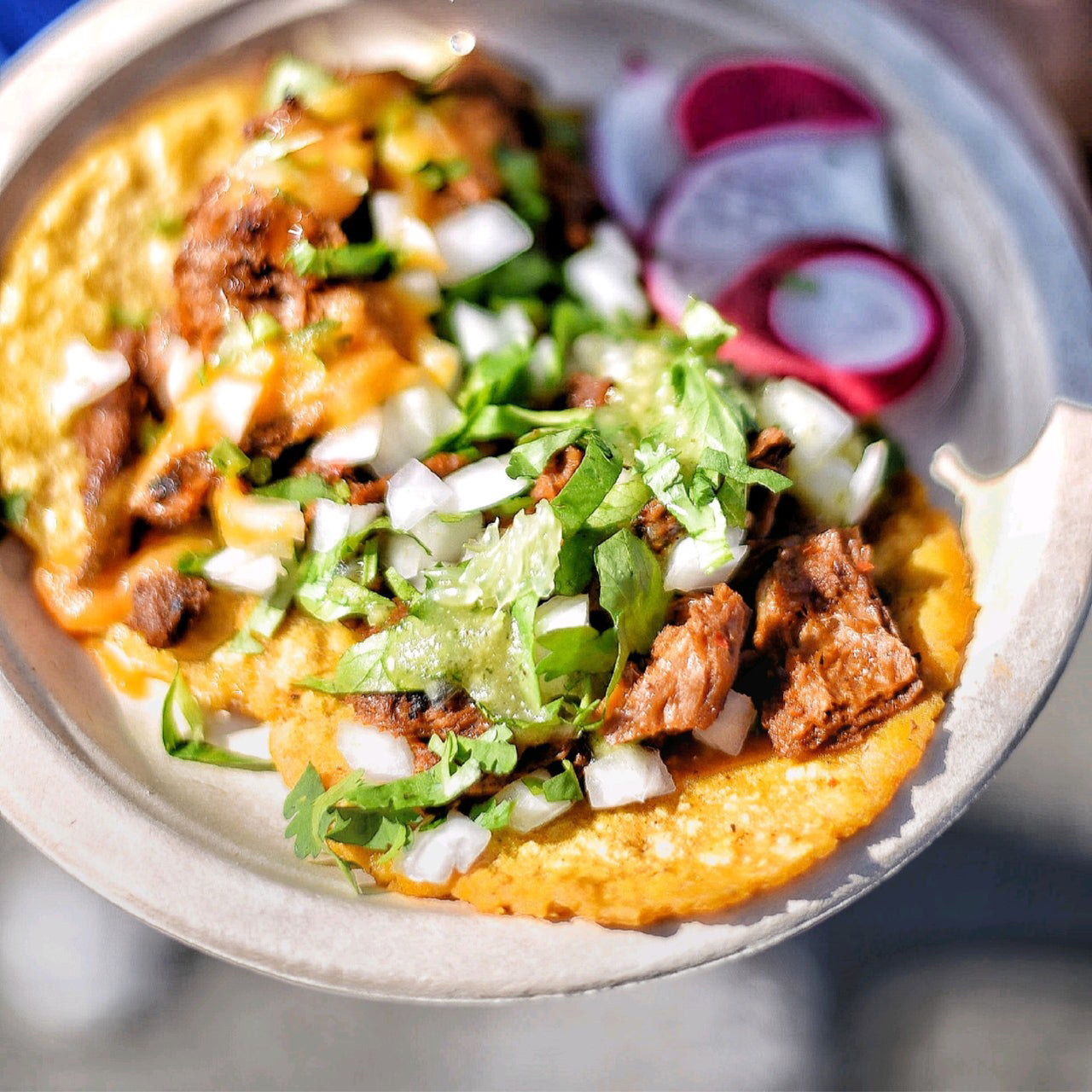 The Veg Outta the Box Tacos from this Latina-owned vegan restaurant are giving Jack in the Box a run for its money! Other standout dishes on the menu include the Buffalo Chick’n Ranch Wrap, Asada Nachos, and Bacon Cheeseburger.

The vegan wings from this Black woman-owned food truck will blow your mind! With a wide array of flavors and rubs from Buffalo to Lemon Pepper and Garlic Parmes’n, Drippin’ Wangz doesn’t hold back! 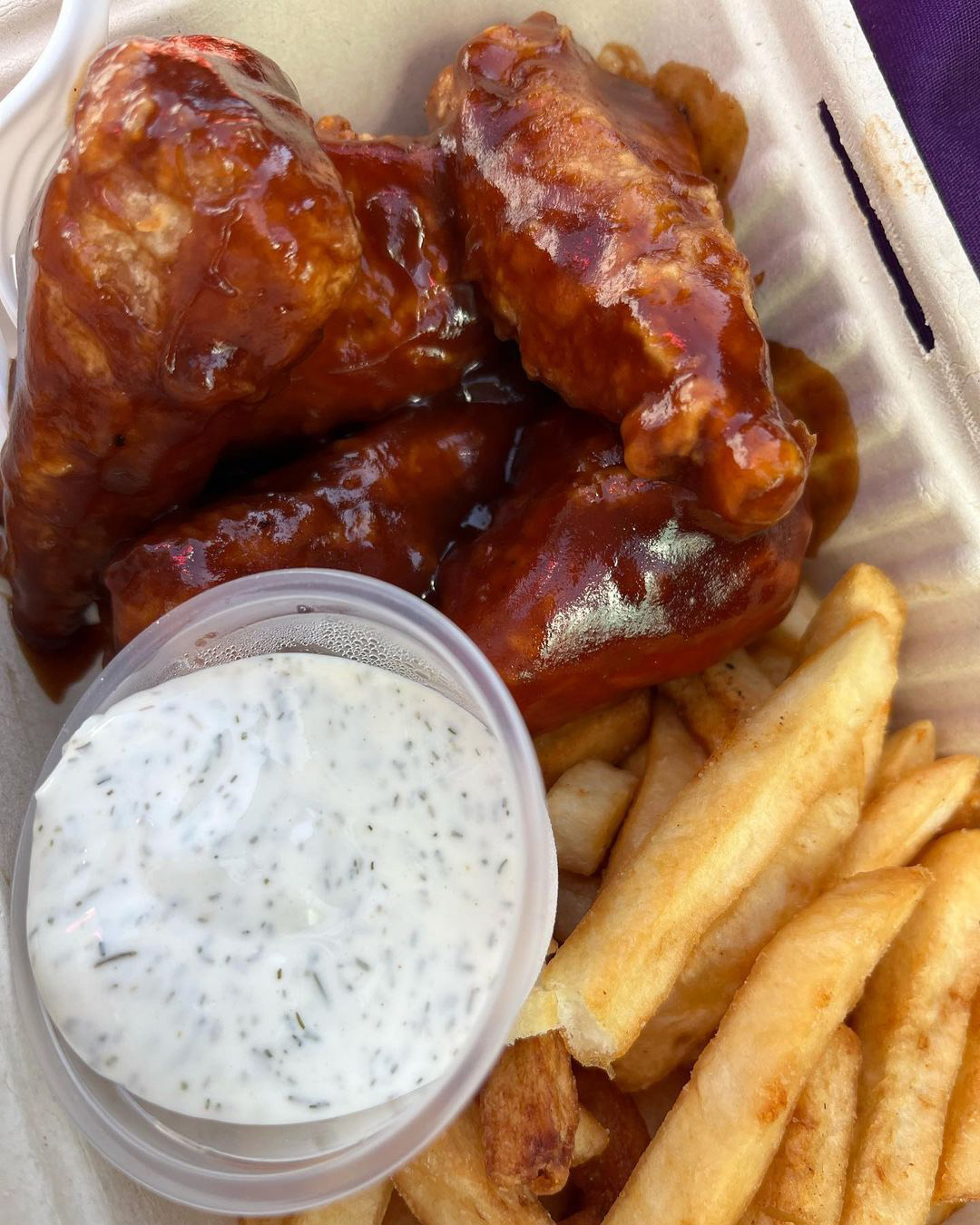 From pop-up to brick-and-mortar, The Wild Chive has been a hit among all foodies! With a menu of globally inspired comfort food dishes like Biscuits & Gravy, Breakfast Banh Mis, Southern Fried Chick’n Sammies, and Stuffed French Toast, The Wild Chive never fails to impress us. 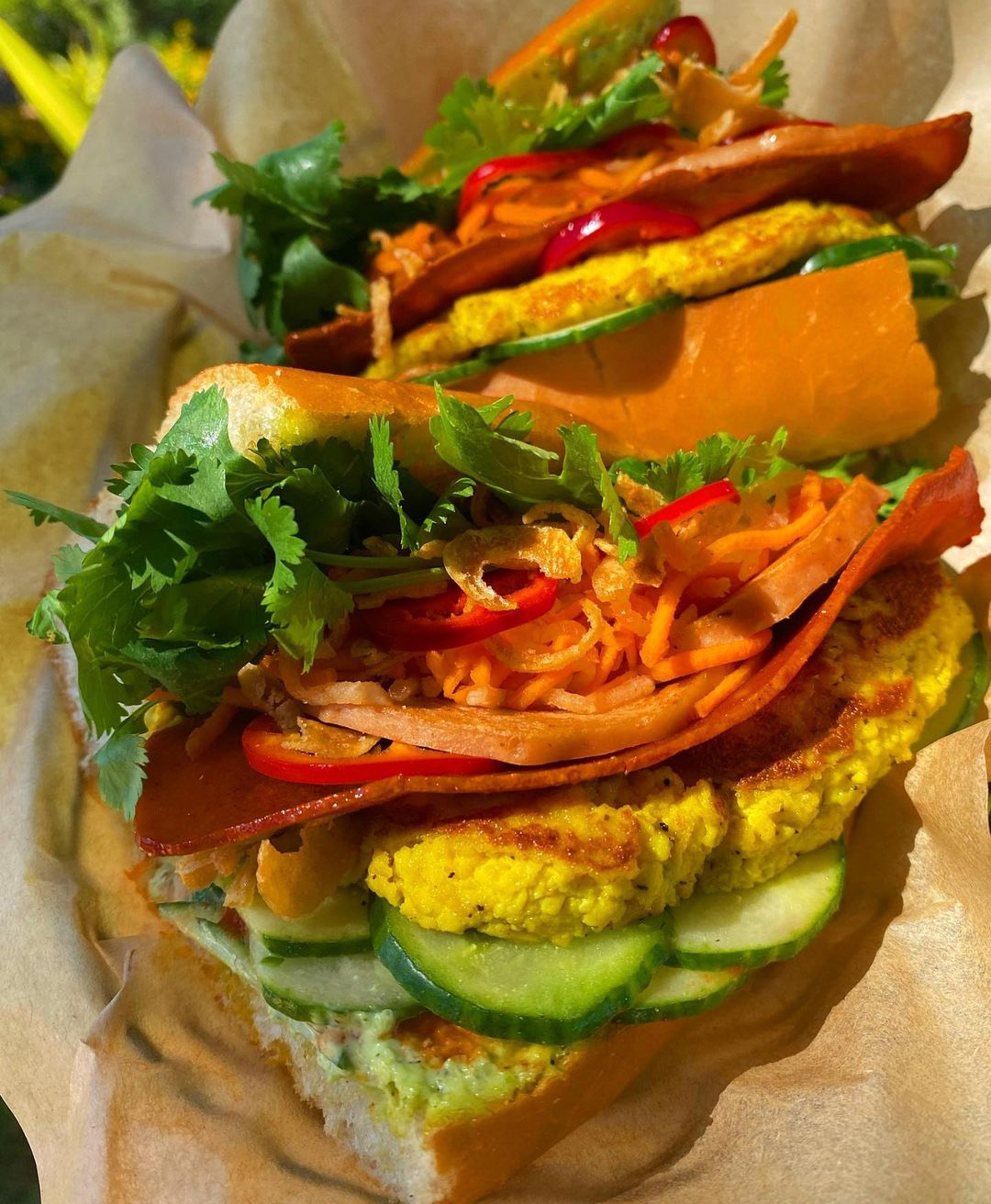 If you’re looking for good vegan sushi in Los Angeles, check out Plantae Bar at Smorgasburg LA! With options like rolls loaded with fried oyster mushrooms and jackfruit “crab” meat, you can kiss the days of ordering cucumber and avocado rolls goodbye. 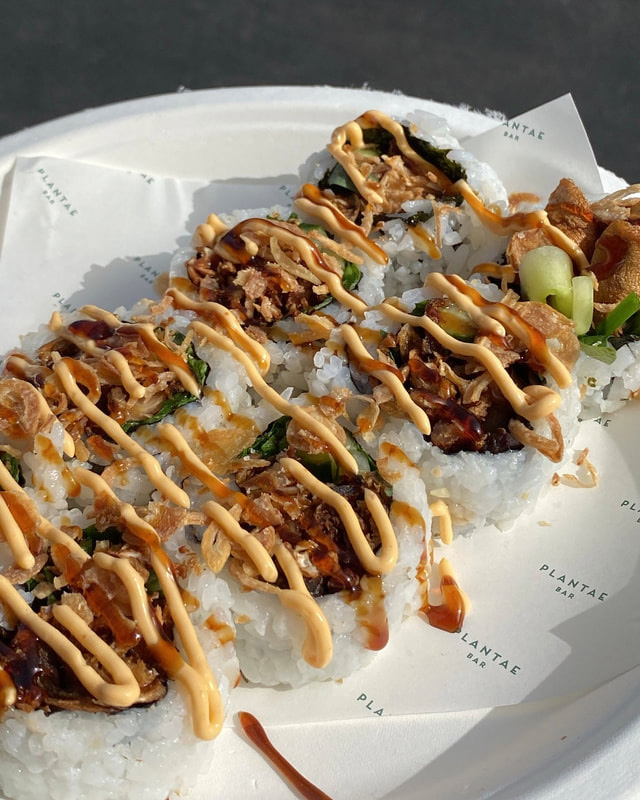 Starting with the drinks and apps all the way to the entrees and desserts, O’cado’s offerings are top-notch! Our recommendation? Stop by during happy hour and get a spicy margarita before going in on the Brussels sprouts, crispy Buffalo cauliflower, and whatever other dishes you’re in the mood for. 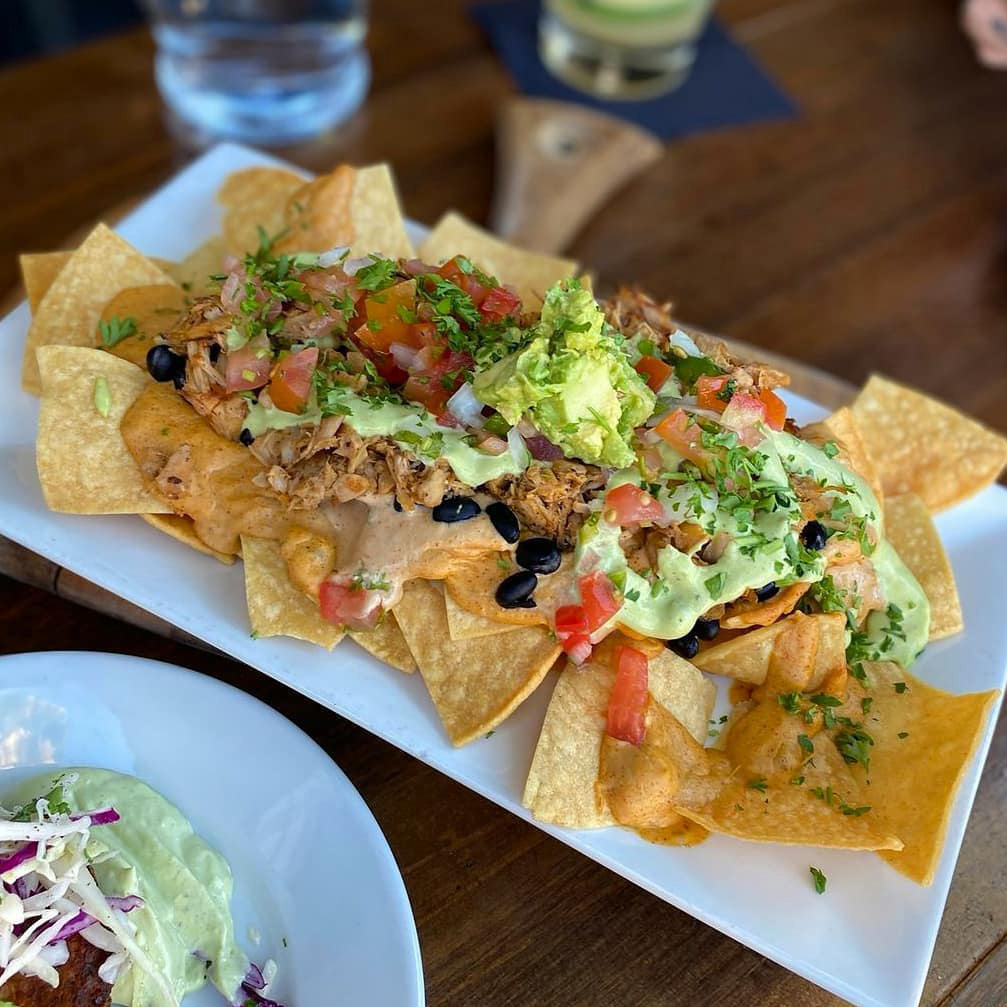 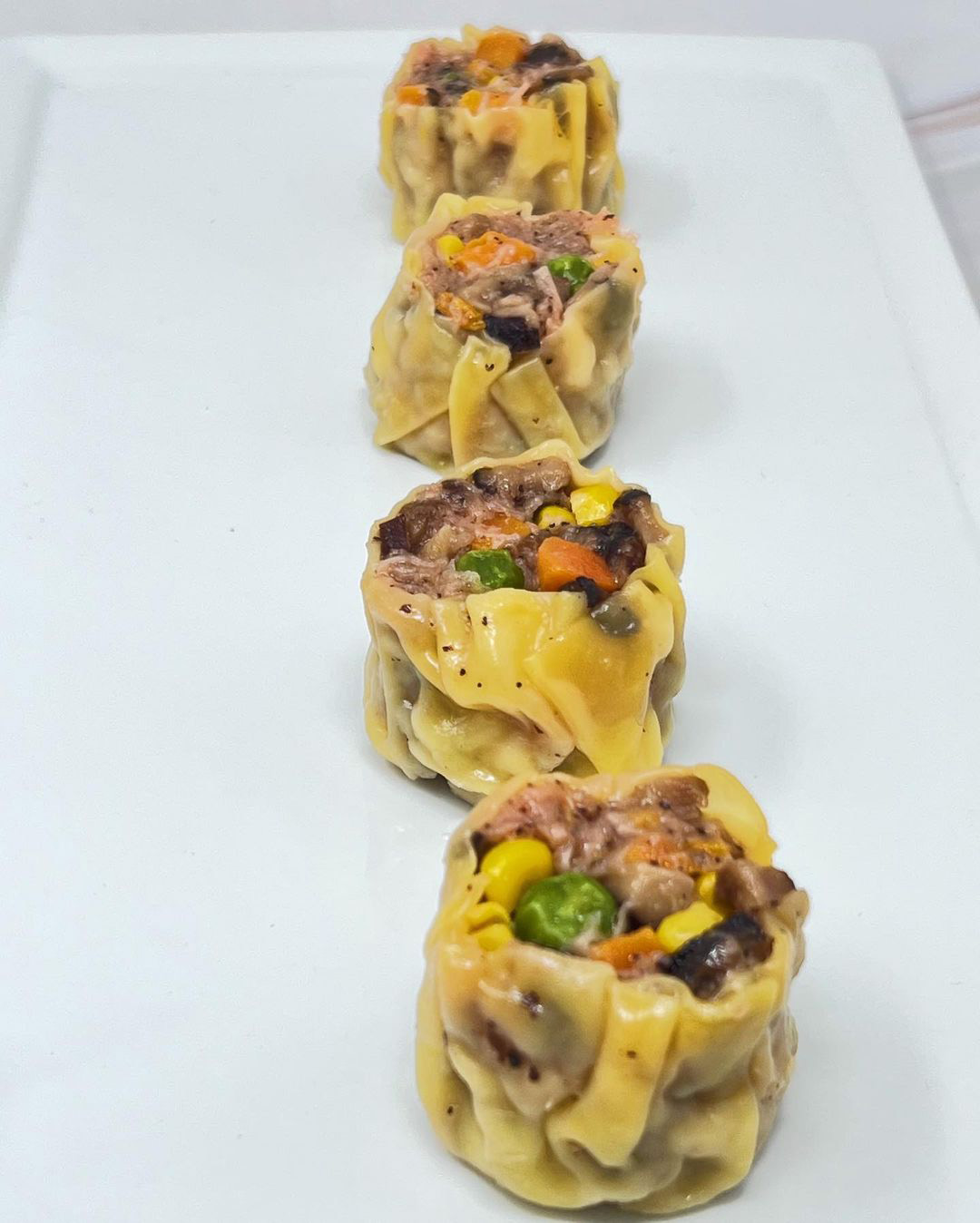 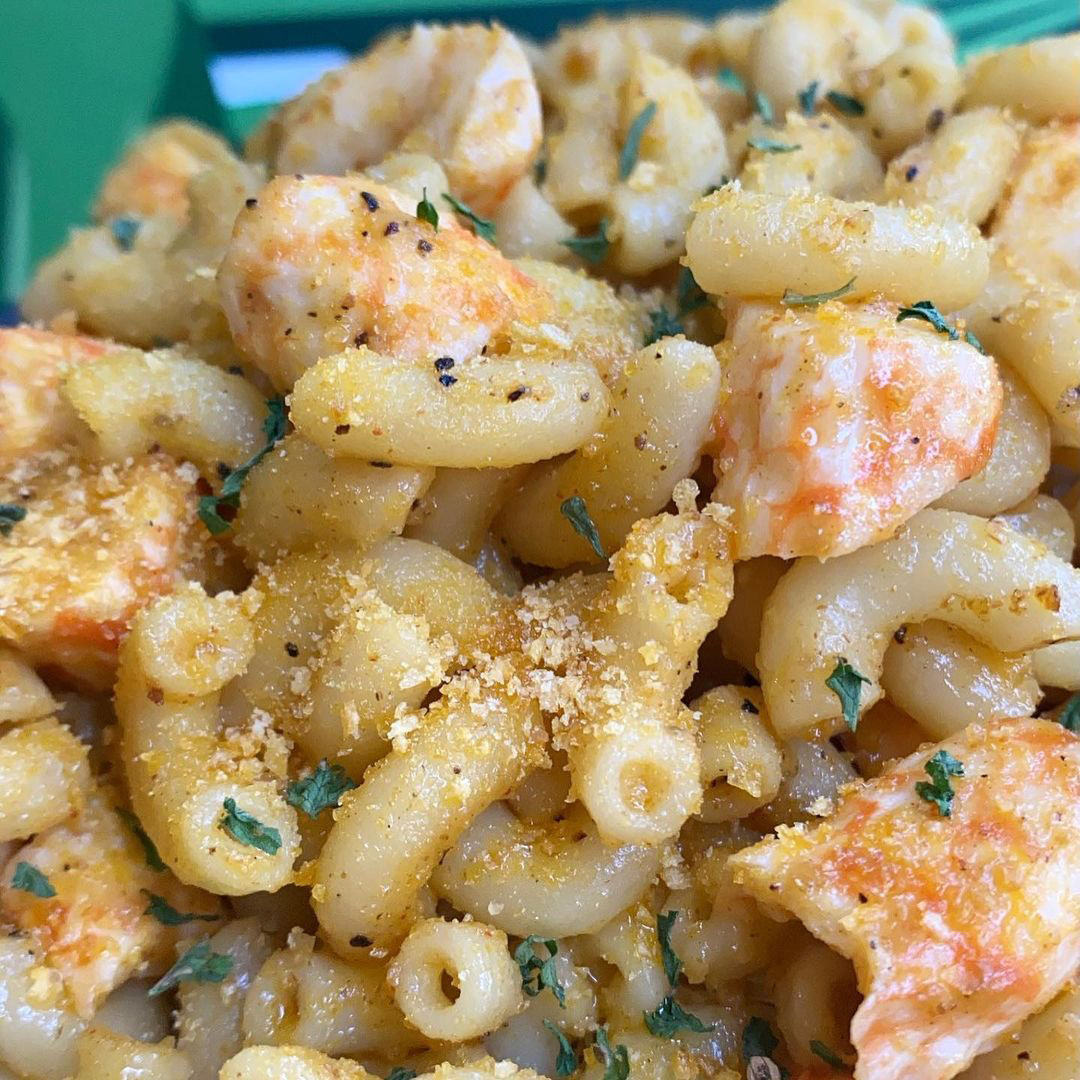 This new vegan food truck is making waves with its vegan Mexican cuisine! The menu features Birria, Pastor, Rajas, and Chicharrón protein options in tacos, nachos, burritos, and more. Don’t forget to order an agua fresca to wash it all down! 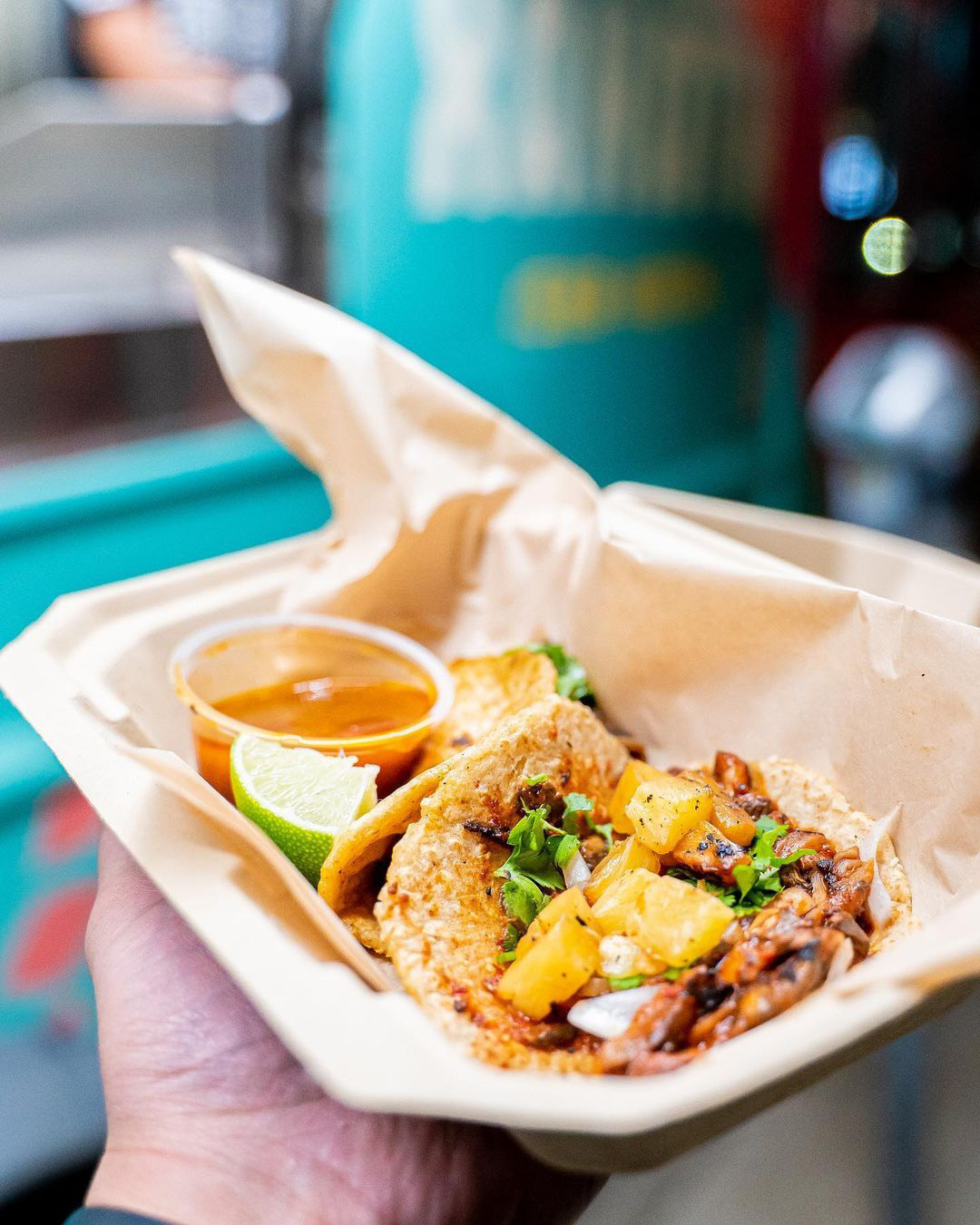