From pancakes and granola to chips and cheese sauce, there are so many great products to try from these businesses.

Did you just run out of coffee, chips, or granola? Before you go straight to Amazon, consider purchasing these items from a Black-owned business! By doing so, you’ll not only be supporting a smaller business and stocking your pantry with amazing new products, but you’ll also be showing up for a marginalized community that faces wealth inequality. Without further ado, here’s our list of 22 Black-owned vegan food brands to support right now and forever.

Better Chew is making waves in the plant-based world with its portfolio of mind-blowing meat alternatives! From sausage, fried fish, and shredded steak to fried chicken, ribs, and meatballs, each protein offers a realistic flavor and texture that will win over your most skeptical friends. Better Chew’s products are made by its parent manufacturing company, Something Better Foods, which is also Black-owned. 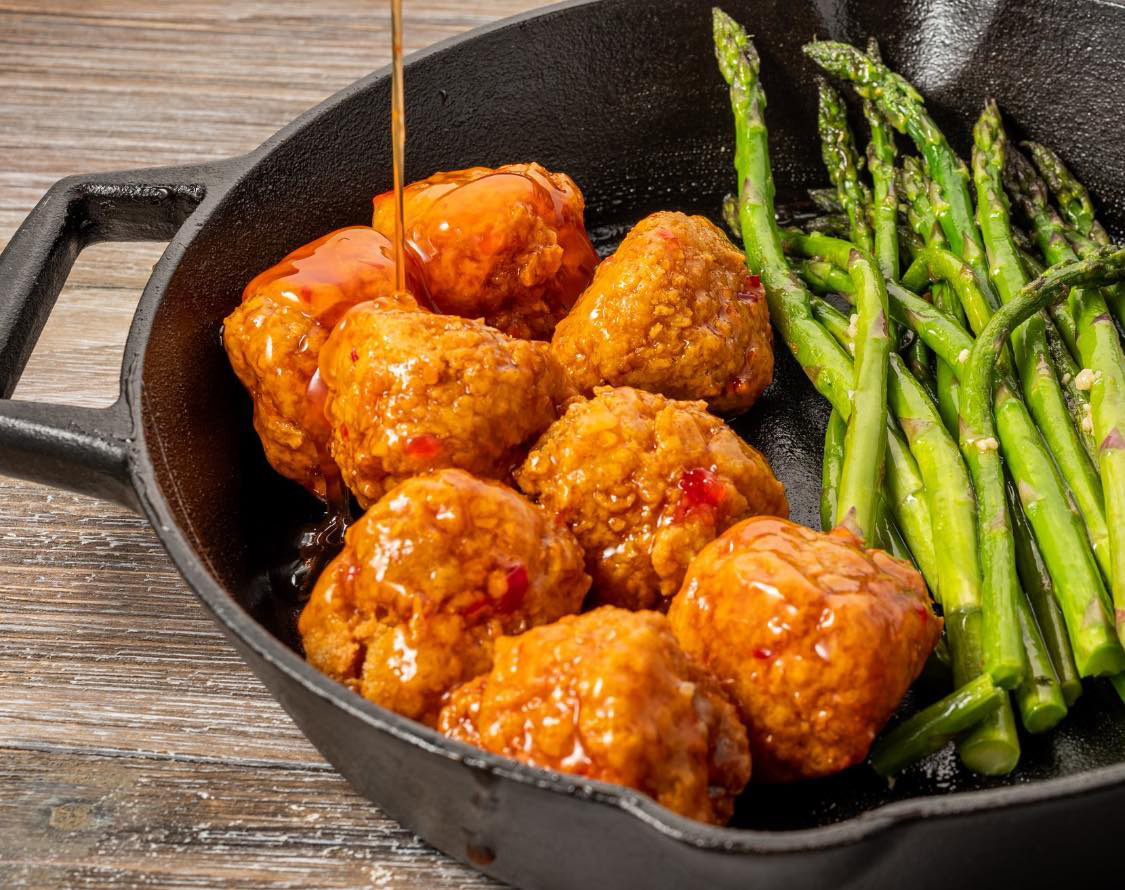 The cashew and almond-based cheese dips from Misha’s Kind Foods will have you hooked at first bite! With a plethora of melodious flavors using hints of sun-dried tomatoes, cilantro, habanero, roasted carrots, and black truffles, Misha’s Kind Foods does vegan cheese right! 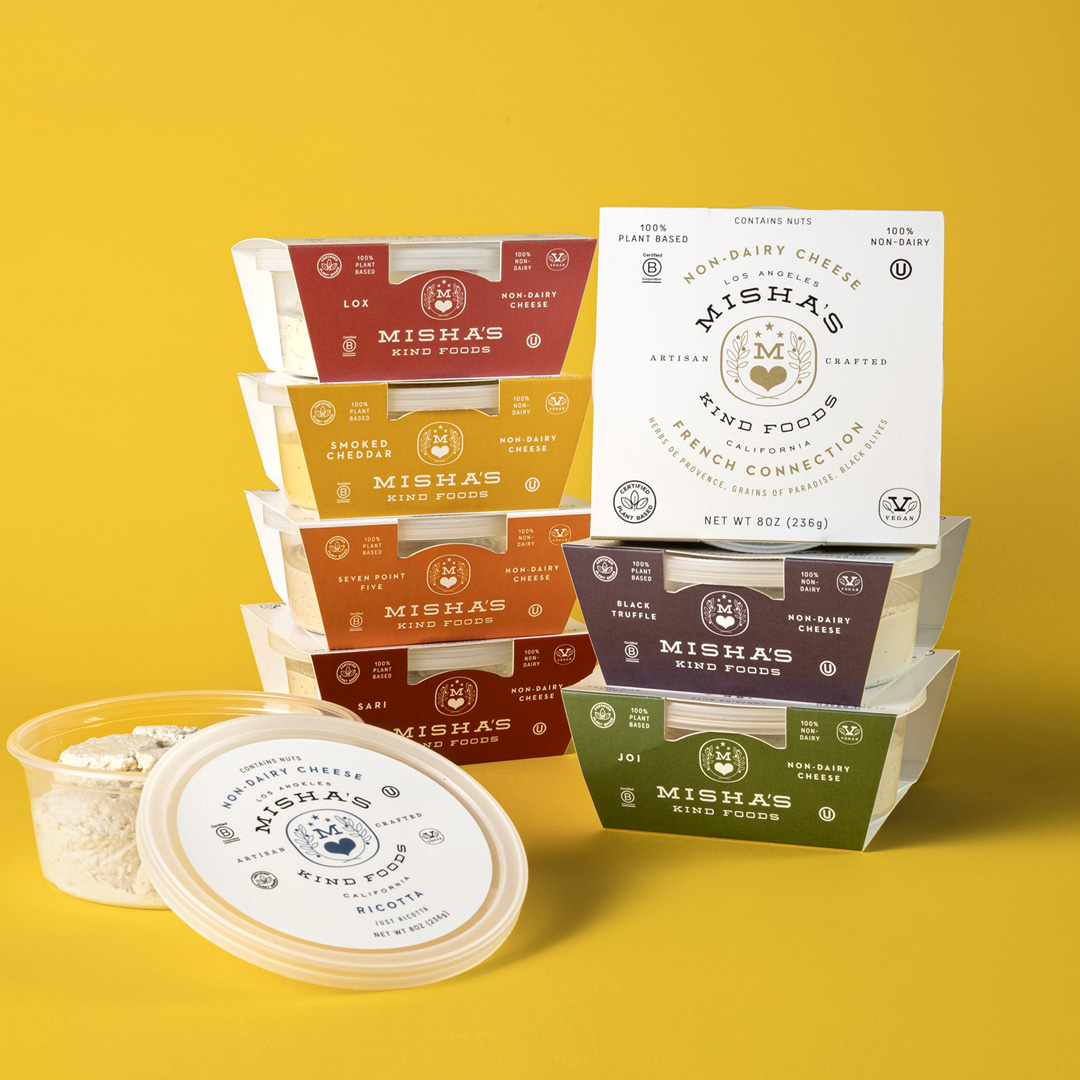 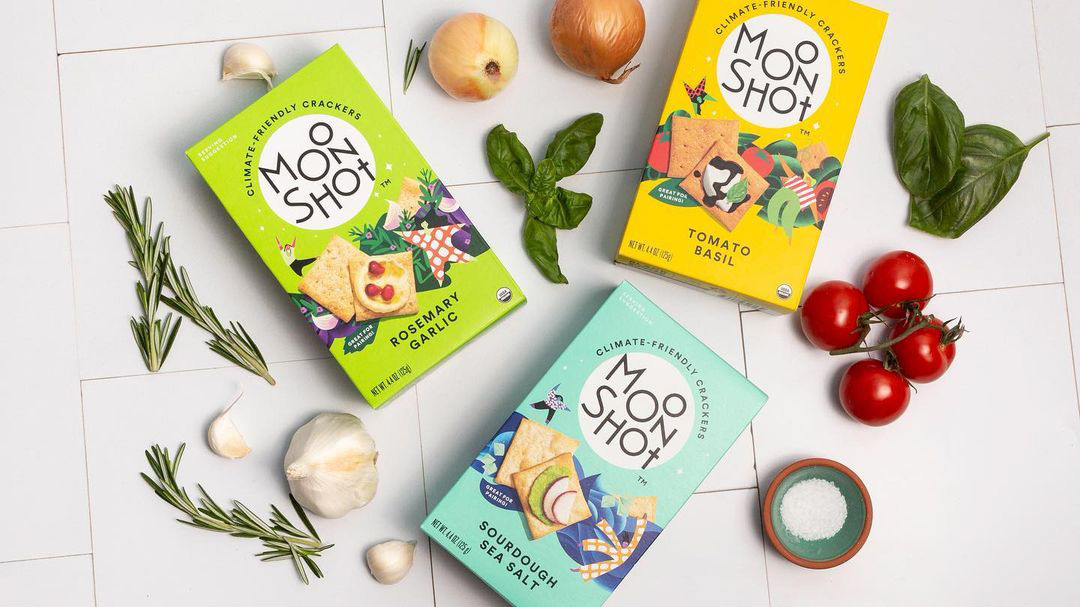 Trade Street Jam Co. was created by Ashley Rouse in her tiny apartment on Trade Street in North Carolina. These jars of fruity goodness feature innovative ingredients that will take your PB&Js to the next level. From Smoked Peach and Sour Cherry Ginger to Blueberry Lemon Basil and Plum + Rose, there are so many spreads to choose from! While you’re at it, order a few bottles of Raspberry Hot Sauce to test out in your favorite dishes. 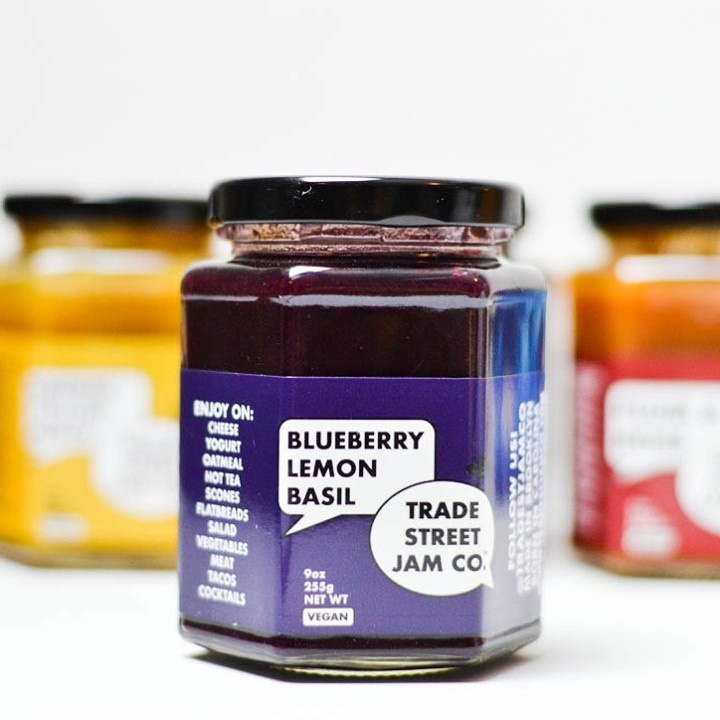 Are you bummed that traditional marshmallow fluff isn’t vegan? Funky Mello is your new best friend! The Austin-based vegan food brand offers vegan Marshmallow Creme in three flavors—Vivacious Vanilla, Satisfying Strawberry, and Creamy Cookie. Spread it on a peanut butter sandwich, dollop it on chocolate cupcakes, or eat it by the spoonful! 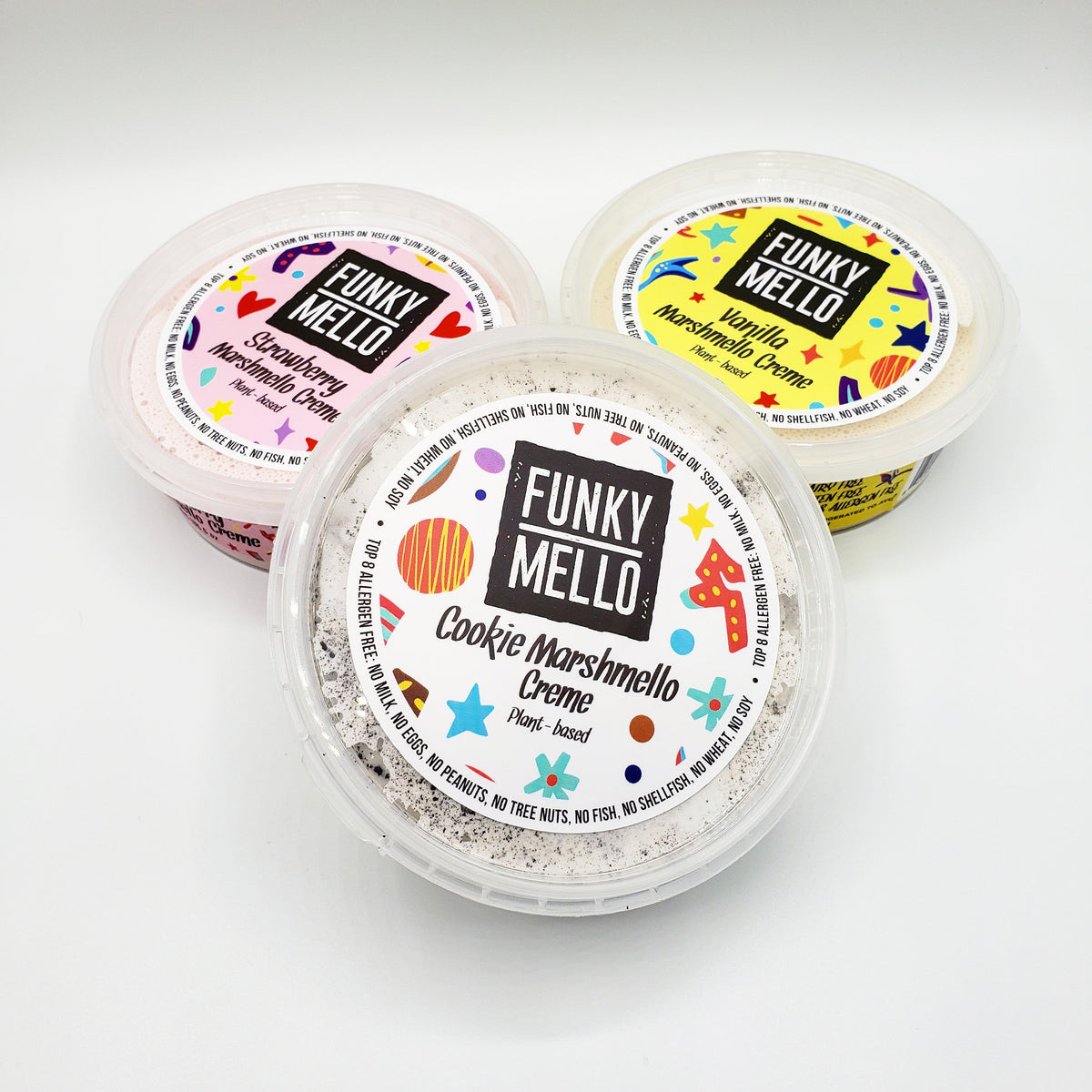 You’ll never look at popcorn the same after you try the dreamy vegan flavors from Pop of Inspiration! We’re talking about S’mores, Birthday Cake, Cinnamon Bun—and even Spicy Taco popcorn. Everything is vegan and soy-free with gluten-free options. 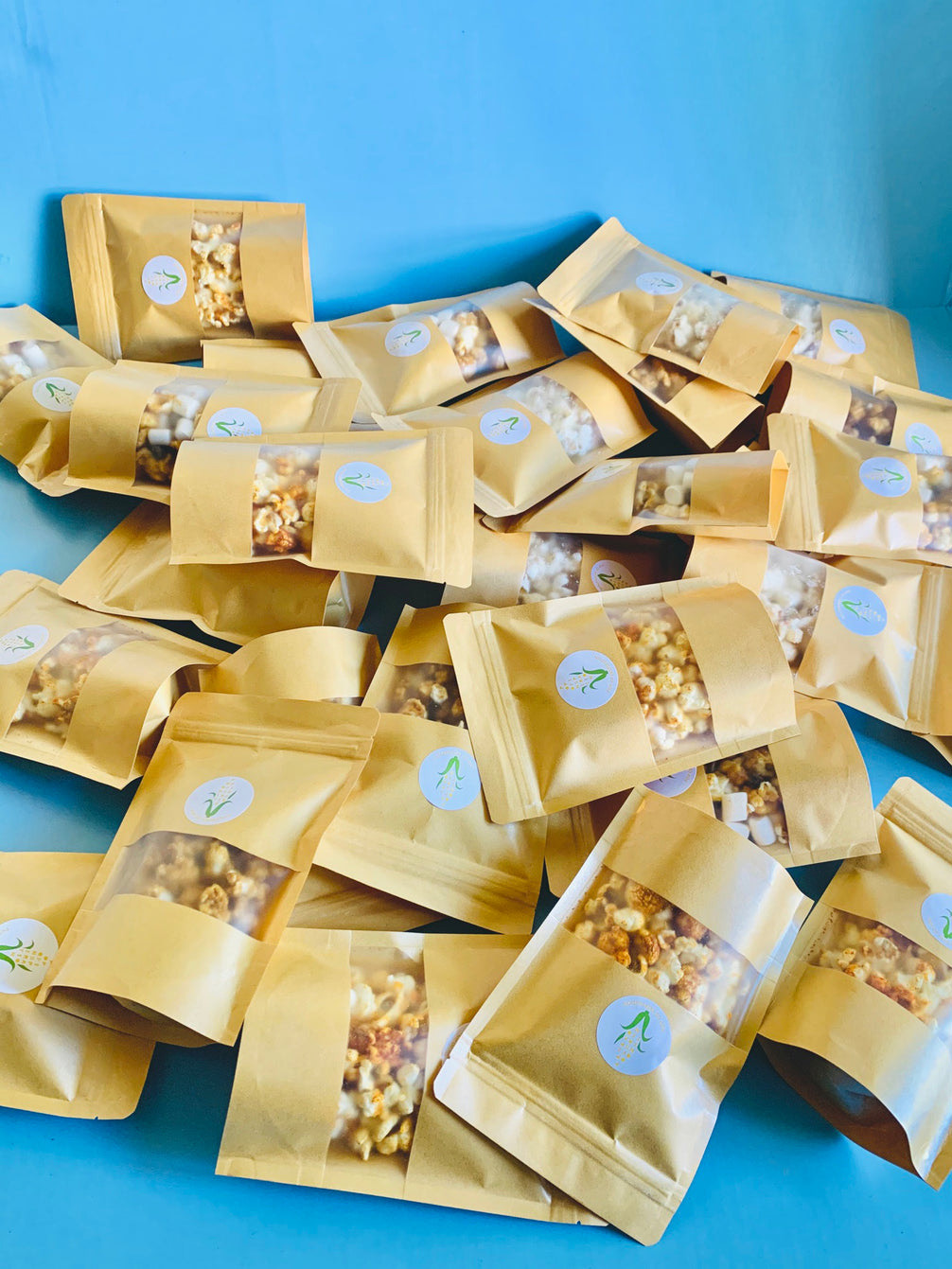 Photo courtesy of Pop of Inspiration

Store-bought vegan cookies that check all of the boxes are hard to come by, but No Cookie passes the cookie test with flying colors. In the flavors of Chocolate Chip, Oatmeal Raisin, Peanut Butter, Island Coconut, and Ginger Spice, the cookies from this Black-owned cookie brand are golden and crispy on the outside but chewy and sweet on the inside! 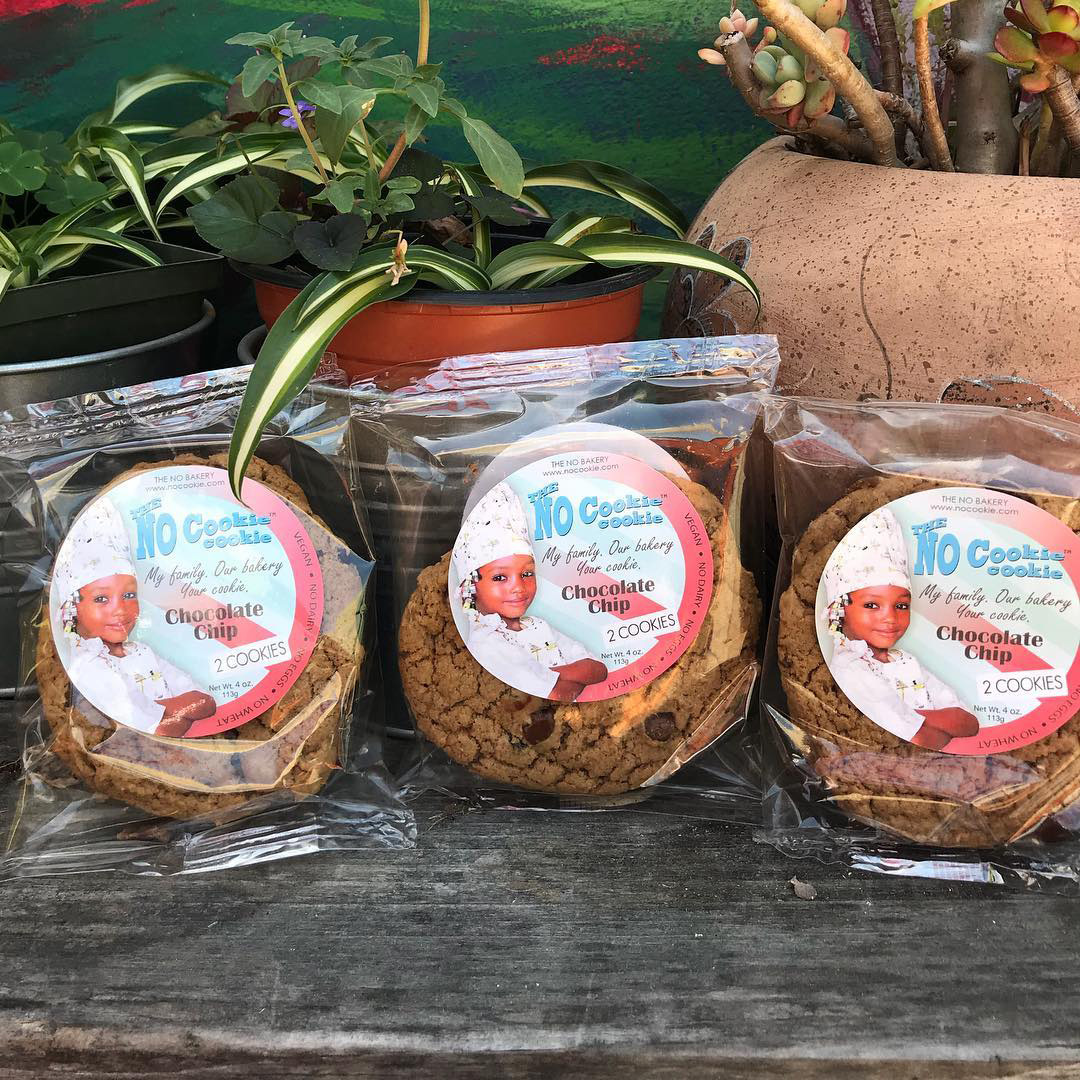 Whether you’re attending a holiday potluck, need a quick meal for your family, or just want a glorious serving of noods, Mac & Yease is the move! This baked mac ‘n’ cheese is based on a recipe created by Chef Ayindè’s great-grandmother. Sold in trays at select Costco stores in Southern California and online for nationwide delivery, Mac & Yease is the answer to all of your creamy, cheesy prayers. 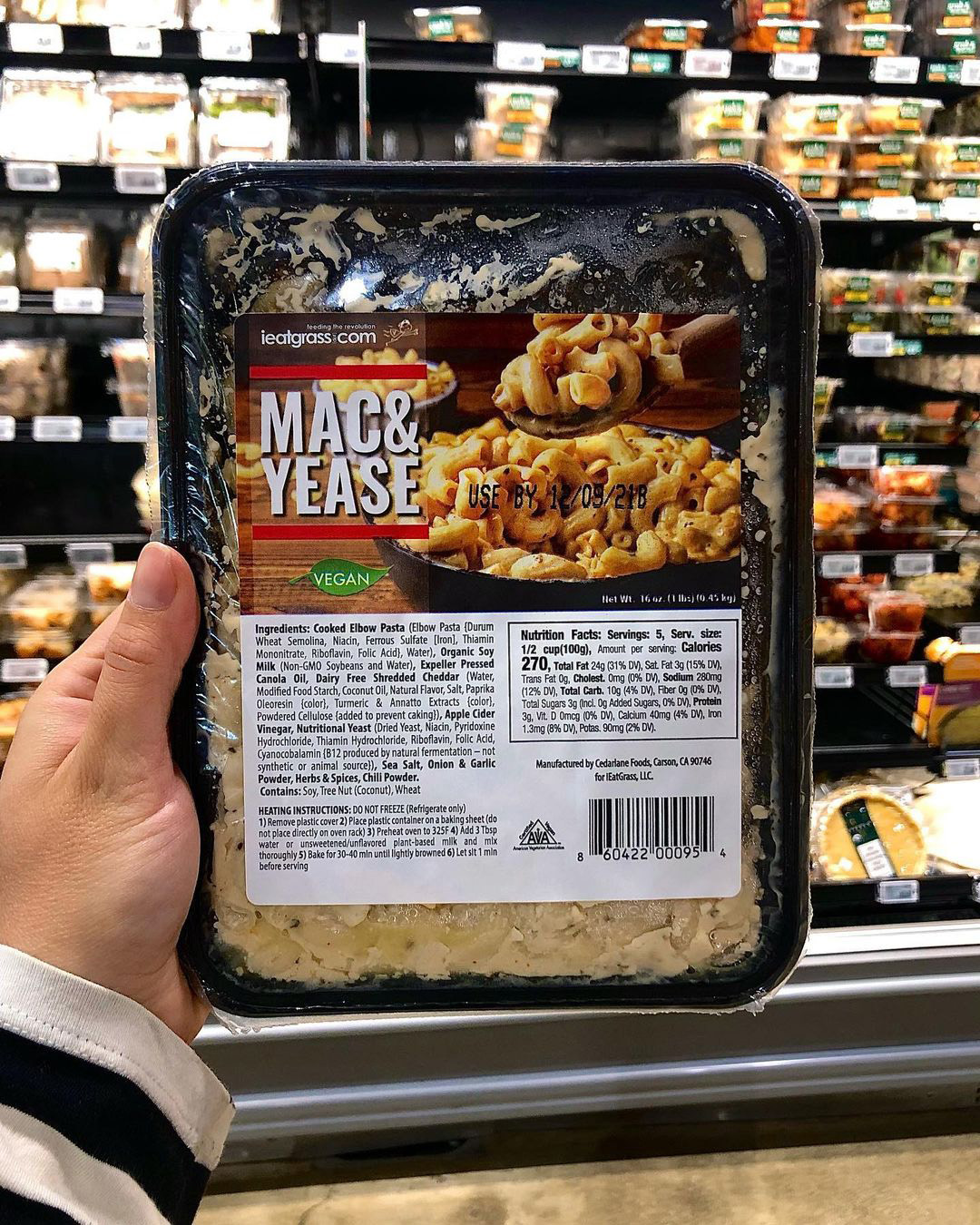 Azzizah Rahim made the recipe for this vegan superfood popcorn several years ago when she was looking for a healthy on-the-go snack. From debuting at a drum circle in Los Angeles’ Leimert Park to launching at stores across the country, Azzizah’s Herbal Green Popcorn has been quite a success. You can now find it in Smoked Cheddar & Lime and Original Savory Cheddar varieties. 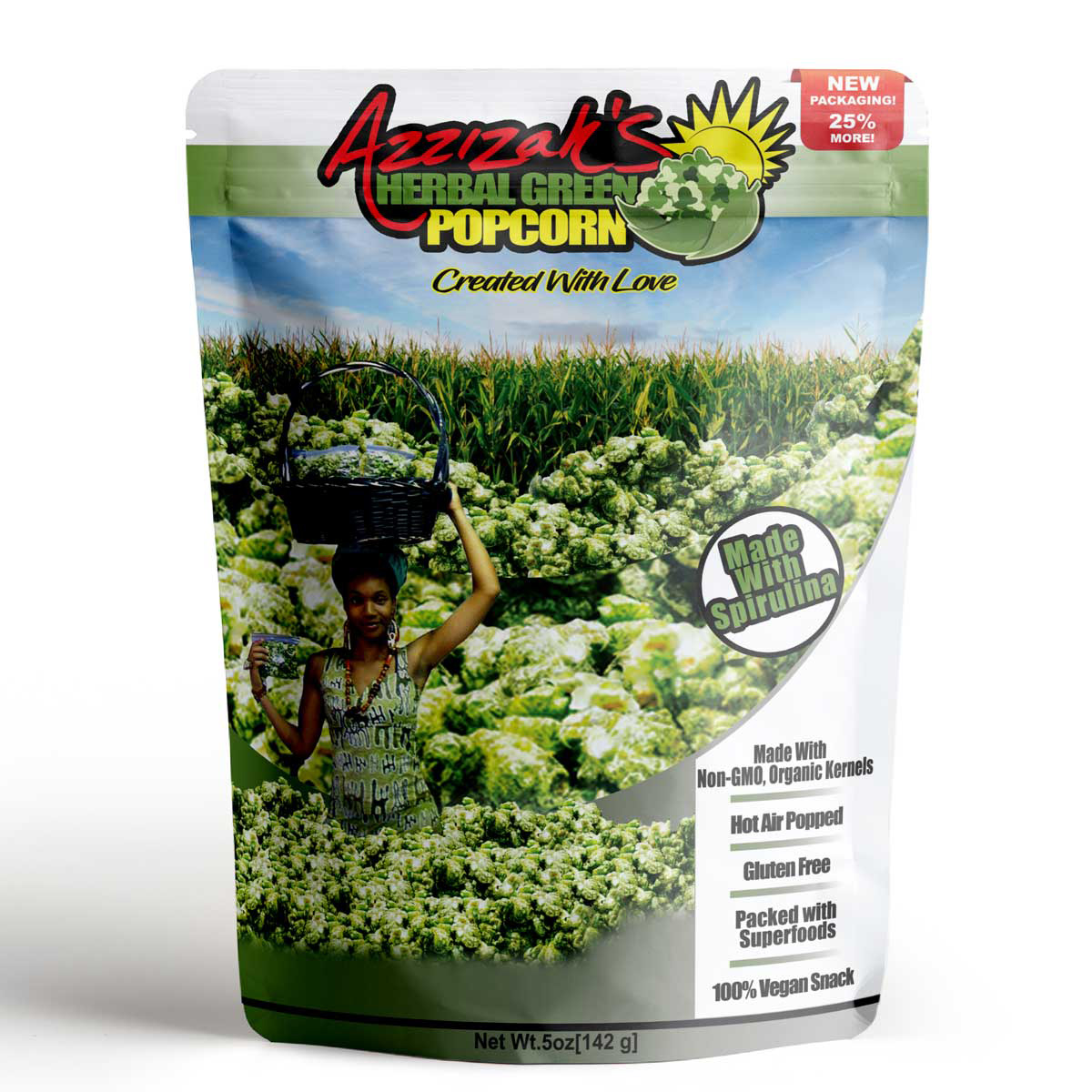 This creamy, drool-worthy Notcho Cheez from Mylk Dog is just what you need for your next get-together! It’s vegan, gluten-free, soy-free, and made with just eleven ingredients. Whether you’re making nachos, tacos, chili cheese dogs, or pizza, this cheese sauce is sure to take your meal to the next level. 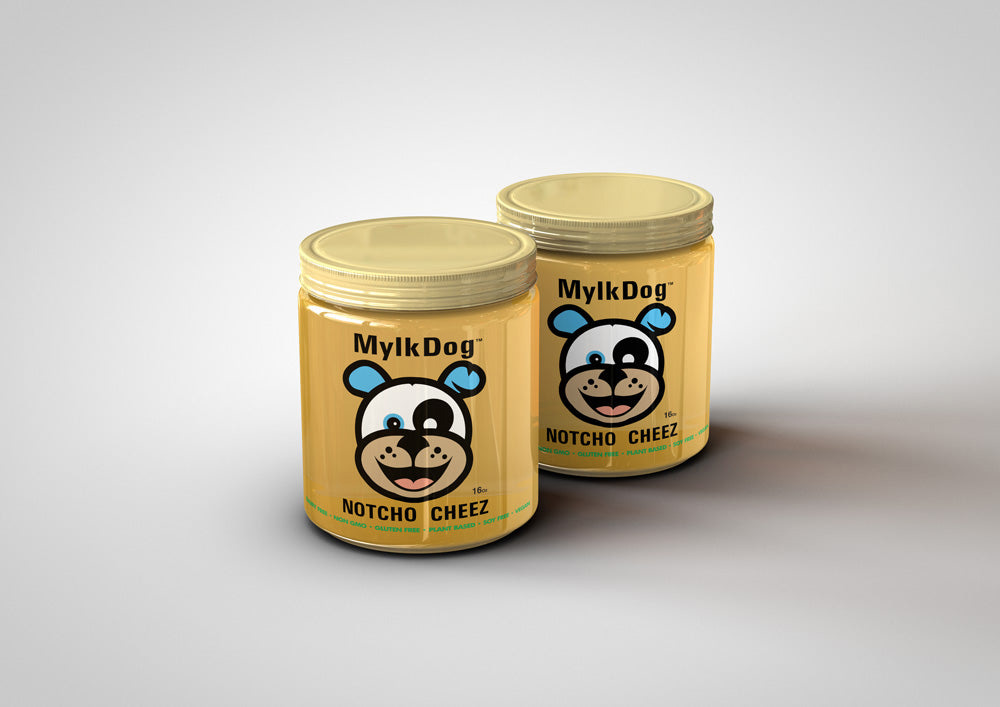 After airing on Shark Tank, this vegan food brand blew up—and rightfully so! Atlas Monroe first gained popularity for its original vegan fried chicken patty, but now they have so many other plant-based products to try. Apple Wood-Fired Ribs, Vegan Cured Bacon, Extra Crispy Chick’n Strips in light and dark meat varieties, Loaded Mac N Cheese, Lasagna, and Sweet Potato Loaf Cakes are just a few of the foods you can order from Atlas Monroe. 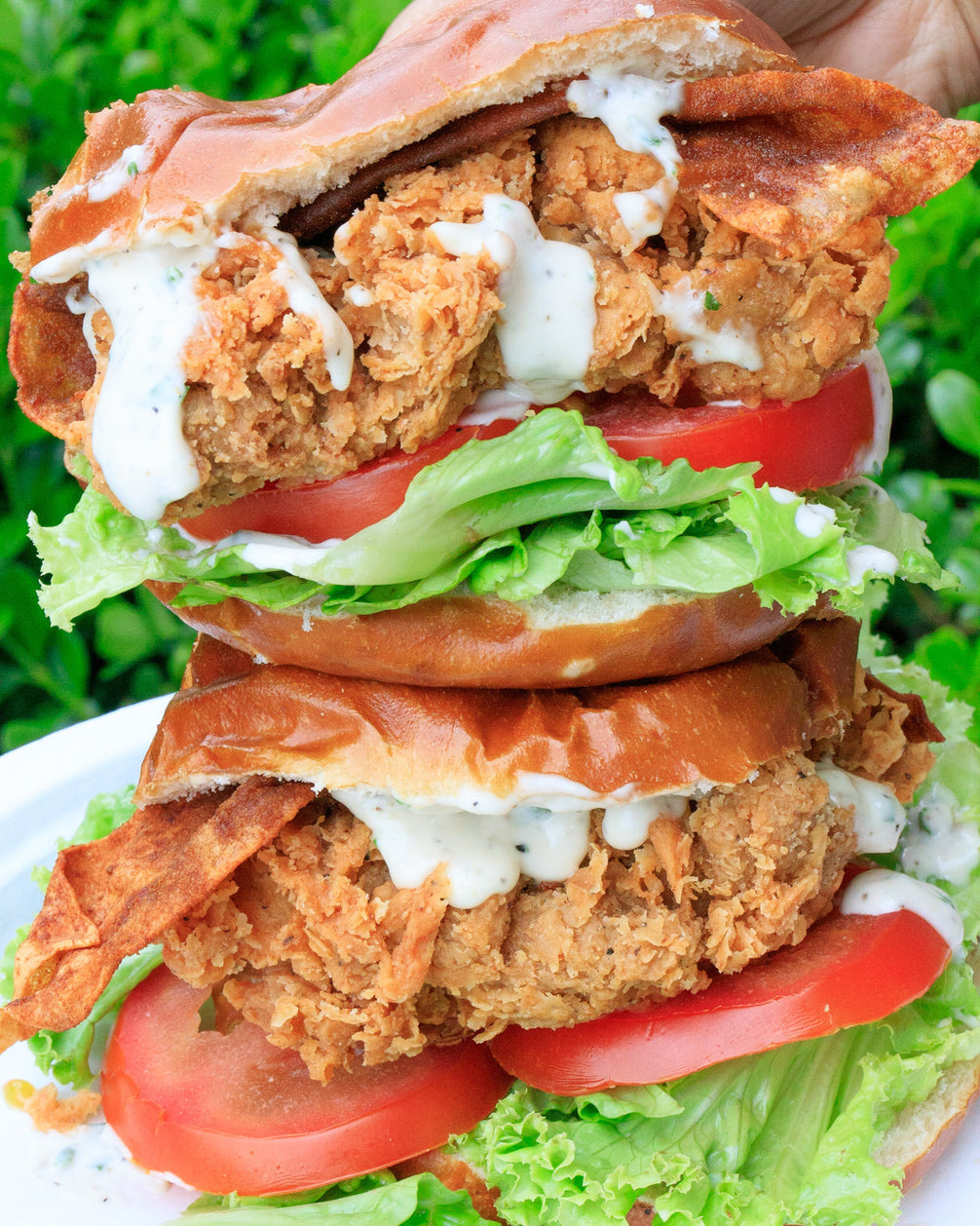 Due to a lack of accessibility and representation, the wellness community hasn’t always been the most welcoming to BIPOC. Plantmade was founded to help bridge that gap. In addition to selling vegan protein powder, vitamins, gummies, and merch designed for people of color, Plantmade hosts a podcast titled Black Voices in Health, and organizes community events to create a safe space for Black people in the fitness industry. 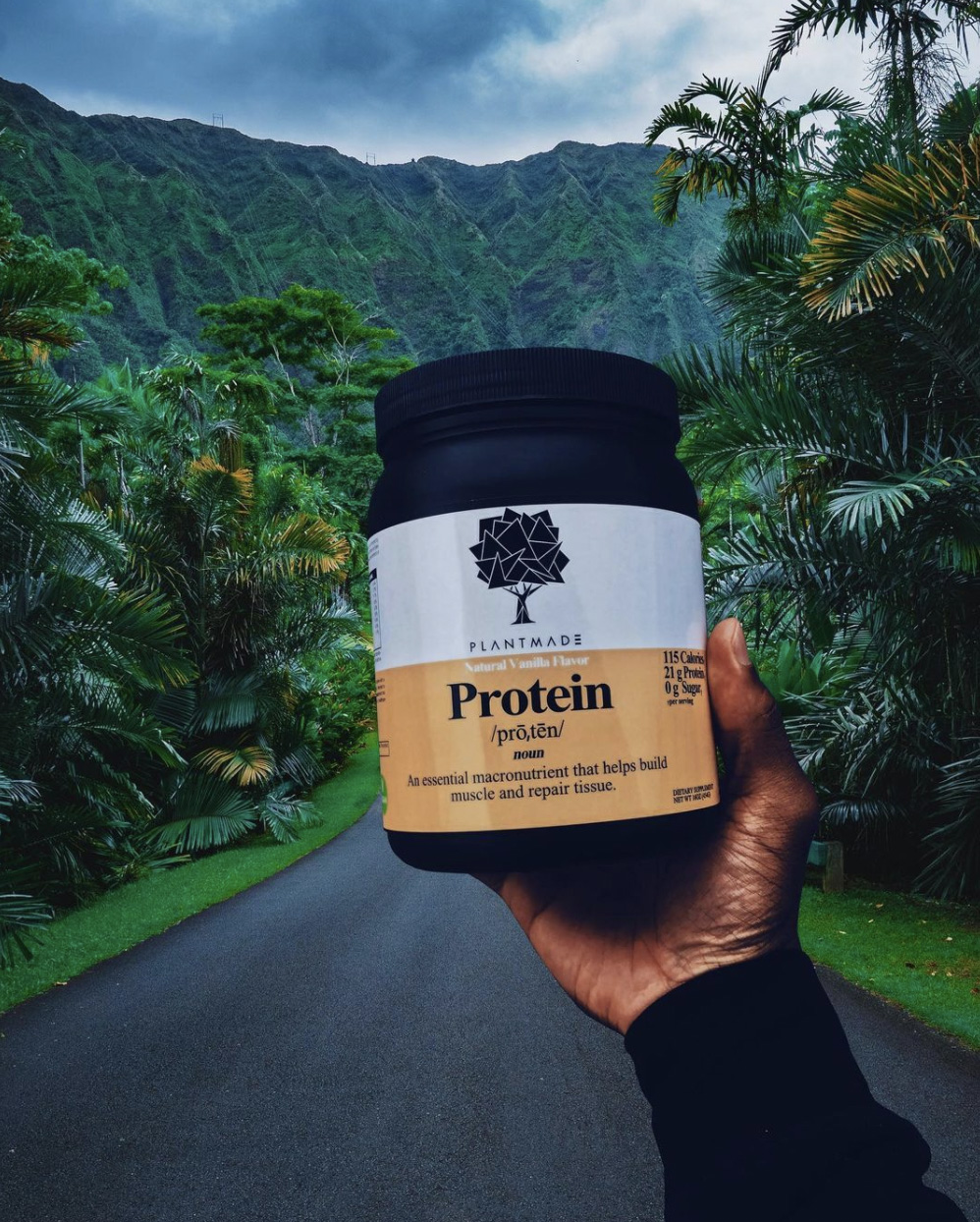 Want to make the ultimate smoothie bowl at home? Jakera & Co. makes vegan oat butter and granola in some seriously unique flavors that make for great toppings. Just imagine digging into a bowl loaded with Organic Cinnamon Roll Granola and Vanilla Almond Oat Butter. Now quit imagining and order some for yourself to see what the hype is all about. 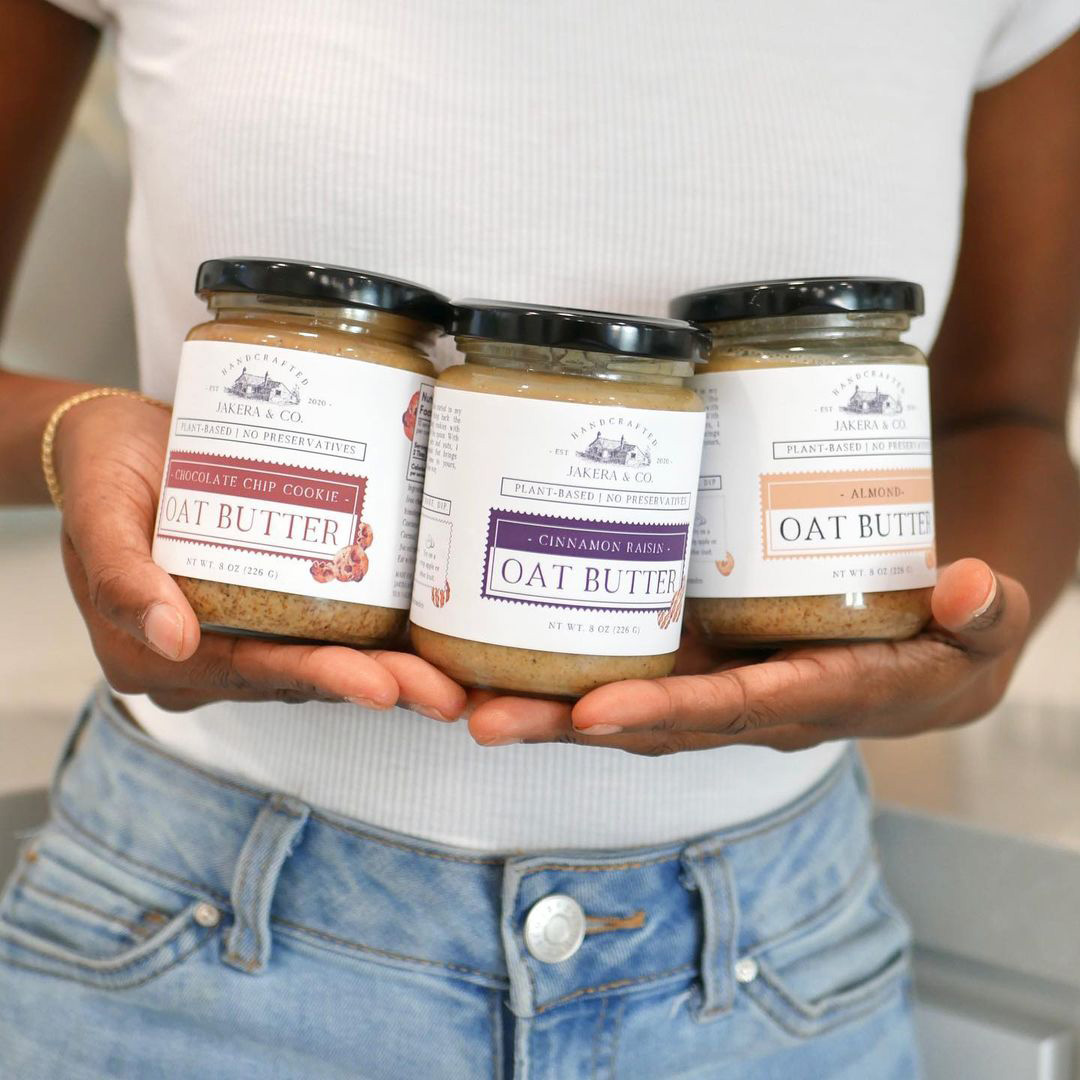 Calling all latte lovers! Golde has a variety of superfood drink mixes to make your next latte. There are Matcha, Turmeric, and Cacao Turmeric blends, as well as other health and wellness products such as a vegan collagen booster and mushroom supplement. 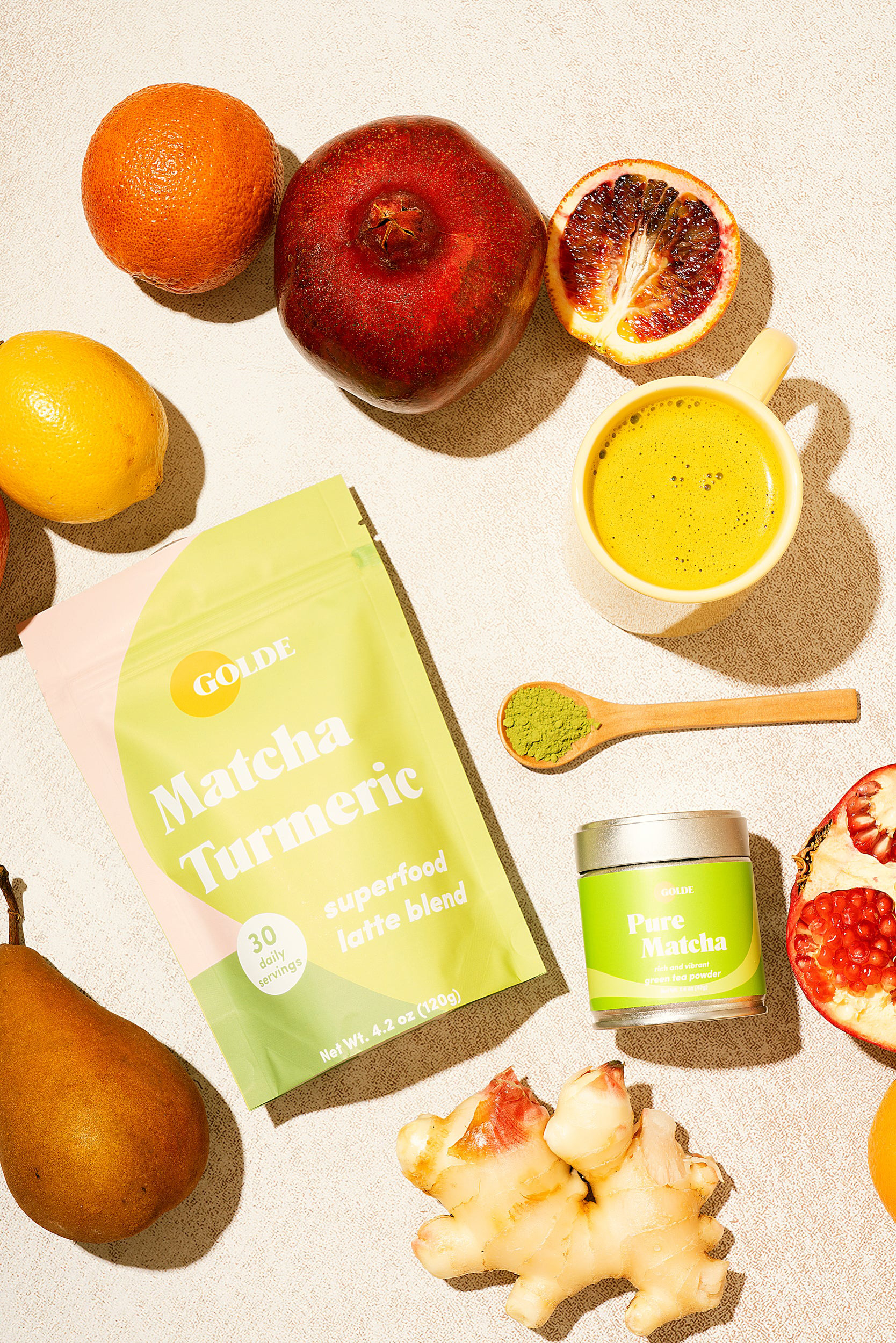 For those of you unfamiliar with fonio, it’s a tiny ancient grain (similar to couscous or rice) that’s native to Africa. It’s easily digestible, loaded with nutrients, and supports the economy and agriculture in West Africa. At Yolélé Foods, they offer traditional fonio and fonio flour as well as chips and pilafs so you can get your grains in however you please! 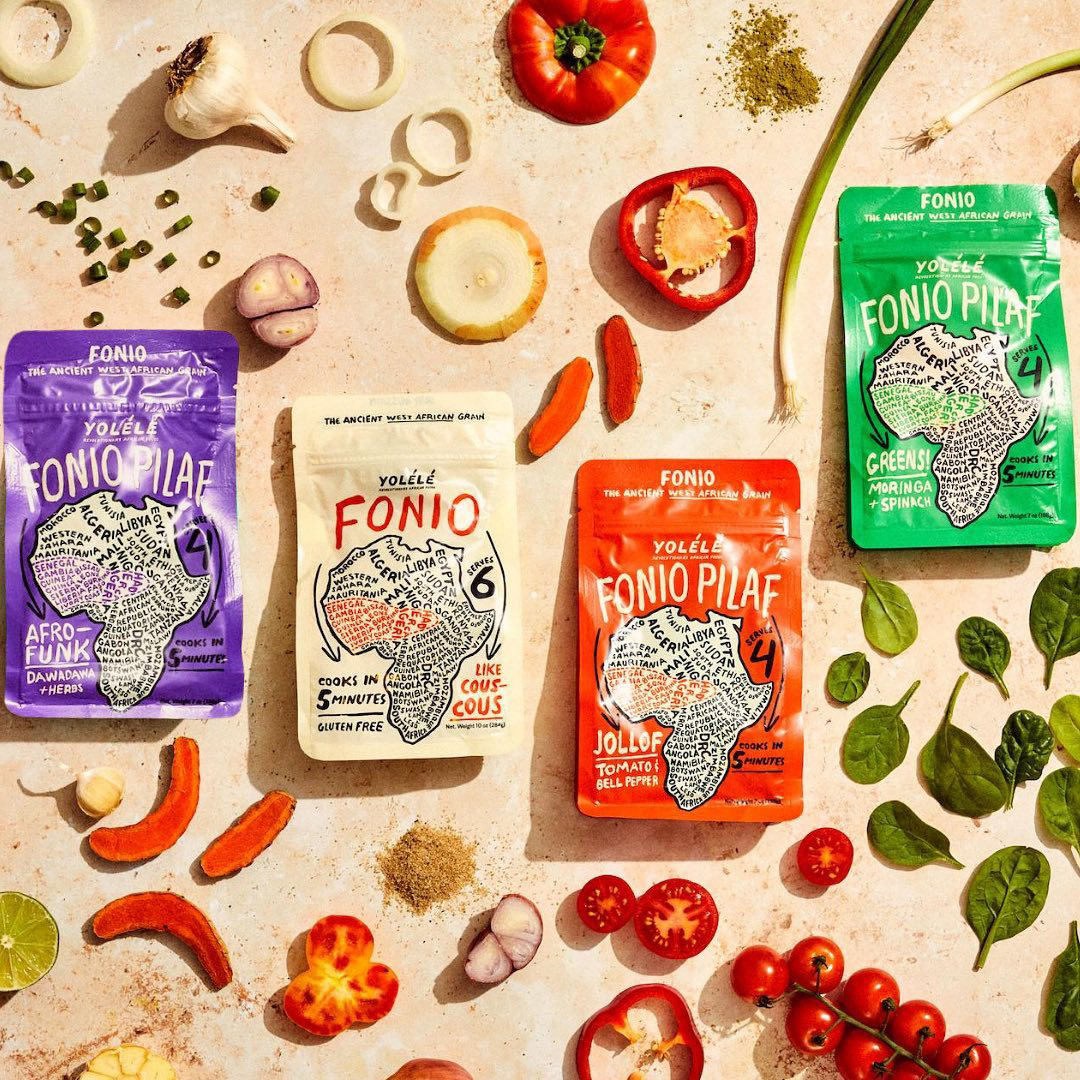 Using his grandfather’s recipes, Ethan Holmes launched this vegan applesauce company at the young age of fifteen. This all-natural applesauce is produced in small batches in Cleveland, Ohio using real fruit ingredients and no added sugar. In Original, Apple Pie Cinnamon, and Strawberry Peach, each scoop is bound to be sweet and refreshing. 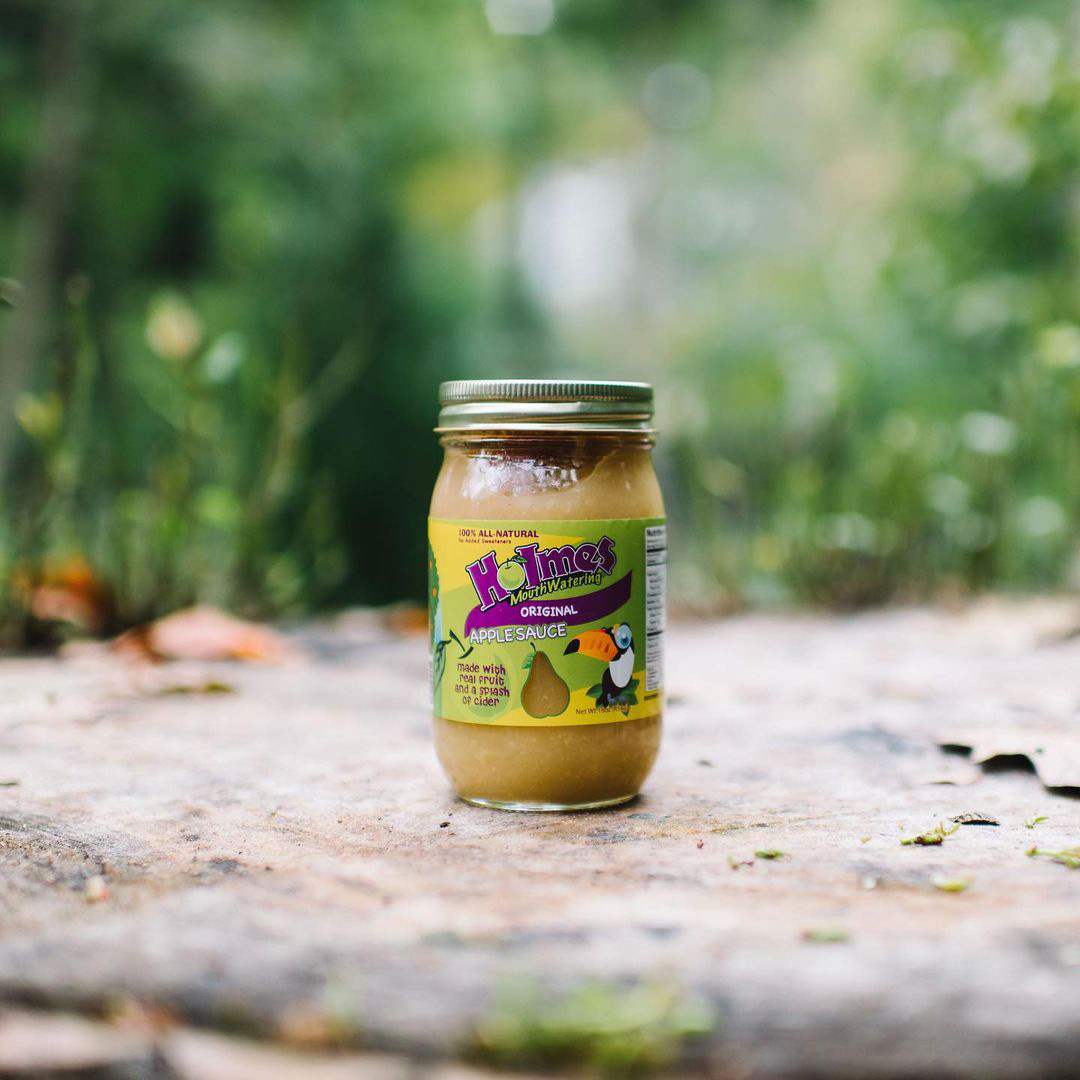 Searching for the perfect gift to give your favorite coffee lover and sports fan? BLK & Bold has teamed up with the NBA to release The Warm Up, a collection of coffee blends with co-branded packaging. Year-round, BLK & Bold donates 5% of their coffee and tea sales to the For Our Youth initiative—which will be matched by the NBA when you buy coffee from The Warm Up line. 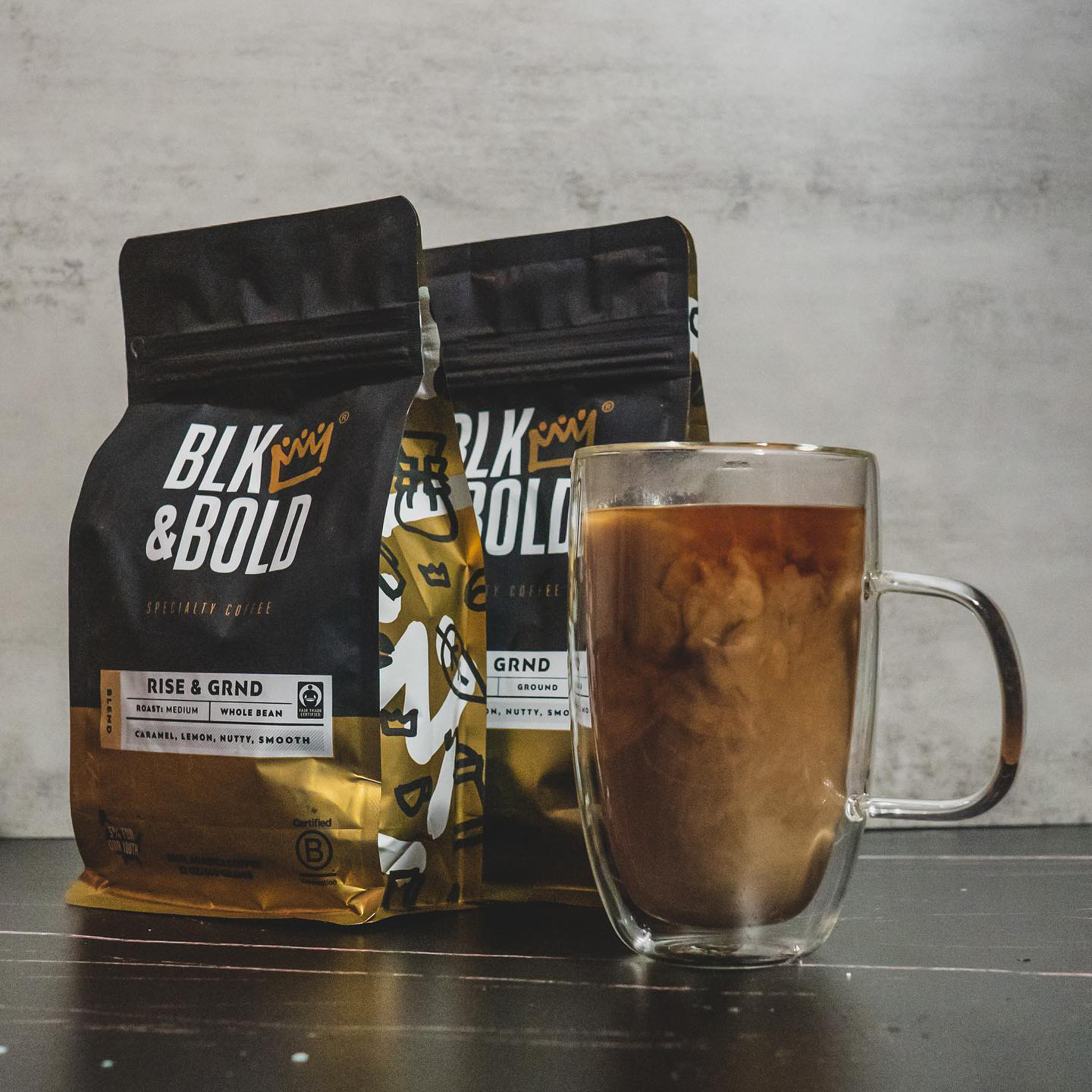 There’s nothing like breaking open a bag of chips—especially when they’re from Symphony Chips! Infused with the most drool-worthy mixture of spices, these vegan, gluten-free potato chips will make packing lunch exciting again. 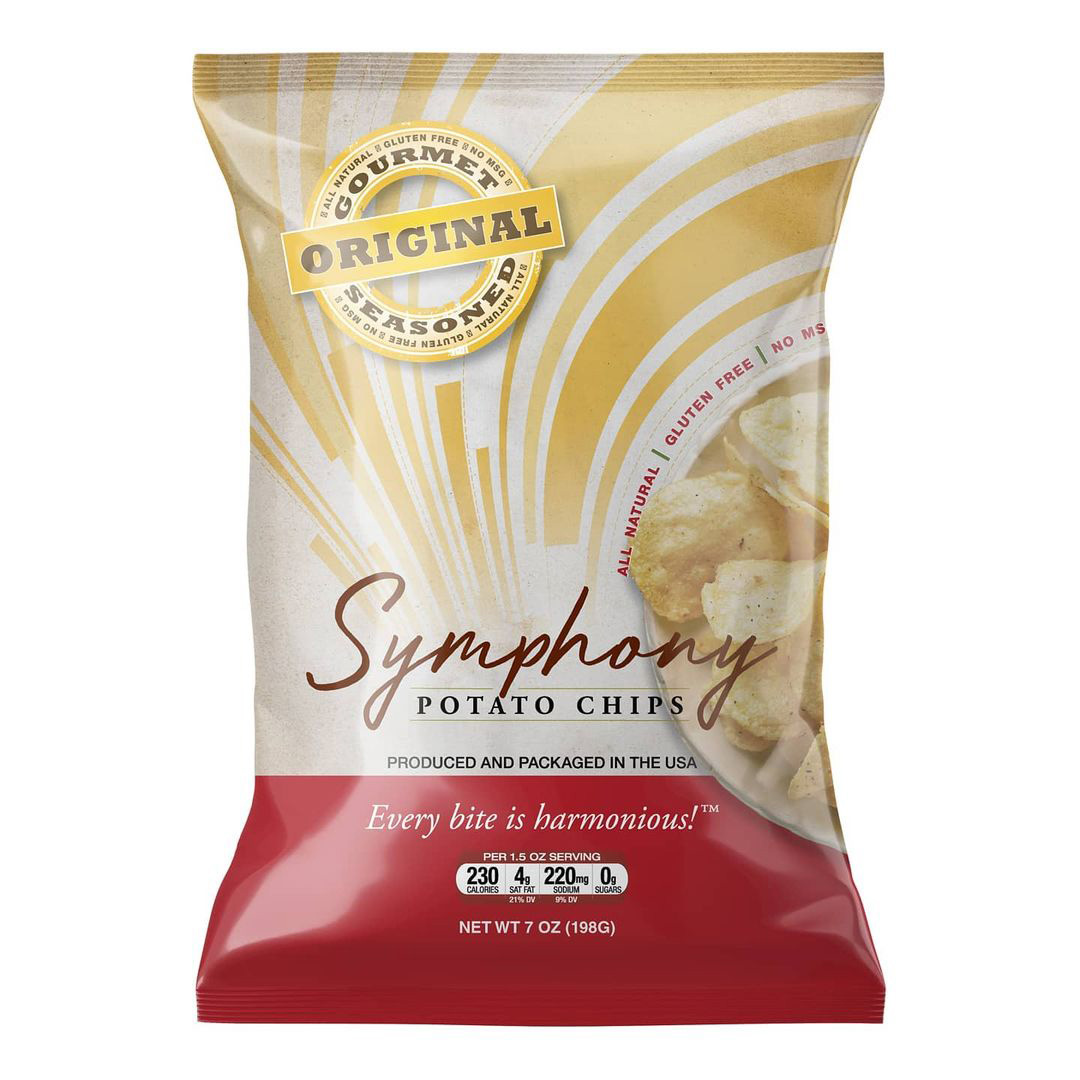 After wowing students and colleagues with her homemade granola balls, Margaret Barrow decided to turn it into a business. It’s NOLA, formerly known as Brooklyn Granola, specializes in health-forward chewy granola balls that are vegan, gluten-free, and non-GMO. The Decadent Chewy Chocolate bites make for a wonderful midday work snack. 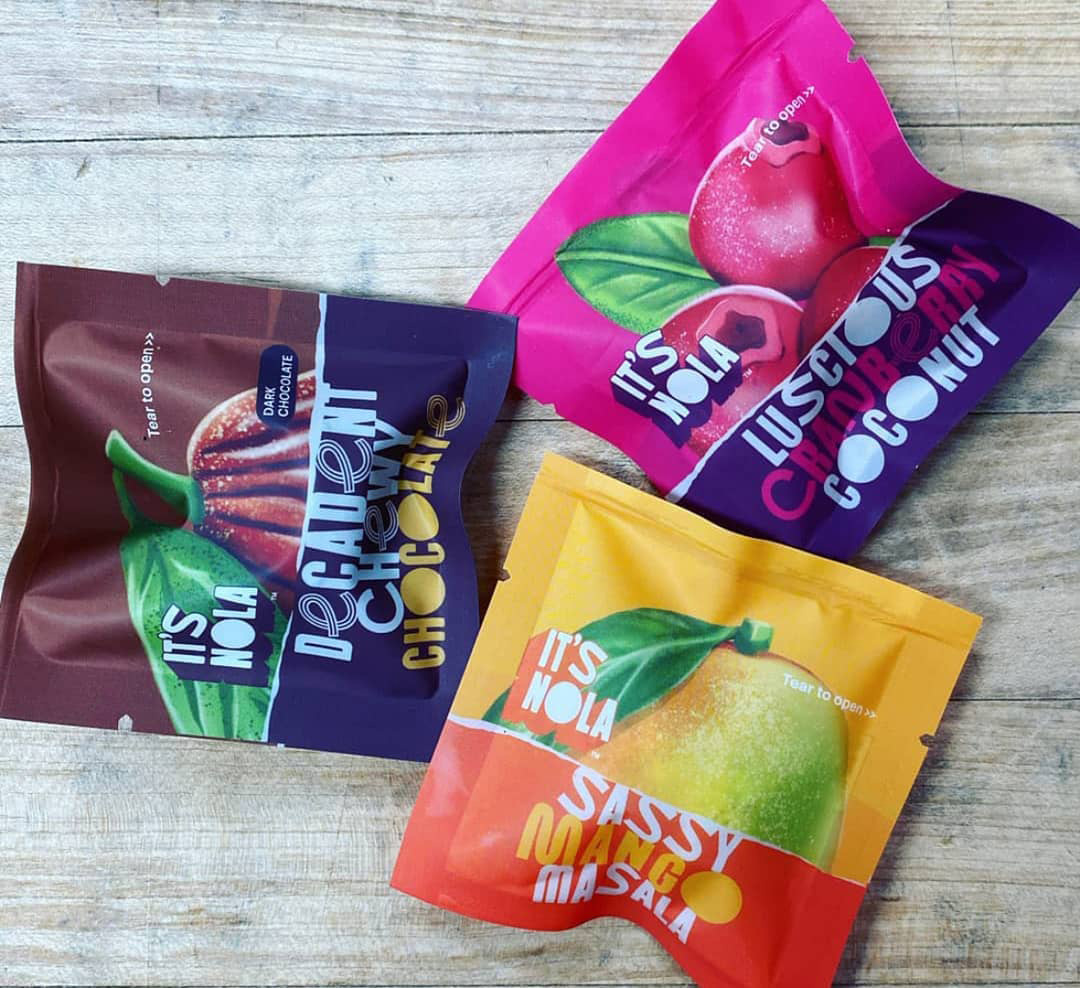 Assembling dinner is so much easier with A Dozen Cousins’ heat-and-eat beans! The flavor portfolio is inspired by traditional Black and Latino recipes from throughout the Americas. Perhaps you make a burrito bowl with Cuban Black Beans? Or serve the Trini Chickpea Curry over a bed of white rice? The options are endless! 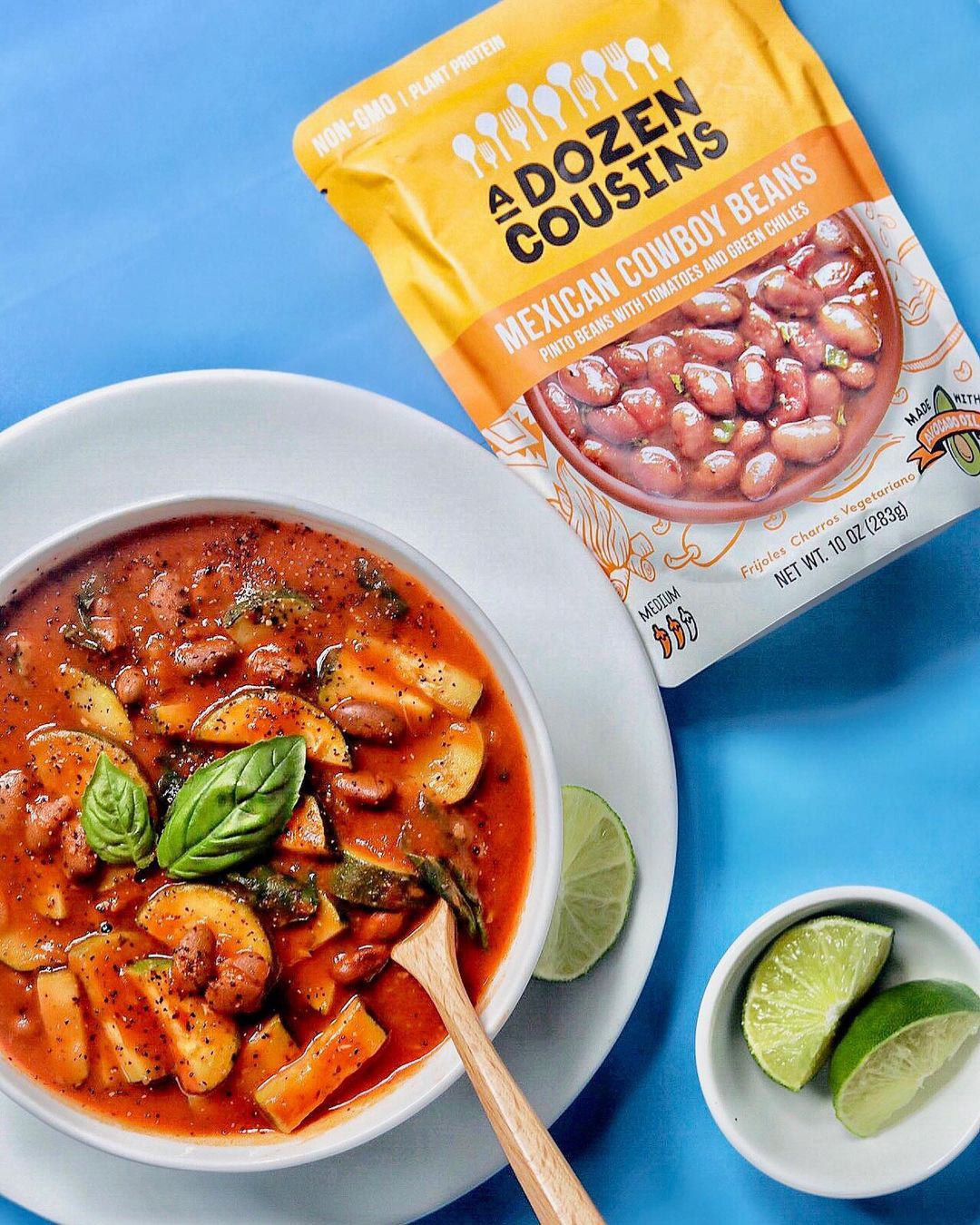 Photo courtesy of A Dozen Cousins

Want the taste of homemade vegan pancakes without all of the work? Let us introduce you to Vicky Cakes’ Pancake & Waffle Mix! Based on a decades-old buttermilk pancake recipe from the founder’s mom, these mixes will create light and fluffy pancakes that hit the spot every time. Each variety aside from Chocolate Chip can be made vegan when prepared with plant-based milk and egg alternatives. 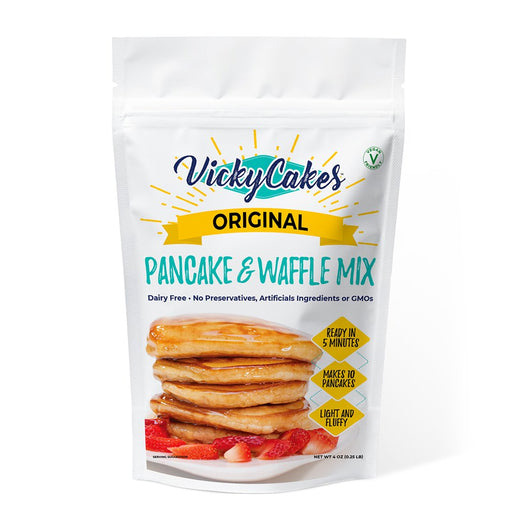 No matter what the weather is like outside, Egunsi Foods’ West African soups are always in season! The vegan flavor options include Obe Ata, Egunsi, Groundnut, Gbegiri, and Peppersoup. These five blends are made from fresh, local ingredients without any additives or preservatives. 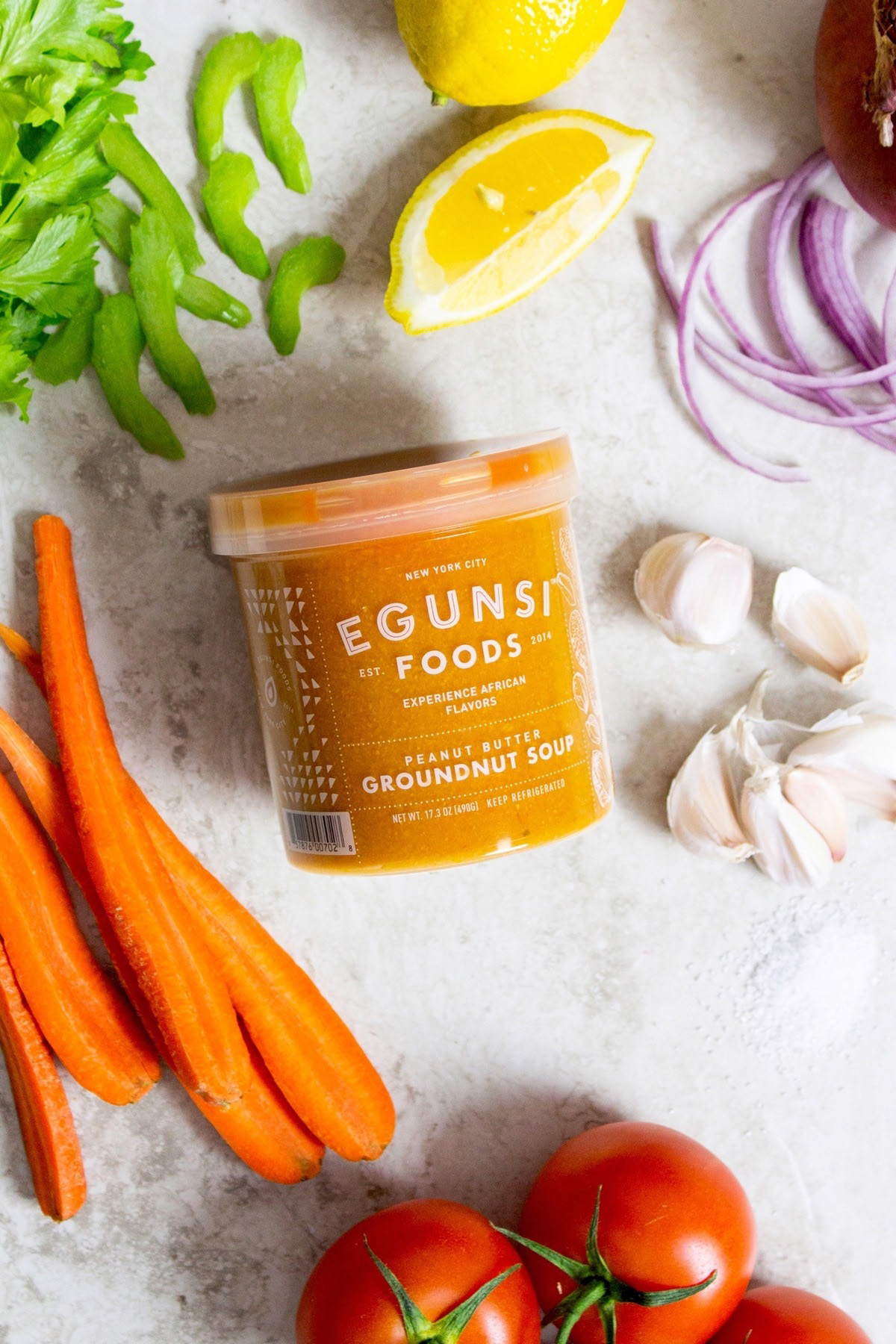