Whether you’re in the mood for an energy-boosting smoothie or a heaping plate of chick’n & waffles, NYC’s Black-owned vegan restaurants have you covered! 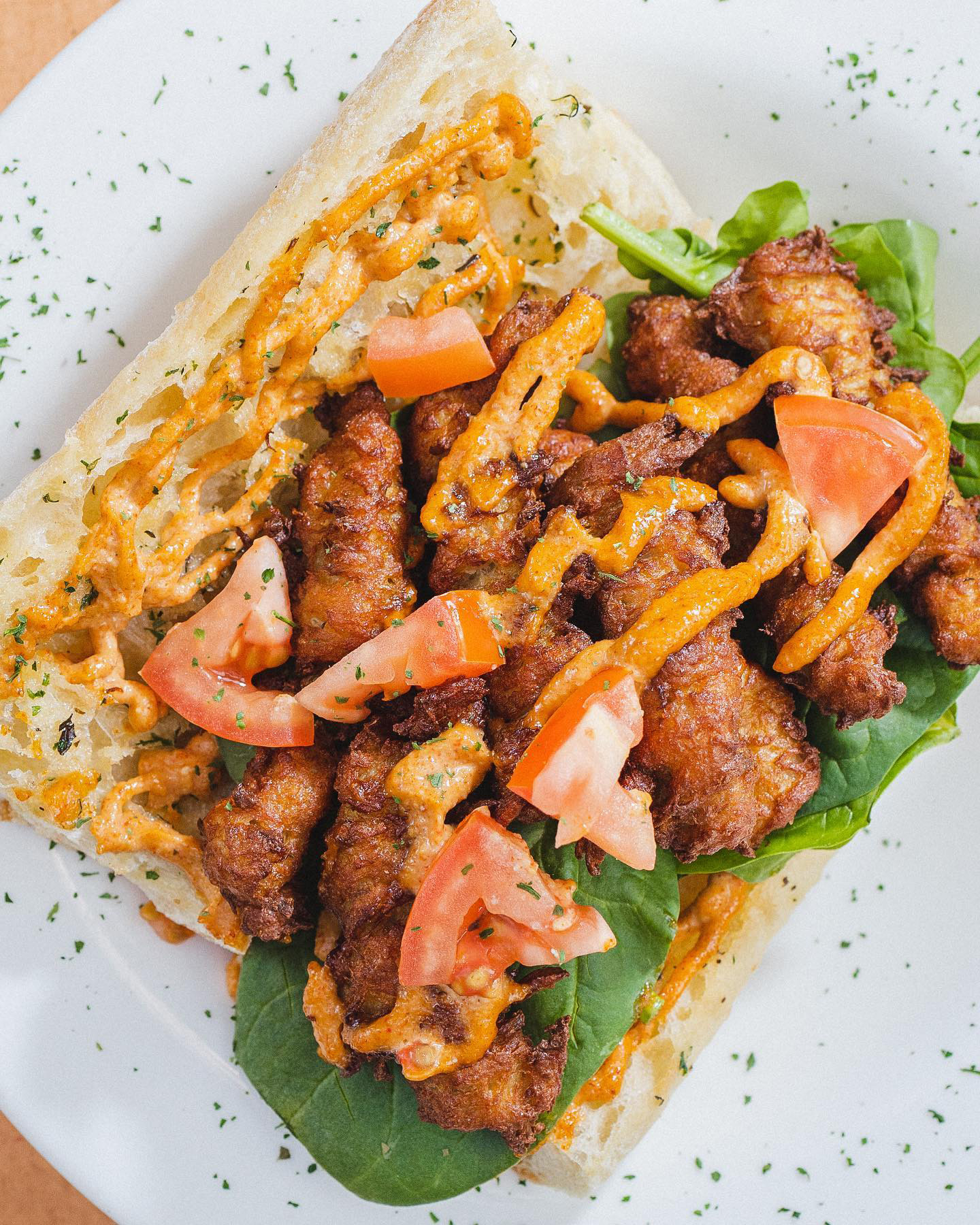 Founded by fashion adept and lifelong vegan Latisha Daring, Greedi Kitchen offers 100% plant-based cuisine that draws on Caribbean, African, and Southern flavors to create diverse and great-tasting dishes. The menu offers everything from coconut ginger fried plantains to crab cake sandwiches, all of which are made with fresh ingredients from local farmers markets and organic distributors. 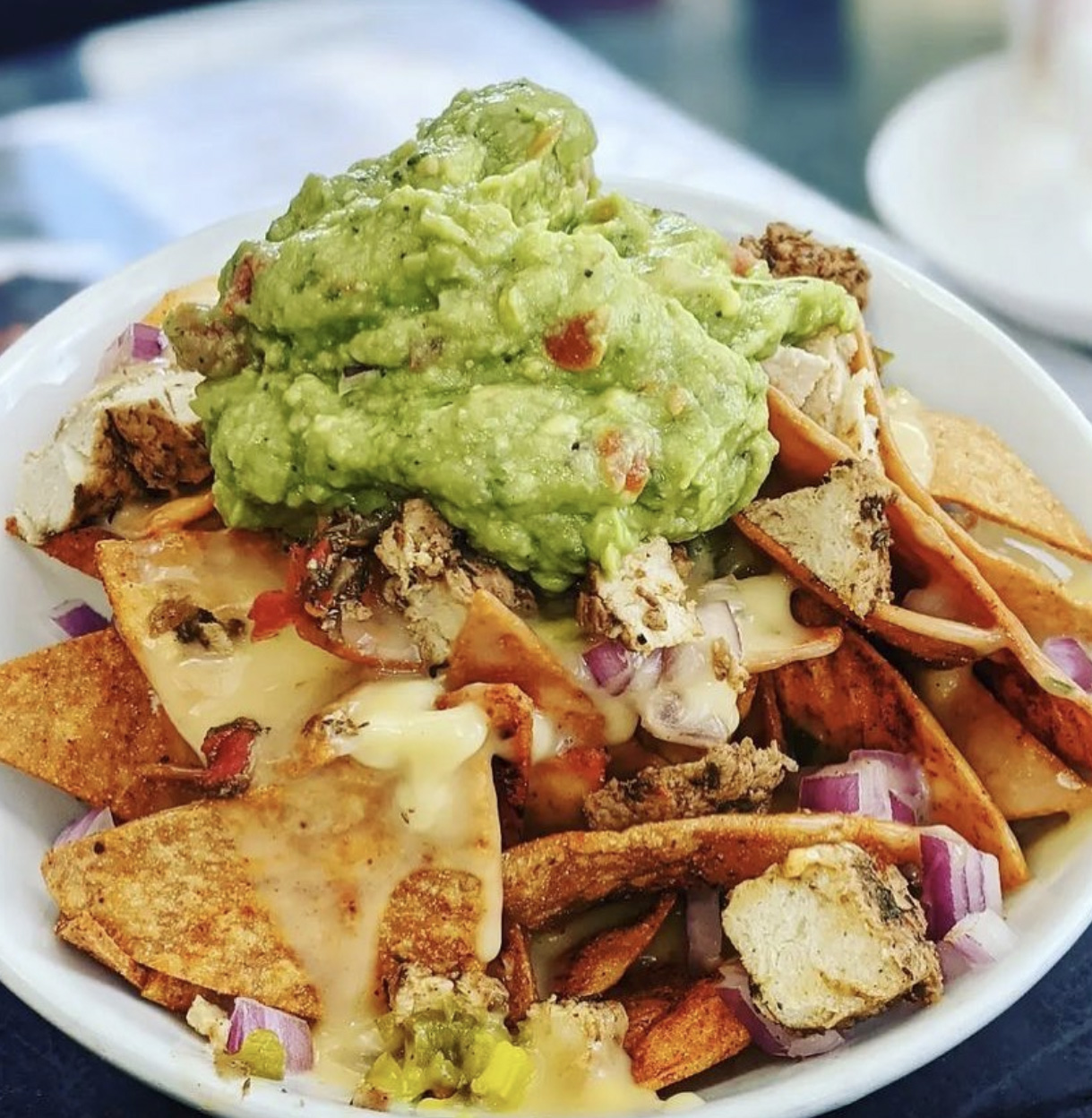 A vegan gem in the Rockaways, Veggie Castle has become a fan favorite with both locals and plant-based foodies alike. The owner, Viburt Bernard, serves vegan-friendly Caribbean fare as well as New York staple dishes like chopped cheese sandwiches (made with a cheese alternative, of course!). Bernard opened the eatery as a way to make fresh, vegan food accessible to lower-income communities. In addition to burgers and sandwiches, the restaurant also offers a variety of soy meats, such as ginger chicken, BBQ drumsticks, jerk chicken, and pepper steak. 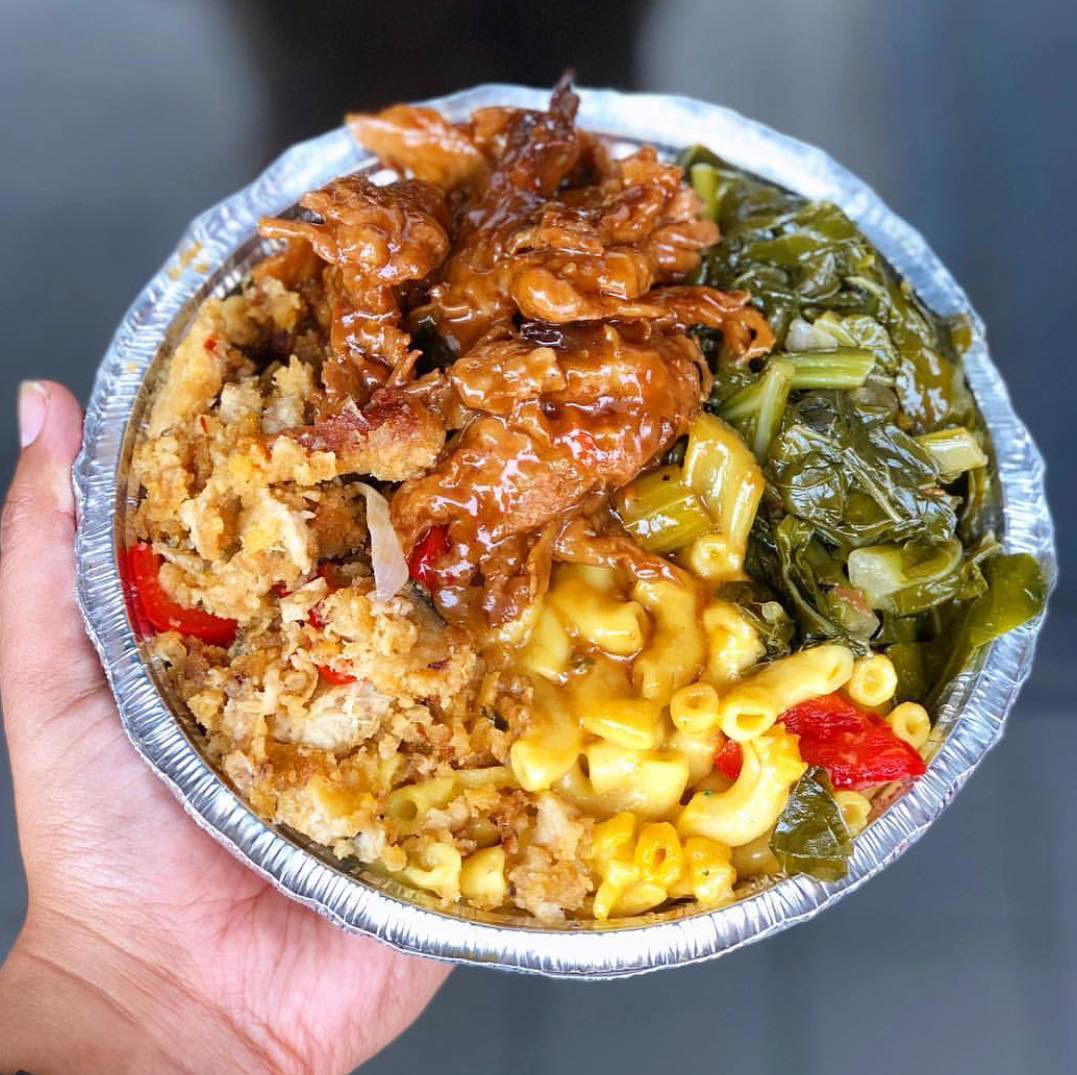 Looking for Southern comfort food in the Big Apple? Urban Vegan Kitchen is your answer! This 100% vegan spot was opened in 2016 by Pamela Elizabeth, who also founded the popular Blossom restaurant chain in NYC. The eatery serves comfort food classics like chick-un & waffles and Buffalo wings with vegan ranch, as well as unique bites like the Super Mario Quesadilla, which comes stuffed with fried oyster mushrooms, baked cremini and shiitake mushrooms, garlic, and Numu mozzarella on a flour tortilla. Don’t forget to also check out the beer, hard kombucha, wine, and cocktails! In addition to tasty vegan bites, merchandise such as t-shirts with cool vegan phrases is available and can be ordered on UrbanVeganKitchen.com. 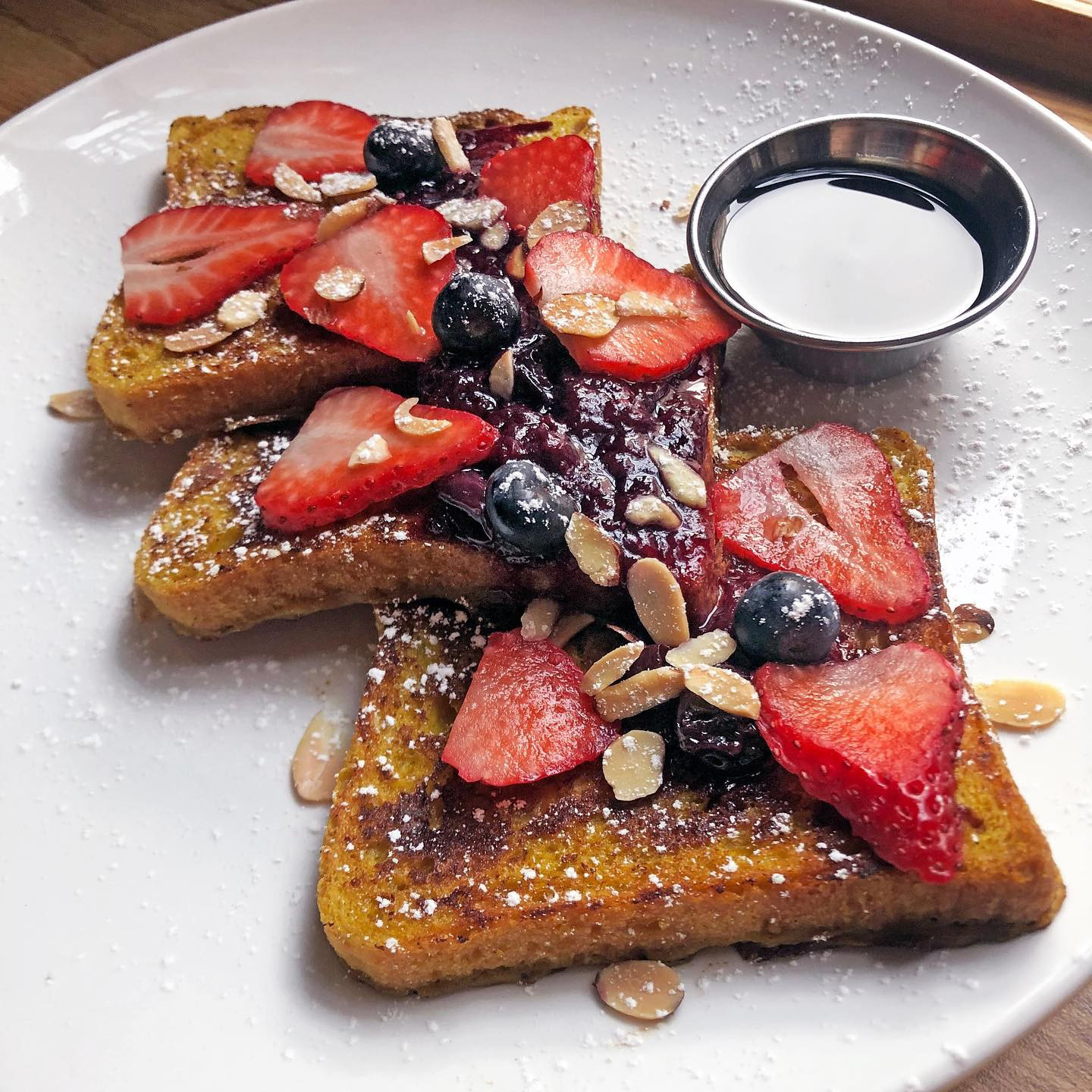 At the age of 22, Francesca Chaney opened Sol Sips, a community-centered vegan cafe that focuses on making plant-based eats accessible for all. The restaurant offers grab-and-go bites like cheesy garlic sticks, lentil patties, and the NYC classic bacon, egg, & cheese. Of course, you can’t forget about the sips, like the Buddha Blue Smoothie, which blends blueberries, mango, and lavender to create a sweet, earthy, flavor-packed drink. The eatery is also currently offering their signature plant’d chicken, which is available for nationwide shipping in a single package or a two-pack bundle. The two-pack bundle includes a limited-edition tarot recipe card designed by collagist Jessica Udeh and package designer Crystal Simone. 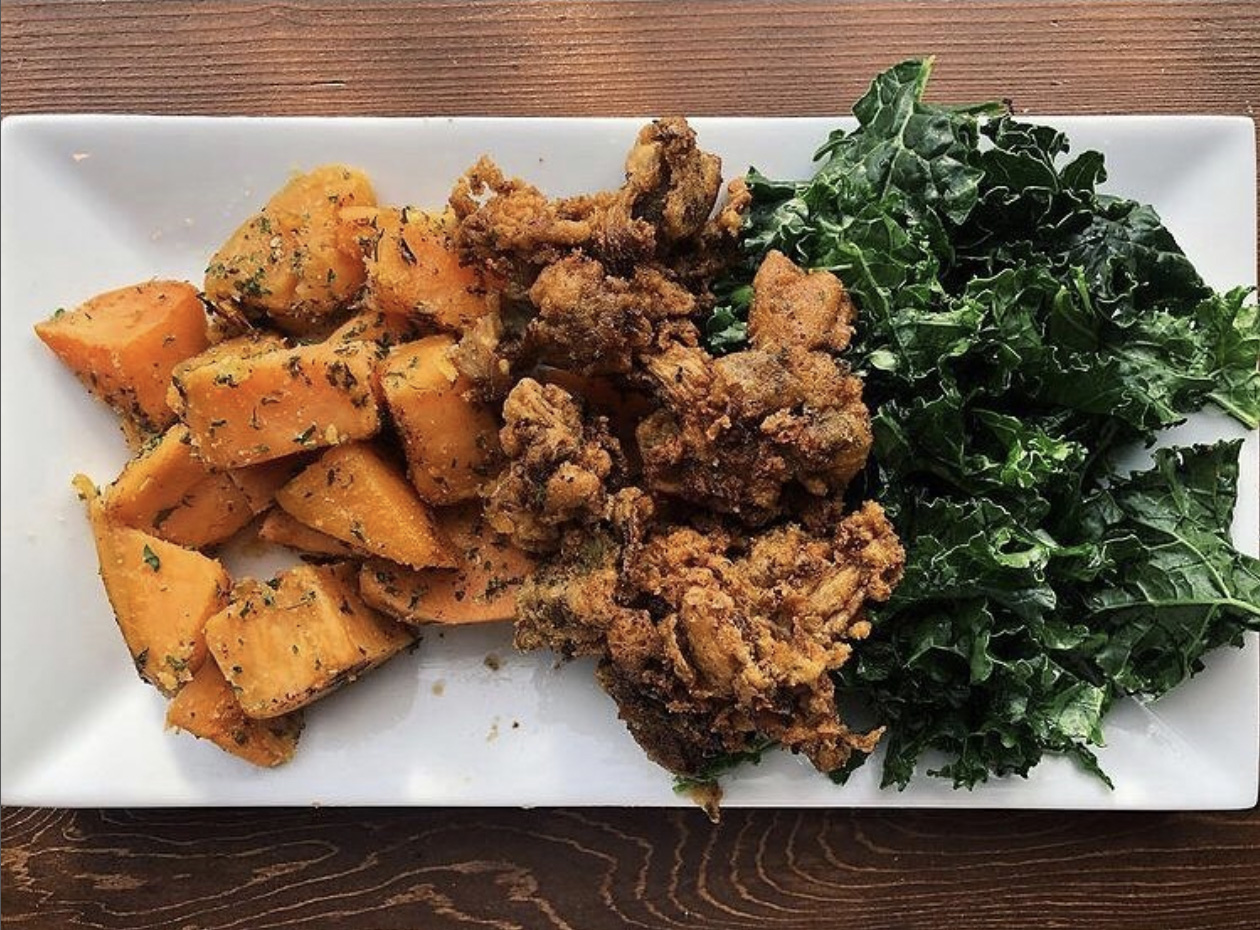 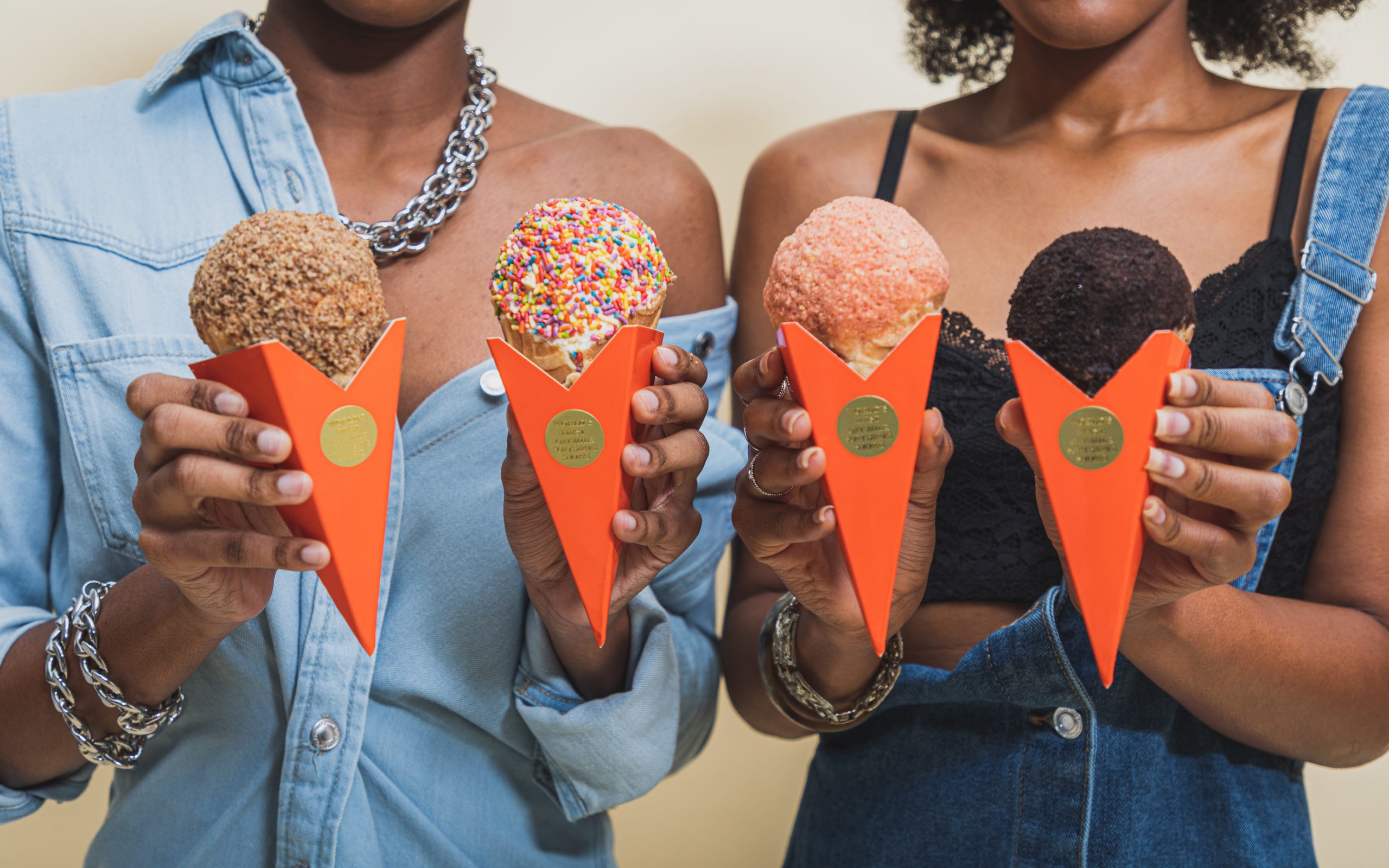 Need a cake for your loved one or a cobbler to bring to a cookout? How Delish has all of your vegan dessert needs covered! After ditching dairy and noticing the lack of dairy-free sweets, founder Laiquan Harvey-Davis opened the dessert shop as a way to provide a delicious alternative to dairy-packed treats. Cake options include tiramisu, pumpkin spice, banana puddin’ cheesecake, and sweet potato swirl cheesecake, to name a few. 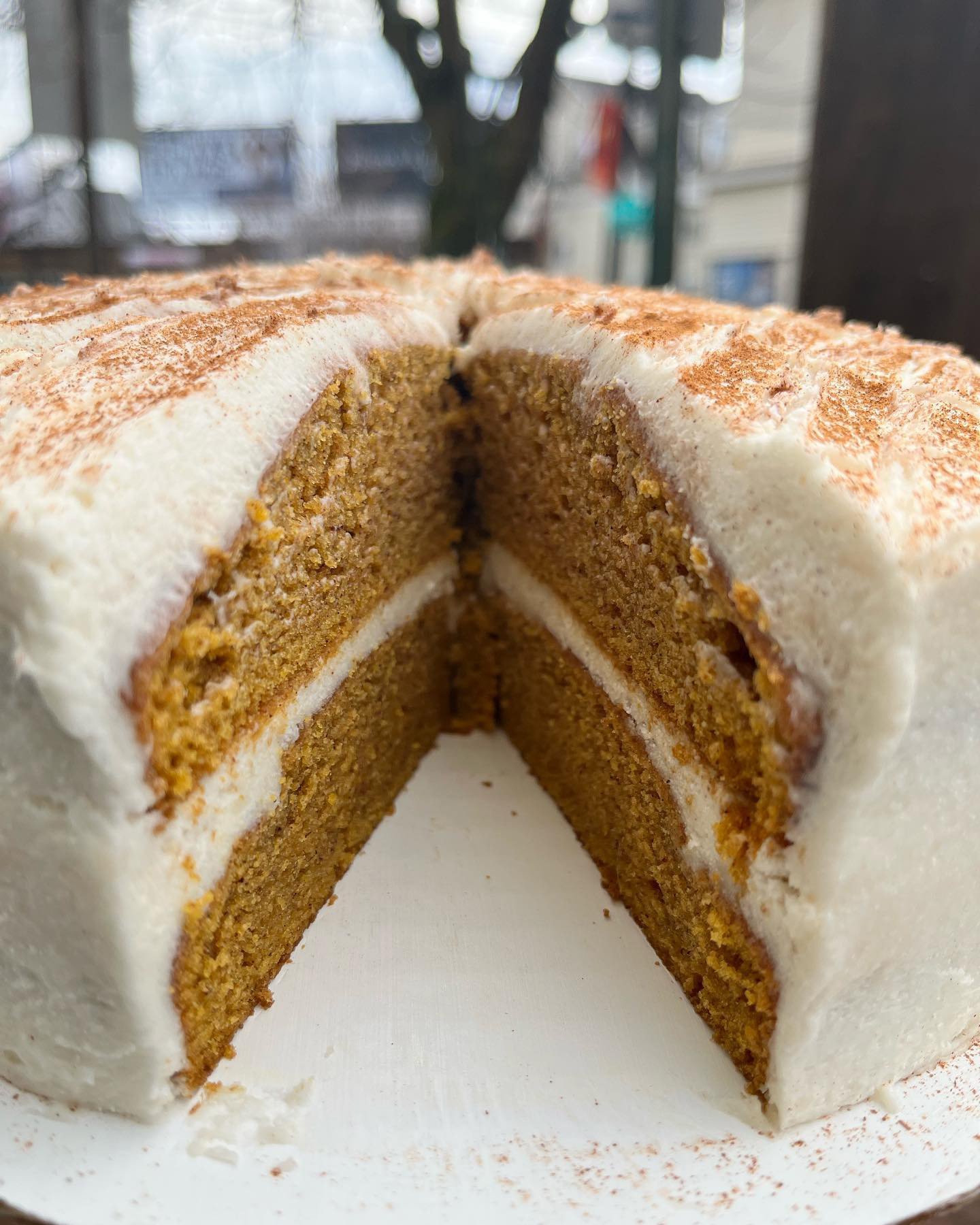 Inspired by their vision to create an Ethiopian culinary experience, Romeo and Milka Regalli founded Ras Plant-Based, which fuses modernity with age-old recipes to offer delicious one-of-a-kind cuisine. The menu features dishes like missir (a slow simmered red lentil stew served with fiery berbere sauce), as well as mushroom tibs (button mushrooms, tomato, jalapeno, onion, and rosemary), and sambusa (flaky pastry shell stuffed with a choice of savory mixed vegetable or lentil filling). Wash it all down with Ras Toddy or a glass of Spellbound Pinot Noir. 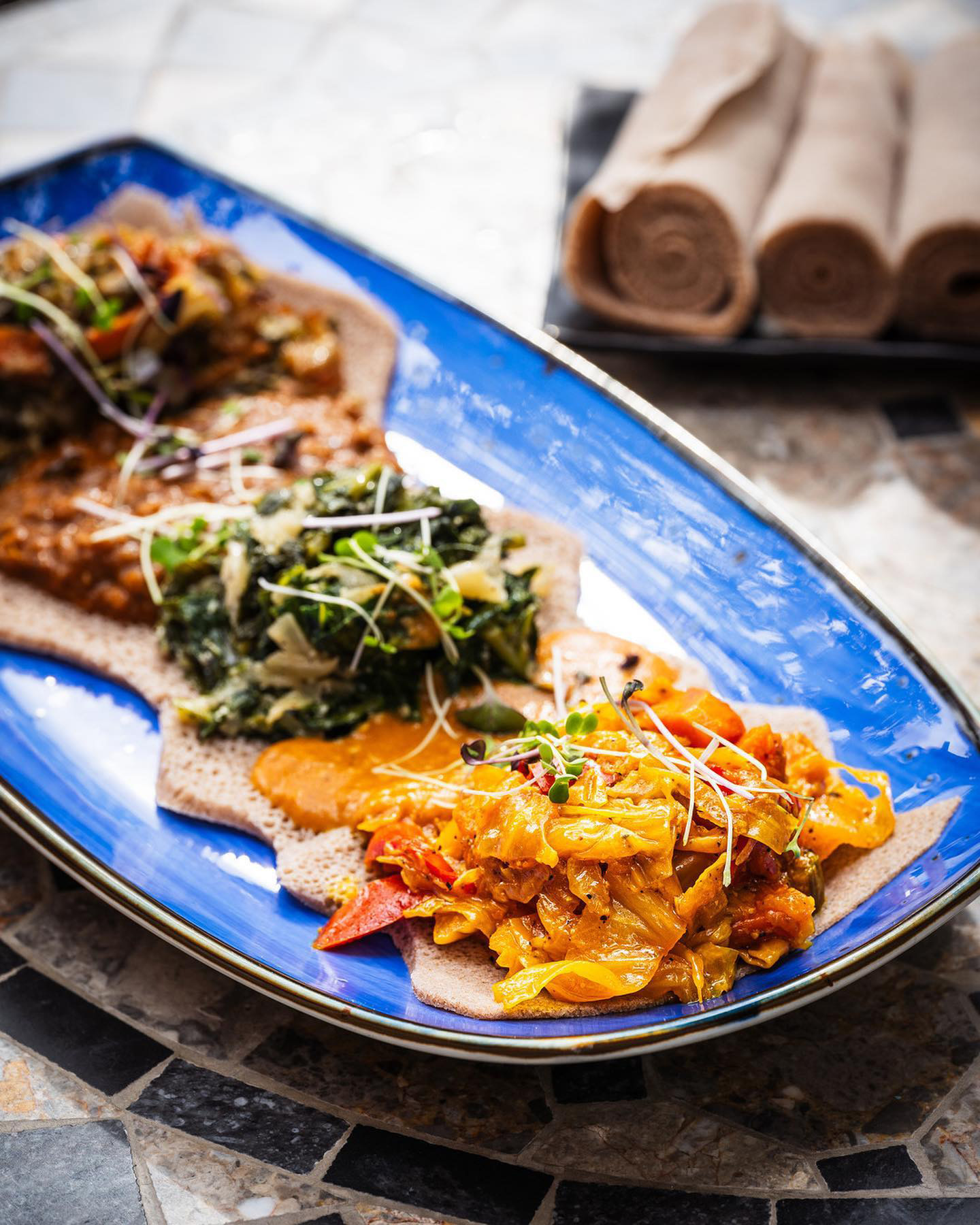 Online (Based in the Bronx)

This vegan bakeshop is putting to rest any misconceptions about plant-based desserts through their delicious treats. The owner, Drea Smith, has always found joy and excitement from baking for friends and family, and thus, The Uptown Vegan was born. Browse the Flavor Menu and you’ll find all kinds of delectable sweets, such as Drea’s Famous Sweet Potato (spice cake made with sweet potato puree and vegan cream cheese frosting) and Chris’ Berry Blast (strawberry cake with vanilla frosting and strawberry preserves). All flavors are available as a layer cake or cupcakes. Uptown Vegan treats can also be found at Brooklyn Tea, Greedi Kitchen, and Next Stop Vegan restaurants. 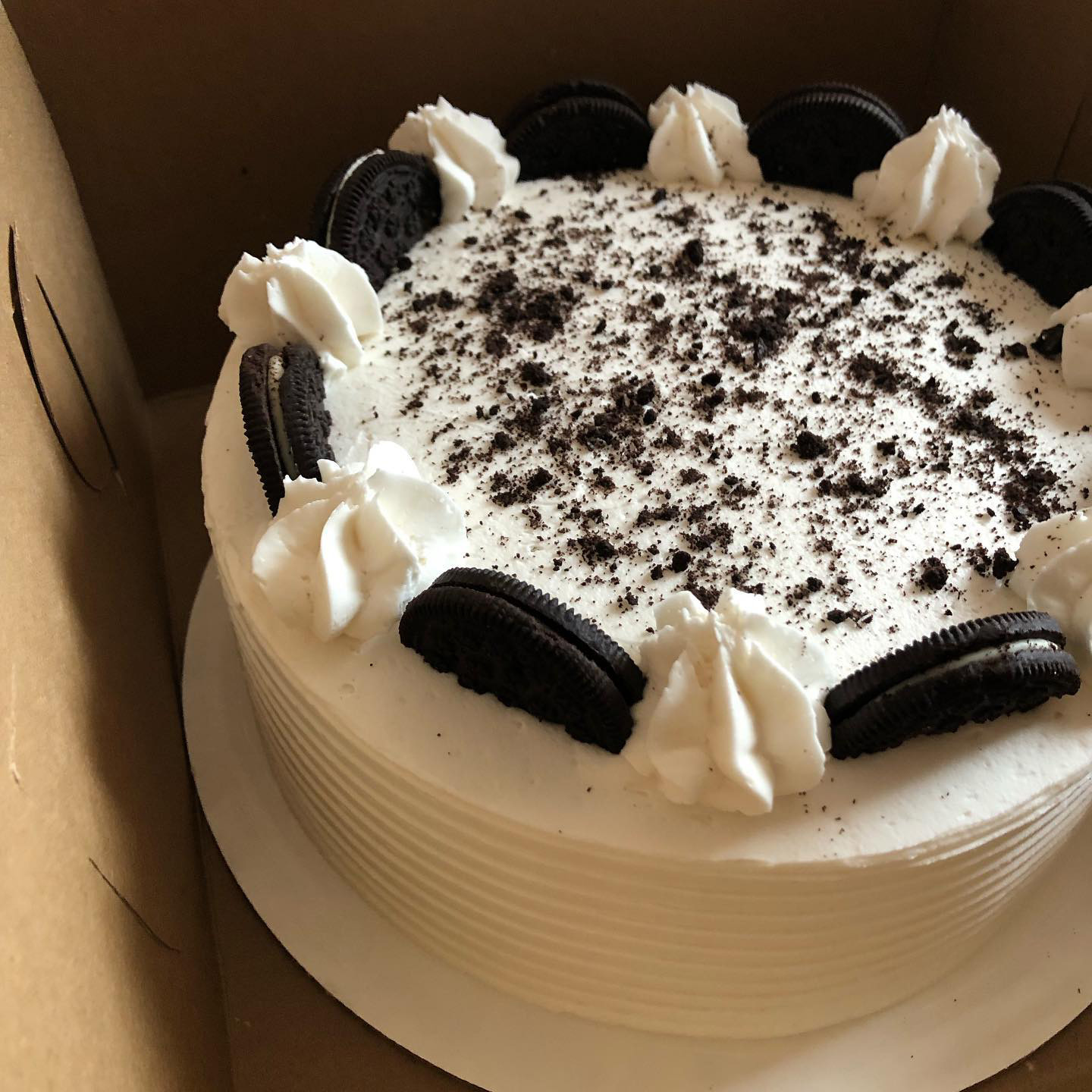 TRI Lounge has been serving up exclusively vegan eats since November 2019. The cafe presents a twist to the usual vegan eatery, as they not only serve tasty plant-based food but also offer performance opportunities for local talents as well as community gatherings such as adult game night. The owner, Javonte Thompson, opened the restaurant as a way to provide a space for performers to gain exposure while also introducing vegan food to the community. The menu features everything from Buffalo chick’n sandwiches to classic New York-style pizzas. Smoothies and desserts are also available, including the fan favorite whipped banana (frozen banana whipped into a sorbet). 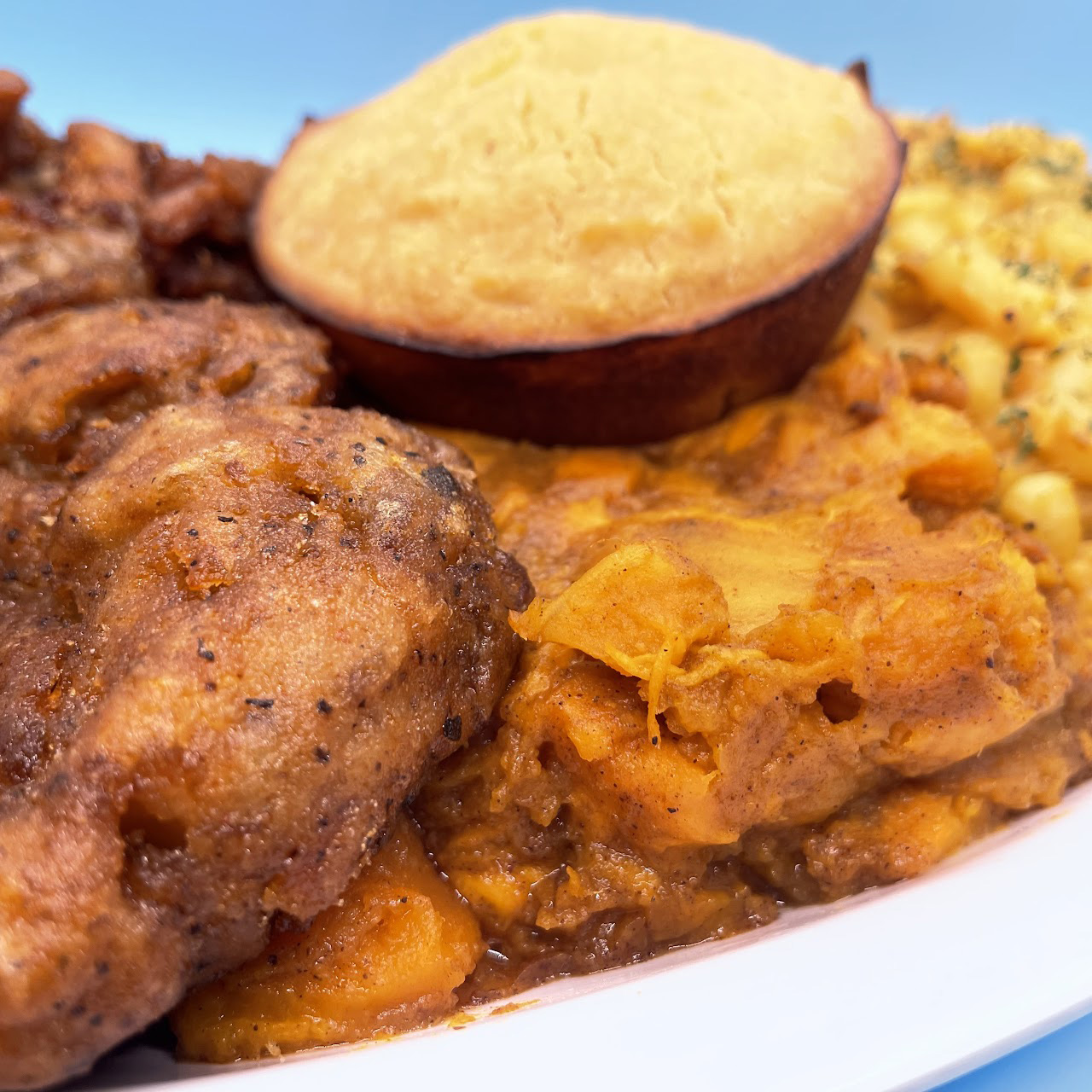 Owned by esteemed rappers Styles P and Jadakiss, Juices for Life provides fresh, healthy drinks to the communities of the Bronx and Yonkers. In 2017, DJ and radio personality Angela Yee opened a fourth location in Brooklyn’s Bed-Stuy neighborhood as a way to provide the community with nutritious food options. Skip the coffee and order a Morning Rush Shake, which blends banana, peanut butter, and almond milk for an energizing breakfast, or get a double dose of wellness with a Green Supreme Smoothie and a wheatgrass shot. 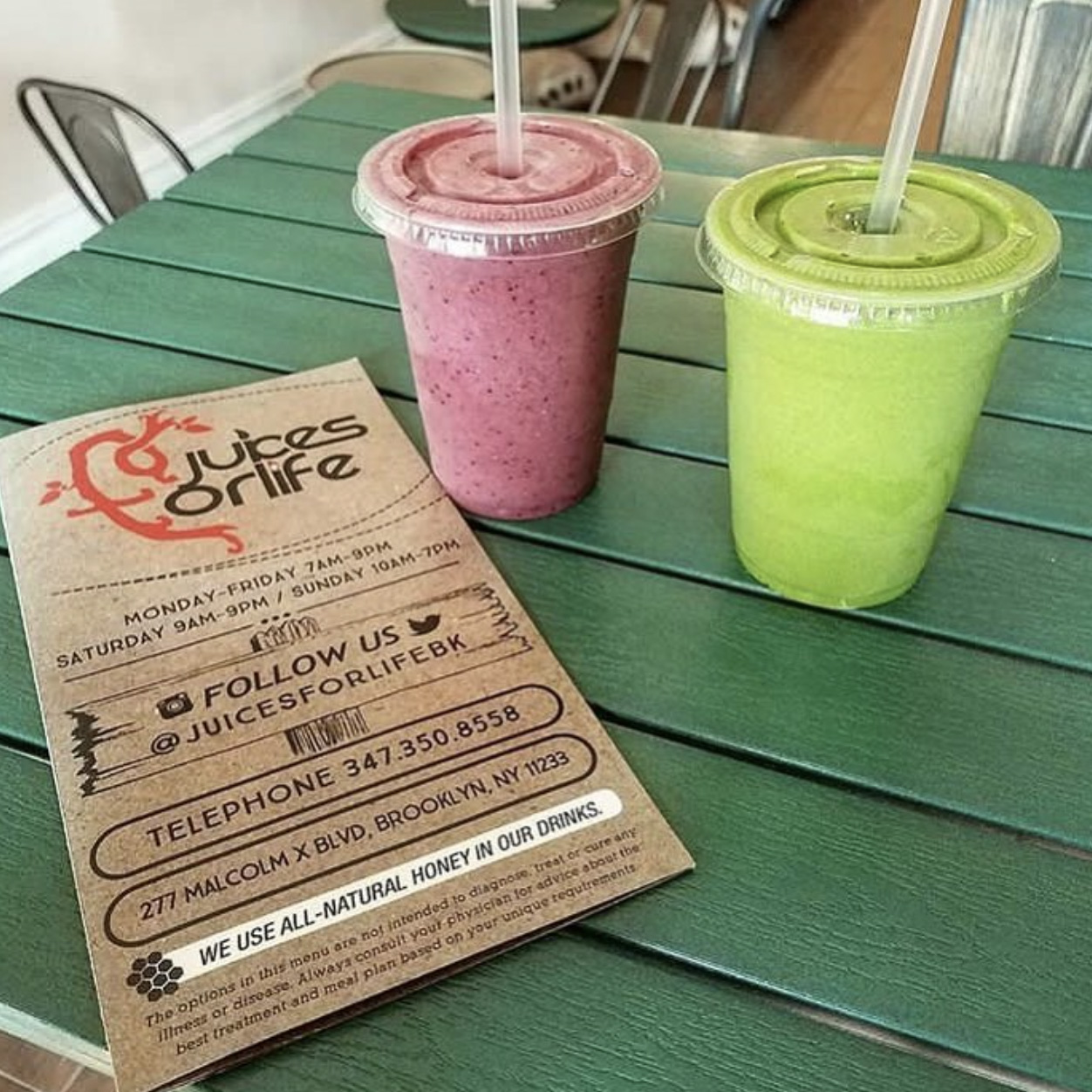 Nestled in the heart of Newark, New Jersey, Blueberry Cafe offers organic cold-pressed juices and smoothies as well as vegan pasta and soup. The founder, Rashena Burroughs, opened the cafe as a way to bring healthier food options to the community. Start your day with a Strawberry Crush Smoothie (banana, hemp seeds, strawberries, goji berries, and coconut water), or build your own smoothie with the many fresh fruit options, and add the mushroom nuggets served with BBQ sauce to your order for good measure. 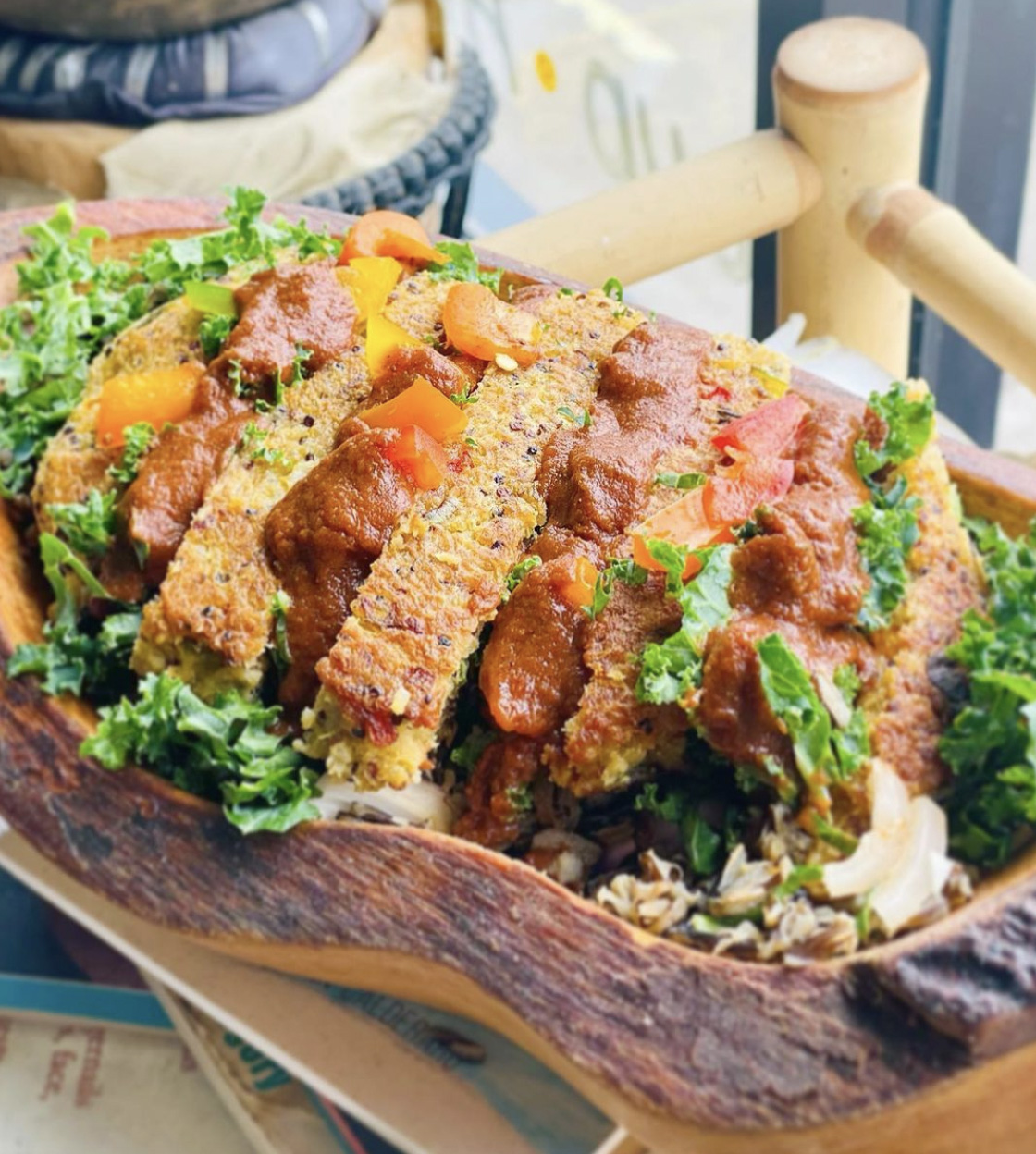 We’re ah … ha … ha … ha … stayin’ alive at this vegan eatery! Owners Craig Thompson and Steffen Alexander opened the restaurant in January 2019 as a way to offer good, vegan eats to the Laurelton neighborhood, where the two grew up. The menu offers everything from Rasta Pasta to smoky BBQ sandwiches, so there is an option for every palate. You’ll also find a variety of empanadas, such as curry jackfruit empanadas, kale and chickpea empanadas, Philly empanadas (think vegan Philly cheesesteak wrapped in house-made dough), and pizza empanadas. Don’t forget to peek at the desserts—apple spice cheesecake, anyone? 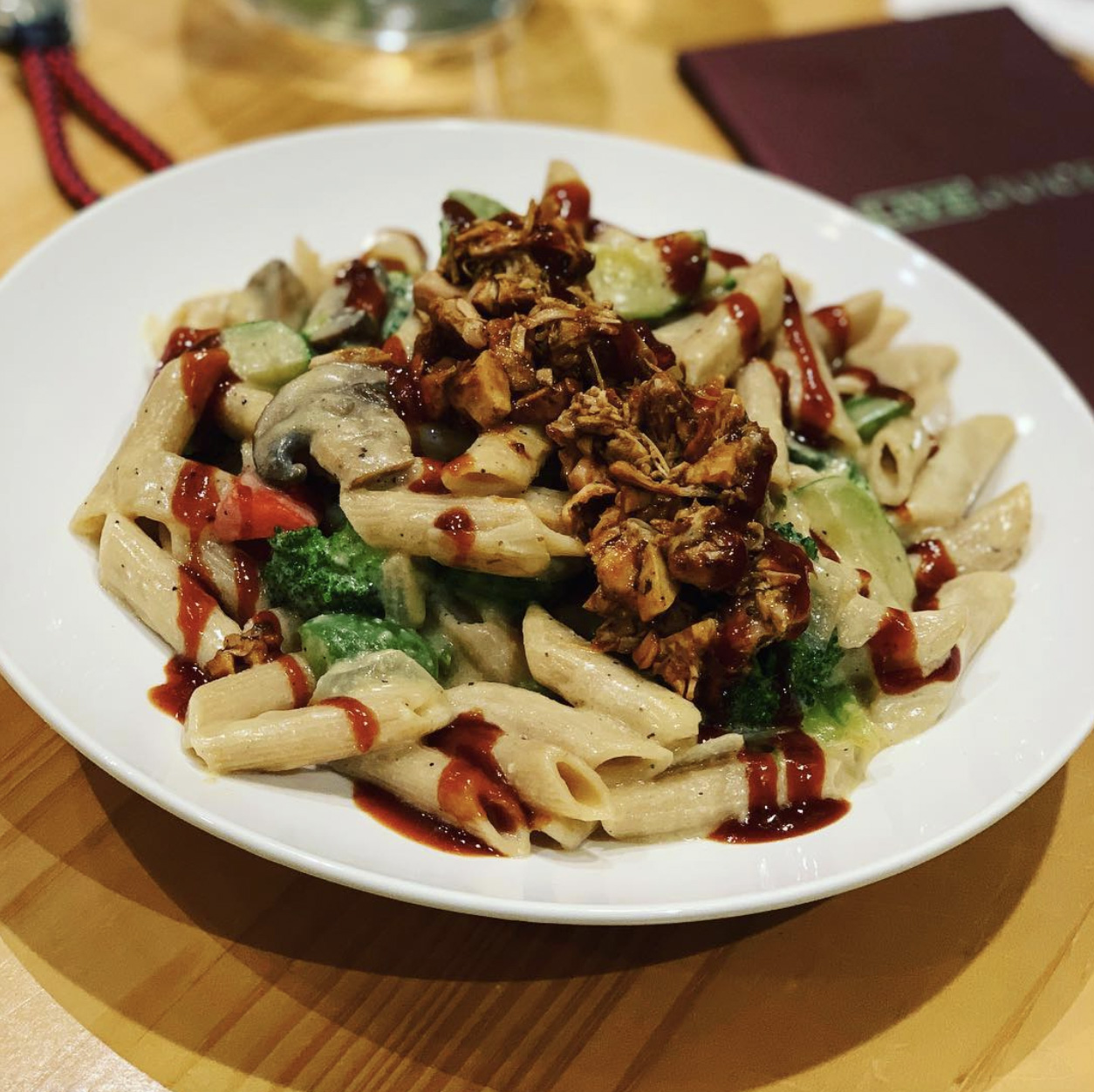 Get a taste of the Caribbean at Caribreeze Vegan Delight. The 100% plant-based eatery offers Jamaican dishes like vegan oxtail (seitan based), vegan Jamaican beef patties, and more. Impress your carnivorous friends with the peppered vegan steak, which comes served with your choice of rice and mixed vegetables. Add a slice of zucchini cake and sweet potato pudding to complete your order. 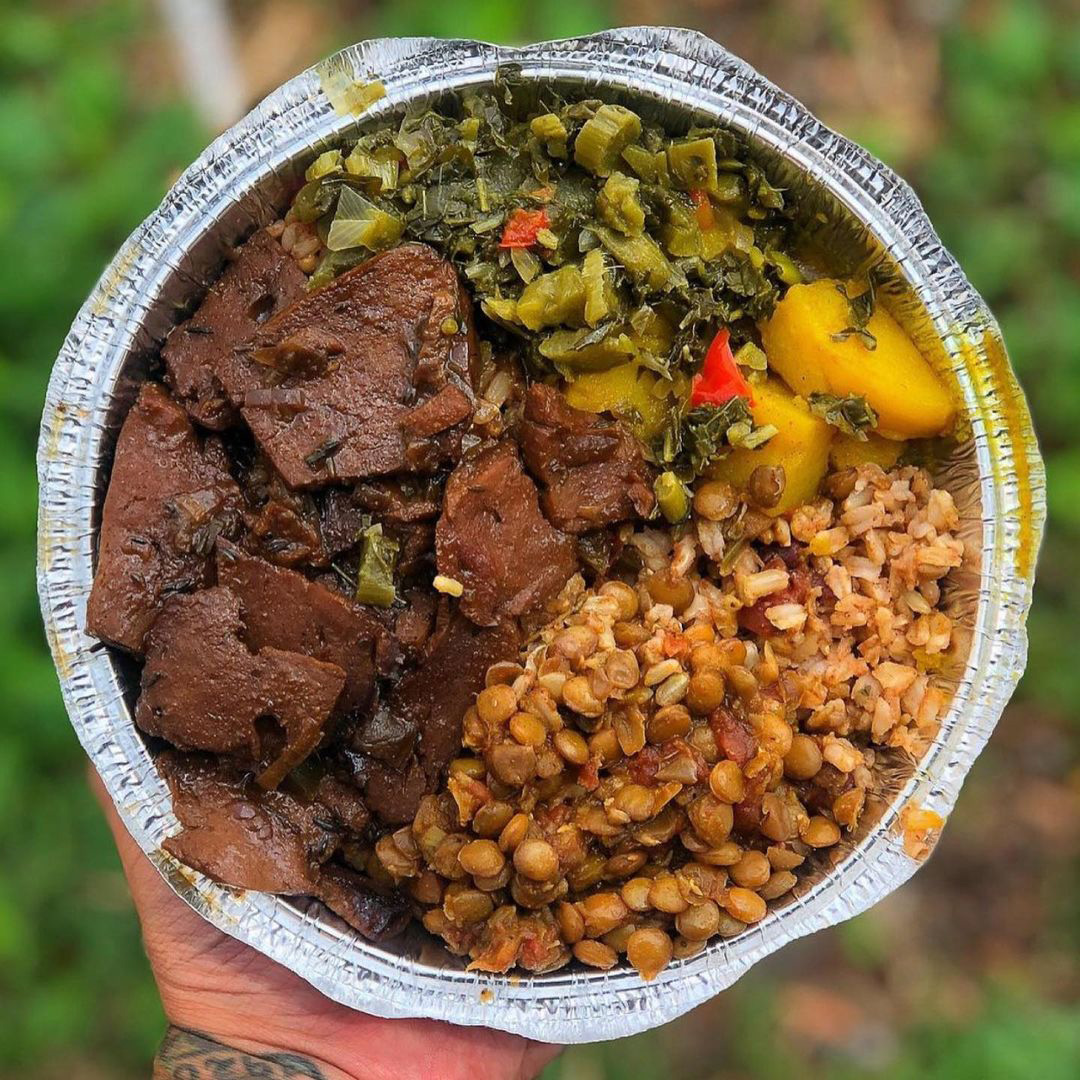 Named after their son Maddox’s commentary after tasting his first allergy-free treat—mo’ pweeze (more, please)—the Allens opened Mo’Pweeze Bakery as a way to provide delicious, vegan desserts to those who suffer from food allergies. Every item served at the bakery is free from all common allergens, so there is something for everyone on the menu. Enjoy a salted caramel cupcake, or pick up one of the bakery’s award-winning dutch apple pies. 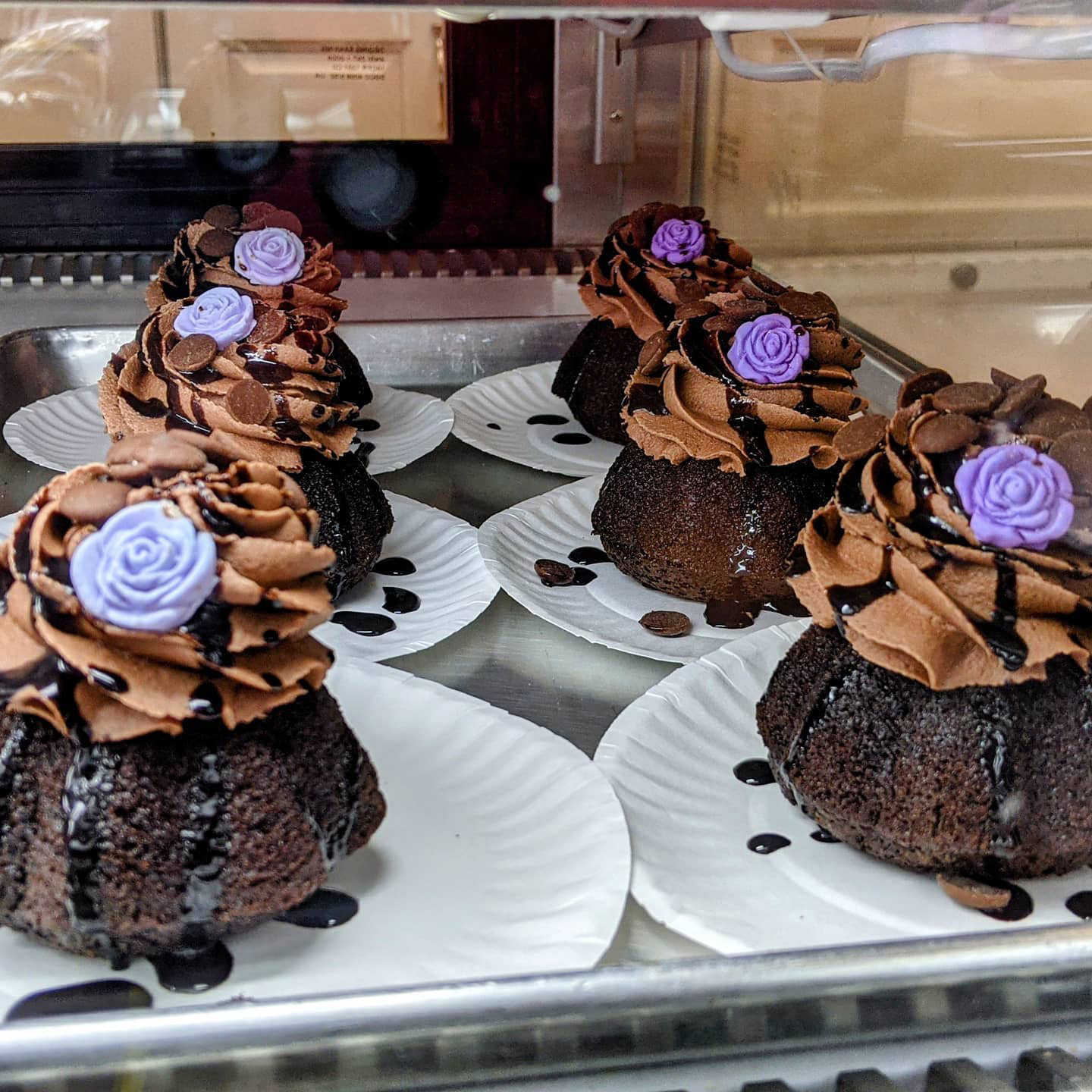 Turn that frown upside down with delicious vegan cuisine from Ital Kitchen. The owner, Chef Michael Gordon, adopted a plant-based diet after joining the Rastafari religion and movement in his native Jamaica. Now, he’s sharing “Ital,” a form of cooking that uses no meat or additives, with the Crown Heights neighborhood of Brooklyn. Gordon also incorporates French cooking techniques into his dishes, which he learned from his culinary training at Le Cordon Bleu. Start your meal with the Kanoa Salad (kale, quinoa, grapes, raisins, tomatoes, and roasted carrot vinaigrette), and order the Ital Veggie Jerk Chicken (veggie seitan and chunks of zucchini marinated in jerk sauce) as your main. 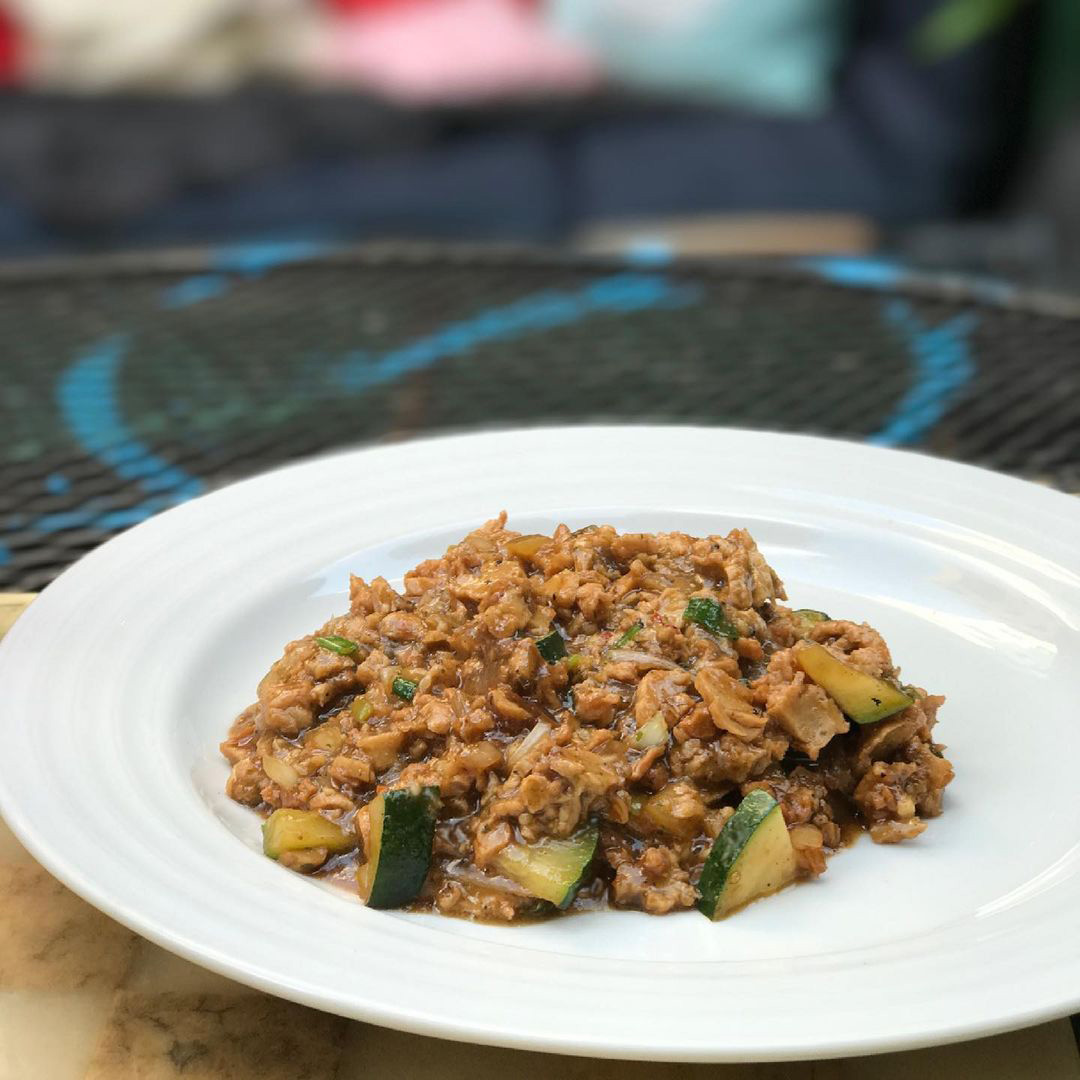 Owned by husband-and-wife team Michael and Nicole Nicholas, this all-vegan cafe doubles as a lifestyle shop and features American-style bites as well as flavors of the Caribbean, such as Tivoli Tacos (seasoned Beyond ground meat, house-made pico de gallo, arugula, cilantro, and spicy mayo on an oversized flour tortilla) and Mofongo (mashed green plantains on a bed of mixed greens topped with salsa). Accompany your meal with an iced latte or a glass of Laurent Sauvignon Blanc. 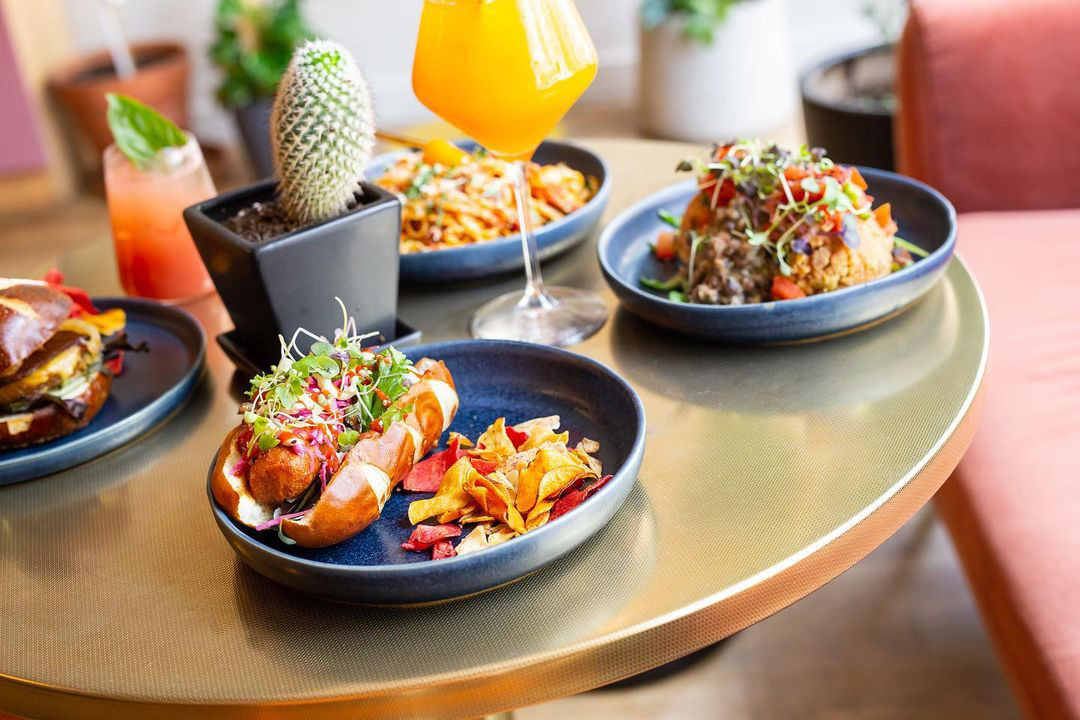 If you’re like us, you probably love vegan cookies, especially those from Sofia & Grace Cookie Company! Shalonda Vasquez, educator and certified cookie expert, named the company after her four-year-old twins, Sofia and Grace. Choose from a variety of flavors such as red velvet, triple chocolate, peanut butter, and matcha chocolate caramel chip, to name a few. In addition to sweets, the menu also features savory items such as vegan pasta salad and vegan empanadas stuffed with kale and curry chickpeas. 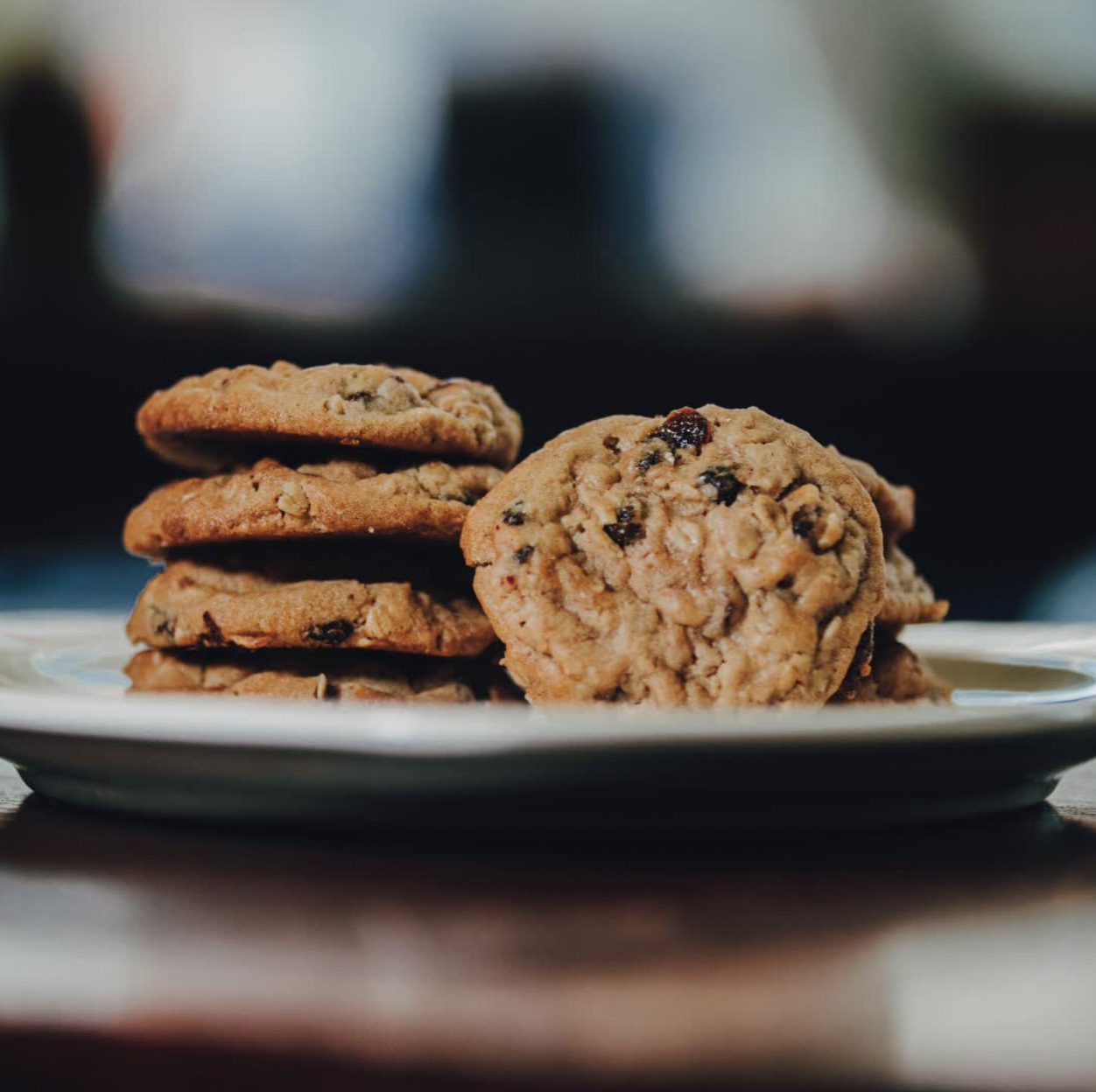 Grace Kelli Cupcakes is bringing Southern charm and delicious baked goods to NYC. Owned by North Carolina native Sandra Mathis and her daughter Grace Kelli, this duo bakes vegan cupcakes that come in vanilla, strawberry, and chocolate flavors. The bakery also offers cookies in flavors like chocolate chip, oatmeal raisin, red velvet, and more. Note that both the cupcakes and cookies must be requested vegan when ordering, and vegan items have a $5 upcharge per dozen. 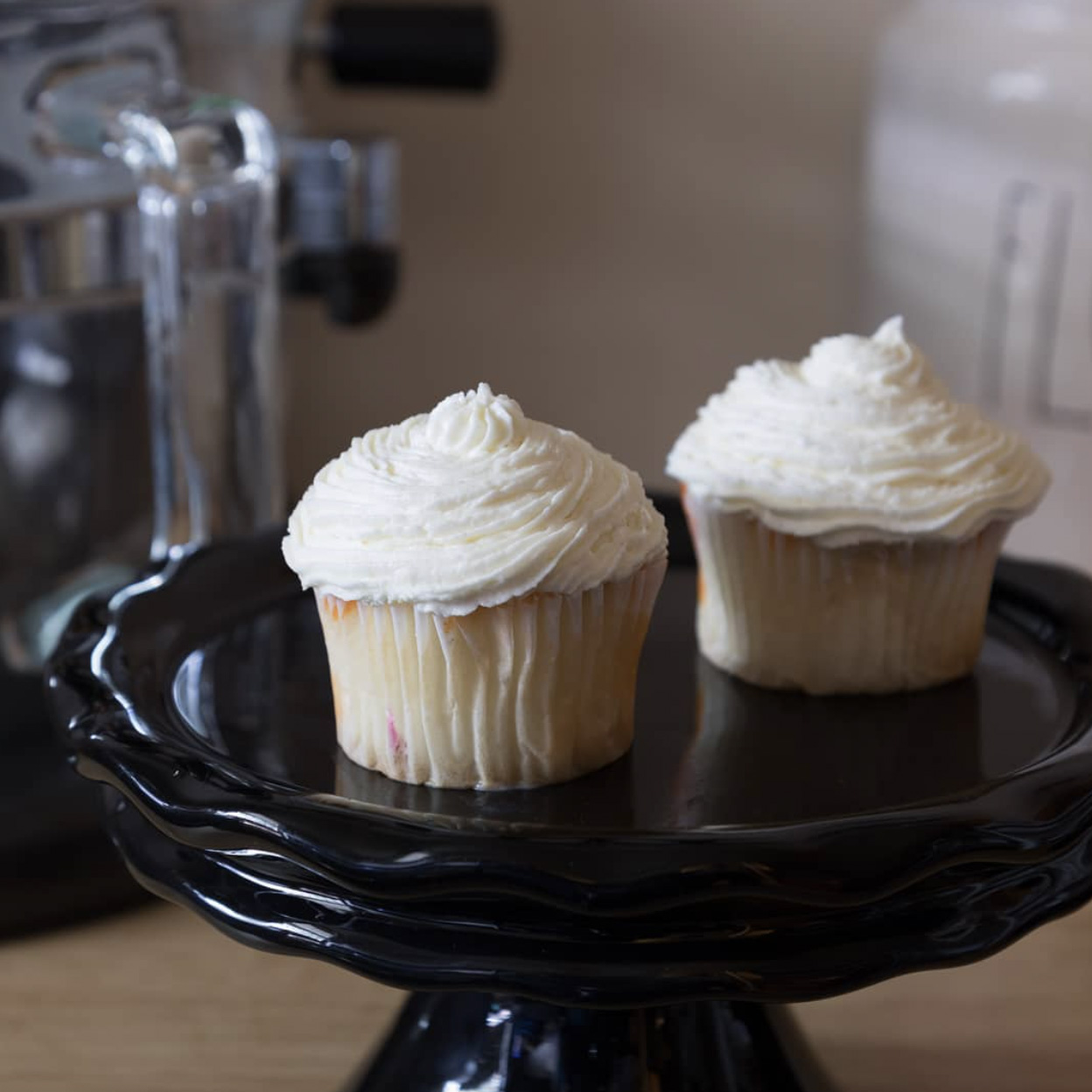 Co-owned by Deonne Wallace and his brother Dave, Natural Blend is a mostly vegan cafe with Caribbean vibes. Do wonders for your body with the detox juice, which blends spinach, apples, carrots, cucumbers, and kale, or feel refreshed with the rejuvenator smoothie, which combines mango, blueberries, pineapple, and goji. Vegan sandwiches, salads, and organic acai bowls are also on the menu. 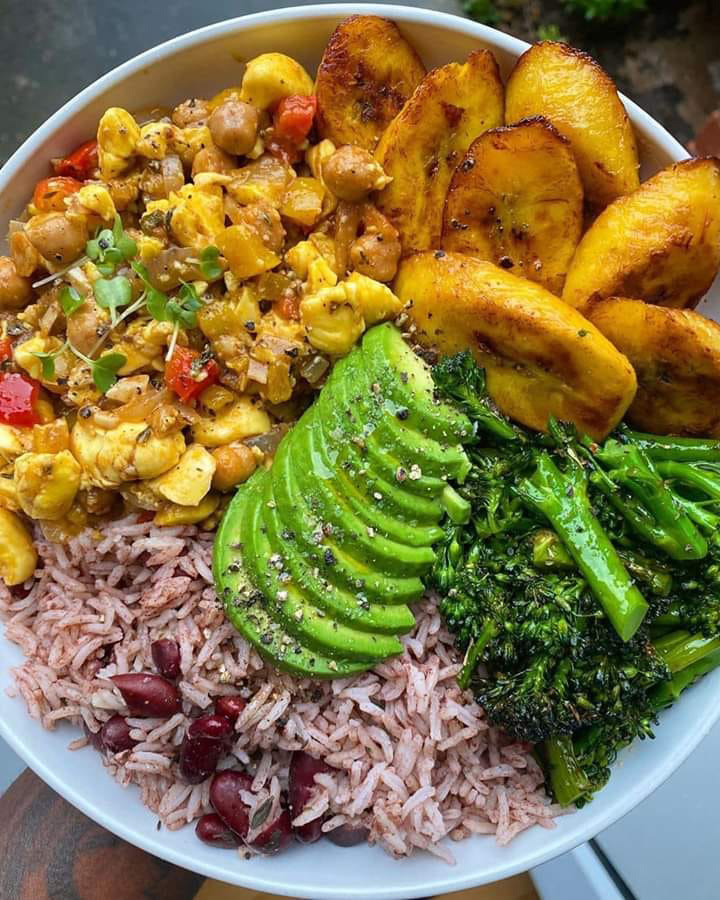