Add these delicious plant-based macs to your shopping list ASAP!

Sure, we love a homemade mac moment, but there’s something so nostalgic about whipping up a boxed mac from the pantry or heating up a cheesy pasta meal from the freezer. Whether you like to mix in frozen peas, pair with steamed broccoli and vegan chicken nuggets, or dowse in hot sauce, you need a tasty plant-based mac to lay the foundation. For the right creamy pasta base, check out these 13 store-bought vegan mac and cheese brands.

Chef-derived vegan mac and cheese, coming right up! These deluxe, creamy cashew-based cheese sauces are such a plant-based foodie vibe. Get in on the tasty eats and find Howl vegan mac and cheese in sharp cheddar style, spicy chipotle, and roasted garlic & herb varieties—there’s a little something for just about everyone! 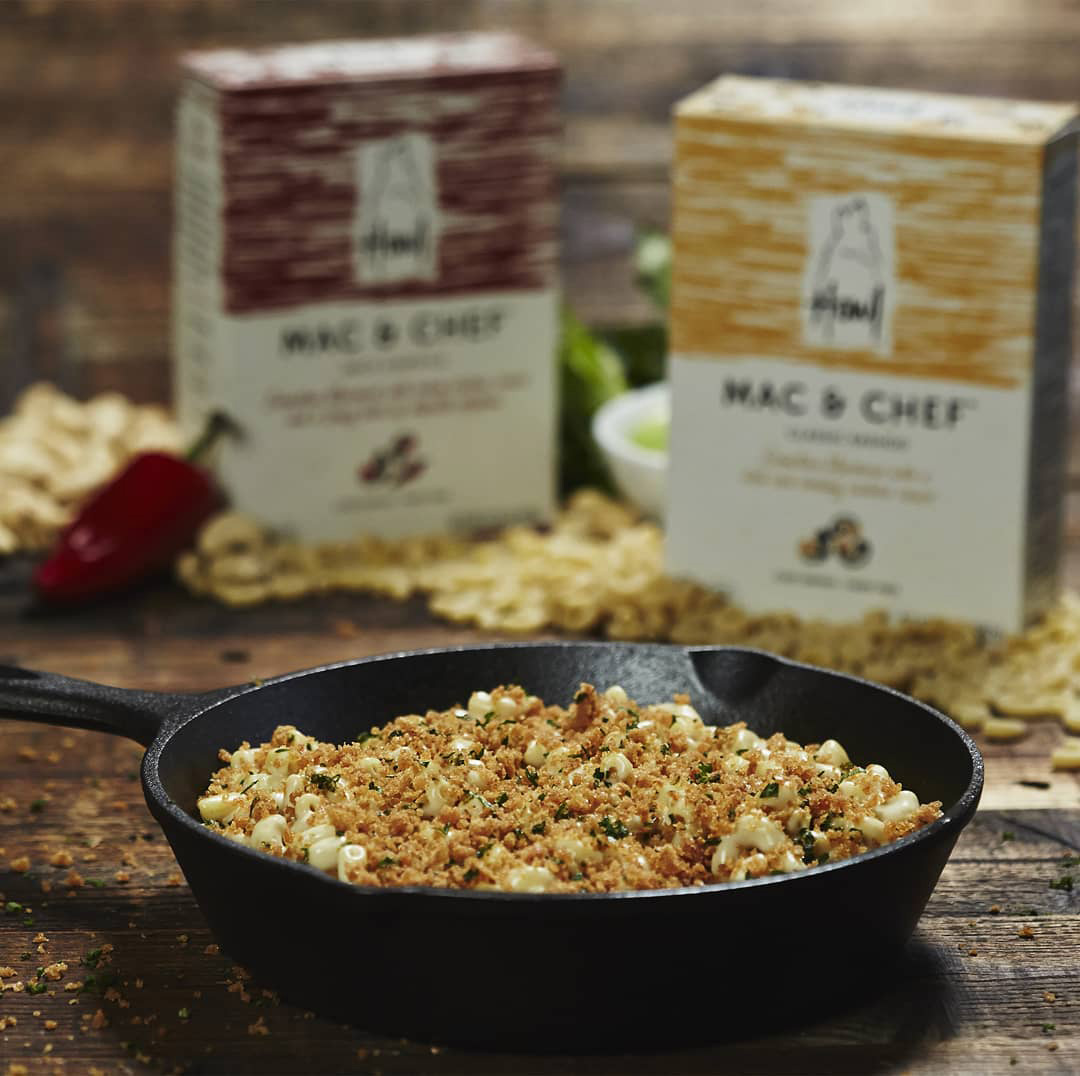 Specializing in chickpea pasta, Chickapea didn’t hold back on the dairy-free mac and cheese. The Chickapea Vegan Mac comes with a creamy pumpkin and sweet potato sauce—we love a plant-forward cheese mixture! If you’re looking for a gluten-free mac packed with protein, fiber, and extra credit veggies, this one’s for you! 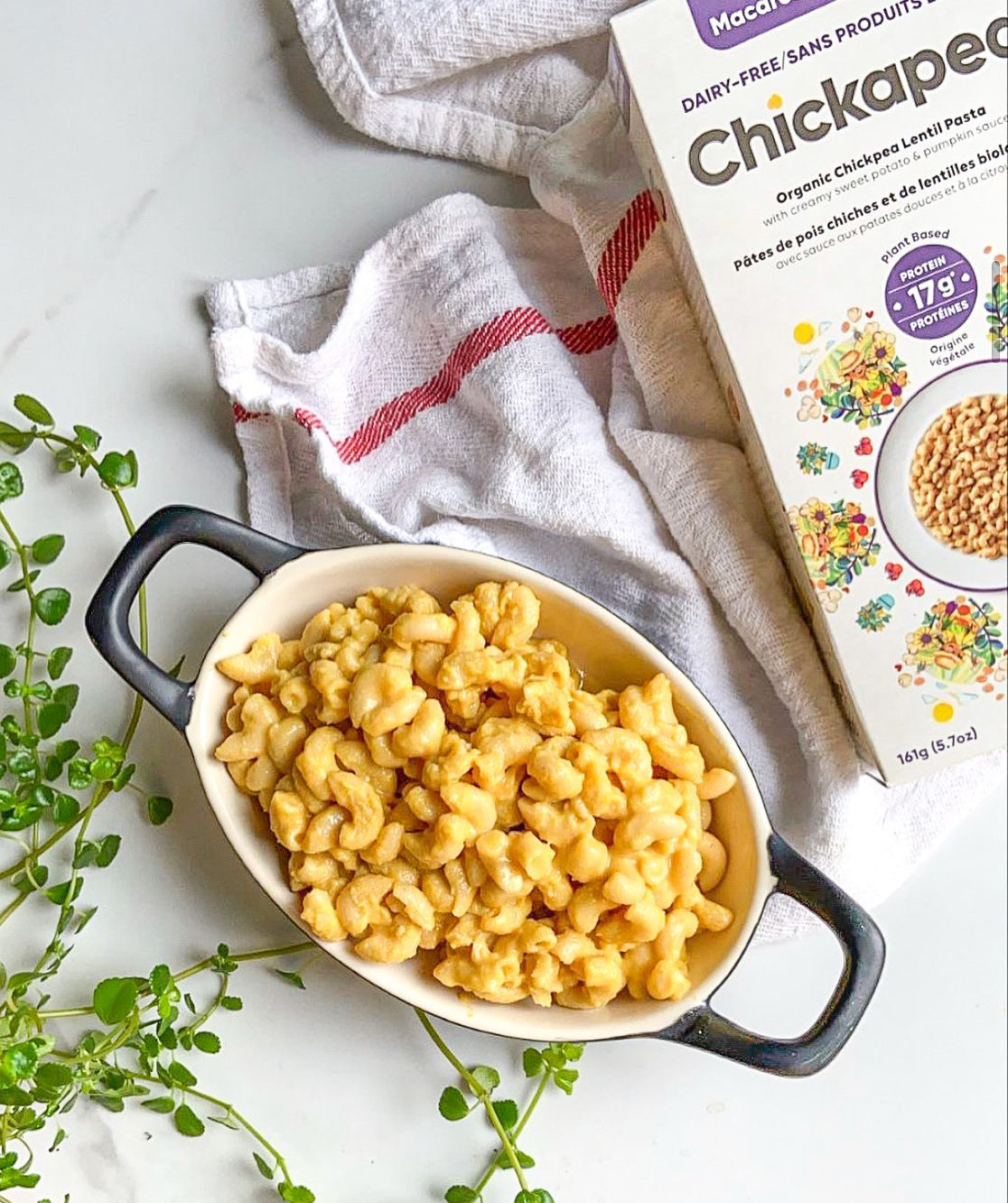 With six vegan varieties of shelf-stable, cheesy pasta meals, the Annie’s Homegrown brand understood the assignment. Check out organic mac options from the “Organic Vegan Cheddar Flavor Mac” to the “Vegan Red Lentil Spirals with Sweet Potato and Pumpkin Sauce” to the “Deluxe Rich & Creamy Shells & Vegan Cheddar” for a quick and comforting dinner at home. 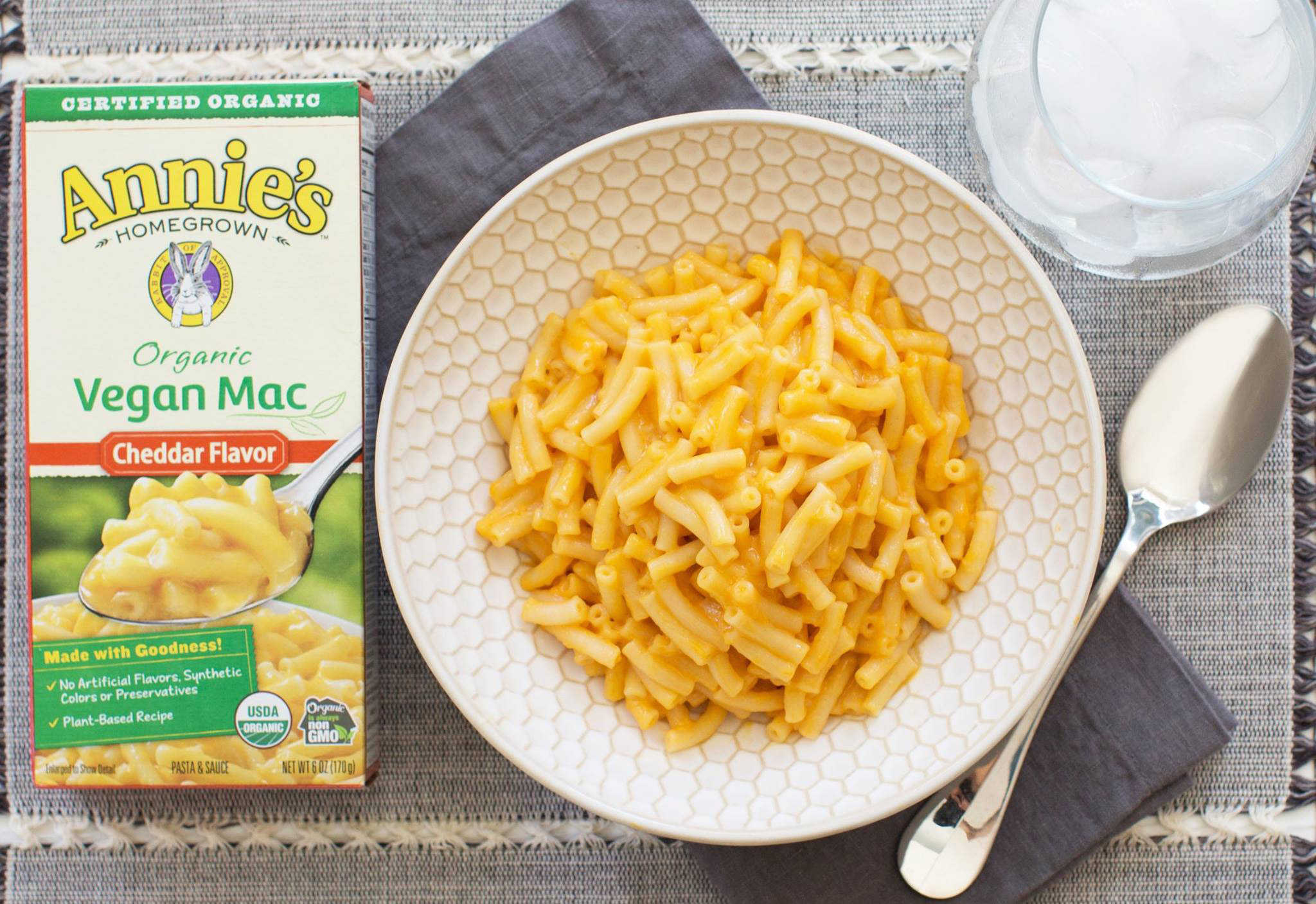 We’re obsessed with Field Roast Chao Slices, and our love for the vegan mac and cheese burns just as bright. Find both Creamy Mac ‘n Chao and Chili Mac ‘n Chao entrees in the freezer section. We like to stash a few in our home and work freezers for when life calls for a cheesy comfort meal ready in minutes. 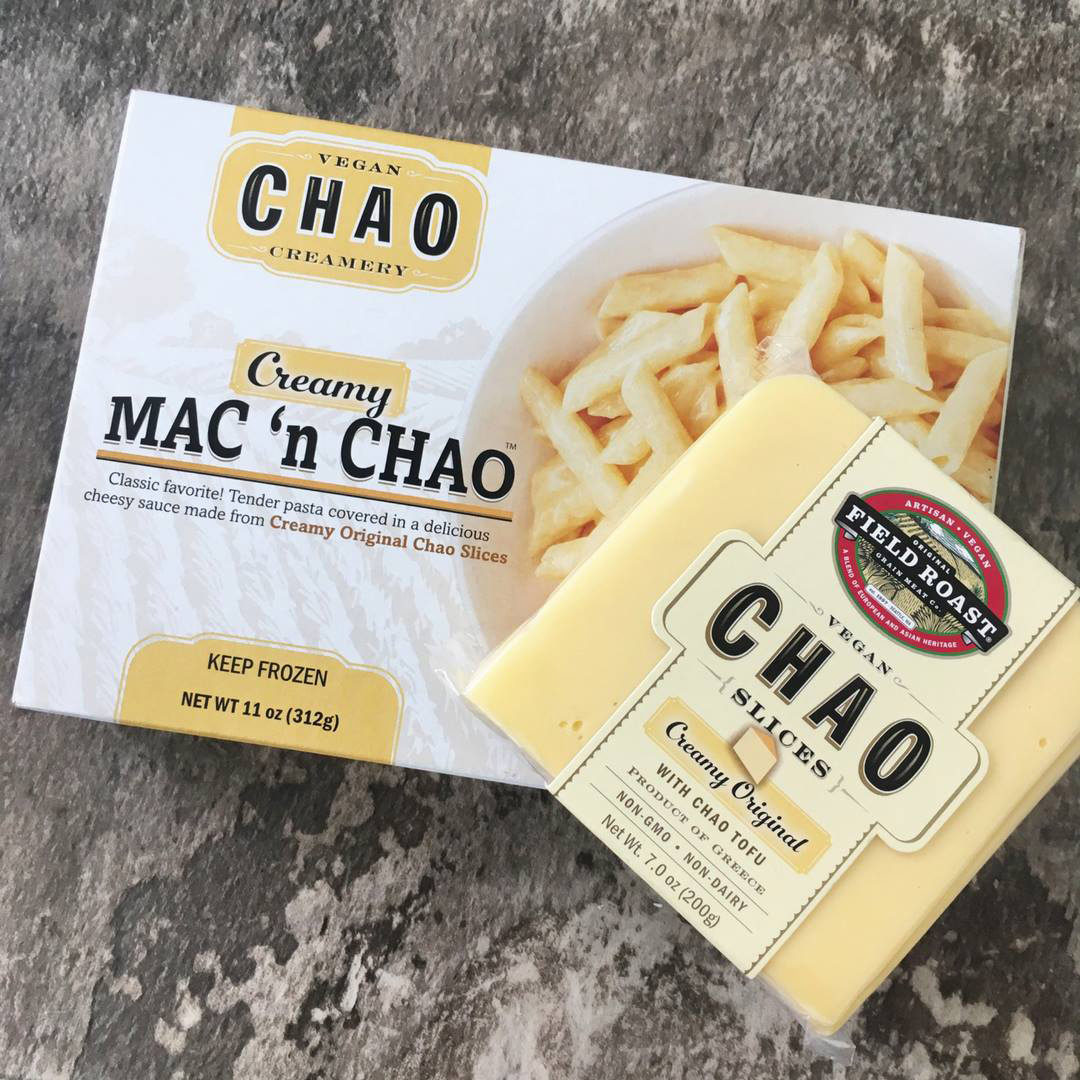 A longtime standby in the world of vegan cheese products, Daiya offers an impressive lineup of plant-based mac and cheese. From cheddar, Alfredo, and white cheddar styles to creamy macs with added herbs and vegan bacon, Daiya has the hookup on shelf-stable pasta dishes that are free from gluten and all animal ingredients. 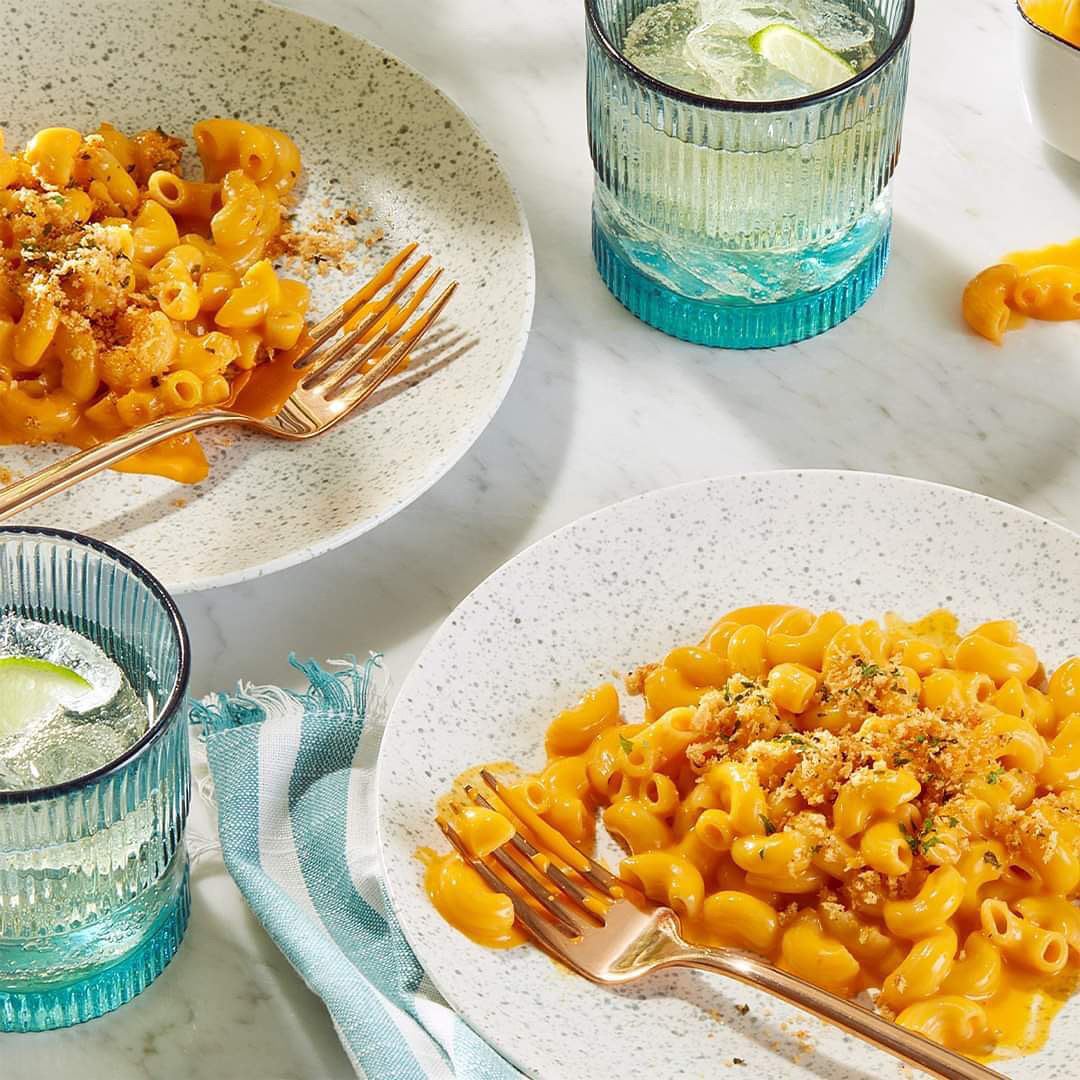 It’s the chickpea pasta we love in a creamy, plant-based cheese sauce. The Banza Plant-Based Mac features a dairy-free cheddar cheese powder ready to be mixed with non-dairy milk and vegan butter—don’t mind if we do. The nutrient-dense mac and cheese contains over 12g of plant-based protein, making it a satisfying choice. Word on the street is that Banza recently launched a Plant-Based White Cheddar Mac exclusively at Whole Foods Market and online platforms. 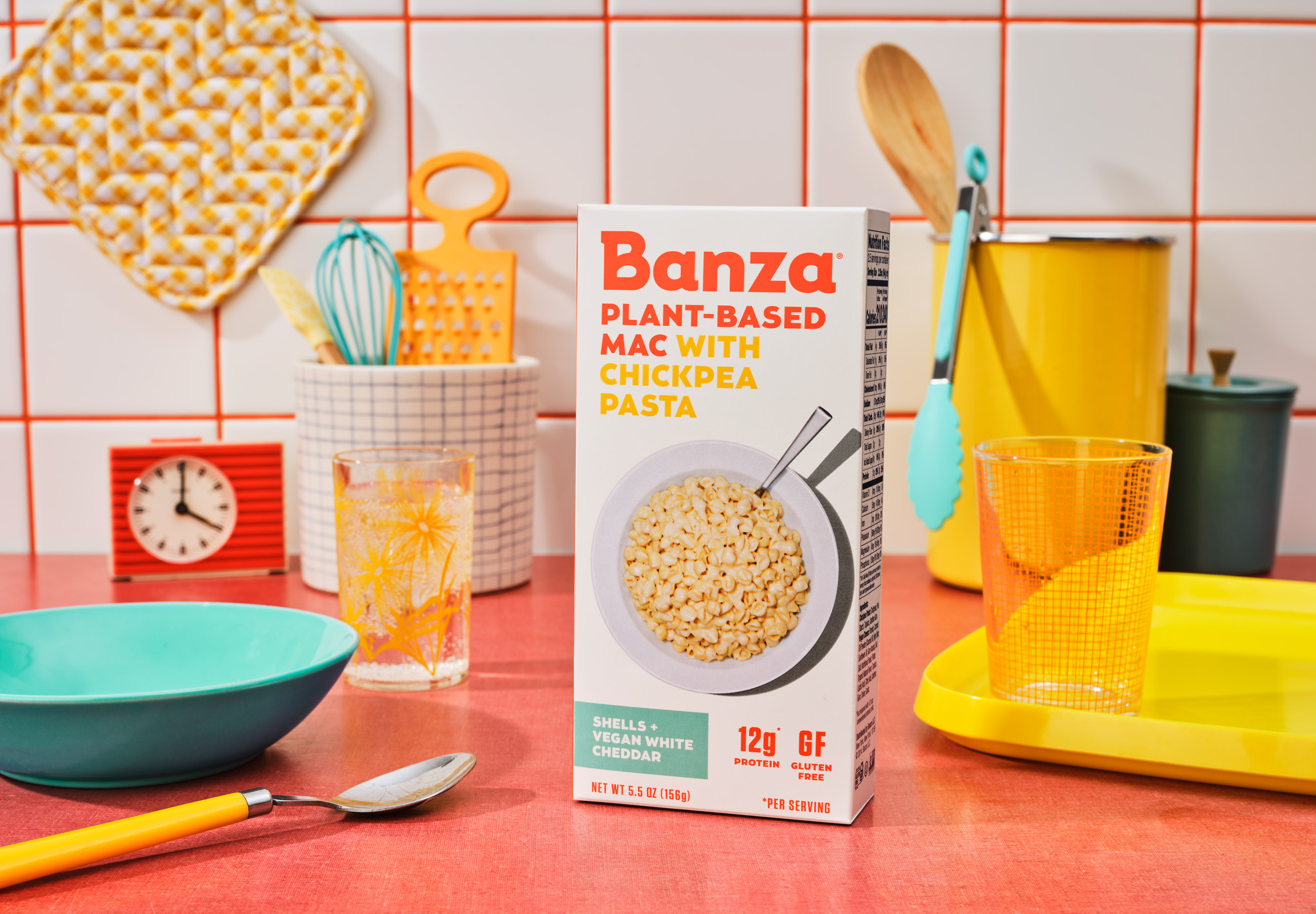 When it comes to vegan mac and cheese, Modern Table knows what’s up. The protein pasta brand offers three different vegan macs to fall in love with—classic cheddar, white cheddar, and spicy Southwest style. We love whipping up a box and mixing in steamed veggies for an extra serving of plant-based goodness. 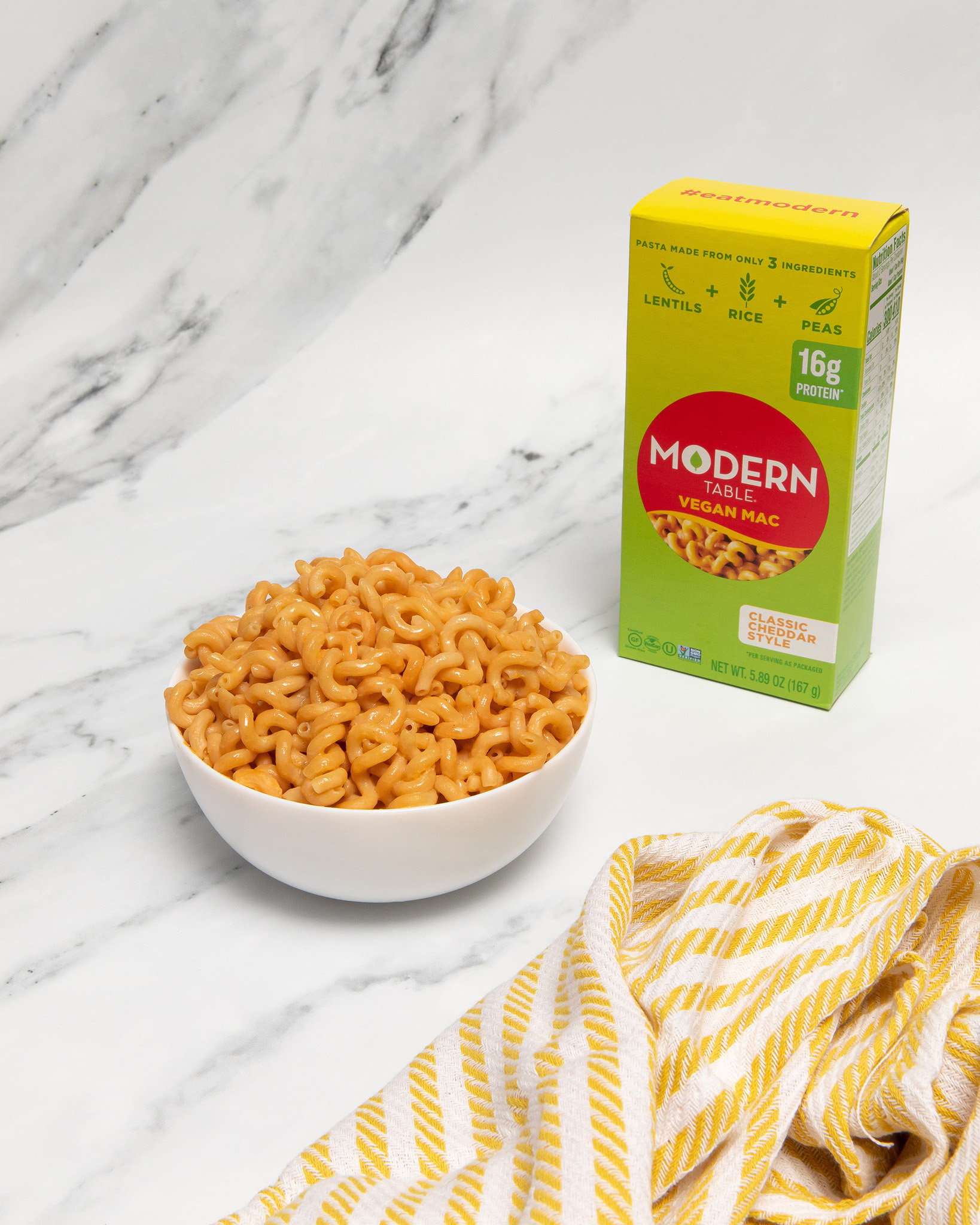 Original Ch’eesy Mac or Ch’eesy Bacon Mac—take your pick. The Upton’s Naturals mac and cheese is not only a comfort food mainstay on the menu of the Chicago cafe, Upton’s Breakroom, but a store-bought favorite as well. And you can’t beat the convenience! Both vegan mac and cheese products can be prepared in minutes—just heat and eat. 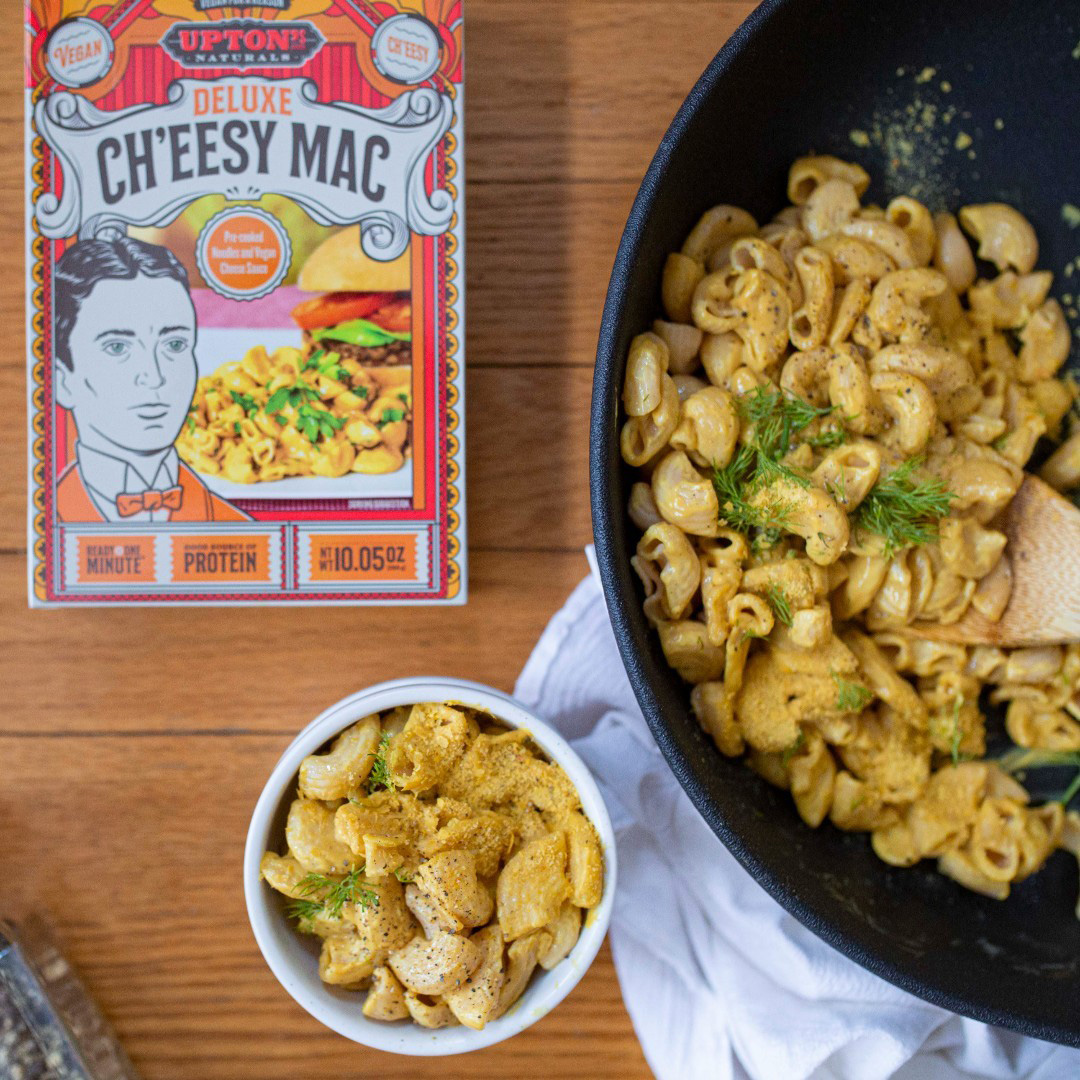 Calling all gluten-free vegan mac lovers—you won’t want to miss this! The Organic Vegan Rice Mac & Cheeze is an absolute freezer staple. Keep a few boxes tucked away for a comfort food classic right at your fingertips. Amy’s Kitchen also carries a Vegan Broccoli and Cheeze Bake for the veggie-obsessed, plant-based eaters. 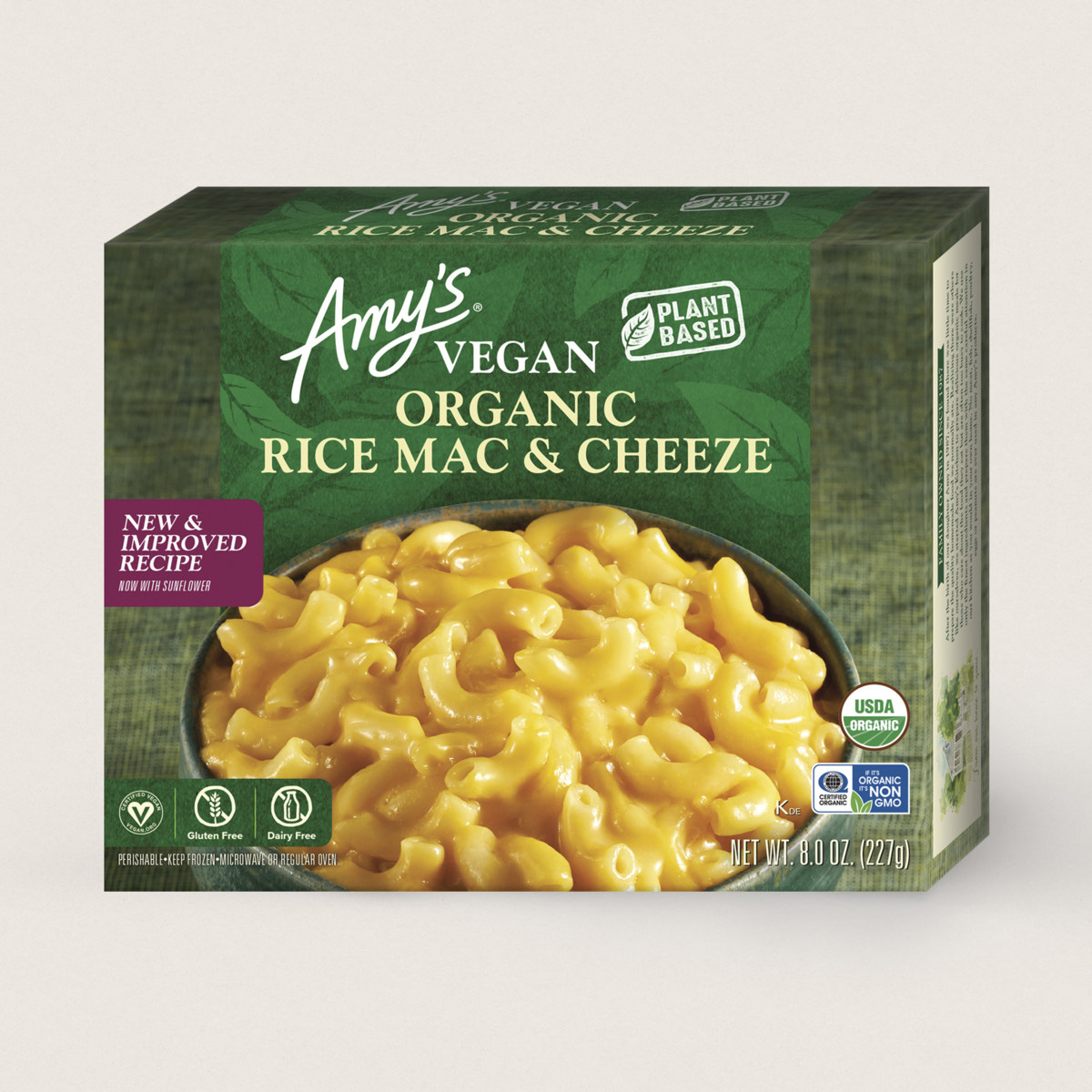 Don’t pass up Road’s End Organics Mac & Chreese! From cheddar style to Alfredo mac, the plant-based brand knows tasty and convenient pasta dishes. We love to stock a few boxes in the pantry for when the nostalgic cravings of boxed mac and cheese come running. Find both traditional wheat-based and gluten-free varieties from Road’s End. 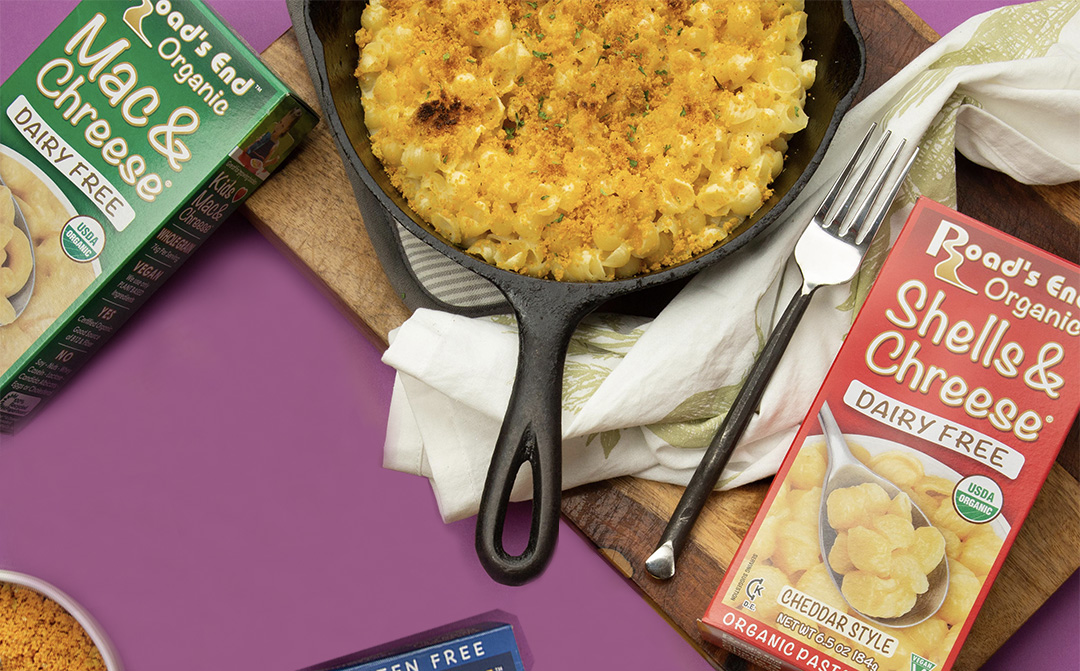 While not all Camp mac and cheese is vegan-friendly, keep your sights set on the electric pink box. Camp Vegan Cheezy Mac is a veggie-loaded pantry standby—peep organic brown rice, zucchini, carrots, corn, and peas in the noodles along with pumpkin, spinach, sweet potato, and mushroom in the vegan mac and cheese sauce. 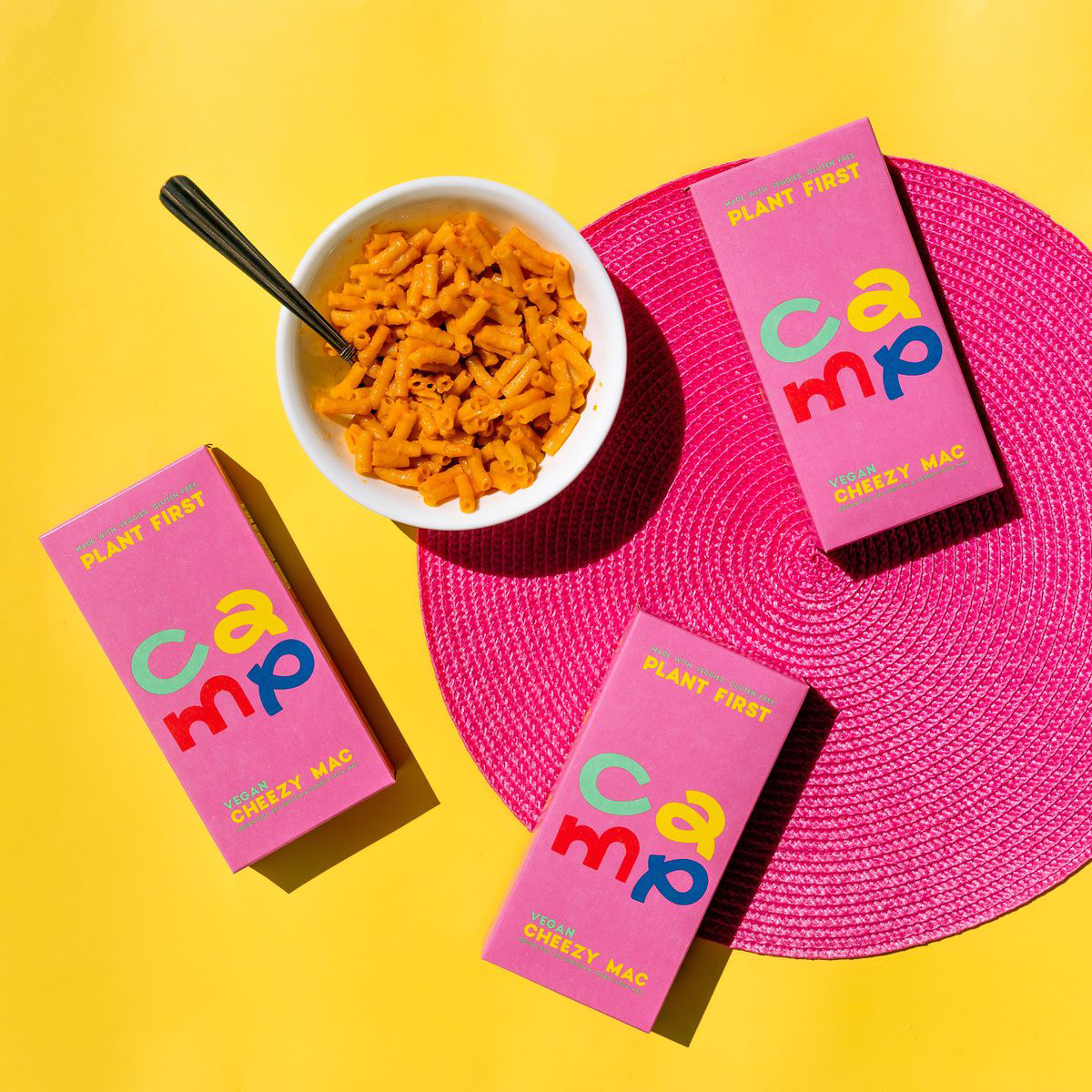 Simple Truth is coming through once again—we love a store brand with vegan options. The Plant-Based Vegan Mac N Cheese is a convenient lunch break choice, because it’s ready in minutes. Picture curly cavatappi noodles and creamy plant-based cheese sauce to break up the day. We’re not drooling, you are! 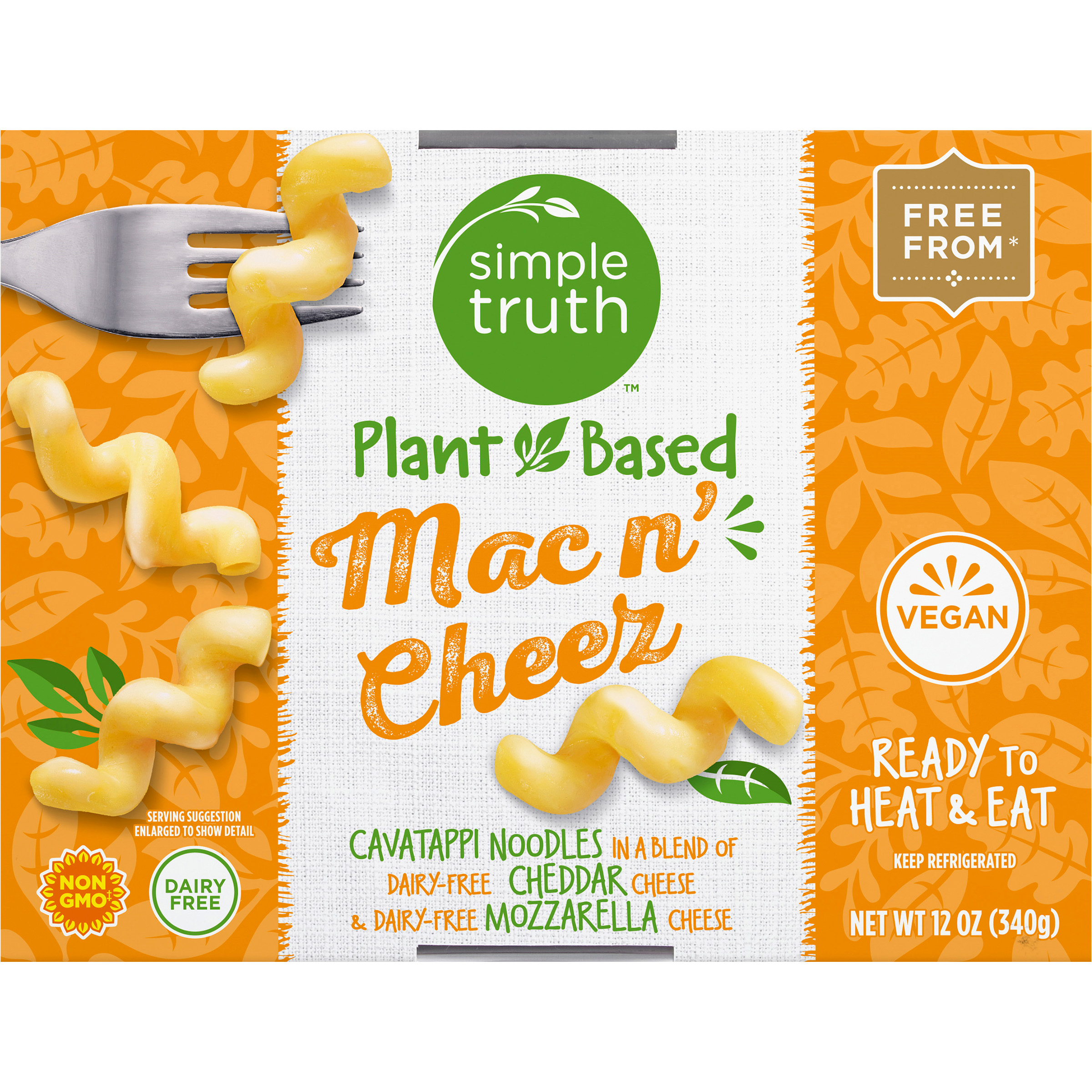 Mac and cheese, just like grandma used to make, but totally vegan! This generational recipe was passed down from Chef Ayinde Howell’s great-grandmother Mary. Howell’s Mac & Yease is creamy, indulgent, ready to bake, and easy to enjoy. Find this vegan mac and cheese at ieatgrass.com along with select Costco and Whole Foods locations. 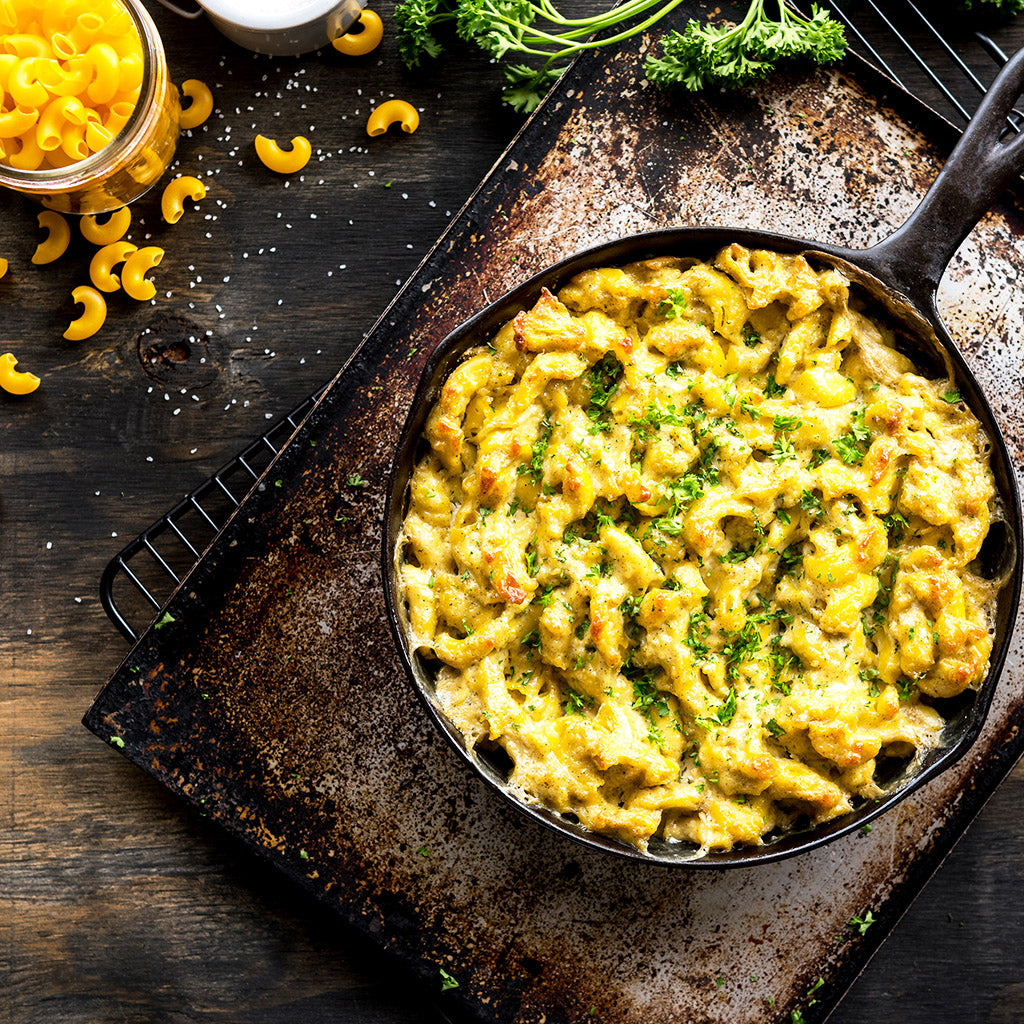 Anja is a plant-based dietitian by day and vegan foodie by night. She offers virtual nutrition coaching for vegan and veg-curious clients. Check out her site for coaching services, recipes, and nutrition tips at vegcentricdietitian.com.