On a blazing summer day or biting cold winter evening, to slurp with chopsticks or shovel in with a fork, versatility is what makes noodles magnificent. All around the Bay Area, you can find noodles of different shapes and sizes, dressed up in a nearly infinite amount of ways. From served in a bowl surrounded by a hot broth to sold by the pound for you to take home and create your own masterpiece, here are six vegan noodle dishes that are some of the best in the Bay Area.

Drive East away from the tall buildings of Downtown San Jose, and keep an eye out for what some may consider an unassuming storefront compared to its "more modern" neighbors some blocks West. Enter the shop's doors, and behold the treasures hidden behind: freshly-made bánh cuá»‘n. Lo Banh Cuon Thanh Tri is one of the only places in the Bay Area specializing in making these thin and silky—some may say slippery as it can test a person's chopstick skills—rice flour-based Vietnamese noodle sheets. There are two vegan options to choose from: plain (bánh không) or with fried shallots folded in (bánh hành). Purchase by the pound to take home and top it with some sliced fried tofu, fresh mint, cucumber, and vegan fish sauce.

After bringing its slurp-worthy bowls of ramen up the coast from Southern California, HiroNori Craft Ramen has expanded their dedicated fan base to the Bay Area. While vegan Japanese-style ramen can be difficult to come across, HiroNori Craft Ramen's vegan ramen swoops in to prove that vegan ramen can have as bright of a spotlight as its meat counterparts on a menu. Their noodles are made fresh with flour imported from Japan, and the luscious sesame miso broth of the vegan ramen is a blend of five kinds of miso, which are also shipped over from Japan.

Tucked inside The Market is where you can order a comforting bowl of laksa with turmeric noodles submerged in a lemongrass coconut milk broth and topped with a medley of fresh herbs and vegetables. Chef and owner Azalina Eusope, a Penang native who grew up surrounded by the Chinese, Indian, and Polynesian/Malay-influenced Malaysian food culture, opened Azalina's in 2015. Since then, her laksa with a broth featuring a festival of spices and chewy noodles has been a hit.

Pharaohs Mediterranean Sandwiches is an Egyptian, family-owned restaurant in Lower Nob Hill and one of the few places in the Bay Area serving up koshari. Pasta noodles are combined with rice and lentils to form the base of Pharaohs' koshari. Ladled on top is a garlic tomato sauce, and garbanzo beans and crispy fried onions are piled on as the ultimate finishers to a very filling bowl of different flavors and textures.

When noodles meet pesto, vegan cheese, and jalapenos on a hot cast iron skillet, you know it's going to be a party to not pass on. Souley Vegan's Sizzlin' Skillet Mac & Cheeze provides a fun time with its contrasting flavors—the jalapenos sprinkled on packing a punch while the creamy pesto "cheeze" sauce coating each rigatoni inside and out comforts. With Souley Vegan's expansion from its original Jack London Square establishment to other parts of the Bay Area (and Los Angeles), we're excited for the party around this mac & cheeze to get bigger and bigger. 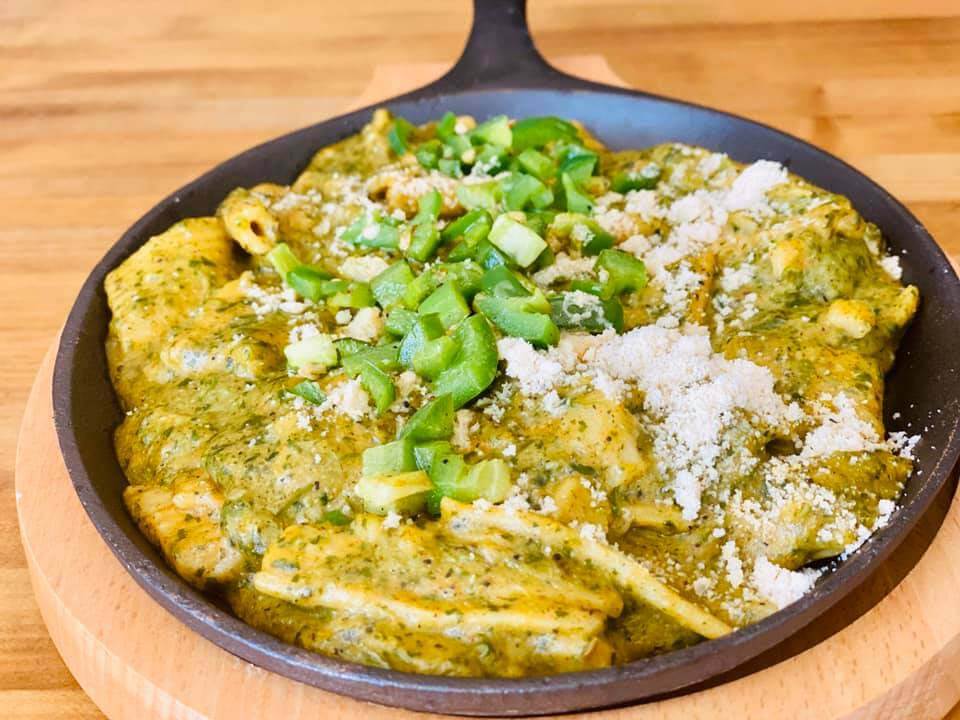 On hot summer days, what is something cold and creamy that should be one of the top things to come to mind? That's right, Kong guk su, a Korean chilled soy milk noodle soup. Sadly, it's not commonly found in many restaurants in the Bay Area (yet), but a cooling bowl awaits every summer at Pyeong Chang Tofu House. Regular kong guk su with wheat noodles are offered, but the buckwheat noodles of the Mo Mil Kong Guk Su gives an added nutty flavor to the dish. At Pyeong Chang Tofu House, the buckwheat noodles are surrounded by a creamy and refreshing soy milk broth—thick and rich from soybeans that are soaked, cooked, and then blended—and finished with julienned cucumbers and a scattering of toasted sesame seeds. 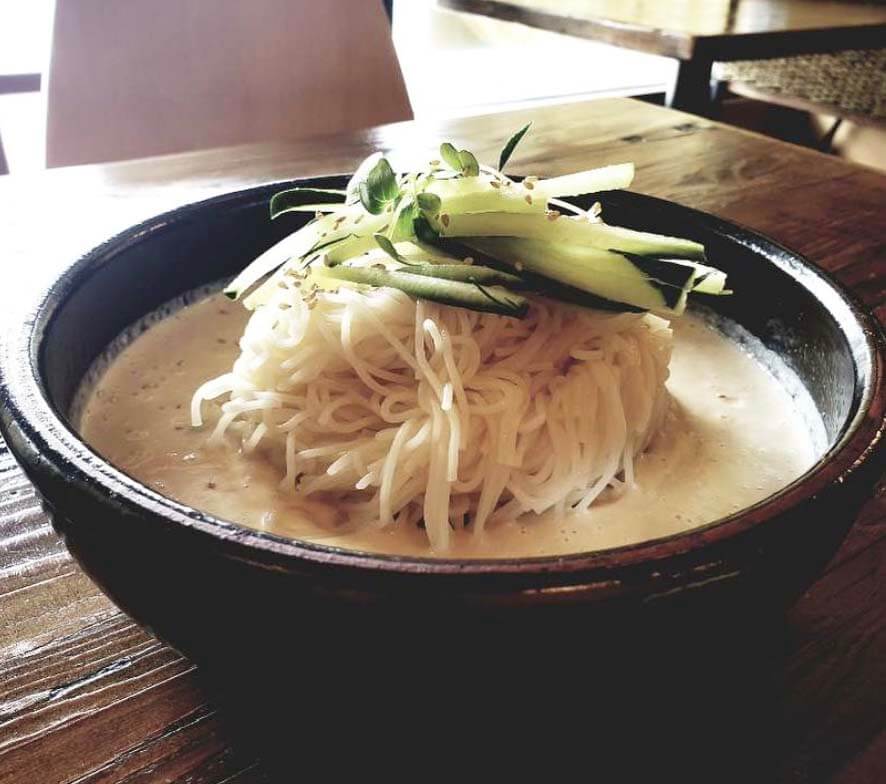 Lisa, a San Francisco native and vegetarian of more than ten years, finds herself always in search of the perfect vegan chocolate chip cookie. Strong Vietnamese iced coffee runs through her veins while she maintains her full-time marketing job, learns new languages, and runs her blog. Follow her weekend adventures as Bánhderella, the self-taught baker eating her way around the San Francisco Bay Area.

What time is it? Time for you to get a new vegan leather watch from Skagen! That’s right, the Danish-inspired accessories brand just launched Aaren Naturals, an eco-friendly watch line featuring leather alternatives made with bio-based materials like apples.

After an unpopular decision to skim its menu back in the summer of 2020—which included a seven-month potato hiatus—Taco Bell is working on a transformational, vegan-friendly addition. The chain announced this week that it is actively testing a vegan meat alternative made from a proprietary blend of peas and garbanzo beans.

Every day is Earth Day when you’re eating plants, but how do you take that eco-commitment one step further and incorporate more reusable and earth-friendly products into your home? With this handy list, that’s how! Whether it’s haircare, body or bum care, period protection, or more, these brands have what you need to reduce your impact on the environment. Here’s our list of 10 brands where you can find zero waste items for your bath and beauty needs.

You know we love any restaurant that provides stellar vegan options. This Earth Day, though, we want to focus on restaurants around the country that go above and beyond when it comes to doing good for the environment. From sourcing local, regeneratively farmed ingredients, to powering the restaurant with renewable energy, here are some eco-conscious spots we think you should have on your radar.

A slice of cheesy pizza goodness always hits the spot! Metro Detroit is known for its wide variety of pies, including Detroit-style, thin-crust, and Napoletana. There are so many options to delight your taste buds! Whether you’re planning a night in or going out, check out these 10 spots for vegan-friendly pizza in Metro Detroit.

Whether you’re an avid runner or yoga enthusiast, having comfy and eco-friendly athletic wear at your disposal is always a plus. From flexible leggings to colorful crop tops, you’ll be sure to find pieces to fit your active lifestyle. Here are 13 sustainable activewear brands to add to your wardrobe today!

Dating for vegan singles just got a whole lot easier thanks to the team at Beyond Meat and Tinder!

Are you a fan of housemade or Impossible burgers? These Windy City restaurants have got you covered! Here are 10 spots to find vegan burgers in Chicago. (Don’t forget to wear your stretchy pants!)