Where to Get Vegan Tamales in Los Angeles

Are you team rojo or verde?

Let’s talk about vegan tamales! The popular Mesoamerican dish is made from masa dough with a bean, cheese, meat, or vegetable filling that’s wrapped in a corn husk and steamed to perfection. While vegan tamales are enjoyed year-round, it’s a holiday tradition to make, share, and eat them as a part of the celebration of Las Posadas. Want to unwrap the tastiest present of them all? Here’s where to get vegan tamales in LA! 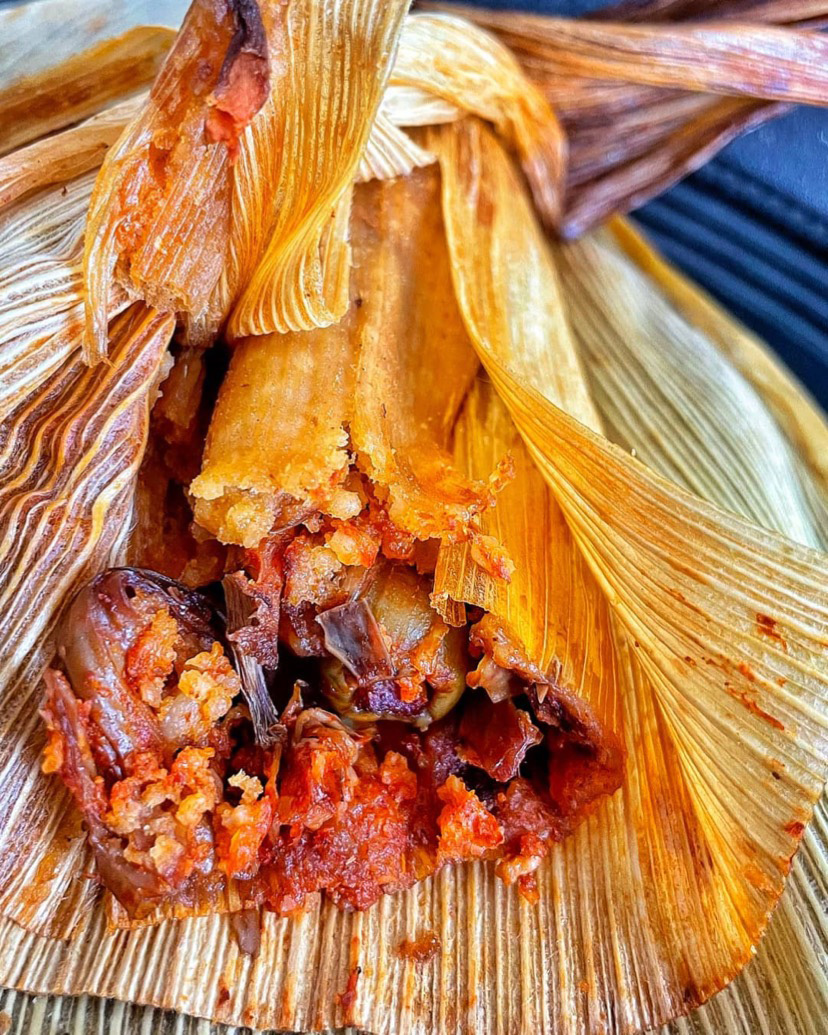 If you want vegan tamales that are A+ in both taste and presentation, order from Shane’s Tamales! This pop-up specializes in classic vegan tamales as well as loaded boat versions topped beautifully with pickled onions and cultured cashew crema, among other ingredients. The tamal flavors range from green chicken and red pork to bean & cheese with rajas and spinach. 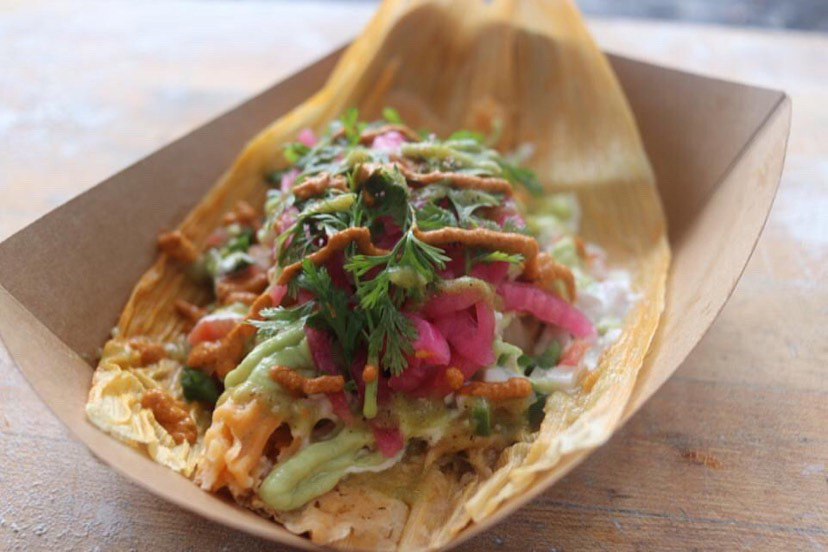 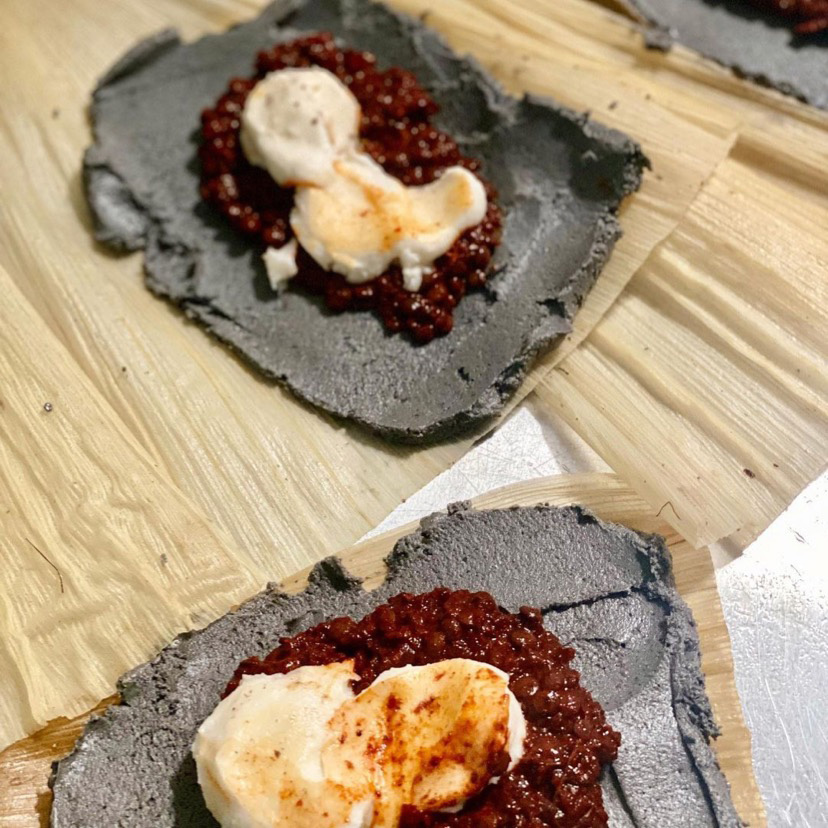 This vegan eatery is selling vegan tamales to take home for the holidays. Choose between their artichoke mole verde or jackfruit barbacoa flavors, or get half and half, and consider Christmas dinner planned! 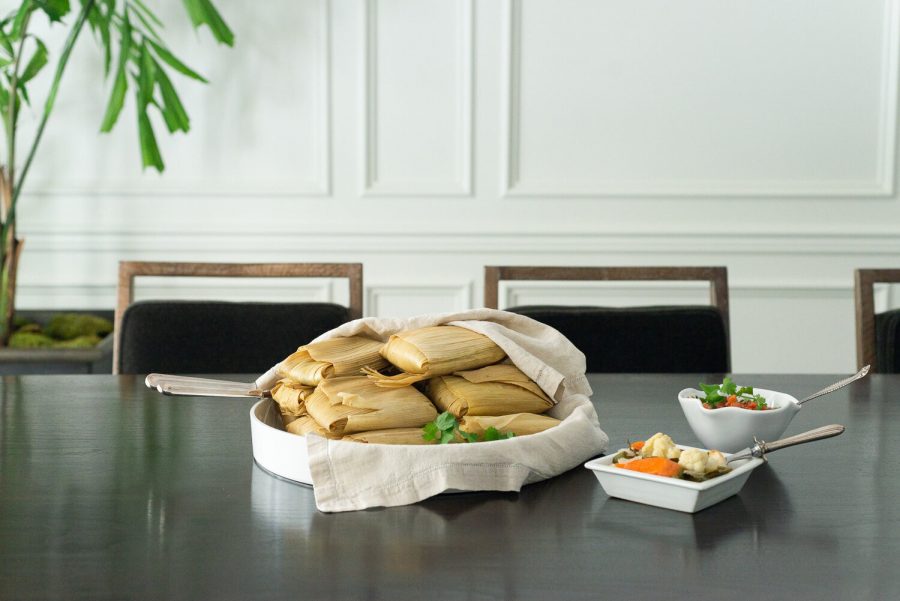 This December, Señoreata is offering two tamal flavors for pre-order and pickup. First is a purple sweet potato, cheese, caramelized shallot, and kale tamal. The second is a lechón sofrito tamal filled with grilled mojo marinated jackfruit lechón with a sofrito of bell peppers, onions, and garlic in a wine reduction. Both varieties can be pre-ordered now for pickup on December 19 or 20. They’re frozen and vacuum-sealed, so we’d suggest stocking up for the winter! 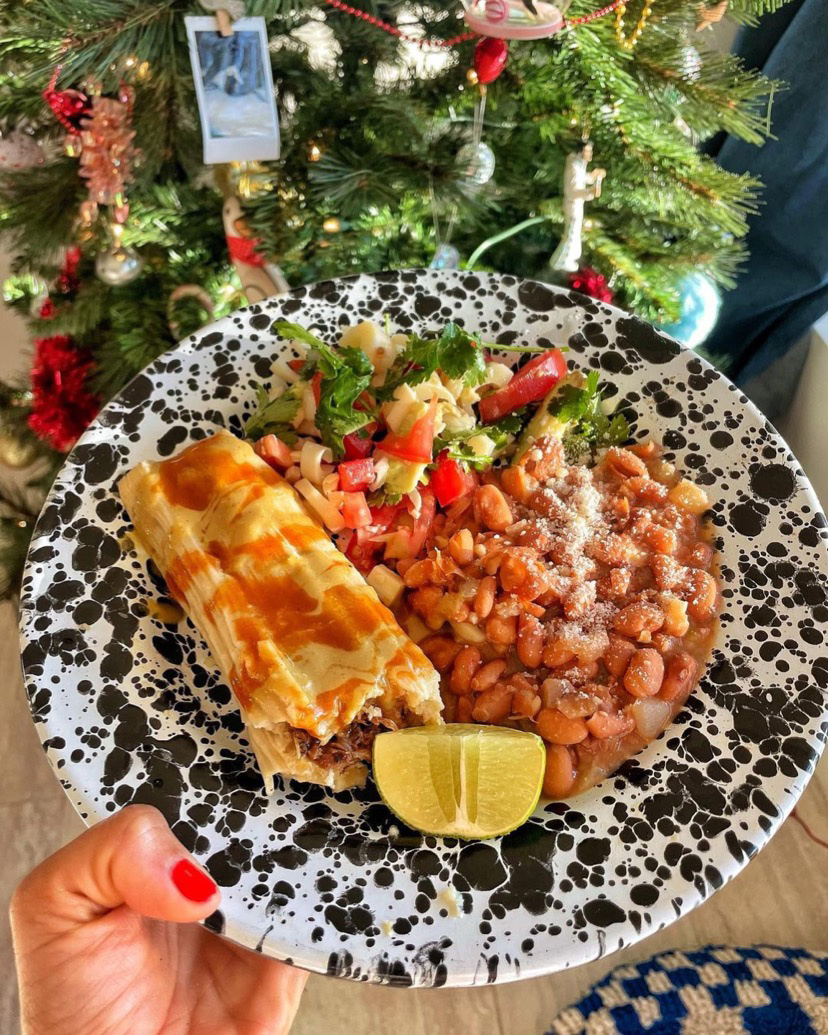 This locally owned pop-up draws menu inspiration from the owner’s mom’s Mexican homemade dishes as well as barrio street food and Asian comfort foods. If you want to end the year on a high note, pick up some of Másaya’s verde and rojo tamales. The verde tamales are filled with spinach, mushroom, and roasted peppers. The rojo tamales are loaded with carne con chile. 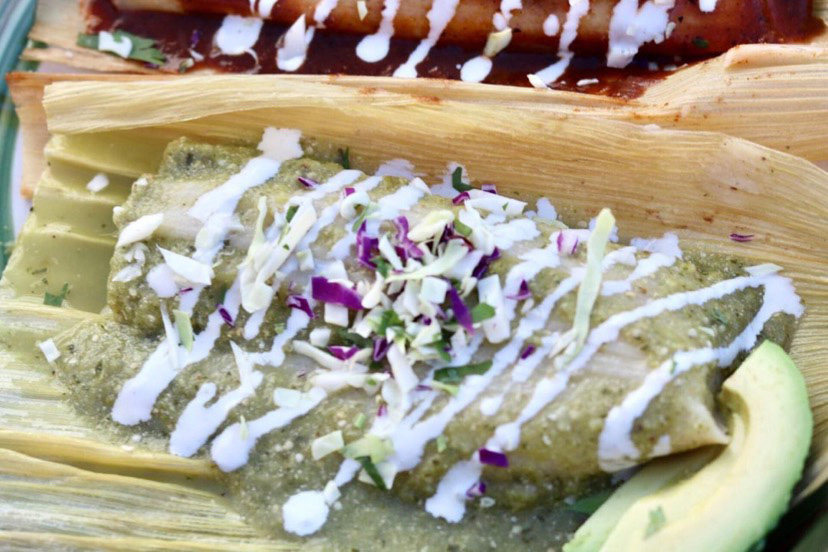 What time is it? Tamal time! Pacha Taco is known for their quesa birria tacos, so it’s only natural they’d debut birria tamales, right? If you’re looking to expand your palate beyond the classic red and green varieties, be sure to order some of these drool-worthy vegan tamales. 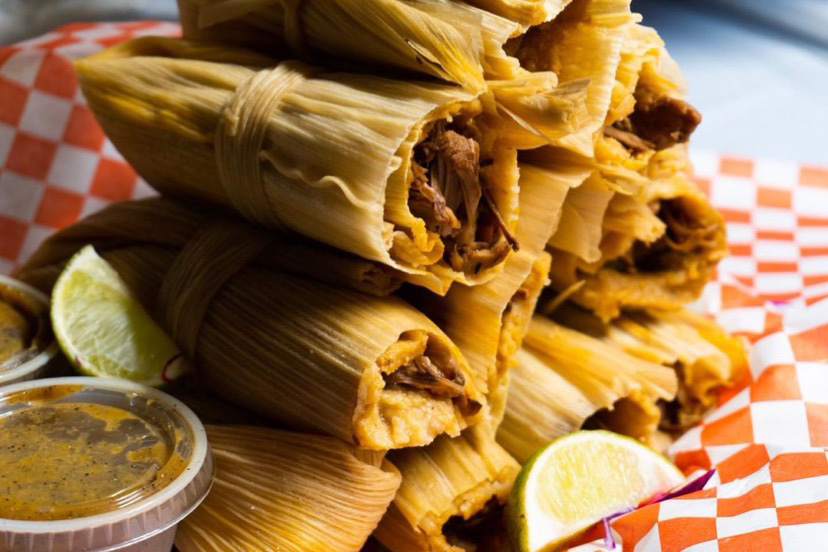 The tamales from this vegan-friendly restaurant are some of the best in town! Their craveable tamal flavors include mole with cactus & potatoes, sweet corn, jackfruit verde, jackfruit rojo, and queso jalapeño. Order your flavor of choice by the dozen, or get a holiday mixed dozen! If you’d like to balance things out with other vegan Salvadoran noms, grab some pupusas, ceviche, rice, beans, or plantains. 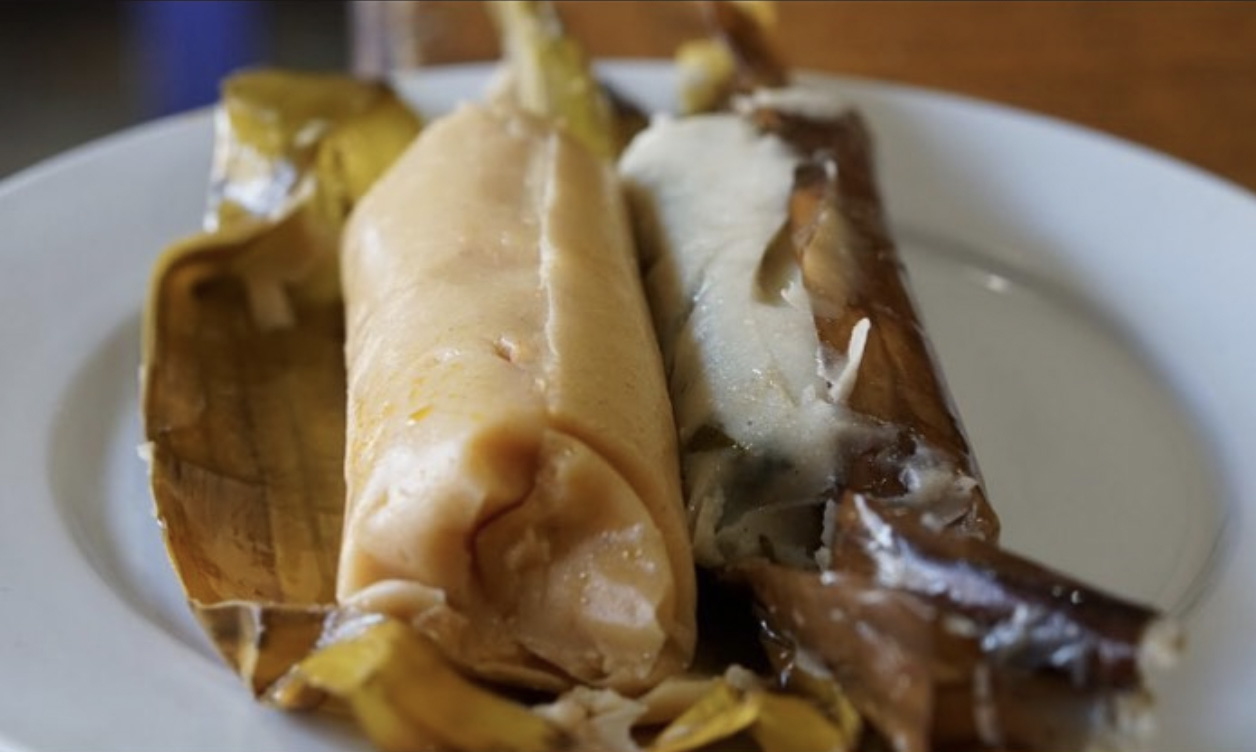 If you live in the Inland Empire and don’t feel like driving to Central LA to load up on vegan tamales this year, we have the perfect spot for you! The amazing Oasis Vegetarian Cafe offers vegan spinach tamales that are out of this world. They’re served with tomato salsa and dairy-free cream that pair beautifully with the seasoned corn masa. 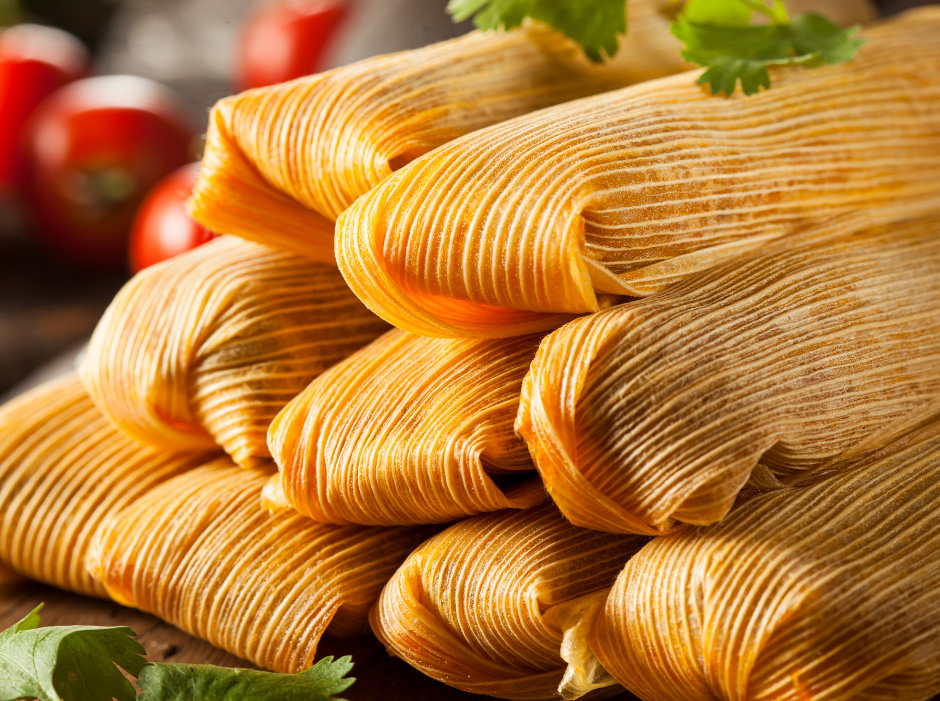 This tamaleria has quite the show-stopping selection of plant-based fillings! What are they? Cactus, mushroom, beans, and red jackfruit. Complete your meal with beans, rice, and aguas frescas. 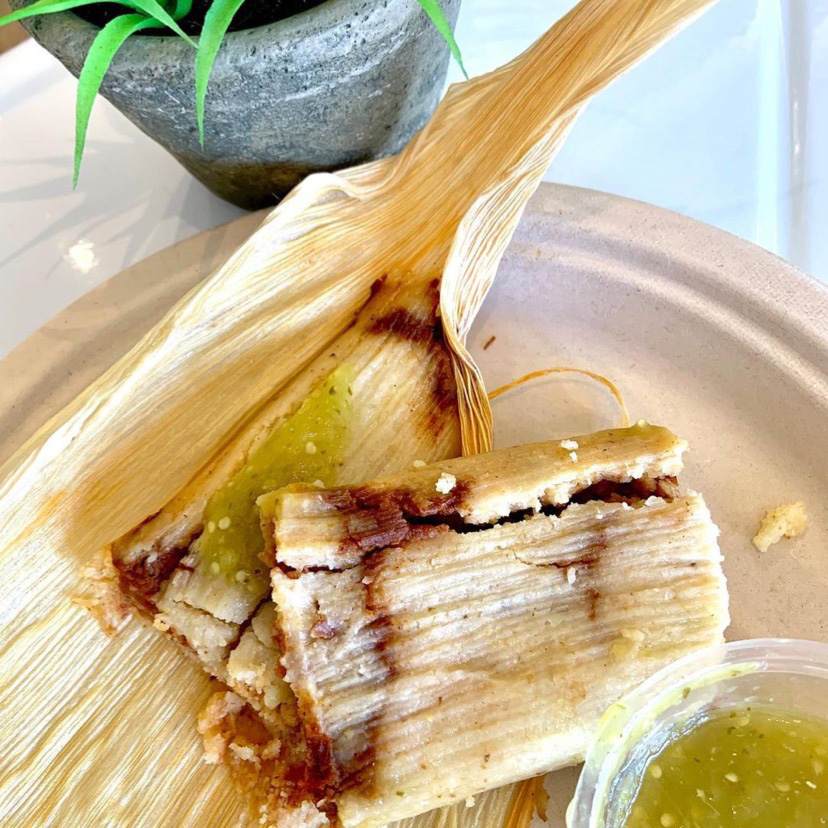