Orlando’s culinary scene has exploded in the past five years, and with it, its vegan scene has blossomed. Not only are you able to choose between dozens of vegan-exclusive savory vendors, but you can also score some of the nation’s most decadent and unique dessert experiences. Here is our roundup of Orlando’s top 10 vegan desserts.

Before completely falling into a vegan meatloaf food-coma, you have to try Ethos Vegan Kitchen’s deliciously decadent affogato. In this modern take on the Italian treat, layers of creamy, vanilla soy milk ice cream are covered in and submerged with sultry espresso. Ethos Vegan Kitchen, based in Winter Park, is the queen of hearty vegan meals, so an equally satisfying dessert was no problem for them. For extra indulgence, order your affogato with a house-made vegan chocolate cookie.

What happens when you combine two all-American favorites in one delicious dessert? You get a new veganized American classic—the PB&J Ice Cream Sandwich! Winter Park Biscuit Company at East End Market (known for their vegan fried chicken) serves up this sandwiched treat on a Nutter Butter Cookie, with refreshing vanilla ice cream swirled with strawberry jam in the center. 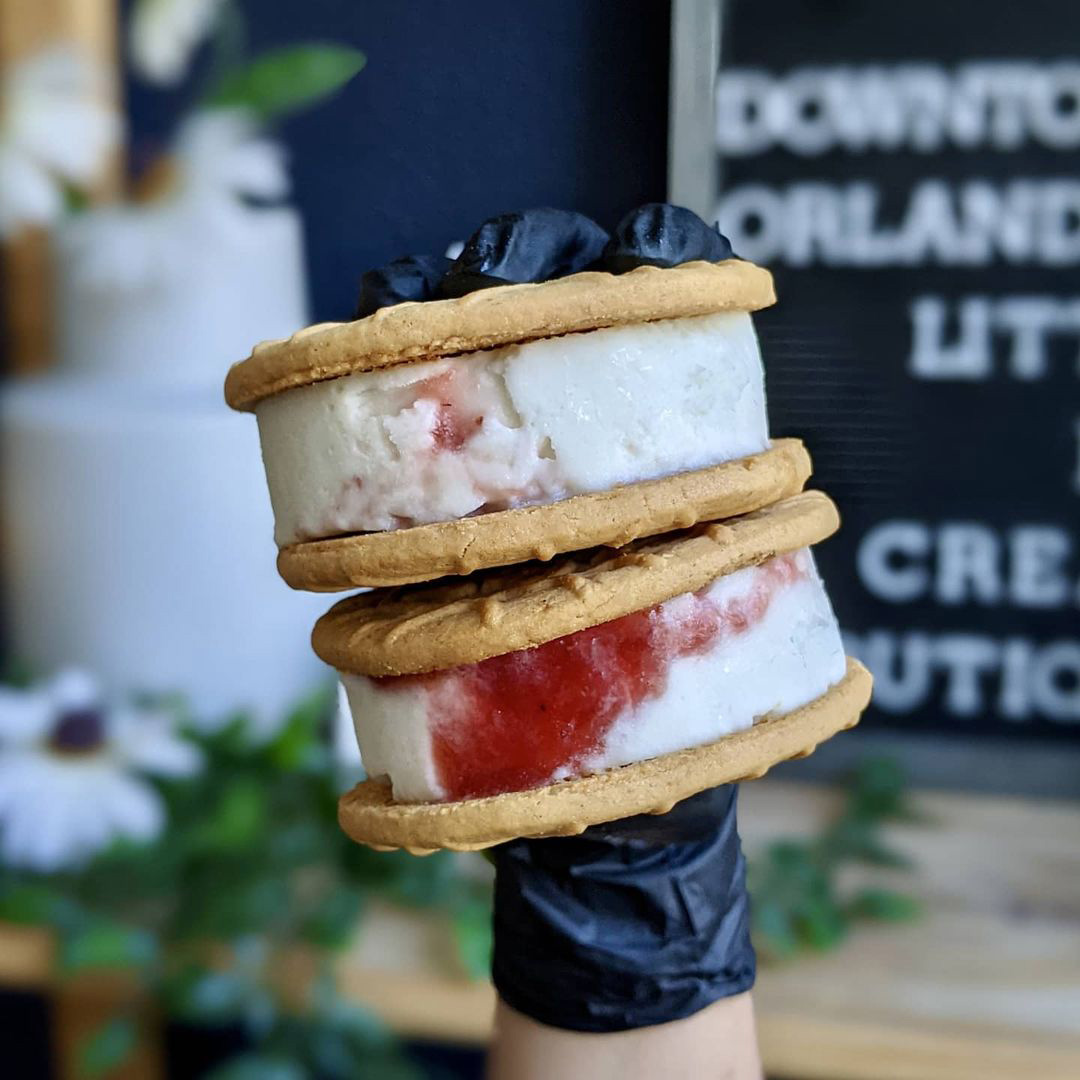 At the Dharma Southern Kitchen stand in Henry’s Depot, you can find a wide selection of Juniper Patisserie products on display. Among slices of hummingbird cake, seasonal cheesecakes, and crunchy biscotti, their Blueberry Key Lime Pie Jars take the (jar) cake. Layers of creamy, smooth Key Lime Pie interact with fluffy whipped cream and jammed blueberries. What a Southern treat! 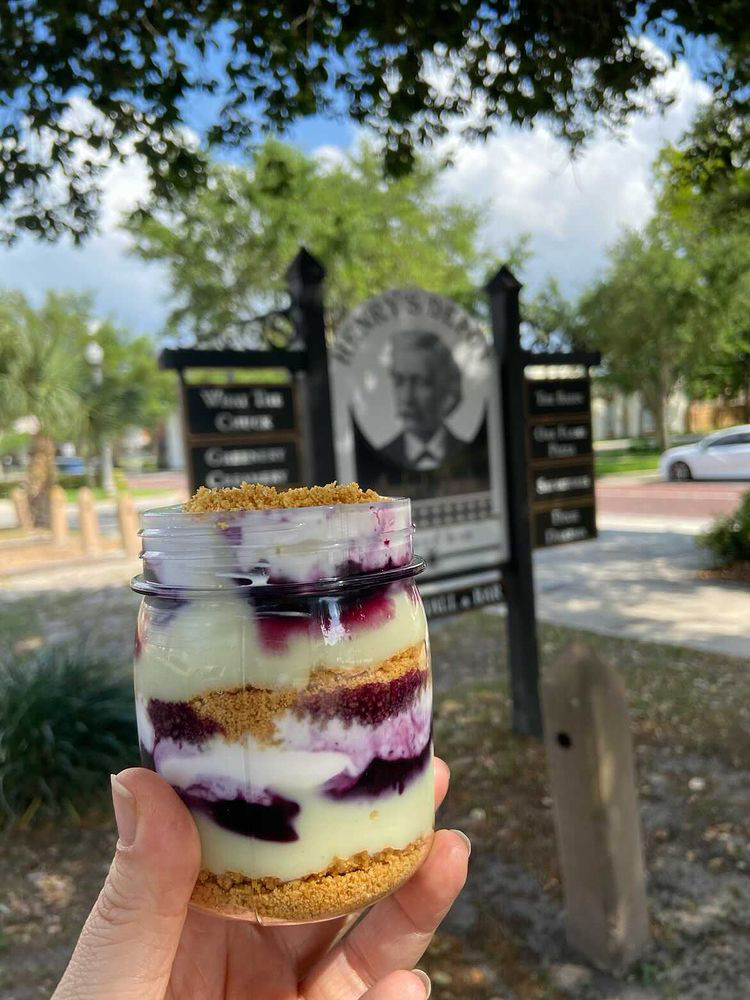 Erie’s Cream inside DaJen Eats Cafe & Creamery is Chef Jen’s brainchild. Each day new ice cream flavors are being piloted and tested, pushing creative boundaries and producing incredibly creamy, decadent flavors. DaJen Eats Cafe & Creamery is an all-vegan Jamaican restaurant, so you can expect to find both classic flavors and some with a bit more flair, such as Rum Raisin the Roof and Unleash the Dragon Stout. The best way to enjoy Erie’s Cream? Choose a flavor and have them turn it into a milkshake! You can thank us later.

If you live anywhere near the University of Central Florida, you probably know about Valkyrie Donuts. Famous for their flakey, buttery vegan donuts, Valkyrie serves up hundreds of unique square-shaped donuts each day with high demand. To get your own helping of cronuts, follow them on Instagram for the latest flavors and act fast! Once they’re out, they’re out. 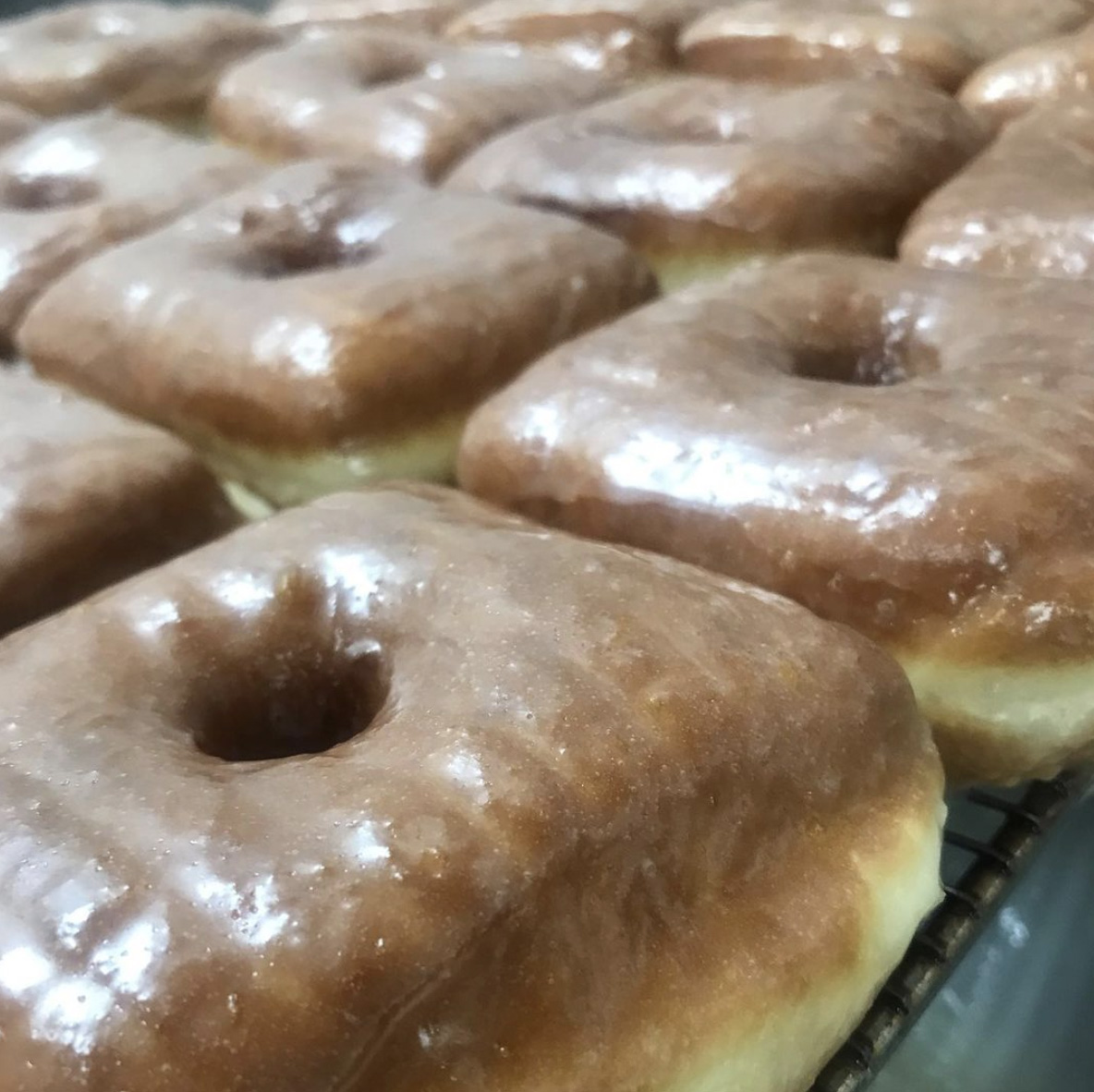 Market on South is the home to Orlando vegan legends Dharma Southern Kitchen and Valhalla Bakery. Valhalla Bakery’s Norse-inspired vegan bakery develops cakes, cookies, and seasonal sweet creations to serve Orlando’s (Almond) Milk District. Particularly delicious are their moist Creamsicle Buns, which feature both soft vanilla cream and an orange punch. No trip to the area would be complete without grabbing a treat (or twelve) to bring home! 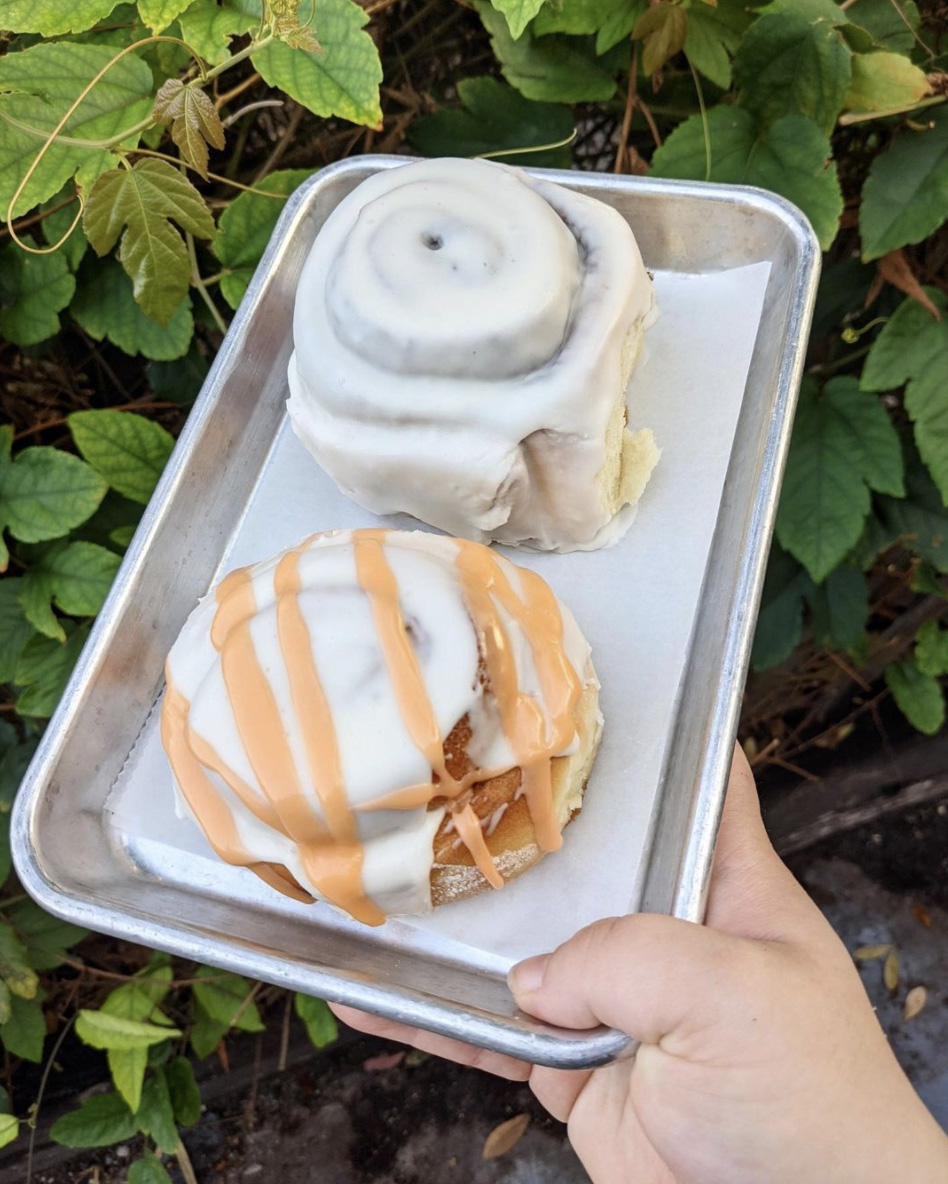 If you’re looking for high-class vegan treats in Orlando, look no further than Kres Chophouse. Nestled Downtown, Kres Chophouse offers a special three-course vegan menu, complete with your selection of a vegan dessert. This sophisticated dessert features dairy-free vanilla ice cream, chocolate sauce, caramel drizzle, and mint. The dish is large enough to share with a loved one, delicious enough to finish yourself. Visit Saturdays for additional exclusive offerings.

Universal’s CityWalk is home to the Orlando location of Portland-based cult favorite Voodoo Doughnut. About half of Voodoo Doughnut’s menu is vegan, meaning you can enjoy all your favorites, including Maple Bar, Portland Cream, PB&J, and the donut that made them famous: the Voodoo Doll. This visually compelling donut features a vegan donut base filled with raspberry jelly, Voodoo face pipings, chocolate frosting, and a pretzel stake. 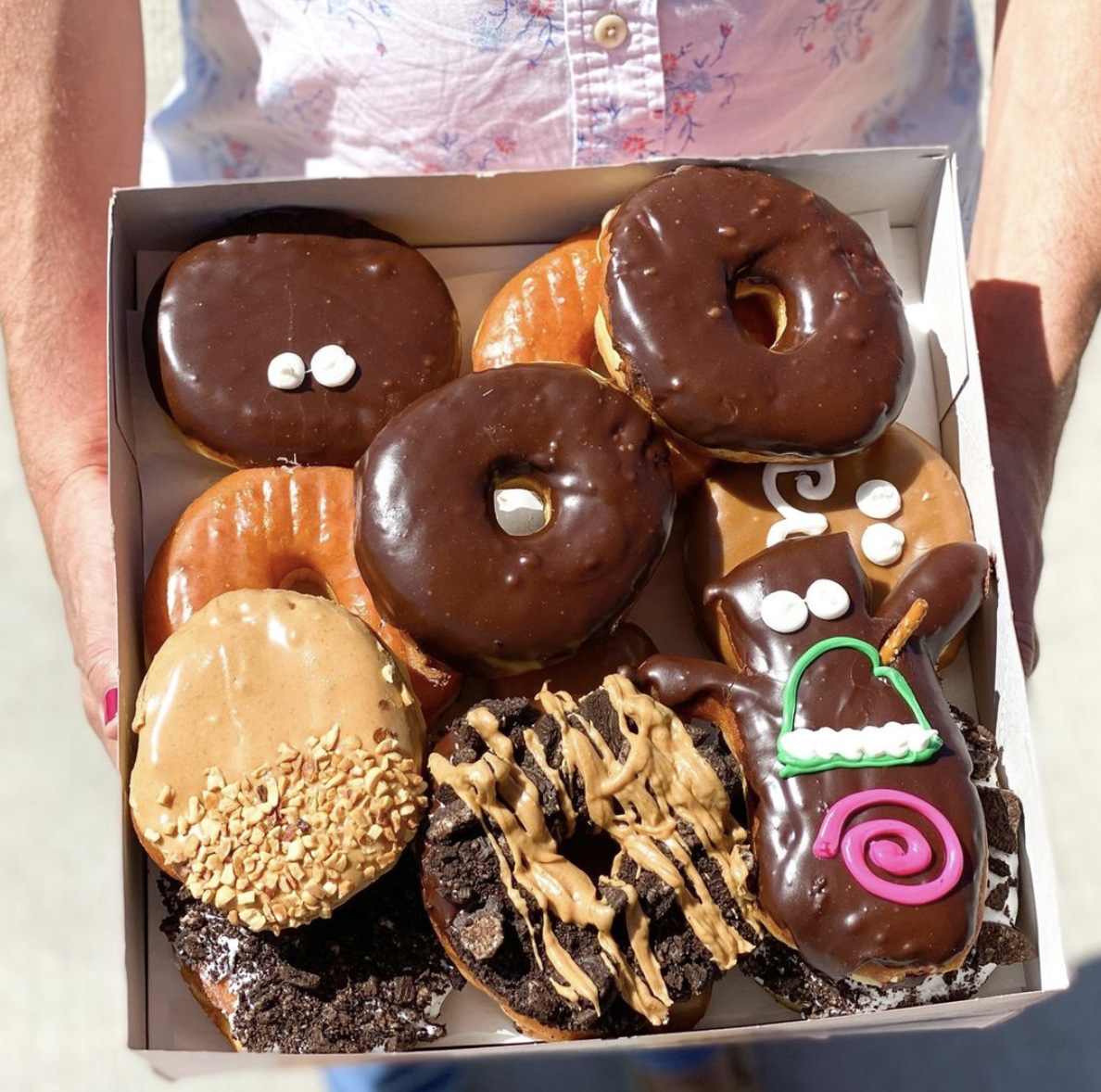 Several times a month, the Orlando Vegan Market sets up shop in the Veranda at Thornton Park to host night markets and brunches with live music. A regular vendor is Buku Vegan, which sells cookies, brownies, and their famous cake jars. They are probably best known for their Choco-Biscoff jars, which layer chocolate cake and decadent Biscoff cream in an adorable reusable jar. Not a fan of chocolate? No problem! They also rotate other flavors, such as their crowd favorite Carrot Cake jar. Follow on Instagram at @orlandoveganmarket for the upcoming market schedules. 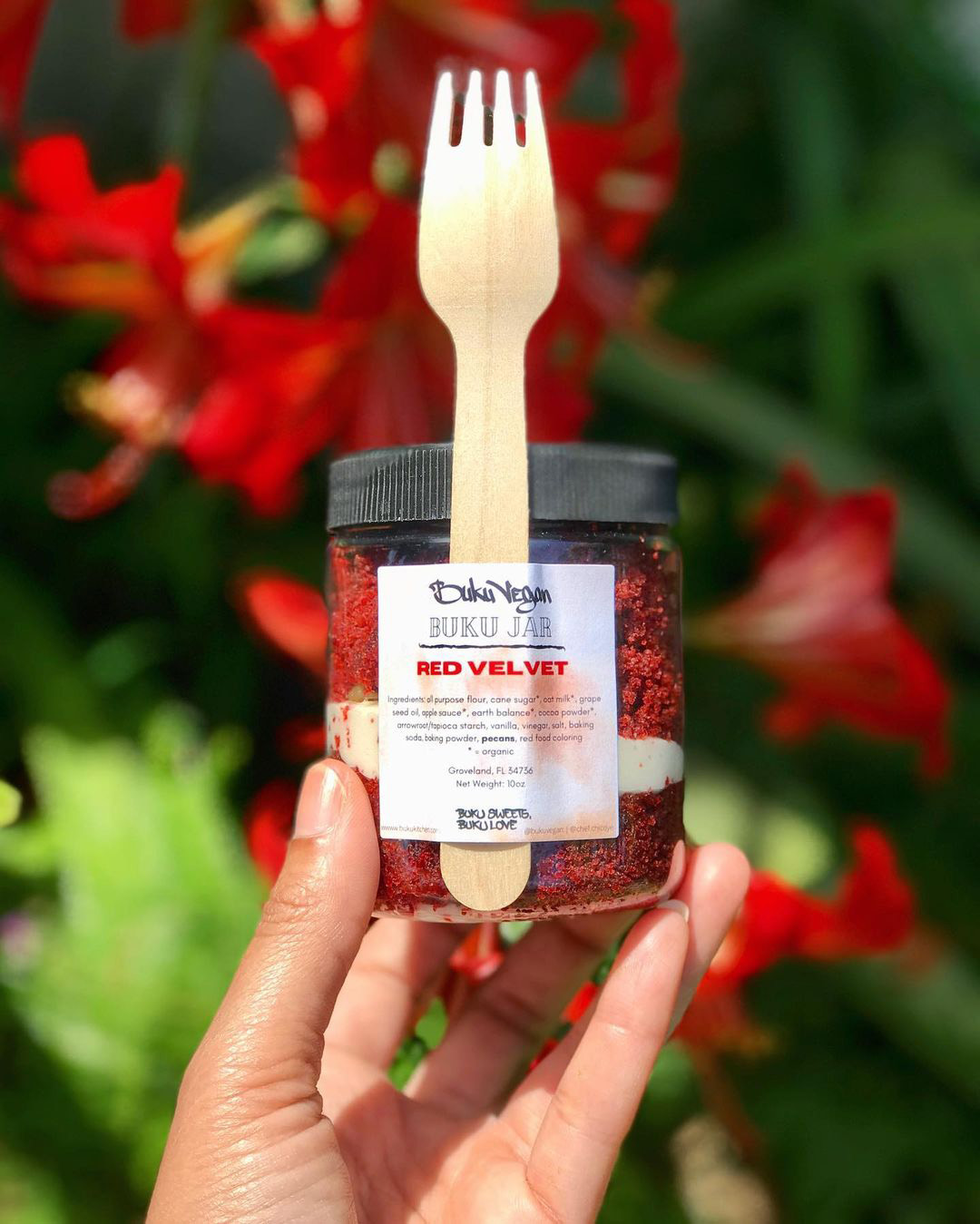 A little-known fact about The Melting Pot chain of restaurants is their full four-course vegan menu. That’s right—you can snack on vegan cheese fondue and salads, cook your veggies in your selection of broth, and even enjoy a dark chocolate fondue to end your night. Enjoy a selection of fruits ready for dipping into oozing, indulgent chocolate with friends or a loved one. Dessert at The Melting Pot may be your only chance to enjoy Chocolate Fondue in the city of Orlando, which is why this sultry dessert makes it on our Orlando dessert roundup!

Allison is a writer, consultant, and media specialist residing in Sanford, Florida. She is the founder of The Sanford Vegan (an Orlando-based vegan food blog) and Interfaith Now (an international faith-based media outlet). Allison is passionate about global cuisine and loves creating fresh, frugal, and healthy meals for her family. Learn more about her work at allisonvantilborgh.com.