Introducing Cocacao: You Haven’t Tasted Chocolate Like This Before

This award-winning chocolate can be found at select health food stores and online for nationwide delivery.

What began as a better-for-you chocolate startup fueled by love and loss has gone mainstream! Pronounced “co-kah-kow,” Cocacao chocolaty morsels can now be enjoyed across the nation. No matter where you live, we’ve got the details on how to snag this luxurious treat. And for those California locals, this vegan chocolate company recently launched at Erewhon Market in LA and Jimbo’s in San Diego!

Cocacao was founded by Michele and Jeffrey Davis. The early development of these tasty chocolate bites comes with a unique story of death, divorce, and chocolate. “After the loss of my husband’s wife and my divorce,” Michele shared with us, “he asked me on our first date, ‘Do you like chocolate and coconut?”’ Her response led her not only to a new marriage but to the founding of a plant-based treat company. What began with a sweet pickup line later became recipe testing in Jeff’s home kitchen, followed by product launches at Portland farmers markets and nearby grocers. Fast forward, these chocolaty products were awarded “Best Chocolate Candy” at the Oregon Chocolate Festival in 2020 and can now be found on grocery shelves across the nation.

Cocacao Is Made from Simple Ingredients

As the name indicates, Cocacao combines two of our favorite foods–coconut and cacao for a chocolaty coconut confection. In the form of bite-sized morsels, each serving begins with three to five simple ingredients, including cacao, coconut oil, and coconut nectar (the syrup from coconut tree blossoms). Cocacao products are not technically classified as chocolate as they don’t contain enough cocoa butter to fall into that category. Instead, the brand uses coconut oil which packs a seriously rich and luxurious mouthfeel. Cocacao is a decadent, melt-in-your-mouth chocolaty treat packed with organic cacao powder from the Dominican Republic and South America. Each morsel also includes a variety of nuts, fruits, spices, and herbs for a unique treat-yourself experience.

Cocacao varieties include Original, Cayenne + Cinnamon, Hazelnut + Sea Salt, Blueberry, Mint, and Pumpkin Spice. Each pack contains 12 tasty bites of deliciousness, packing 70-80 calories per three-morsel serving. All Cocacao varieties are vegan, gluten-free, paleo, soy-free, low-glycemic, certified organic, and made from simple ingredients. Enjoy Cocacao straight from the fridge or melted as a dip for pretzels, apple slices, and your favorite desserts. This simple treat will satisfy your sweet tooth even in small amounts. 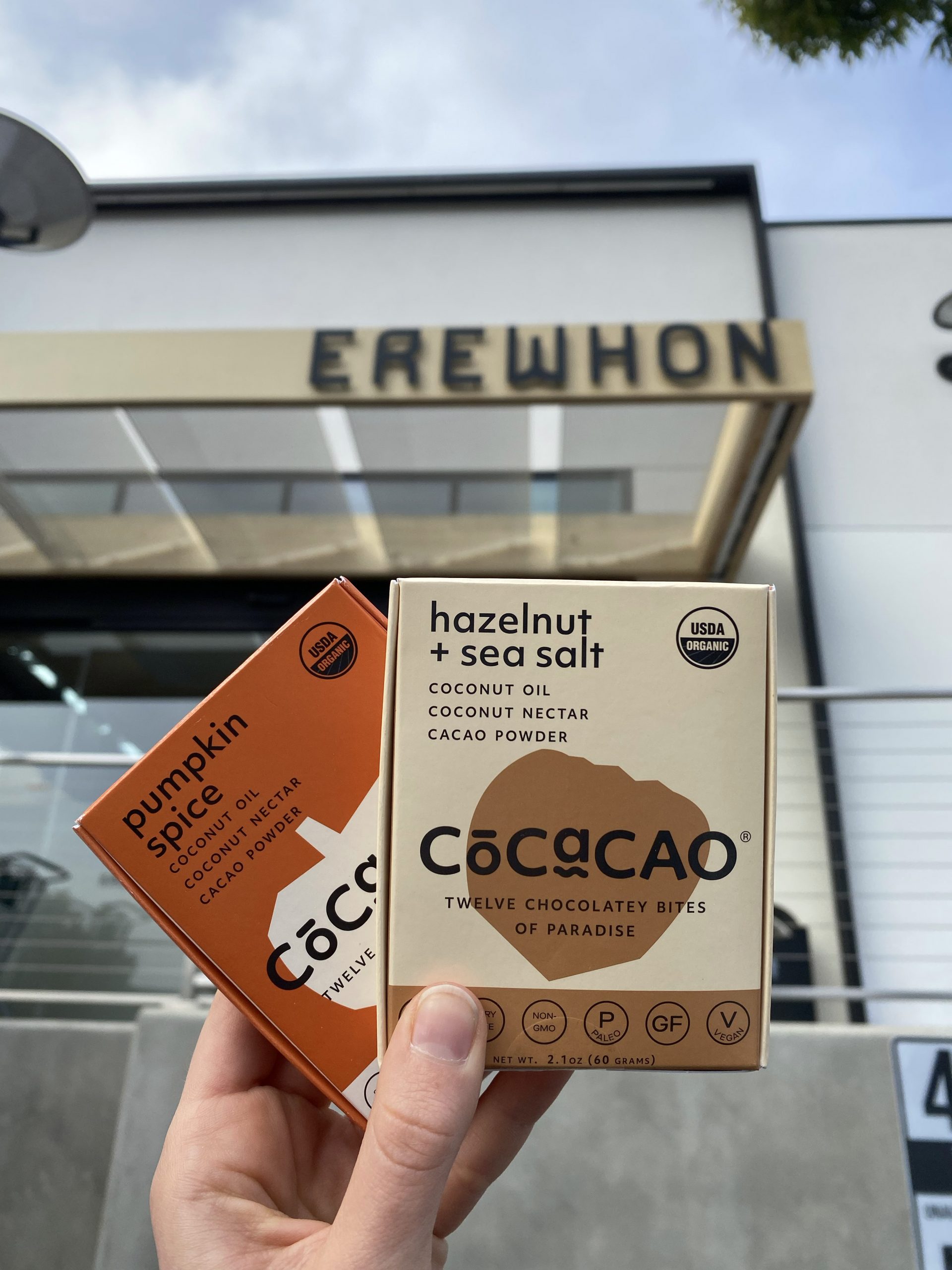 Cocacao Morsels Can Now Be Found at Erewhon Market in California

Cocacao morsels can now be found at Erewhon Market in California. This West Coast luxury supermarket chain offers Hazelnut, Blueberry, Mint, and Pumpkin Spice flavors at all of their locations. “Being part of Erewhon is an achievement for us,” Michele, Cocacao President & CEO, told VegOut. “Their stores only bring in quality ingredients and products for their customers. We are proud to provide a vegan chocolate with a milk chocolate mouthfeel.” Michele and Jeffrey are the ultimate treat-making team, and after more than a lifetime of love, hope, ambition, and perseverance, their 12 magical bites continue to make their way to even more happy consumers. 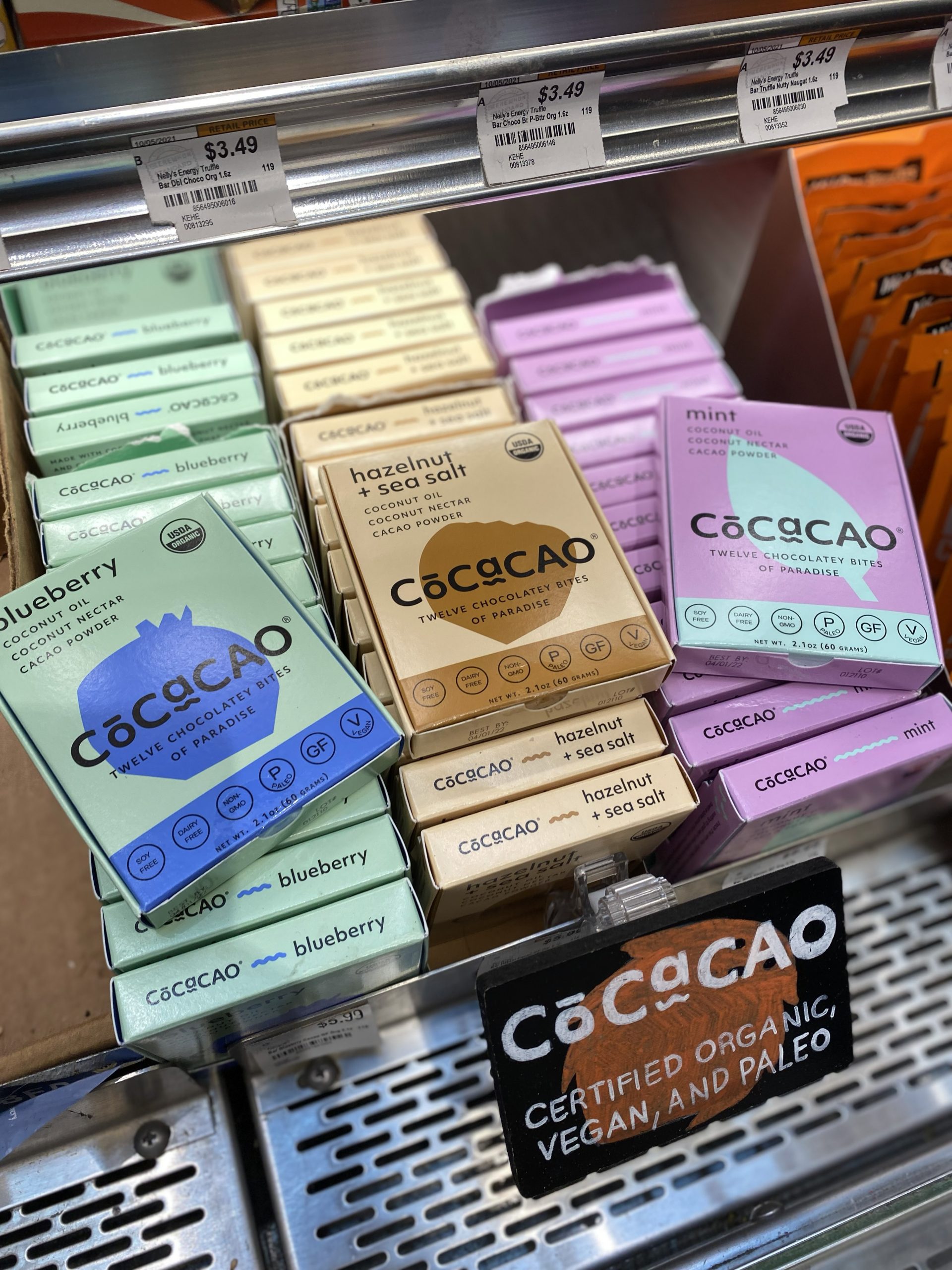 Cocacao’s decadent sweets can be found online at Cocacao.com and in a variety of stores, including Erewhon Market and Jimbo’s in California. Can’t find them near you? Place a request!