Vegan AF is a Black-owned vegan food truck that just debuted this month with the most mouthwatering lineup of plant-based street food. So the next time you spot the bright pink food truck around town, here’s why you should stop for a bite to eat.

It’s safe to say that some of the most drool-worthy dishes in town are from vegan food trucks in LA! From Word of Mouth’s mac ‘n’ cheese bites and Lettuce Feast’s glazed chicken tenders to The Plant Power Truck’s breakfast sandos and Happy Ice’s colorful water ice, us Angelenos are truly lucky to have so many plant-based options on wheels. But there is one menu item that’s lacking from the vegan food truck scene—loaded egg rolls.

You’re probably already familiar with the classic crispy Chinese appetizer—warm and flavorful on the inside with a satisfying crunchy layer on the outside. While Vegan AF stays true to that dynamic with their loaded vegan egg rolls, their street food-inspired renditions are filled with wild combinations of ingredients in the style of pizza, burgers, and Philly cheesesteaks. Yep, you read that right, Philly cheesesteak egg rolls! “What’s in it?” you ask. Masterfully seasoned plant-based meat, caramelized onions, mozzarella cheese, and peppers with a side of sweet chili sauce. Yum! 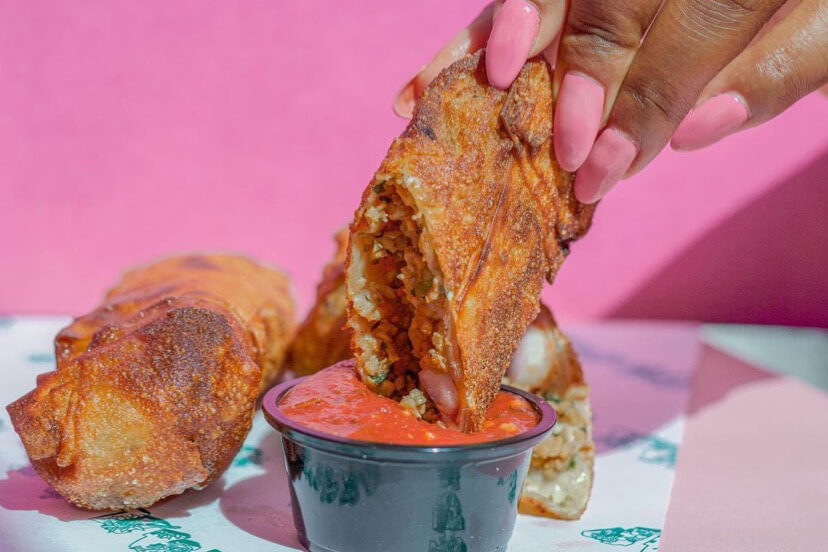 The other half of the Vegan AF menu features loaded vegan fries in the flavors of Nashville hot, Philly cheesesteak, and pizza. How freaking epic? We’re especially excited to try the Munchies Loaded Hotties Nashville Fries which come topped in fried buffalo mushroom and shrimp with a drizzle of vegan ranch. If you’re looking for a more classic side of fries, Vegan AF also serves Basic as F*#k Fries that are seasoned with their special seasoning blend.

The last item on the menu at this hot and new food truck is vegan banana pudding. The southern-inspired dessert is traditionally made with sweet vanilla custard, vanilla wafer cookies, and slices of bananas topped with whipped cream. Vegan AF’s banana pudding features all the same flavors and textures as the original version but this time, it’s 100% plant-based!

Where to Find the Vegan AF Food Truck

Vegan AF founder, Chanel Goodson, first started driving around her new truck two weeks ago. Since then, she’s been scouting out the best places to park and serve plant-based peeps around LA such as Melrose, Koreatown, and Hollywood. To stay updated on Vegan AF’s schedule and menu, follow @veganafoodtruck on Instagram.