The Best Vegan Bagels in LA: Ranked by East Coasters

We sat down with three New Jerseyans to review bagels from eight Los Angeles bakeries.

Let’s face it, bagels are a pretty hot topic in the foodie scene. Whether you’re originally from the East Coast or you just appreciate a good bagel, it can be hard to find one in Los Angeles that checks off all the boxes. To help make your search easier, we present you with this list of the best vegan bagels in LA: ranked by East Coasters. That’s right, we consulted friends from the bagel hubs of New York and New Jersey to rate these baked goods.

Disclaimer: All of the bagels from these spots are dank—otherwise, we wouldn’t have included them. To compare apples to apples, this ranking is based on each establishment’s plain bagel without any spreads or toppings. In each section, we’ll mention other flavors and sandwiches that they offer.

The plain bagel from Pop’s took the trophy for the best, most New Jersey-like roll. Our taste-testers raved about the bagel’s thick texture and golden-brown color, complete with satisfying texture bubbles on the outside—which we’re just now learning is a very important element to a good bagel. All of Pop’s bagel options (plain, everything, cinnamon raisin, and gluten-free) are vegan and come with several plant-based toppings to dress them up, including a house-made cashew cream cheese and Spero sunflower cream cheese. 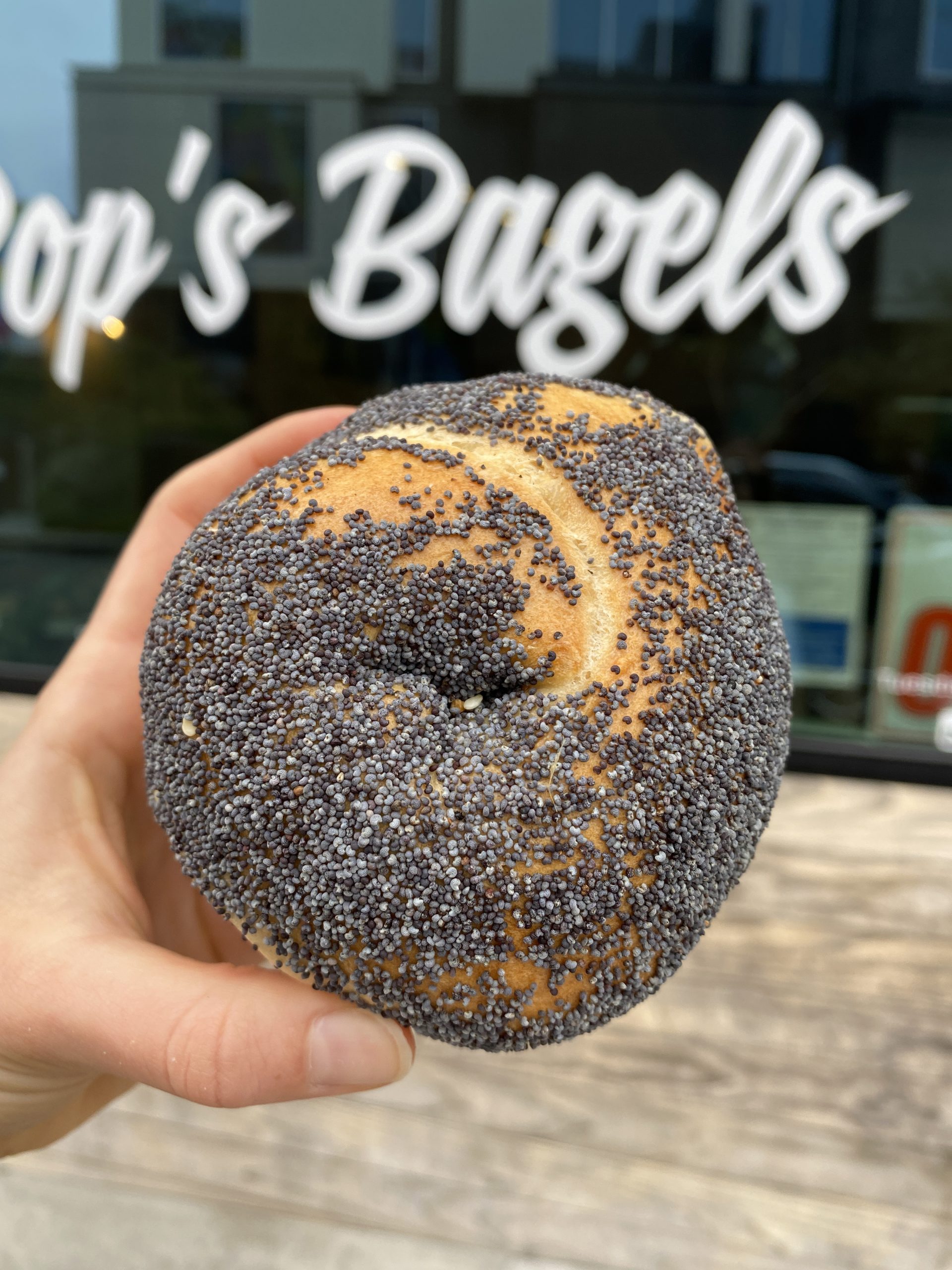 This spot was founded by an East Coaster who moved to LA and realized there weren’t any bagels on the West Coast that reminded him of home—which makes total sense because our taste-testers were blown away by the nostalgic taste of Maury’s bagels. All of the flavors at this bagel hot spot are vegan unless there is a non-vegan word in the name. From plain, everything, and sesame, to za’atar, onion, and garlic, each bagel you try from Maury’s will offer the perfect balance of dense, airy, soft, and chewy. If you uplevel your roll with a dollop of classic or herb Blöde Kuh cashew cream cheese, get ready for your taste buds to be transported straight to the Jersey shore! 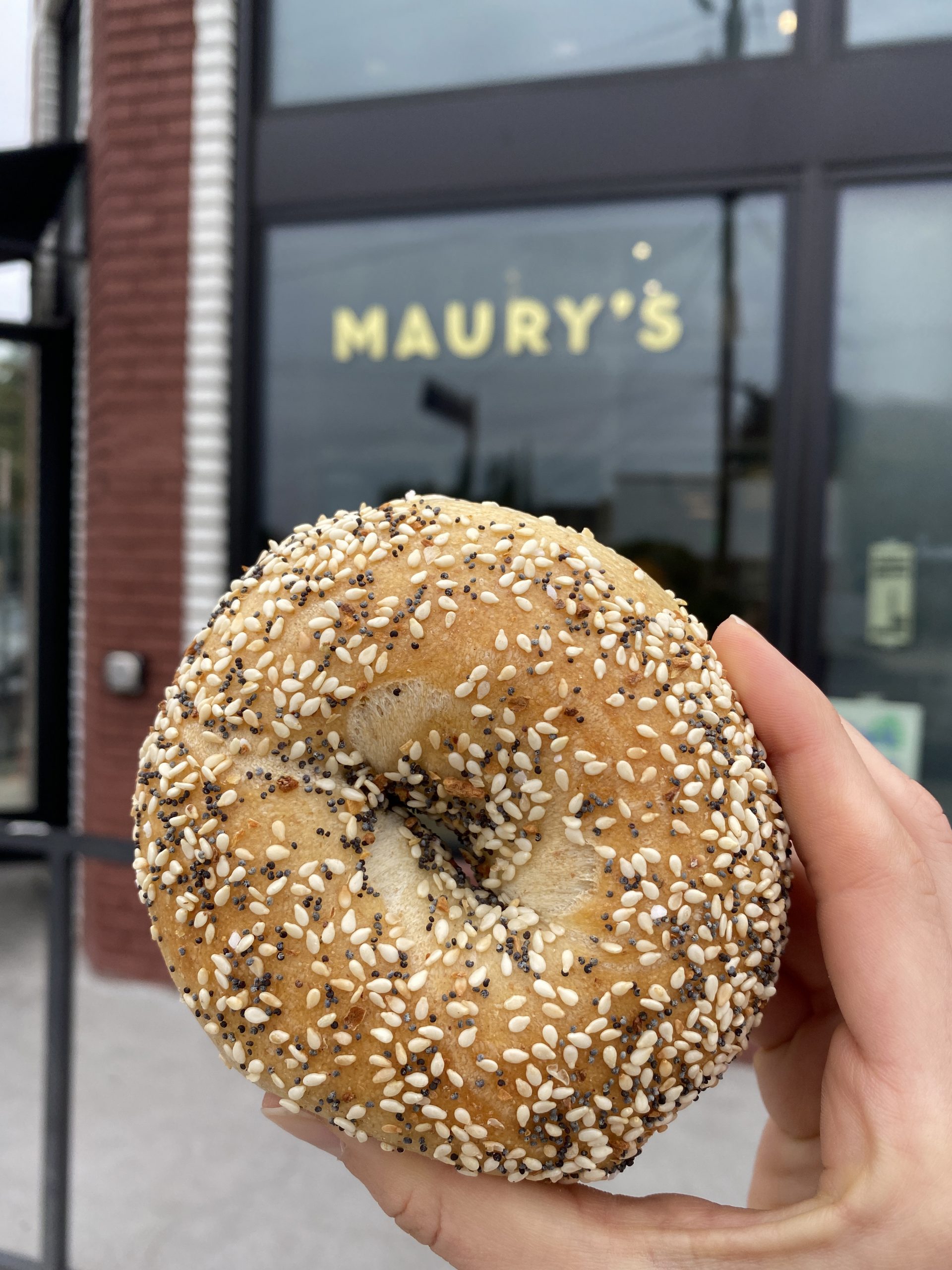 3. Just What I Kneaded

When you walk into this charming vegan bakery, you’ll be greeted with three perfectly baked bagel flavors—plain, everything, and cheddar. To pair with your roll of choice, you can order a generous slather of herb, plain, or pickled jalapeño schmear on top! Alternatively, try these buns in a sando. The Elaine is a cheddar bagel with pickled jalapeño schmear, house-made seitan bacon, sprouts, and tomato. The Joe Cool features an everything bagel with Impossible breakfast sausage, tofu egg scramble, smoked Gouda, and mayo. The Foxy Loxy layers rainbow carrot lox, herb schmear, red onions, capers, and fresh dill on an everything bagel. This last one isn’t on the official menu but if you ask an employee for The Business Goose, they’ll hook you up with a peanut butter and jelly bagel sandwich! This bagel food truck deserves all the clout it gets—and more. Not only is the taste and texture of each bagel on point, but the variety of plant-based options is abundant and delicious! The vegan bagel flavors include plain, everything, sesame, poppy, and blueberry, with the spread options being vegan cream cheese, scallion vegan cream cheese, and vegan roasted bell pepper spread. Our comparison was focused on the solo bagels, but Yeastie Boys is most popular for their bagel sandwiches! Vegan renditions to try include the Mishka and the PB&J. 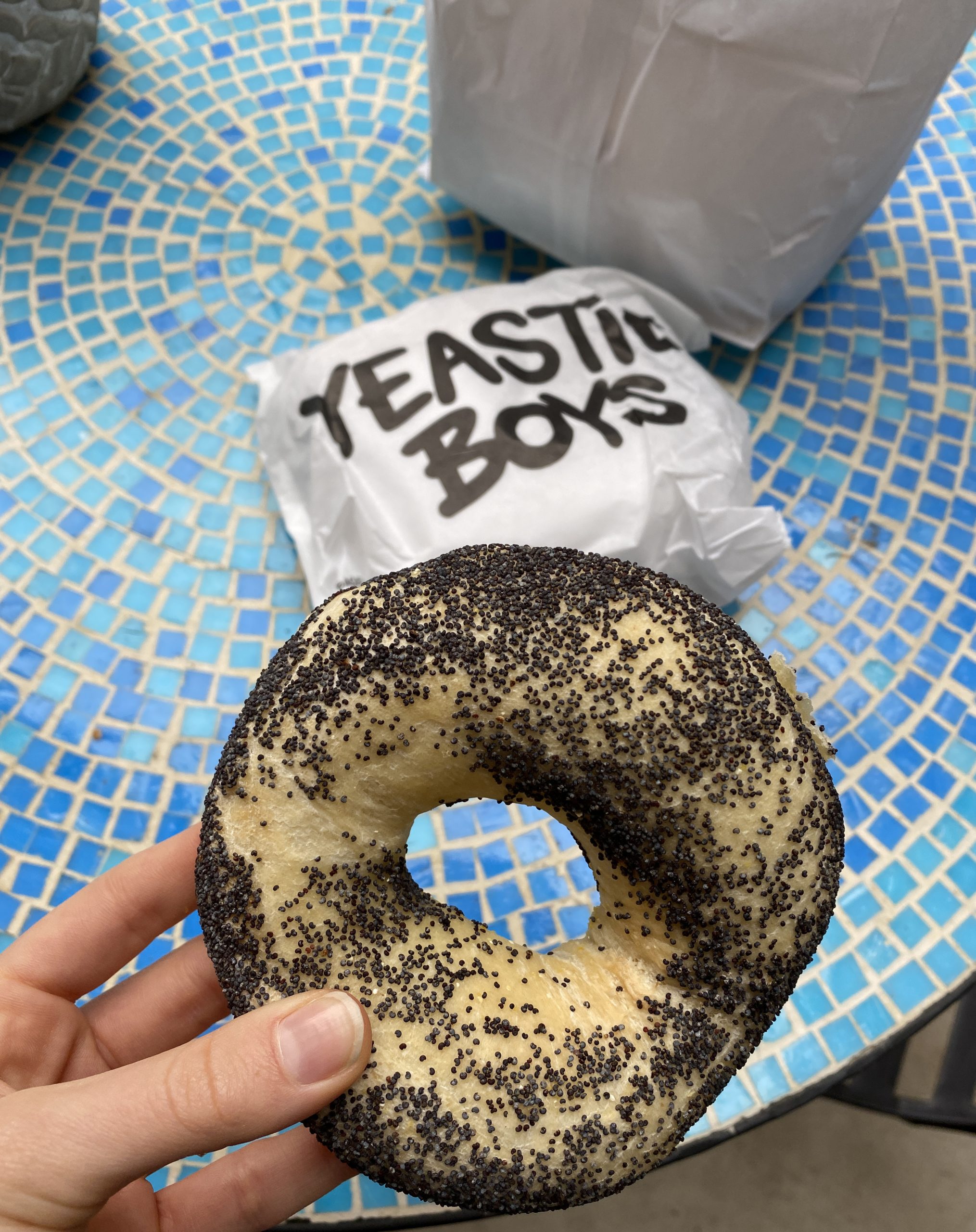 If you haven’t been to Hank’s Bagels, you’re missing out! This spot will make all your East Coast dreams come true with their endless combinations of spreads, toppings, and the absolute best vegan bagel sandwich we’ve ever tried. Hank’s bagel flavors are vegan unless otherwise noted. You can order yours with a layer of jam, almond butter, or Follow Your Heart vegan cream cheese with whatever veggies you’re craving. But the #4 bagel sandwich is the star of the show. This handheld features avocado, tomatoes, pickled onions, radishes, salted cucumber, sprouts, dressing, and a house-made vegan aioli that will rock your socks off. 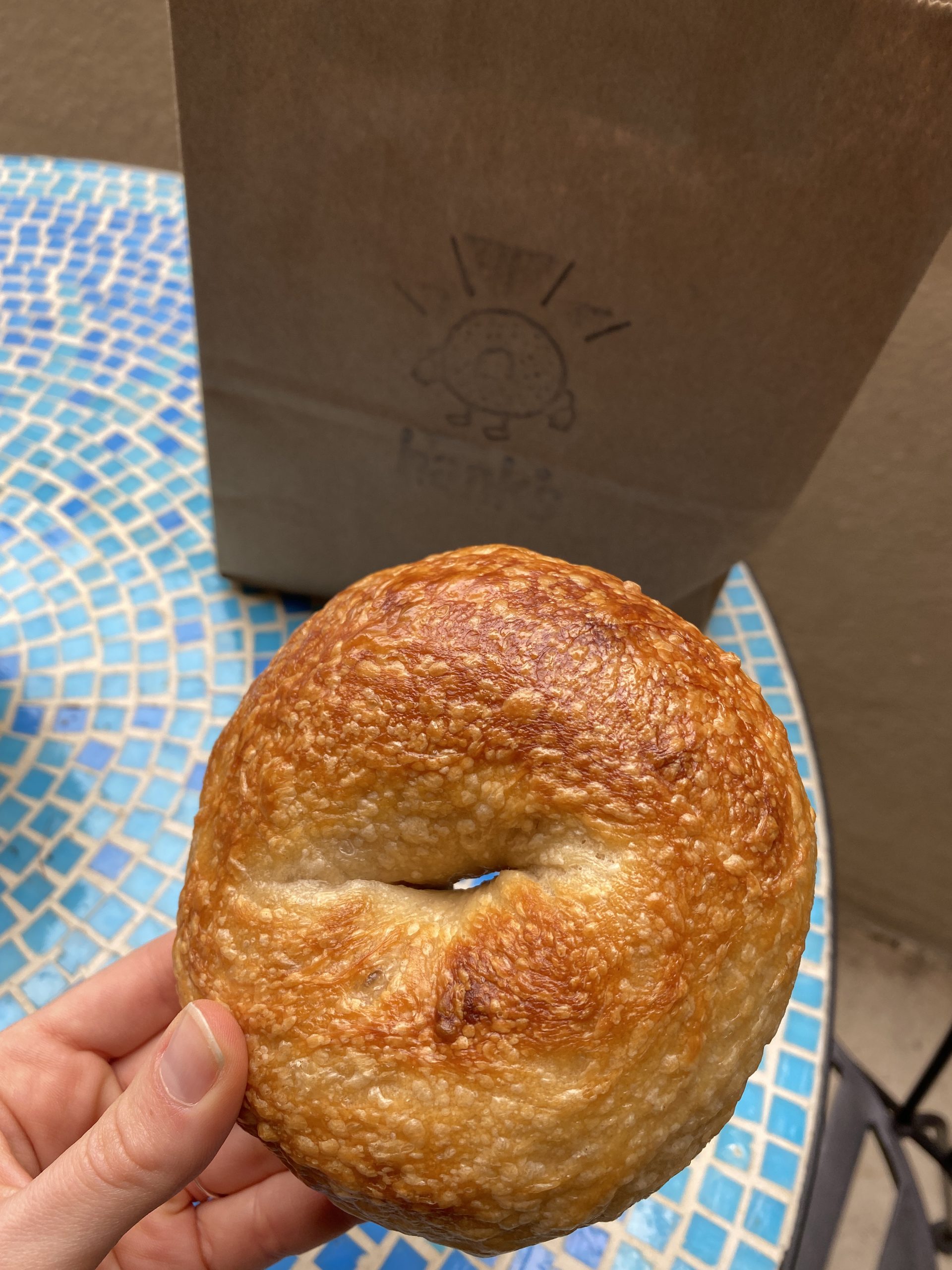 This Jewish deli and bakery brings some serious heat to the bagel scene in SoCal! They offer plain and everything bagels in a classic Bagel & Schmear format with Blöde Kuh cashew sriracha cheddar cream cheese. If you’re wanting to go the bagel sandwich route, try the “Bac-os, Egg, & Cheese Bagel,” “Megan Thee Scallion,” or “L.B.C.” with house-made carrot lox. To ensure the best quality and taste, the Mort & Betty’s team bakes their bagels fresh each morning and uses nutritious, organic ingredients (sourced locally when possible). At the moment, you can find this female-owned pop-up at Smorgasburg every Sunday from 10am-4pm. 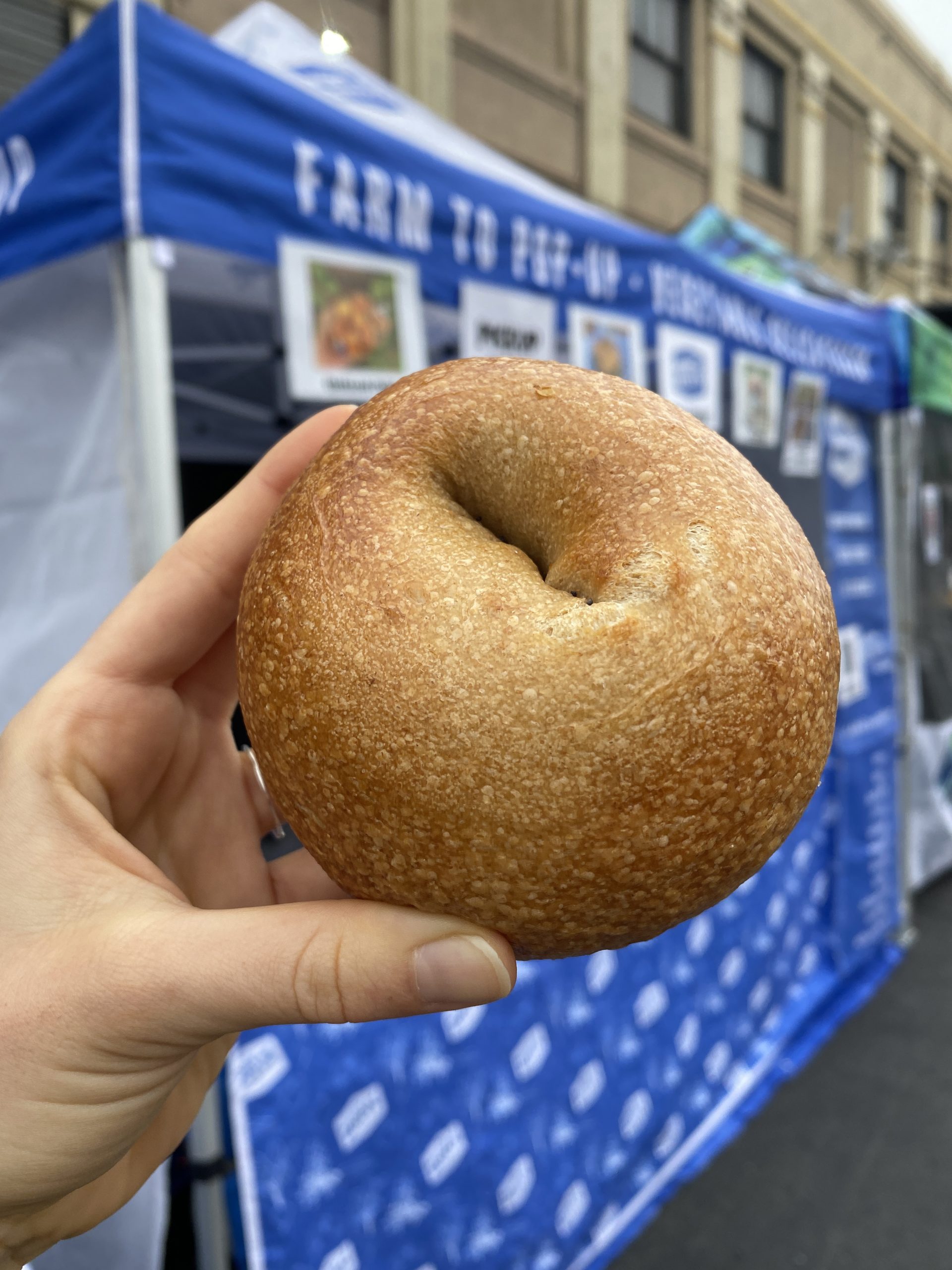 Western Bagel is a Los Angeles staple for a very valid reason! It was founded in 1947 by a bagel baker from New York who discovered there was a lack of good bagels in California. So, he packed up his things and opened Western Bagel. The establishment’s namesake product quickly earned the title, “The Bagel That Won The West.” So, what’s the deal with these holey rolls? They’re soft, chewy, and oh-so-satisfying. All of the flavors are vegan aside from the whole wheat, egg, and cheese varieties. 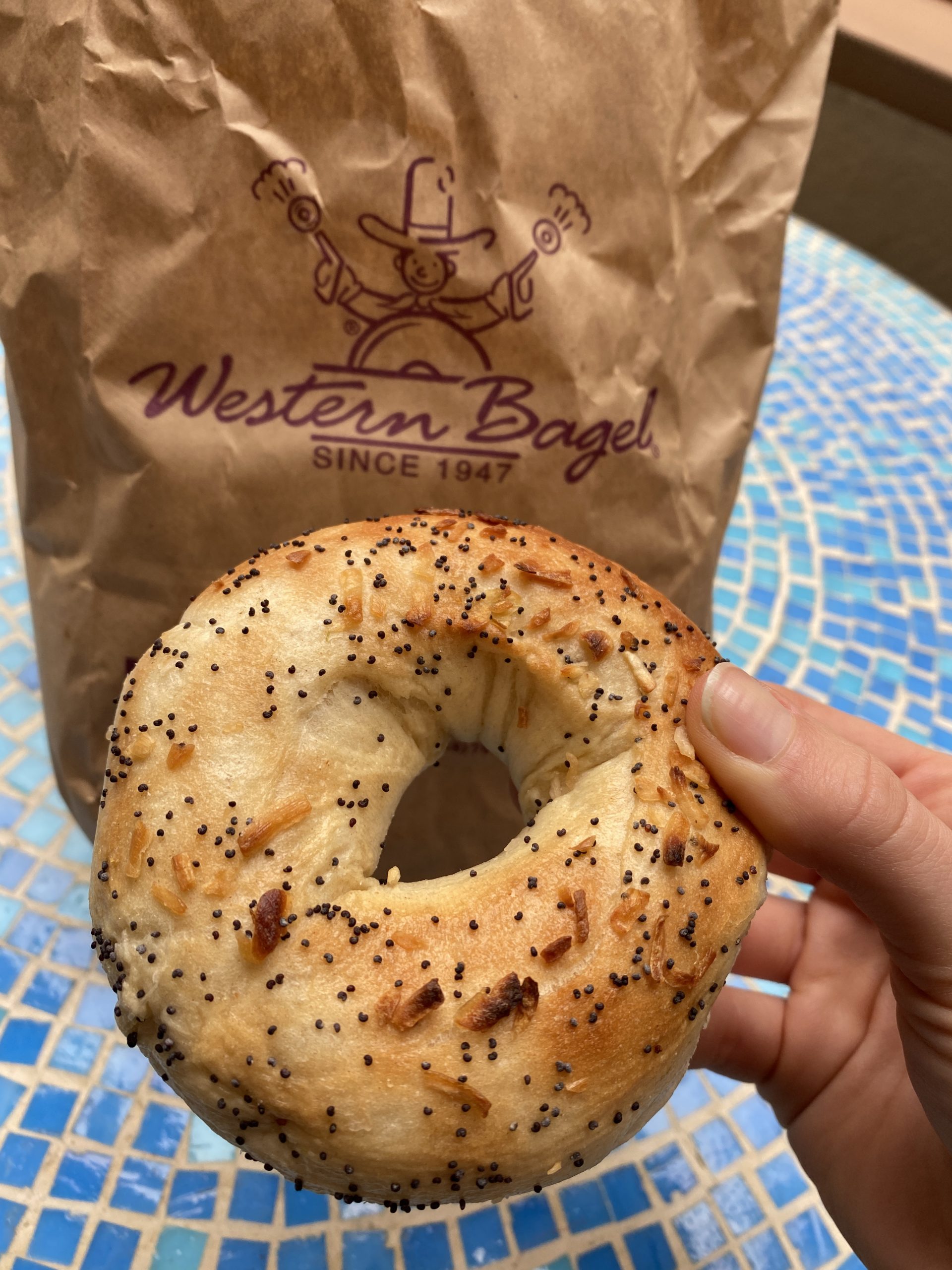 And now, one of the most talked-about bagel joints west of the Mississippi—Belle’s Bagels. Aside from the plain bagels we tried, this cute and quirky spot offers five other vegan varieties: salt, poppy, sesame, onion, and everything. If you want to take your roll to the next level, we’d suggest getting a schmear of Blöde Kuh cream cheese or going the North of York sandwich route. The vegan sando is loaded with smashed avocado, cucumbers, radishes, sprouts, pickled onions, and Sbez hot sauce. Honestly, you can’t go wrong with whatever you order from Belle’s! 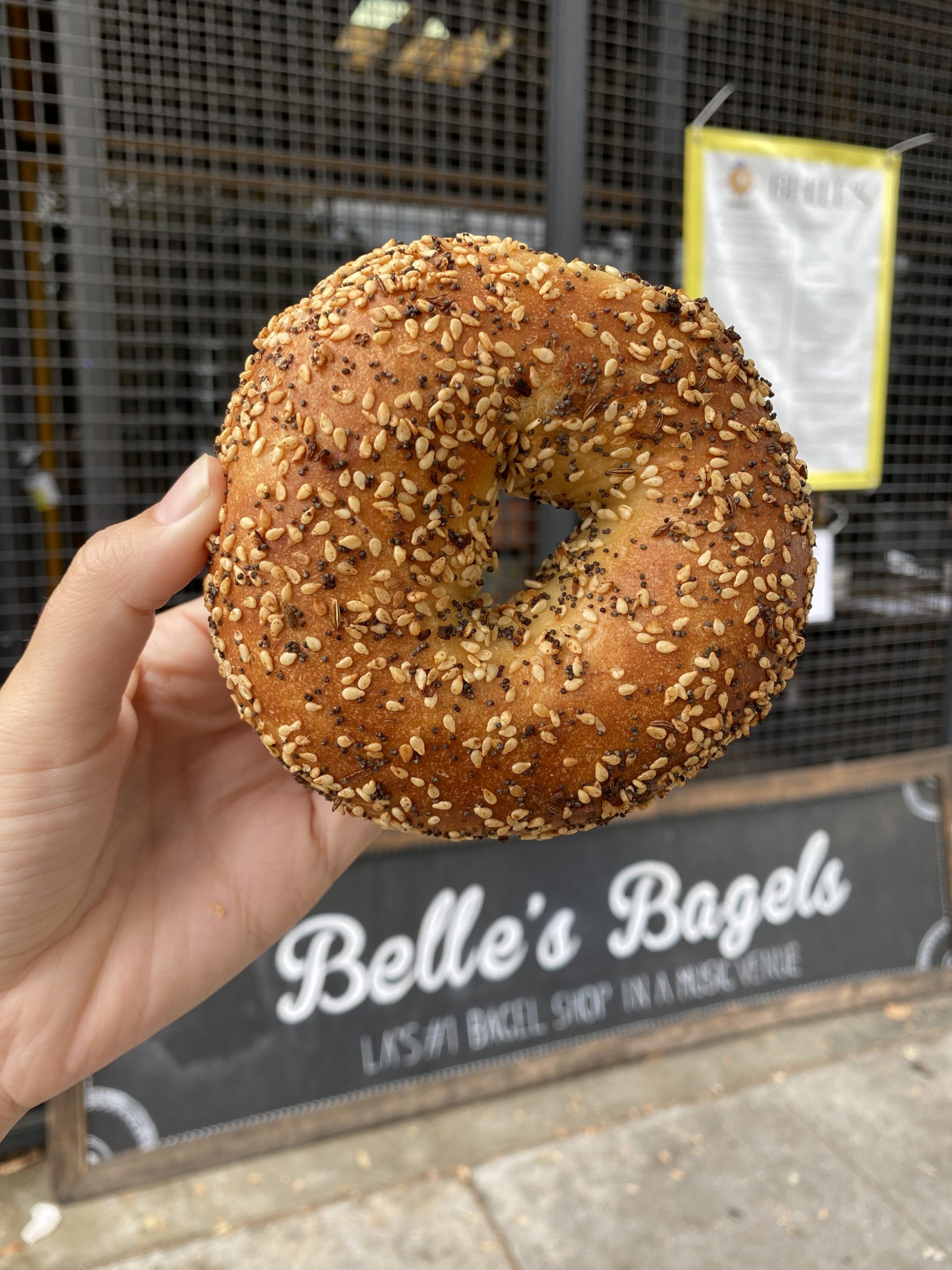 Stand-Up Burgers to Open in Culver City This Week

We’ve got the details on Culver City’s newest vegan burger joint, including an interview with the CEO of Veggie Grill Inc., Jay Gentile.