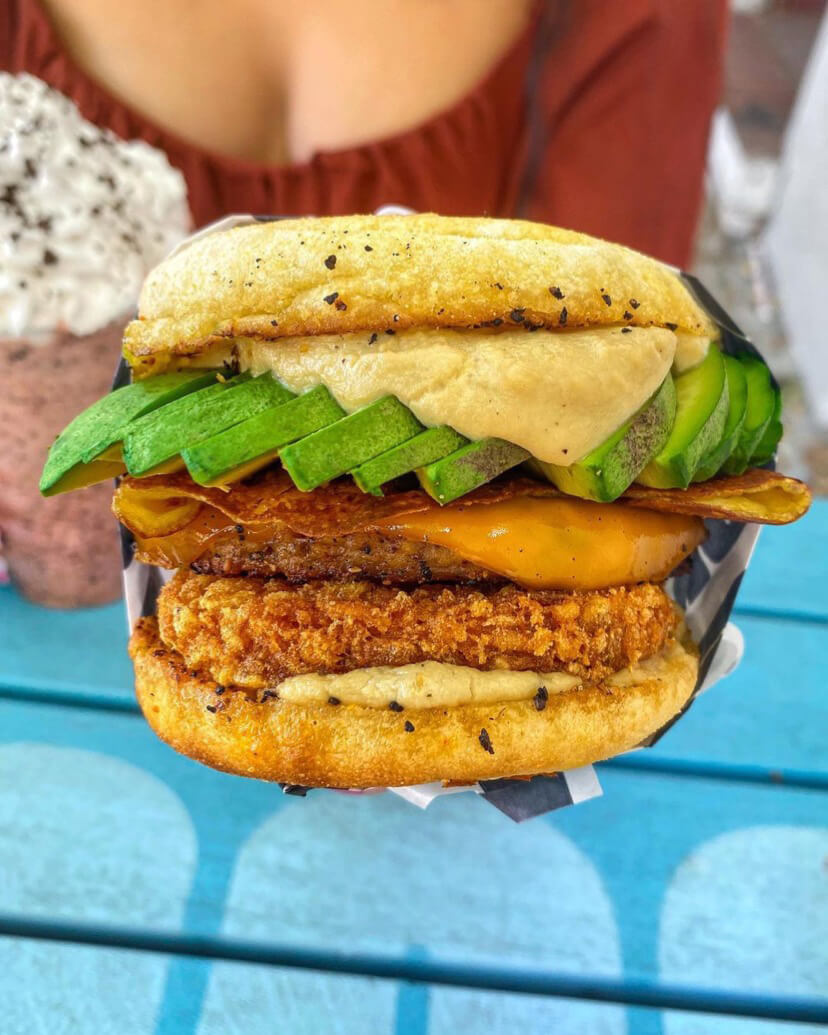 If you want to bite into a nostalgic, comforting vegan breakfast sando, pay a visit to this all-vegan coffee shop! From bacon and sausage to eggs, cheese, and veggies, there are plenty of glorious plant-based fillings that can be placed between a housemade biscuit or flaky croissant. Order one of their sip-worthy lattes to complete your meal! 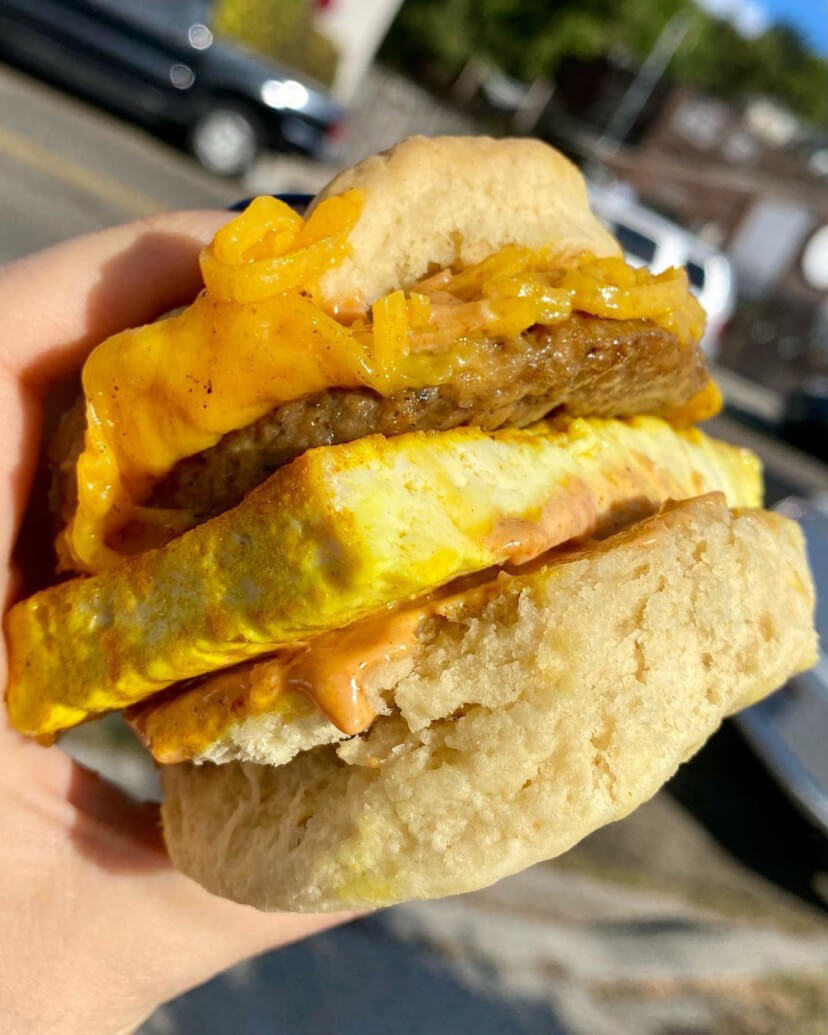 Burgers aren’t the only craveable handhelds this vegan joint serves up. They also offer a mean breakfast sandwich with folded JUST Egg, slice of American cheese, and their iconic Peruvian green sauce on a soft and fluffy English muffin. For a little extra protein and flavor, you can add an Impossible breakfast sausage patty or make it a meal to add hash browns and a drink! VOWburger is open as early as 8am. 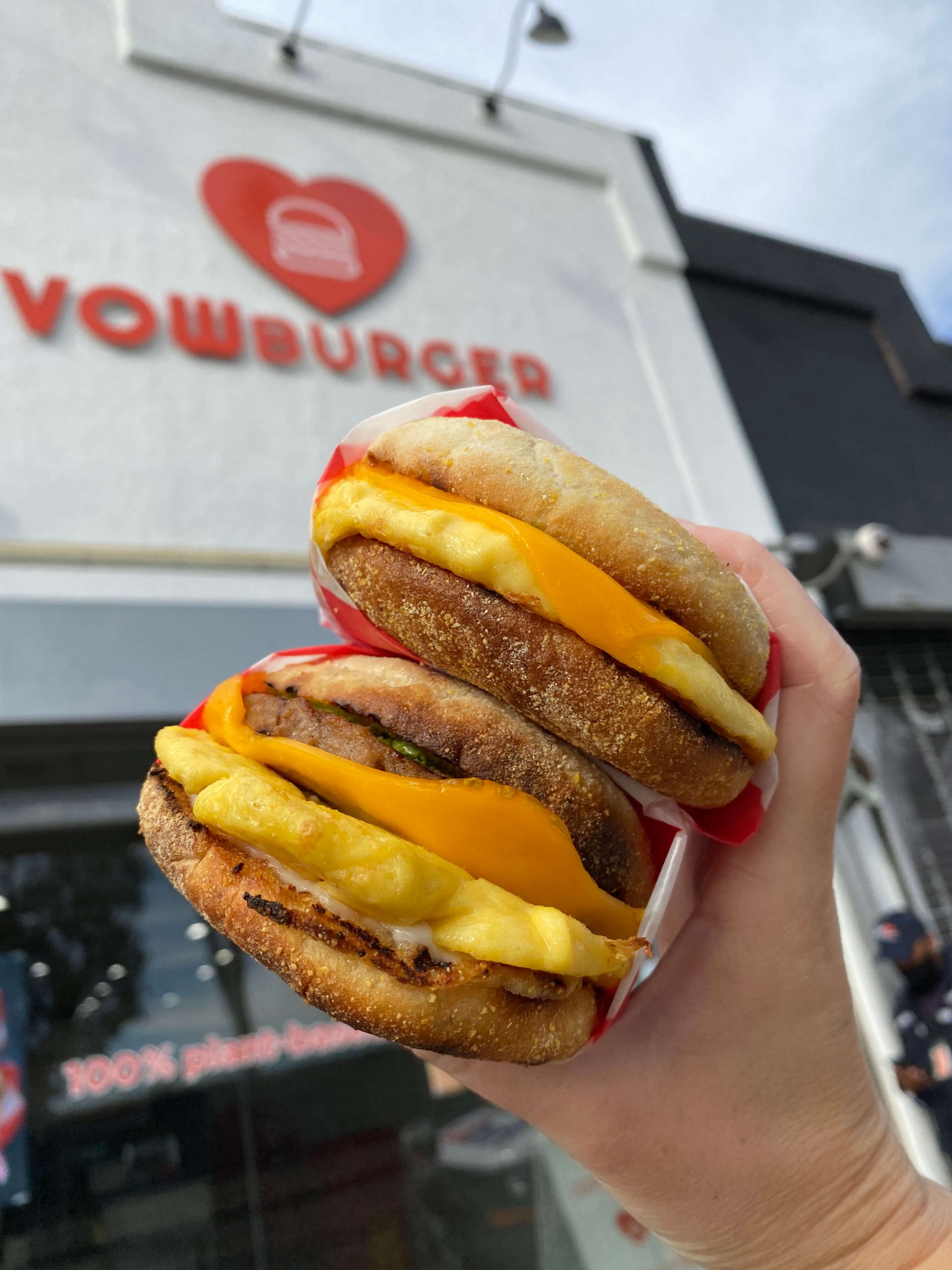 This plant-based restaurant never fails to impress us with their mouthwatering bites—from breakfast to dessert! Their classic breakfast sandwich is the restaurant’s upscale, all-vegan take on a nostalgic McDonald’s sando. It comes with a folded JUST Egg, sausage patty, shallot potato cake, slice of melted American cheese, habanada aioli, and a side of breakfast potatoes. Their new limited-edition waffle breakfast sandwich, The Waffler, features a folded JUST Egg, tempeh bacon, slice of American cheese, and jalapeño aioli. It’s served with the most drool-worthy brown butter maple sauce and a side of potatoes. You can’t go wrong with either (or both)! 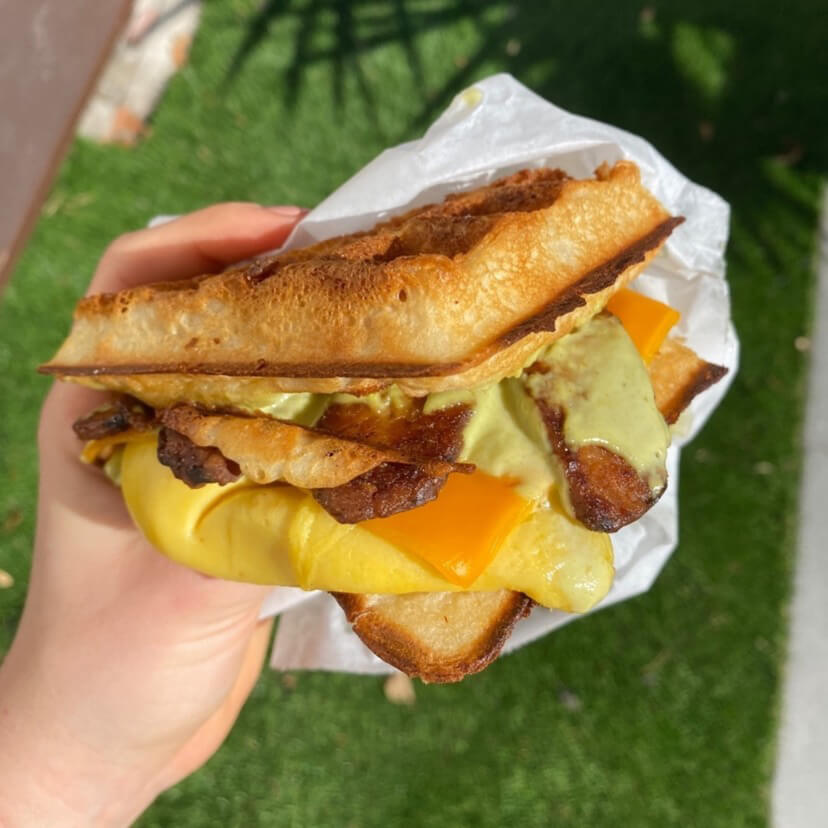 This charming cafe is vegan, gluten-free, and they serve breakfast all day? Wow, dreams really do come true! Powerplant’s breakfast sandwich contains layers of house-made tempeh sausage, vegan scrambled eggs, tomatoes, avocado, and a drizzle of Russian dressing on a gluten-free brioche bun. It’s served with a side of your choice and pairs well with a cup of joe, matcha latte, or your favorite morning beverage. 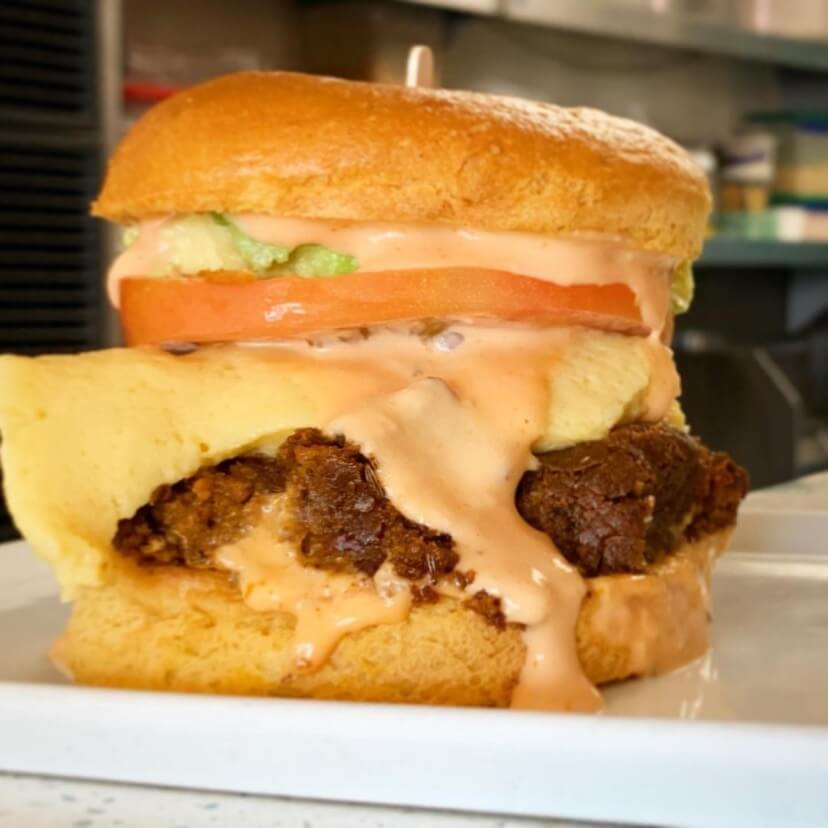 Did you know this vegan fried chicken joint serves brunch on the weekends? Now you do! If you stop by on a Saturday or Sunday between 11am and 2pm, you can order Wolfie’s breakfast sandwich which features a house-made sausage patty, a slice of cheese, and a folded egg on a beautifully toasted English muffin. Their other brunch items include an oh-so-tasty cone of chicken & waffles, a plate of comforting biscuits and gravy, and a beautifully wrapped breakfast burrito. 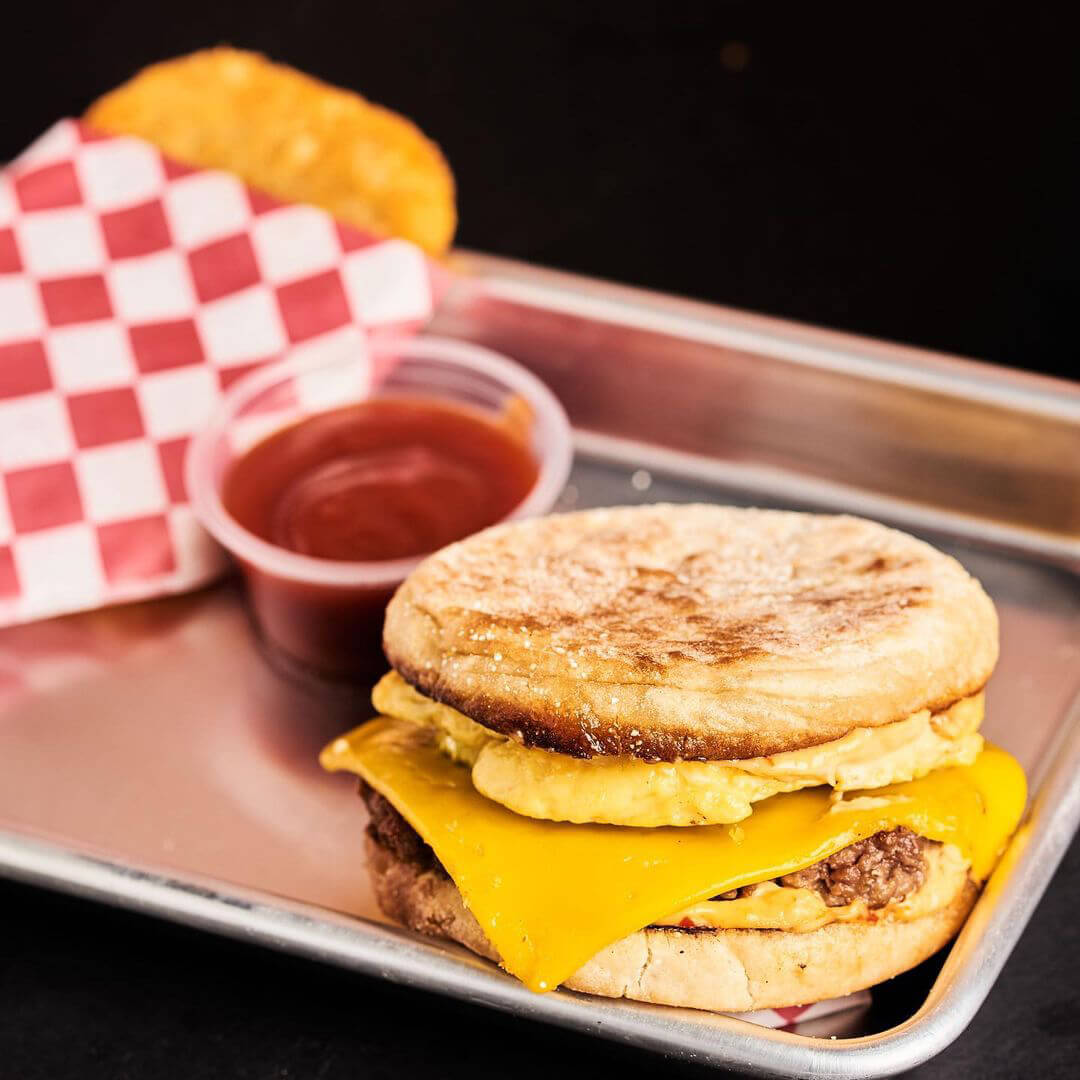 This plant-based fast food joint was one of the first spots to make a vegan breakfast sandwich that rivals the real thing—and they don’t just offer a classic version, they have a plethora of flavor combinations from which to choose! Whether you’re in the mood for an English muffin filled with eggs, cheese, and sausage, a bagel layered with a fried egg and bacon, or two waffle pieces loaded with fried chicken, there’s bound to be a handheld that fills your brekkie craving. 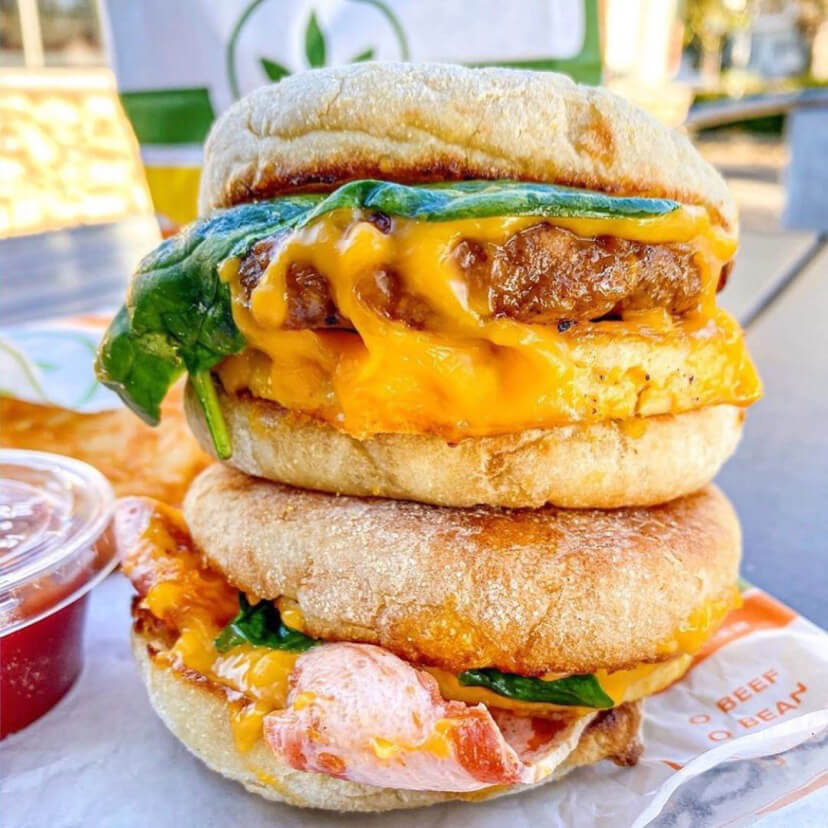 Peet’s Coffee just dropped an all-vegan breakfast sandwich and we couldn’t be more excited! Why? They’re the first big coffee chain to offer a high-quality sando that’s 100% vegan without any modifications. The Everything Plant-Based Sandwich features a Beyond Meat sausage patty, folded JUST Egg, and a slice of melted vegan cheddar. Want to know the best part? It’s served on an everything bagel. Oh yeah, baby! 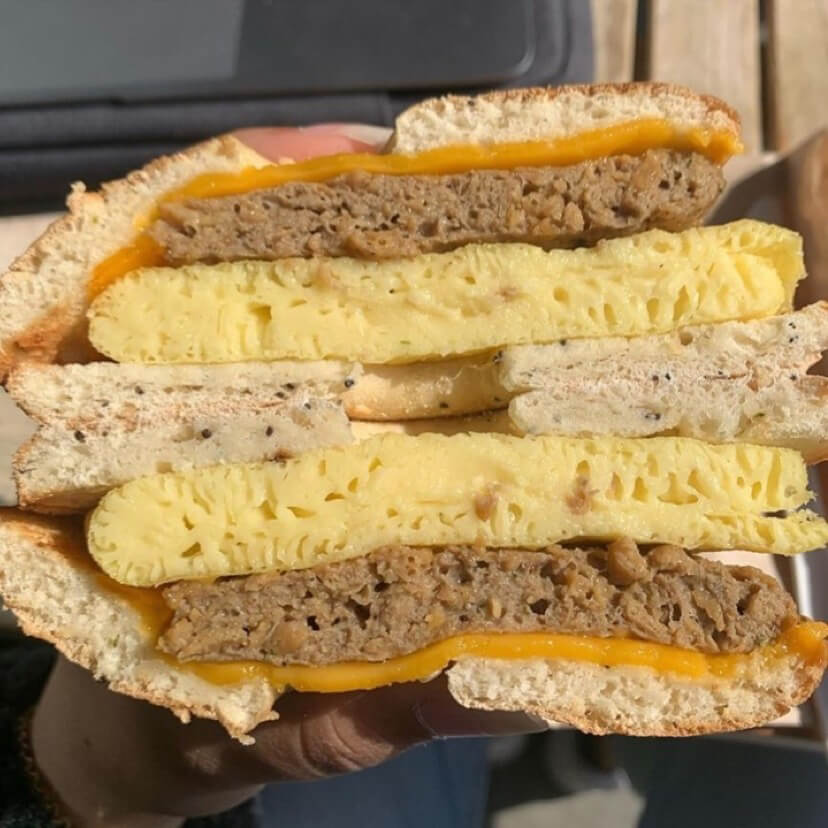 From breakfast, lunch, and dinner to dessert and midnight snack, Munchies is your one-stop shop for vegan comfort food! In the realm of breakfast sandwiches, there are two main options—the VcMuffin and the Epic Breakfast Sub. Both are loaded with satisfying savory ingredients and can be customized to the nth degree. There are plenty of gluten-free options as well. 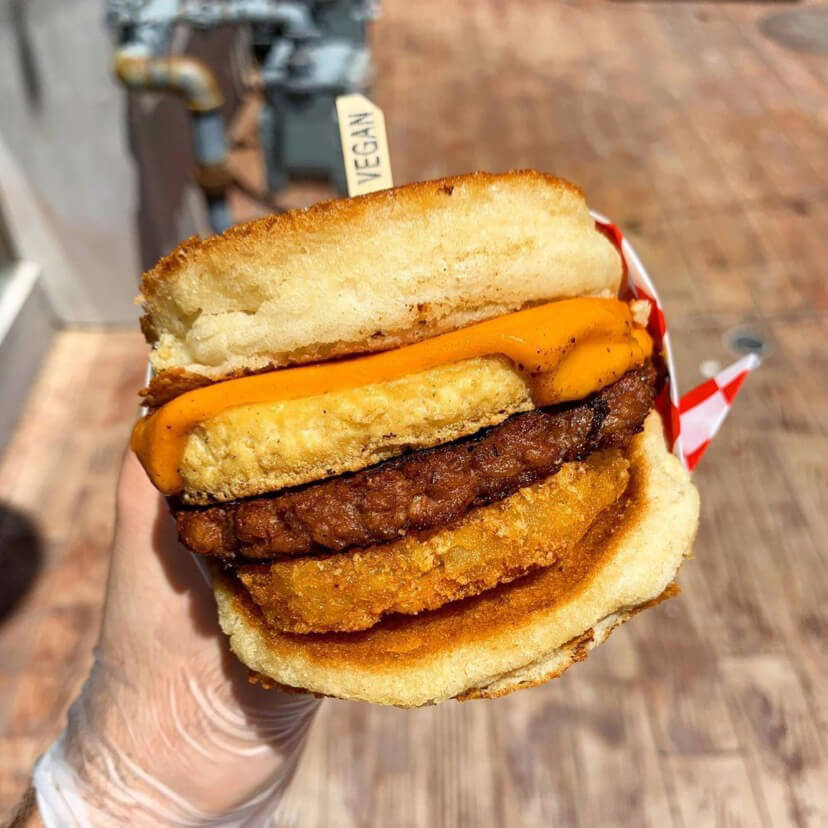 Crossroads Kitchen won this year’s VegOut Award for best vegan restaurant and best upscale vegan restaurant, so you know they’re the real deal. One of our go-to orders for weekend brunch is their Impossible Breakfast Sausage Sandwich with fingerling potatoes and fresh fruit. It hits the spot … Every. Single. Time. 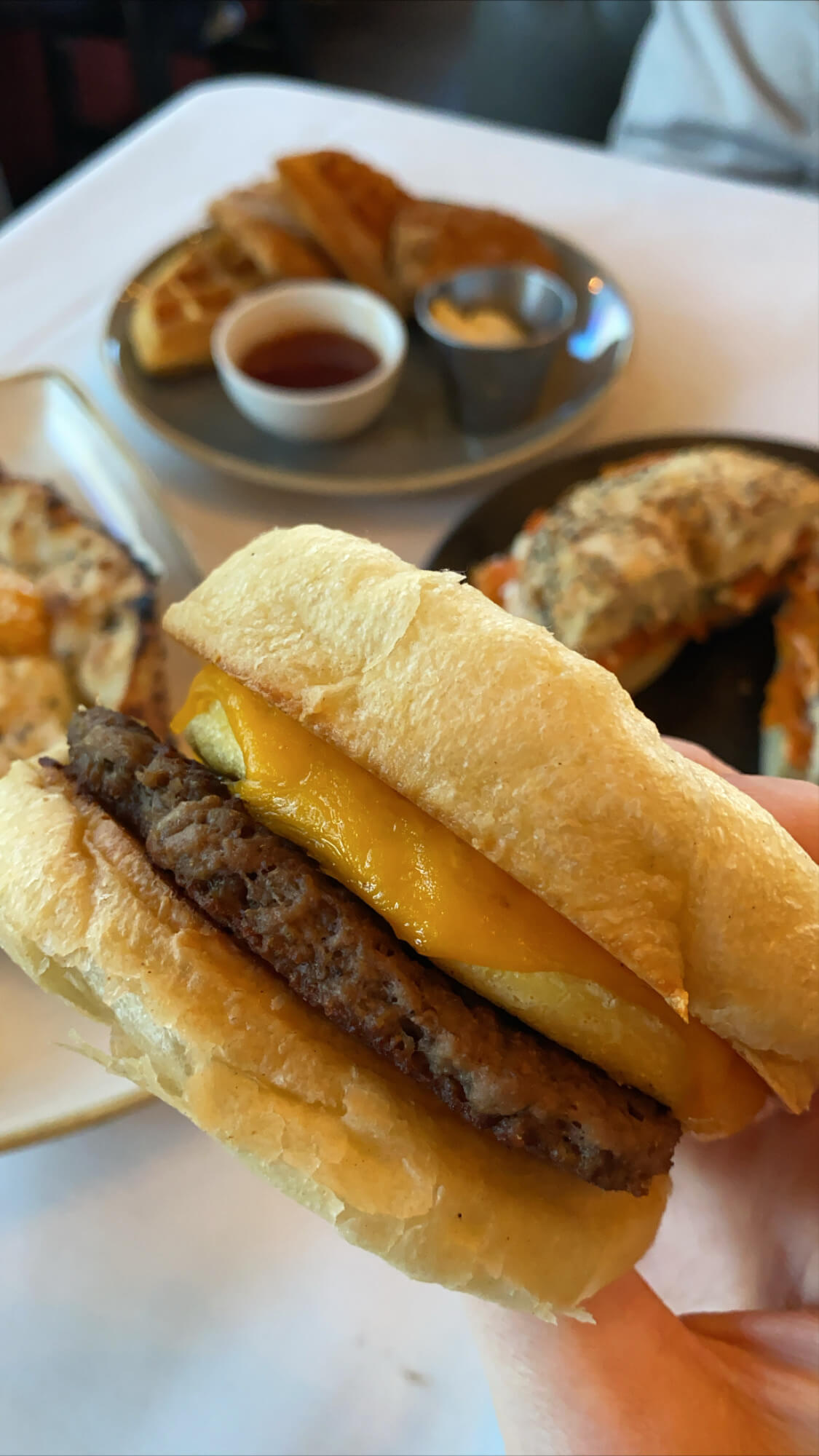 The Brekky Bee at this all-vegan burger joint is one to write home about! It’s made with JUST Egg, Violife cheddar cheese, crispy hash browns, and your choice of an Impossible or Beyond Meat patty drizzled with their house-made roasted pepper sauce. Do we have any East Coast-ers in the house? You’ll absolutely love the Bagel Egg ‘n’ Cheese sandwich! 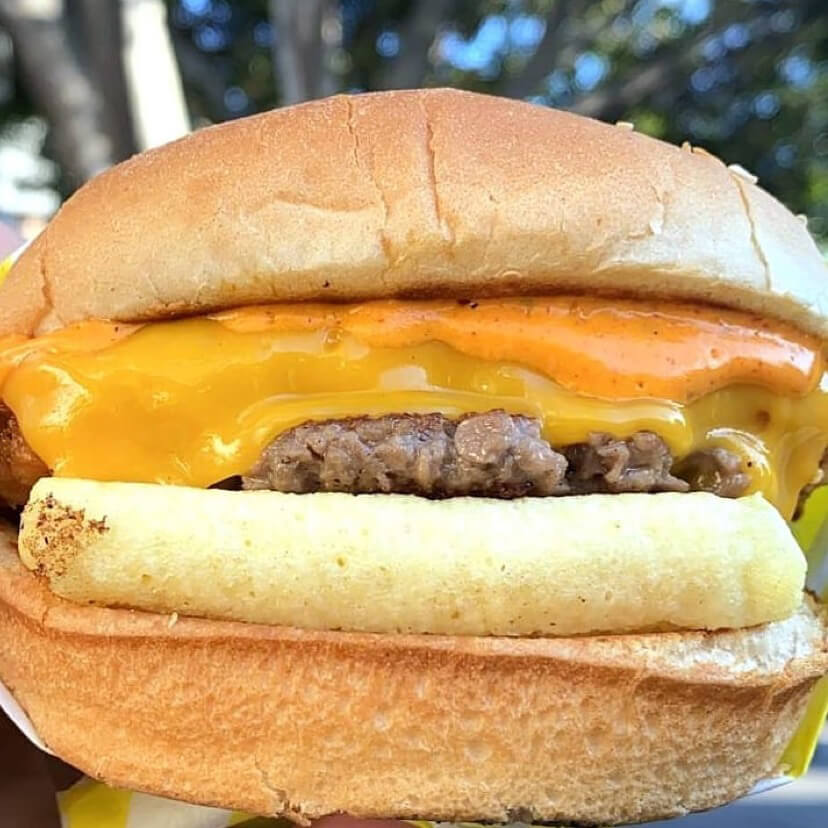 If you want to venture off the beaten path of traditional breakfast sandwiches, pay a visit to this hip vegan eatery for the apple sandwich. This beautiful brunch handheld is layered with slices of gala apples, prosciutto, smoked gouda, avocado, organic peanut butter, heirloom tomatoes, capers, vegan mayo, and coleslaw on toasted sourdough bread. It sounds a bit unorthodox but after just one bite you’ll be craving apple sandwiches all day, every day! 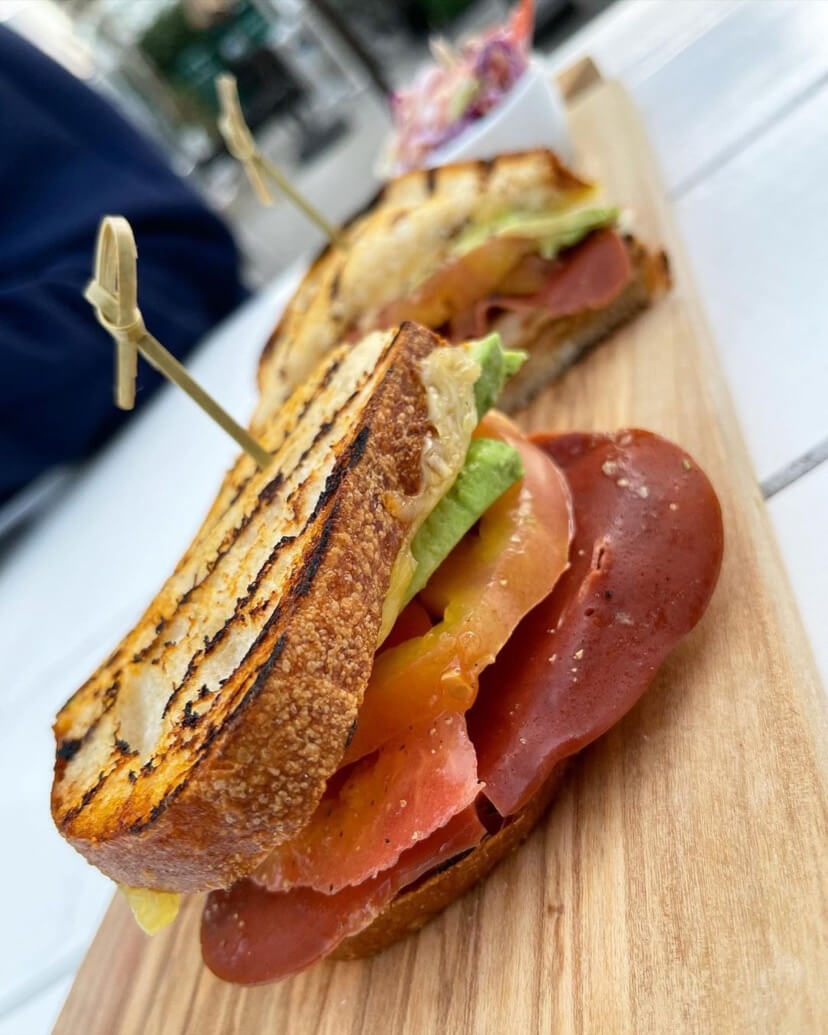 They say that money can’t buy happiness, but it can buy chocolate! As far as we’re concerned, that’s pretty close. After all, who doesn’t love a good ole chocolate bar? The beauty of chocolate is that no matter your preference, there’s an option for everyone. Check out this list of our favorite picks from “milk” to dark and everything in between. Here are 10 vegan chocolate bars you need to try!

No homemade weekend brunch is complete without one of these vegan breakfast sausages. Whether you’re wrapping some scrambled tofu and home fries into a flour tortilla, cooking up that veganized version of biscuits and gravy, or thawing a frozen JUST Egg Folded, you’re going to want some plant-based patties, links, or soyrizo to complete the meal. Here’s our list of top 9 breakfast sausages to start your day.

Your votes have been tallied for the 2021 VegOut Awards, and we’ve rounded up the official results in the “Best Pop-Ups Nationwide” category. These 10 spots are worth following, tracking down, setting reminders in your calendar, and rallying behind at vegan festivals. So without further ado, here are your favorite pop-ups for 2021!

Impossible Meat to Be Served in Select California, Washington, and Oklahoma K-12 Schools

In another stride toward connecting the country’s youth to steps toward climate change, Impossible Foods has secured accreditation to be served in K-12 schools!

Italy-based vegan burger chain—Flower Burger—just opened its first North America location in Culver City. The vibrant-hued quick-service restaurant will begin as a ghost kitchen with plans to open a brick-and-mortar later this summer.

Tyson Foods, leading meat producer in the US, launches a new line of plant-based meats just in time for summer!

Harmless Harvest, known for delivering the first-ever minimally processed organic coconut water in the United States, is now striving to become a carbon-neutral corporation. The eco-conscious company is set to achieve a 50% reduction in greenhouse gases by 2025. The progressive producer offers a variety of organic, ethically sourced coconut products, including coconut waters, smoothie drinks, and plant-based yogurts made without pesticides or synthetic fertilizers.

Kayla Pasko
News
See the article eleven madison park is reopening as an all-vegan restaurant
May 4, 2021

Eleven Madison Park Is Reopening as an All-Vegan Restaurant