Vegan Mob began with owner and founder Toriano Gordon giving out free vegan gumbo on a street corner in early 2019. Less than seven months of pop-ups and farmers markets later, the brick-and-mortar restaurant opened its doors in Oakland and has been cranking out next-level vegan BBQ and soul food ever since. How did Gordon manage to build this small dream into a profitable restaurant in less than a year? You’re not the only one who wants to know. Gordon credits his success to making quick decisions and never giving up.

After going vegan for his health a few years ago, Gordon noticed several benefits and made it a mission to share these benefits with others near him. A San Francisco native, Gordon has always been plugged into the local community. His two-decade-long rapping career started and grew there, and he spent ten years helping at-risk and formerly incarcerated kids in the area. Needless to say, the Bay Area holds a special place in his heart, and Vegan Mob is already on track to become an iconic name in Oakland and San Francisco. The Oakland location has been open for less than a year and a half, and Gordon is already looking at real estate in San Francisco to open up a second location.

How did this pop-up turned brick-and-mortar take off so fast? Just check out their Instagram (@officialveganmob) and you’ll see the dedication and love the restaurant has received from the community. Celebrities, food critics, local residents, and even out-of-staters can’t leave enough rave reviews for the food, and Gordon’s unrelenting positivity and dedication shines through.

So resounding was the support for Vegan Mob that on their grand opening in October of 2019, they sold out of everything … in three hours! In those early days, it wasn’t uncommon for customers to wait hours for their food, with a constant line stretching around the block. While you’re still likely to see that long line around the corner, Vegan Mob has expanded and regularly cranks out orders for a full (outdoor) house. 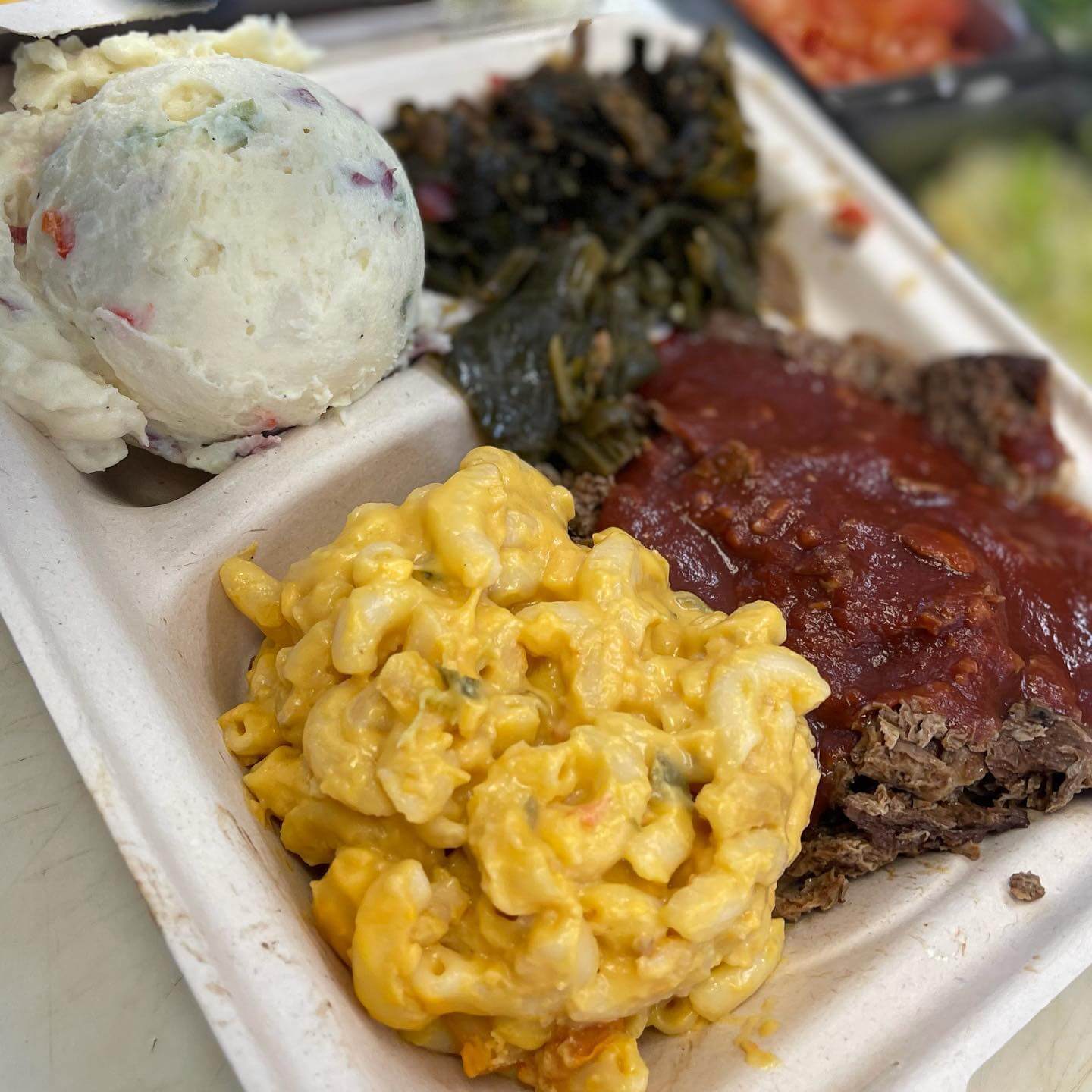 The menu boasts all of the classic BBQ fixings, offering small, large, and combo plates so you can choose your favorite proteins and sides to fill up your plate. The protein offerings include Spicy Fried Chicken, Fried Shrimp, Brisket, Links, and Rib Tips (yes, vegan rib tips!) Pro tip? Don’t sleep on the Smackaroni, and make sure to load up on at least one portion of Brisket. Grab a slice of Sweet Potato Pie to finish it off, and you’re in for a glorious food coma that will be well worth it.

But Vegan Mob is more than just BBQ. Filipino and Mexican fusion flavors decorate the menu, making this truly a one-stop-shop for all your vegan cravings. They have tacos stuffed with Impossible meat, cheese, fixings, and their famous “mob” sauce. They have fried lumpia served with garlic fried rice. They even have a battered and deep-fried grilled cheese sandwich, which we’ve been told absolutely must be enjoyed with a side (or three) of mob sauce.

Make sure you check out those specials too. Past rotating weekend offerings have included a Garlic Prawn Barbequito, Shrimp Alfredo Fries, and a Fried Chicken Po’Boy. 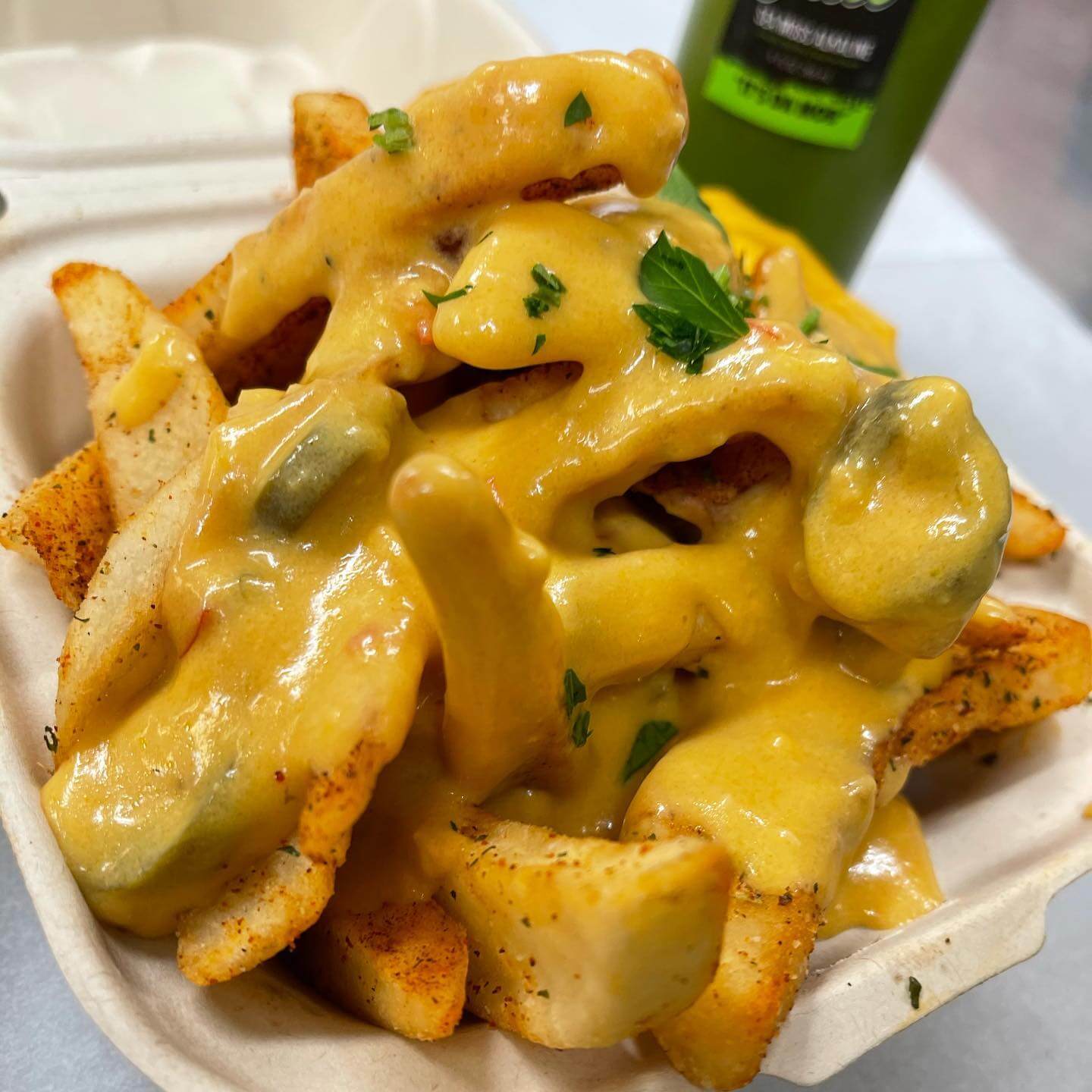 Where to Find Vegan Mob

Vegan Mob is located at 500 Lake Park Ave in Oakland, California and Gordon plans to stay there as long as the land is available. He has made it known that he’d like to find secondary premises in San Francisco, and—while that hasn’t happened yet—he just announced that the Vegan Mob food truck will be popping up at Valencia and 185th St in San Francisco. The tentative opening date is set for March 20th.

The Oakland location is open from 11am-9pm Tuesday-Sunday. It’s a takeout-only concept, so while you can’t dine outside, you can skip the line by ordering ahead on their website. If you’re looking for delivery, check out the Vegan Mob on Caviar, and keep an eye on their Instagram to see what new locations the Vegan Mob food truck will be hitting up next!