The streets are buzzing! And no, it’s not the adjacent tattoo parlor. It is Mothership, owner Kory Stetina’s intergalactic cocktail bar on 30th Street in South Park. Stetina also owns Kindred, eight blocks south on the intersection of 30th and Beech. If you didn’t score a reservation for Mothership’s three-week soft opening, don’t fret! We have you covered with the inside scoop. Prepare yourself for an intimate affair where the romance of island life meets a world of veggies and Southeast Asian spice.

Like a well-programmed GPS, many vegans almost instinctually navigate themselves around their local vegan food scene. So when Kindred opened in 2015, San Diego’s plant-based community knew the drill. What many may not have expected was having to beat out their carnivorous comrades for a seat. The combination of ambient lighting, killer decor, world-class cocktails, and memorable plant-based bites makes Kindred one of the best cocktail bars in town.

Mothership is a self-described tropical space escapist bar, a crashed starship containing reinspired classic tiki cocktails adjacent to elevated street food. When you enter, wrap around a small corridor where the lighting will dim, and the spaceship theme is in full effect. You can stargaze from your seat while an eight-hour original soundtrack pressed into vinyl carries you through the night. Maybe your table is under the grotto. You might even be at the bar. Wherever you are, look for what resembles a flight manual. It’s your menu, and it’s time to eat! 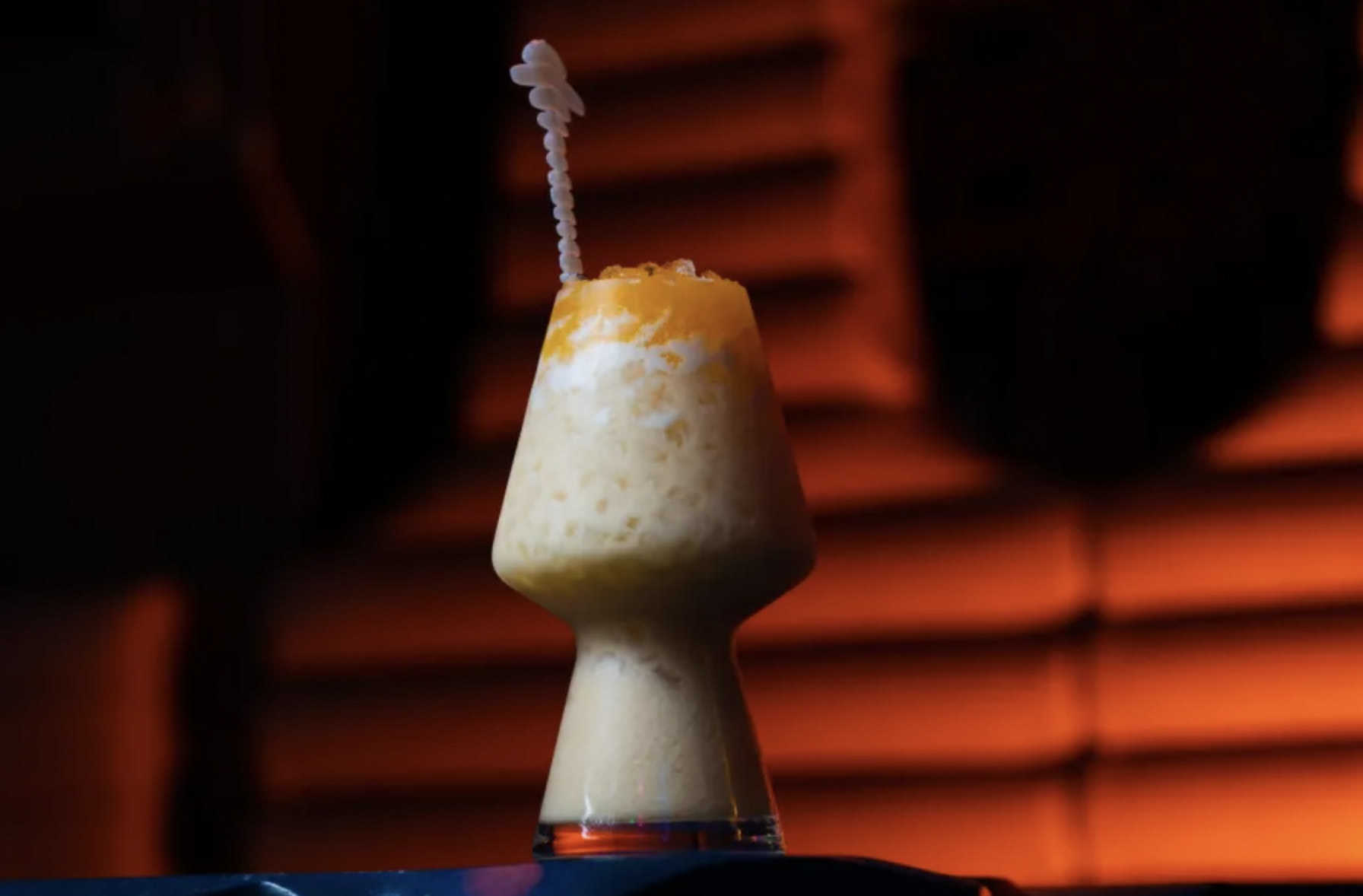 Vegan food in South Park San Diego just cranked up a notch. Order the salad before anything else. It’s deconstructed and served in a lazy susan-style multi-compartmentalized bowl. The fixings include grilled oyster mushrooms, kimchi, Italian pickled veggies, and Bibb lettuce cups. Assemble your masterpiece, then look toward the center of the bowl for the peanut gochujang glaze. It is silky with layers of heat.

Next, you won’t want to miss the potatoes! They’re geometric, crispy, and garnished with Japanese cucumber and black radish. Do yourself a favor and drag a potato through the kimchi cream cheese. You can thank us later! Now, on to the tofu. It’s served on an open-faced banana leaf as if it came straight off the plane from Tahiti. If you are still searching for more heat, you’ve found a friend in the Tomato Saffron Sambal on the corner of your tofu plate. It will remind you of a chunky chutney-style tomato relish without the over-acidity tomatoes often produce.

Cocktails come courtesy of David Kinsey and feature some tricks you probably haven’t seen. Like the Dive Simulation, which uses an airy Cultured Cashew Butter Gardenia to give it its frothy texture. Or the Heliotropic, a kumquat, mole, lime, sugar, and curry riff on a mai tai. The citrus notes of the Mindkiller honor the Painkiller from which it receives its name, and the Homing Beacon could make a cocktail lover out of almost anyone.

Mothership is set to open for regular business hours at the end of this month. For more information, visit MothershipTrip.com.

Jared’s passion for travel and culture are fueled by his upbringing near the Mexican-American border in San Diego. He is in constant pursuit of ways to reduce his carbon footprint and dreams of someday owning a cocktail bar. If he were on an episode of “What’s in My Fridge and Pantry,” you’d find an abundance of fresh fruits and vegetables grown by the region’s farming and co-op communities.