Here’s Where to Find Vegan Flan in Los Angeles

Stop by one of these spots in LA to grab a slice or two of vegan flan! This delightful dish has quite an extensive history, but it is most widely recognized as a sweet caramel custard dessert most popular in Spain, Mexico, and Latin America. Flan is traditionally made using eggs and milk––but leave it to us plant-eaters to find a way to veganize it! These vegan and vegan-friendly restaurants have mastered the sweet, decadent flavor and light, creamy texture of this iconic dessert. But beware, this article may cause you to drool!

Delicias Bakery and Some

From Pan Dulce, Cakes, and Aguas Frescas to Tortas, Queso Fresco, and Carrot Chips, this family-owned shop has something for every occasion and craving. Their Flan Vegano (or vegan flan) is gluten-free, soy-free, and melt-in-your-mouth delicious! Pick up a single-serving container of this classic dessert or place an order for a large version to share with the fam. 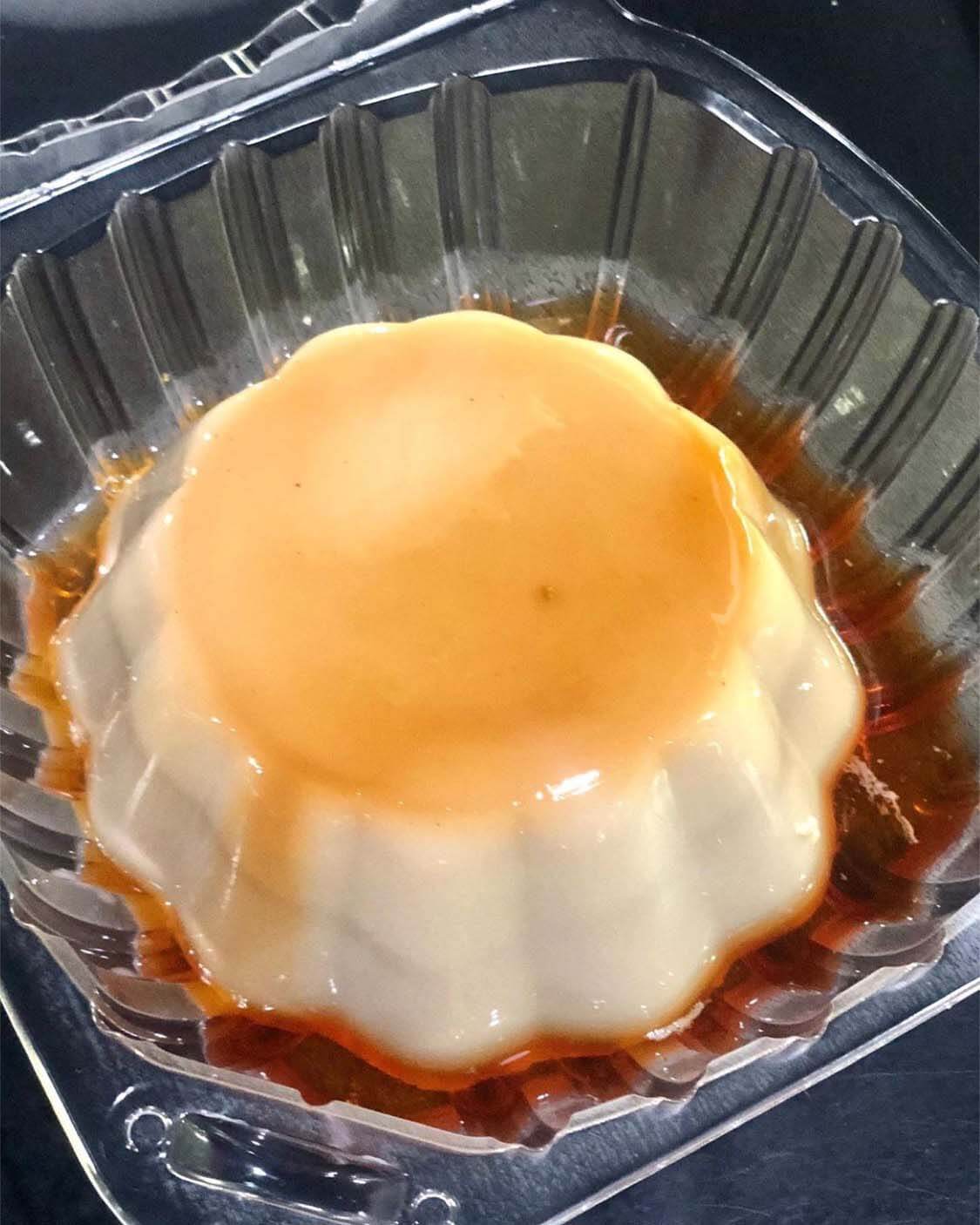 While traditional flan recipes require an oven, most vegan flan recipes available online only call for refrigeration. Determined to craft this delectable dessert the authentic way, Vanessa from Consciously Baked started experimenting. After many attempts, she perfected her rich and creamy Baked Vegan Flan––but she didn’t stop there! Vanessa took things to the next level by creating another menu item called the Chocoflantastic, a layer of baked flan atop a bed of chocolate cake. Yum! 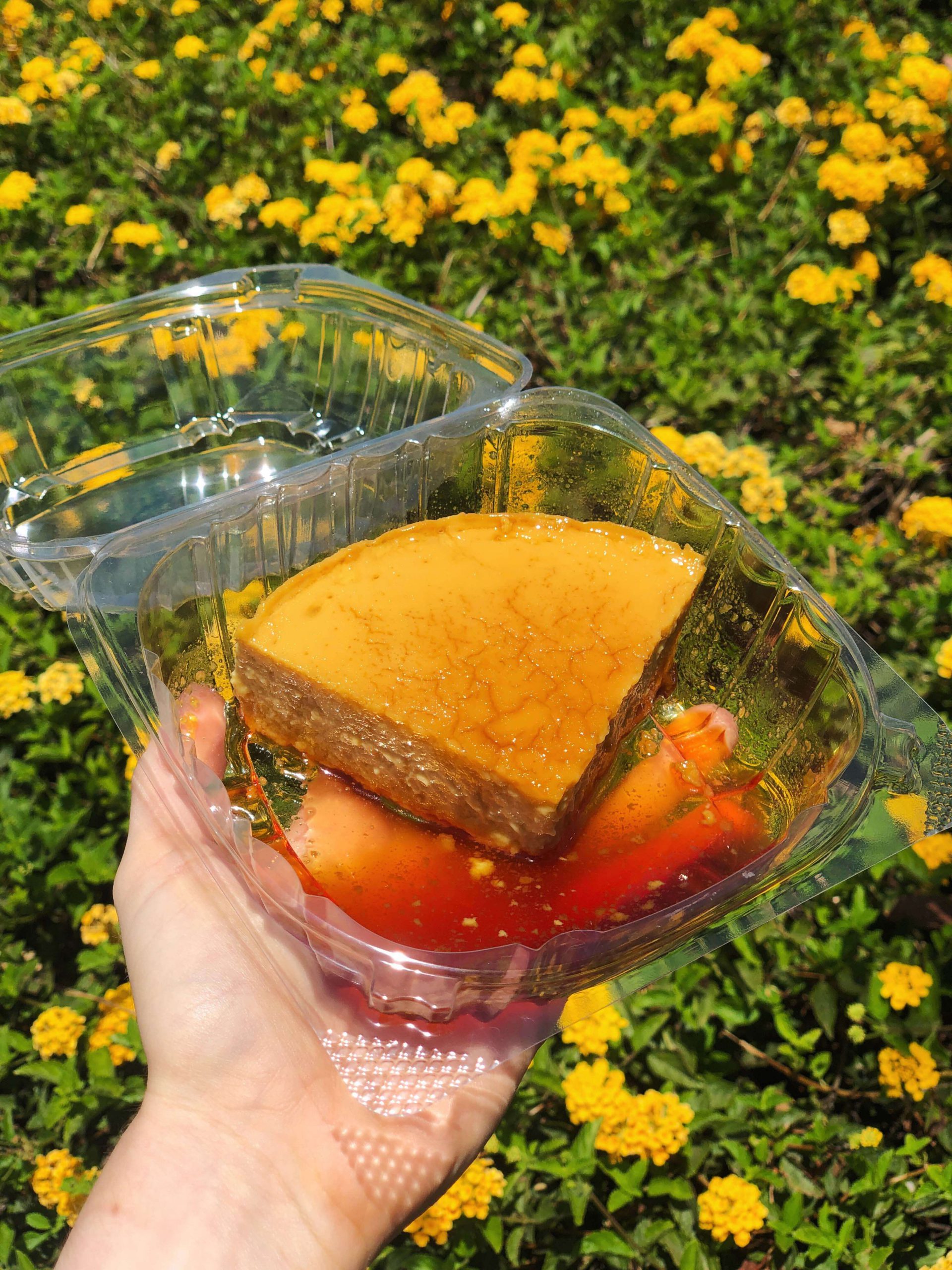 This new vegan Mexican restaurant is a great spot to stop for flan (and tacos)! Does their florally decorated flan seem a bit familiar to you? That’s because this restaurant was opened by one of the co-founders of the wildly popular plant-based pop-up, Vegatinos. Now you can order their great-tasting treats you know and love Tuesday through Sunday. See you there! 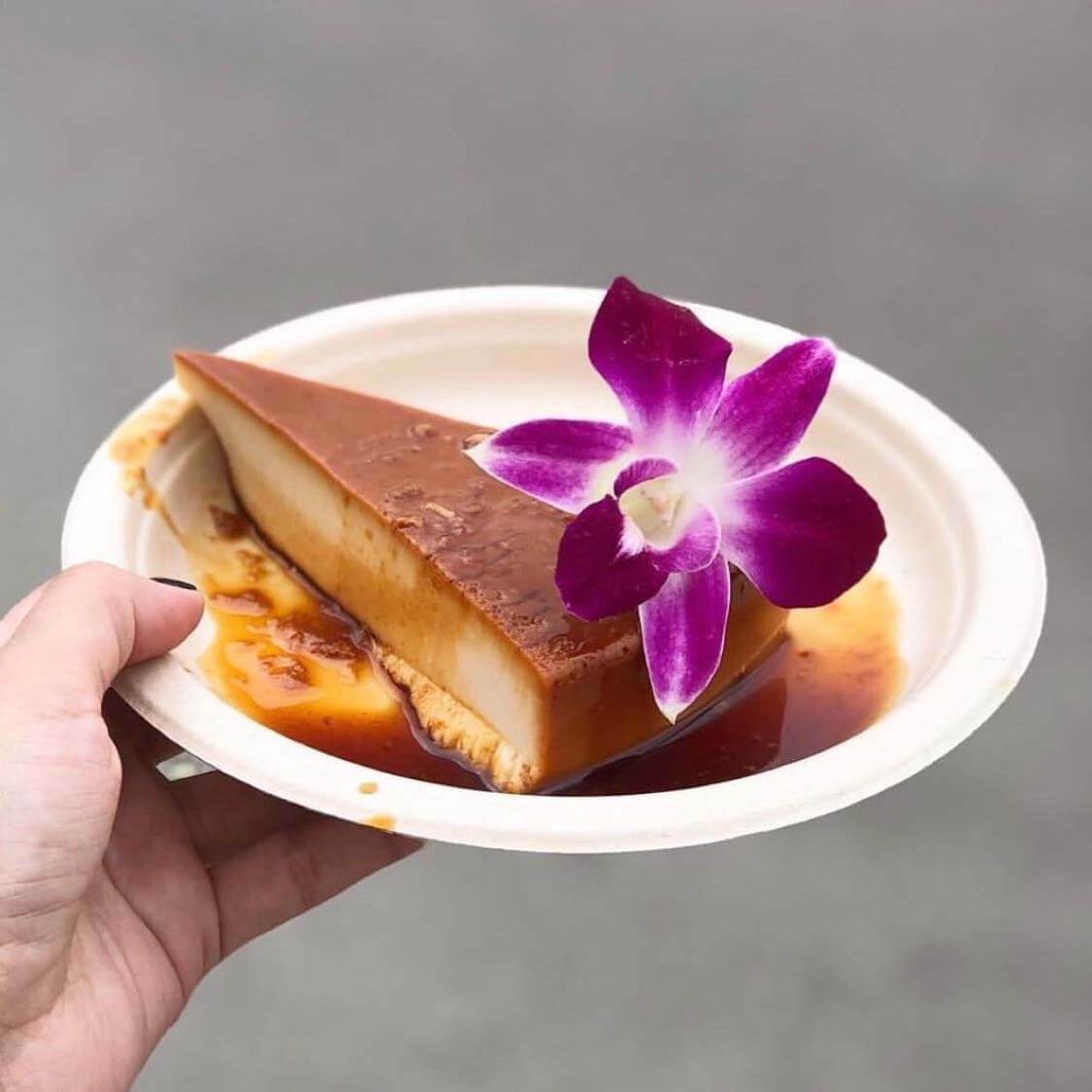 Inner Peace Cafe is an all-vegan gem in the heart of Orange County with a menu that offers a vast array of flavors and dishes––including flan! Their Fabulous Flan is composed of house-made creamy custard with drool-worthy coffee caramel sauce. Yum! While you’re there, try some of their other enticing eats like Portobello Tenders, Chick’n Curry Stew, and Radiant Ragu. 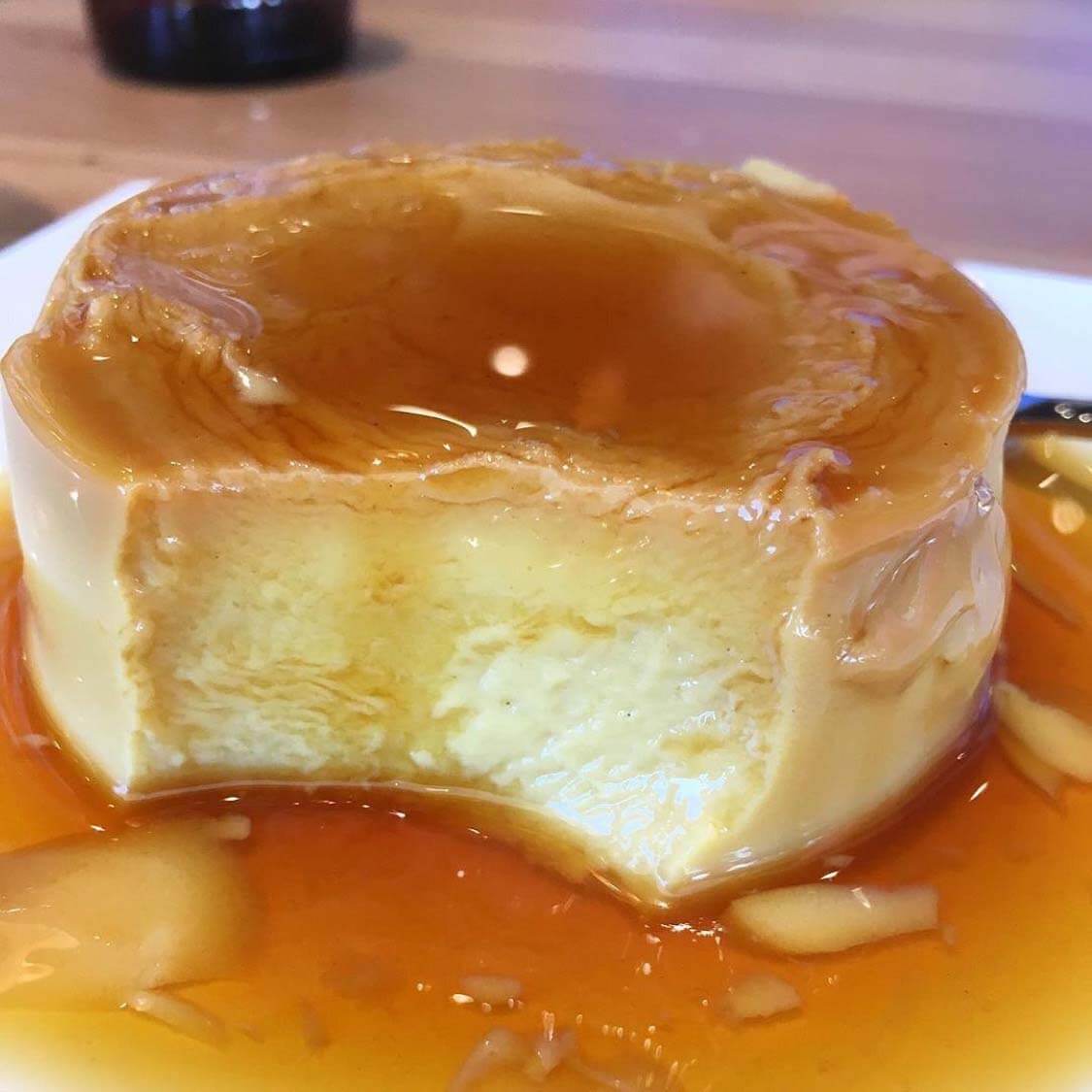 What’s our motto when we visit this vegan-friendly restaurant? “Come for the tamales, stay for the flan!” Well, you can’t technically stay there given the current restaurant closures––but the point is, their flan is amazing! Mama’s Tamales is run by a wonderful family with recipes that will elevate your palate to a different dimension, and picking up their vegan flan is a must anytime we’re in the area. We can’t help it! 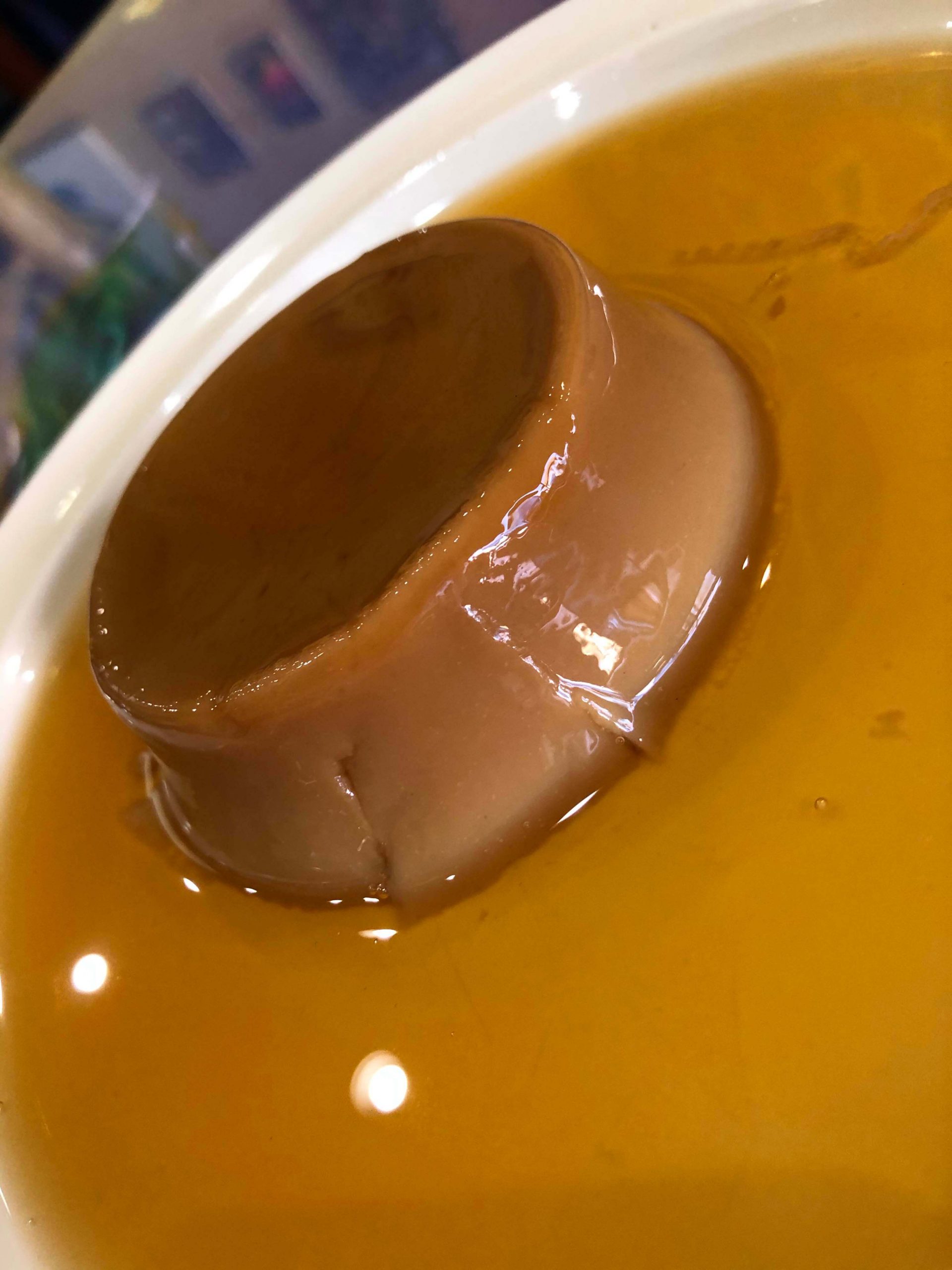 Not only does this all-vegan panaderia craft the most bright and colorful vegan conchas, but they also stock Vegan Flan and Chocoflan! Yep, you read that right––CHOCOLATE. FLAN. It’s smooth, sweet, and satisfying! Pro tip: enjoy your slice with a glass of vegan Horchata or Champurrado. You’ll thank us later! 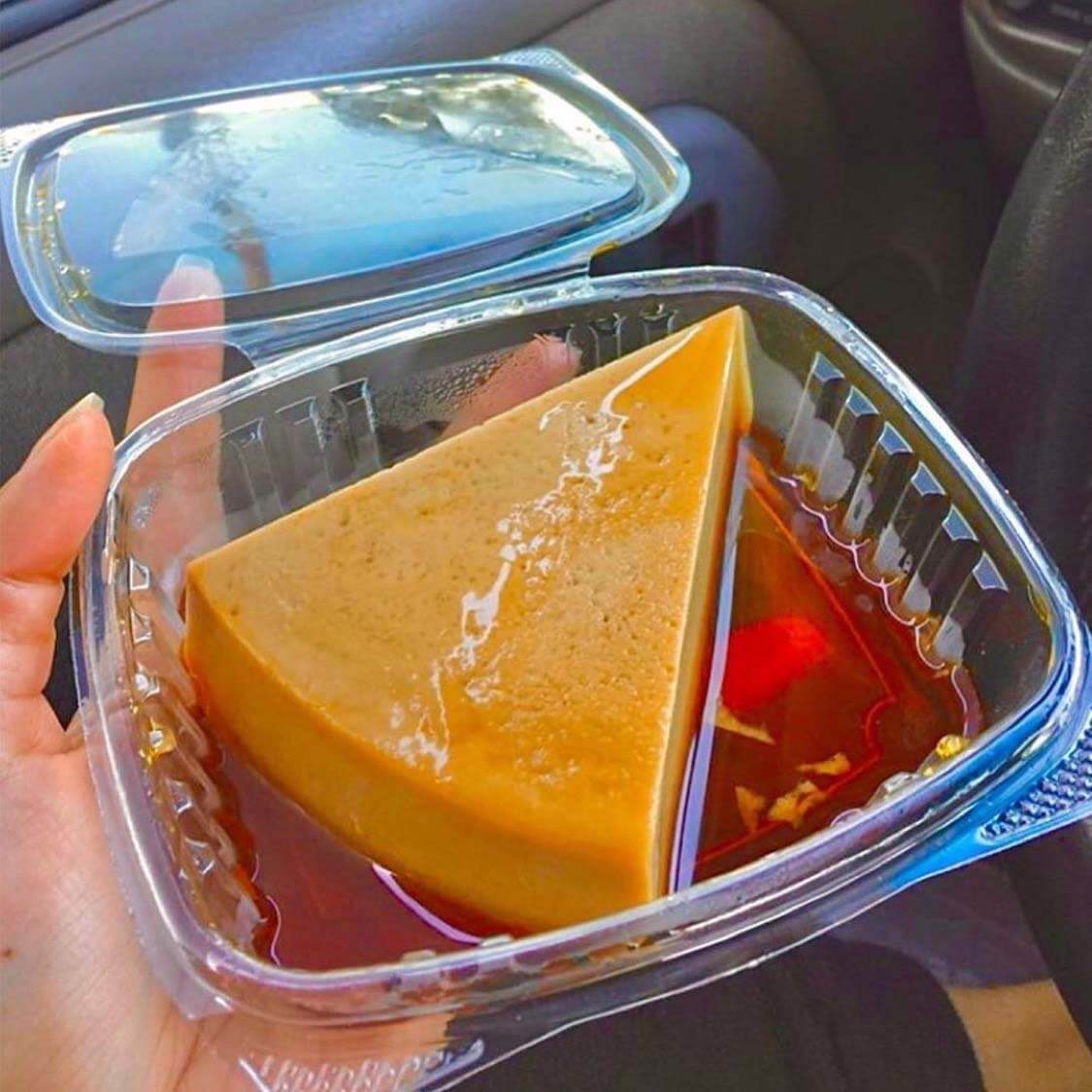 The light and refreshing Aguas Frescas from this vegan pop-up pair wonderfully with their Fantastic Vegan Flan. In fact, their flan is so good that Cena Vegan now sells it through their pickup and delivery services. If you think you’ll love it as much as we do, you might as well just place an order from Aguas Veganas for a full-size flan! They’ve also got Vegan Rice Pudding and Vegan Bionicos with Cashew Cream on their dessert menu. 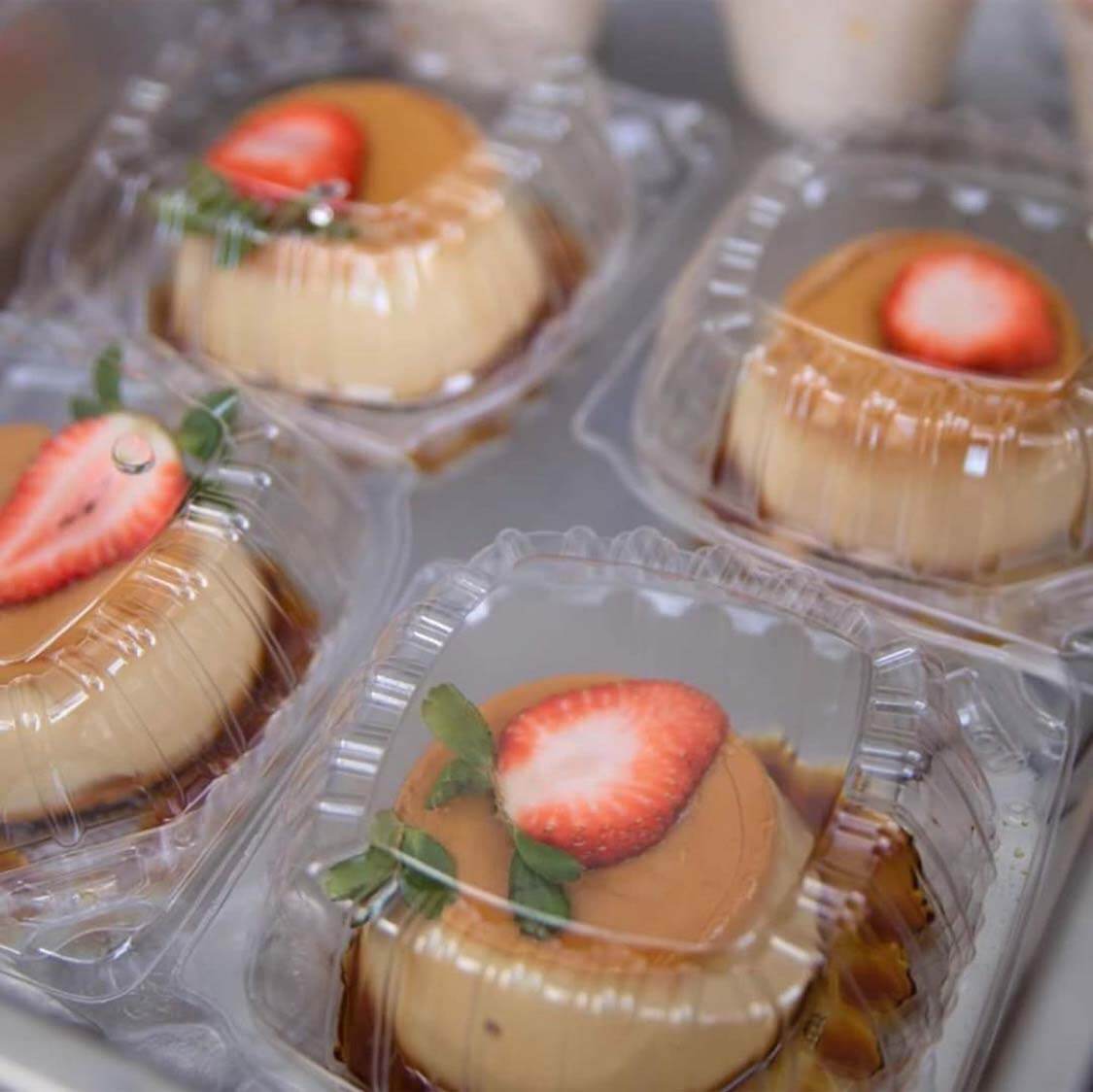 This vegan pop-up turned brick-and-mortar specializes in iconic Mexican dishes with a Californian twist. For the main course, we’d recommend ordering the Cali Bae-rito or Loaded Nachos with extra guac. For dessert? FLAN! Yep, you guessed it––this female-owned restaurant offers a vegan flan that will blow your mind! Other appetizing desserts on the menu include Tres Leches, Peach Cobbler, and Polvorones (Mexican wedding cookies). But be sure to check out the dessert menu in advance as some of the items rotate. 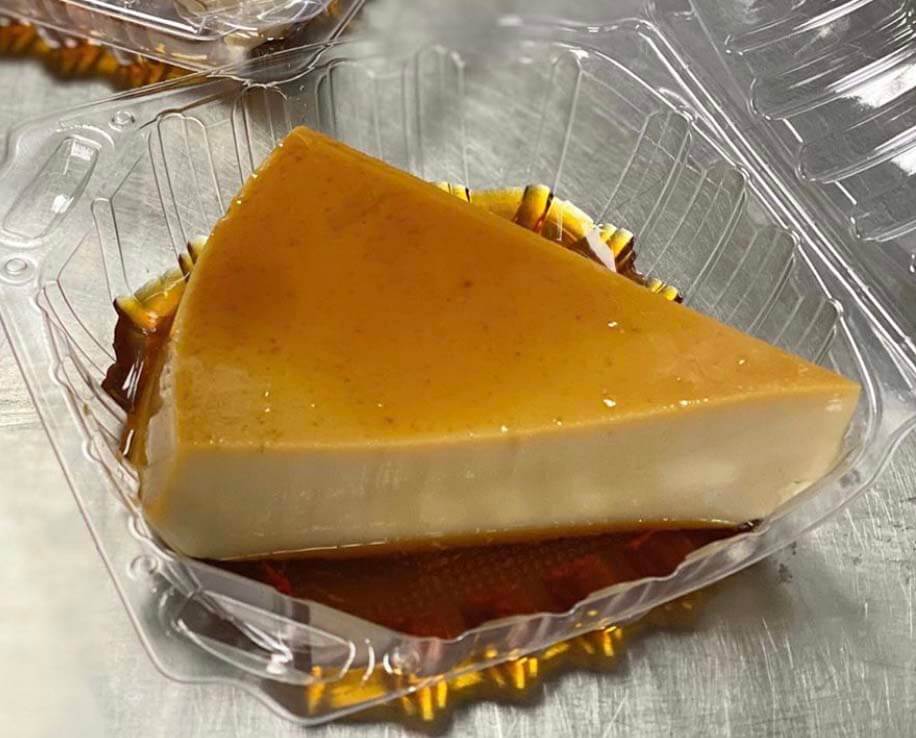 Not sure what to make for dinner? You can’t go wrong with these eight frozen vegan pizzas! We love a good plant-based pie, especially one we can easily make at home. Here are some of our favorite frozen pizzas you can buy in stores and online.

Kayla Pasko
Food & Drink
See the article vegan and vegan-friendly restaurants lizzo has tried in la (and featured on her tiktok)
Aug 4, 2021

The award-winning singer has featured some delicious vegan grub from restaurants around Los Angeles on her TikTok page.

This easy vegan chickpea salad is rich in protein, fiber, flavor, and versatility. Made from plant-based pantry staples, this salad can be planned in advance or put together totally last minute. Try serving it between slices of whole-grain bread, as a dip paired with veggie sticks and crackers, or atop loaded salads. This legume-based dish is the perfect appetizer, snack, and meal addition. For increased simplicity, this salad can be made with or without a food processor—let’s get mashing!

The Met Gala Will Serve an All-Vegan Menu This Year

This 19-year-old basketball player is the latest to join the ranks of plant-based NBA players.

Hot diggity dog! Summertime is in full force, and hot dog season is among us. The perfect seasonal cookout fare can be found in vegan form at all major grocers, but where can you grab a vegan dog piled high with all the fixings? We’re rounding up some of our favorite vegan and vegan-friendly spots to snag a vegan hot dog around the country.

12 Sustainable Loungewear and Pajama Brands to Add to Your Wardrobe

It seems like all we do these days is lounge around, so we might as well dress for the occasion, right? Loungewear is as comfy as pajamas, but cute enough to hop on a Zoom meeting, post to your IG story, or even take your dog out for a quick walk. Here are our favorite eco-friendly loungewear and pajama brands!

These plant-based salad kits are easy to assemble and delicious.

7 Vegan Mayo Brands That Taste Better Than the Real Thing

For vegan BLTs and mashed chickpea salads, having a good plant-based mayo on hand is key. And with the variety of creamy vegan spreads available, there’s no reason to reach for the egg-based dressings again. Check out our list of seven vegan mayonnaise options to try out next.