Most restaurants have mastered the vegan versions of burgers, chicken, and beef, but how often do you find vegan shrimp on the menu? This item is pretty rare, but we’ve made it a little easier for you! After fishing for all of the best places to try vegan shrimp in LA, we’ve curated a list of the top restaurants for you to visit to get your shrimp on!

The shrimp combinations are endless at this Thai fusion joint! Choose soy shrimp as your protein on any of their a la carte, noodle, rice, or curry entrees. If you’re looking for a shrimp starter, order the Mee-Krob or Tom Yum Soup, but don’t forget to leave room for shrimp tacos! The tacos include soy shrimp, shredded cabbage, salsa, cilantro, and spicy gluten-free chipotle mayo, all resting on a warm soft shell corn tortilla. Try them all! 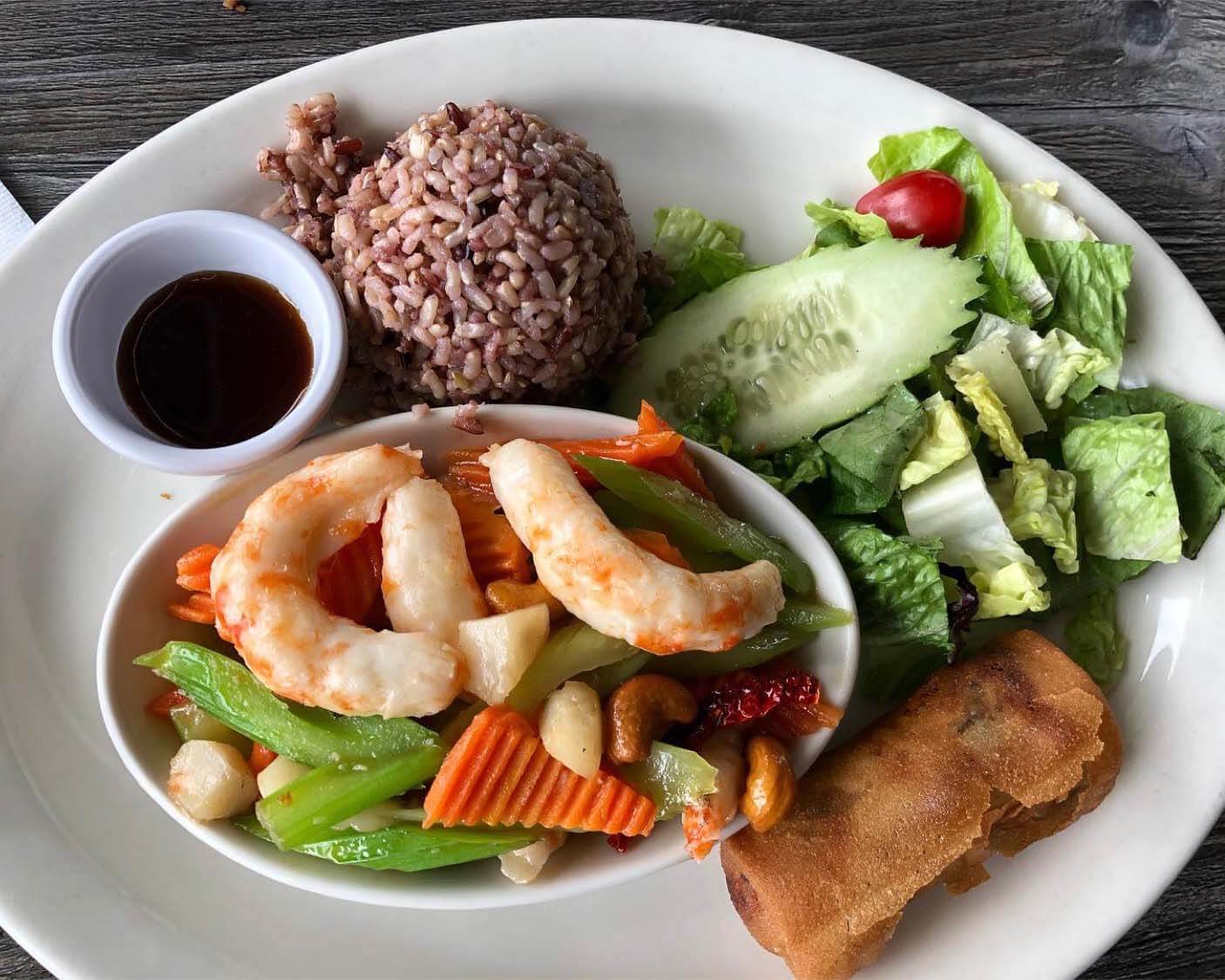 While we’re on the Thai cuisine train, let’s take a stop at the Vegan Joint! Snack on their Golden Shrimp, Lemon Shrimp, or try their Sate with shrimp! If you’re feeling soupy, order the Wonton Soup which includes spinach, wheat flour wonton, soy shrimp and garlic. You can also add these babies to any of their curries, noodles, or rice plates! 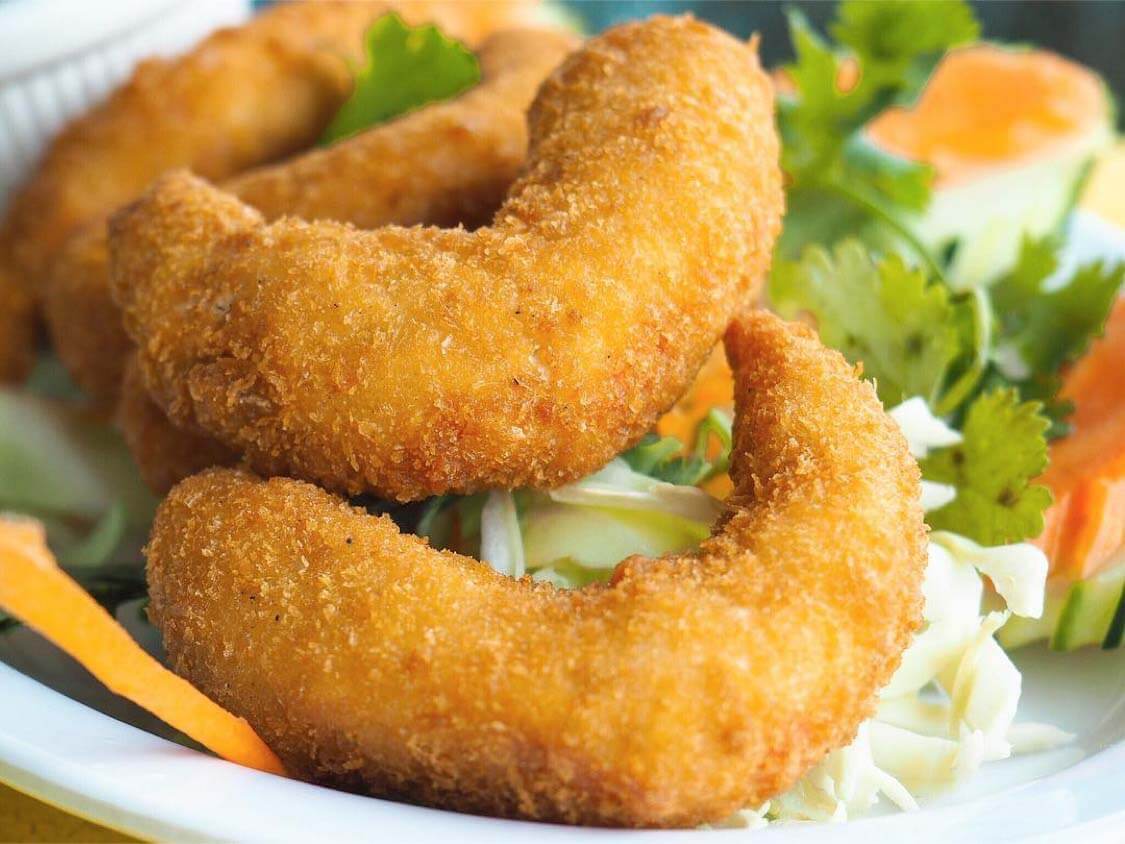 This plant-based pop-up created a dish we didn’t even know we needed until we heard its name––Vegan Pineapple Walnut Shrimp! Served over a bed of white rice and topped with a flower, this beauty pleases all five senses. Other shrimp dishes include Garlic Firecracker Shrimp and Spring Rolls. Be sure to check their Instagram for the pop-up dates and menus! 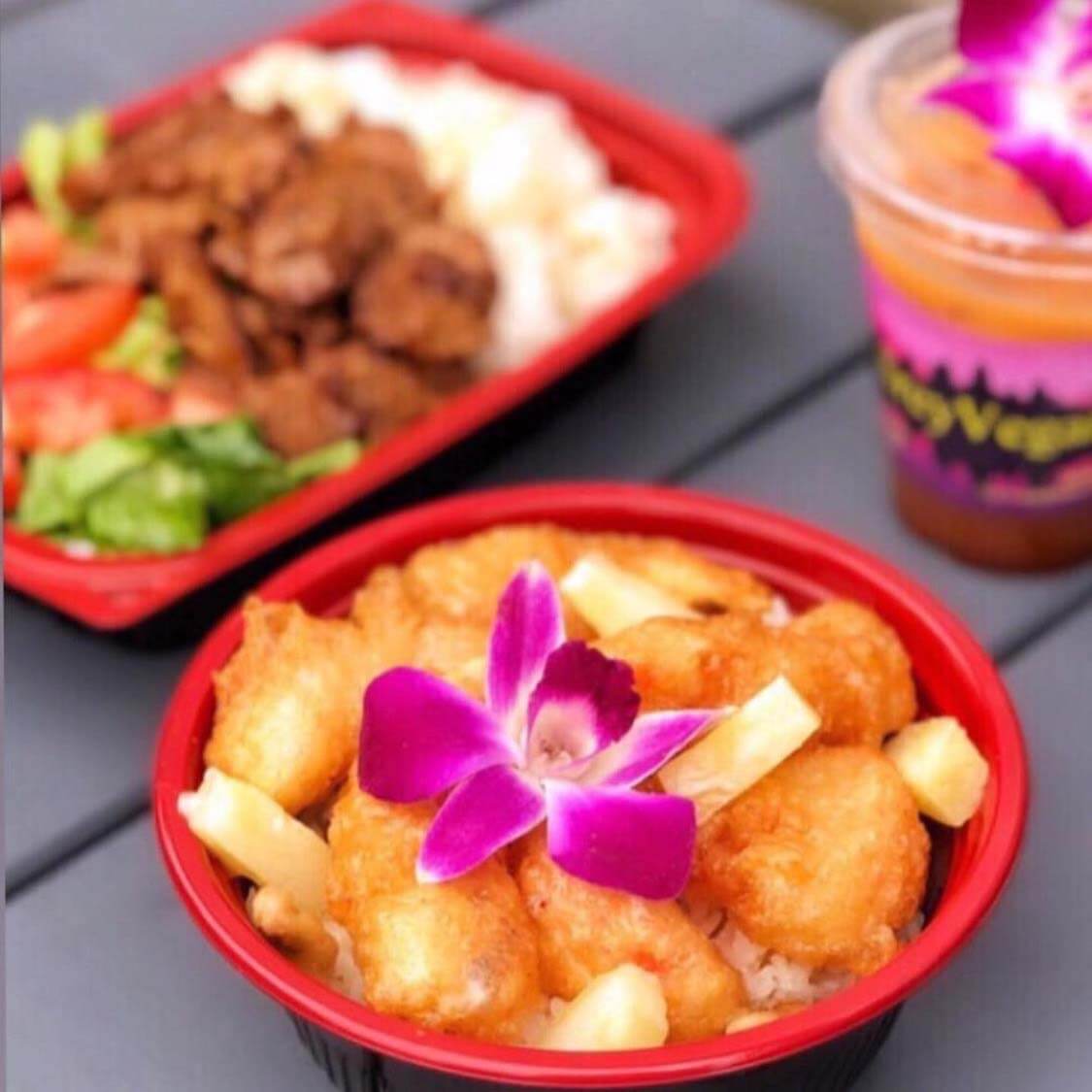 At this all-vegan Italian spot, you have the ability to add shrimp to any pasta or salad. Craving pizza? Order the Tony Spicy, topped with tomato sauce, red onion, green bell pepper, tomato, jalapeno, shrimp, and mozzarella. What about Shrimp Scampi? That’s not something you see very often on a vegan menu, but you will at this spot! 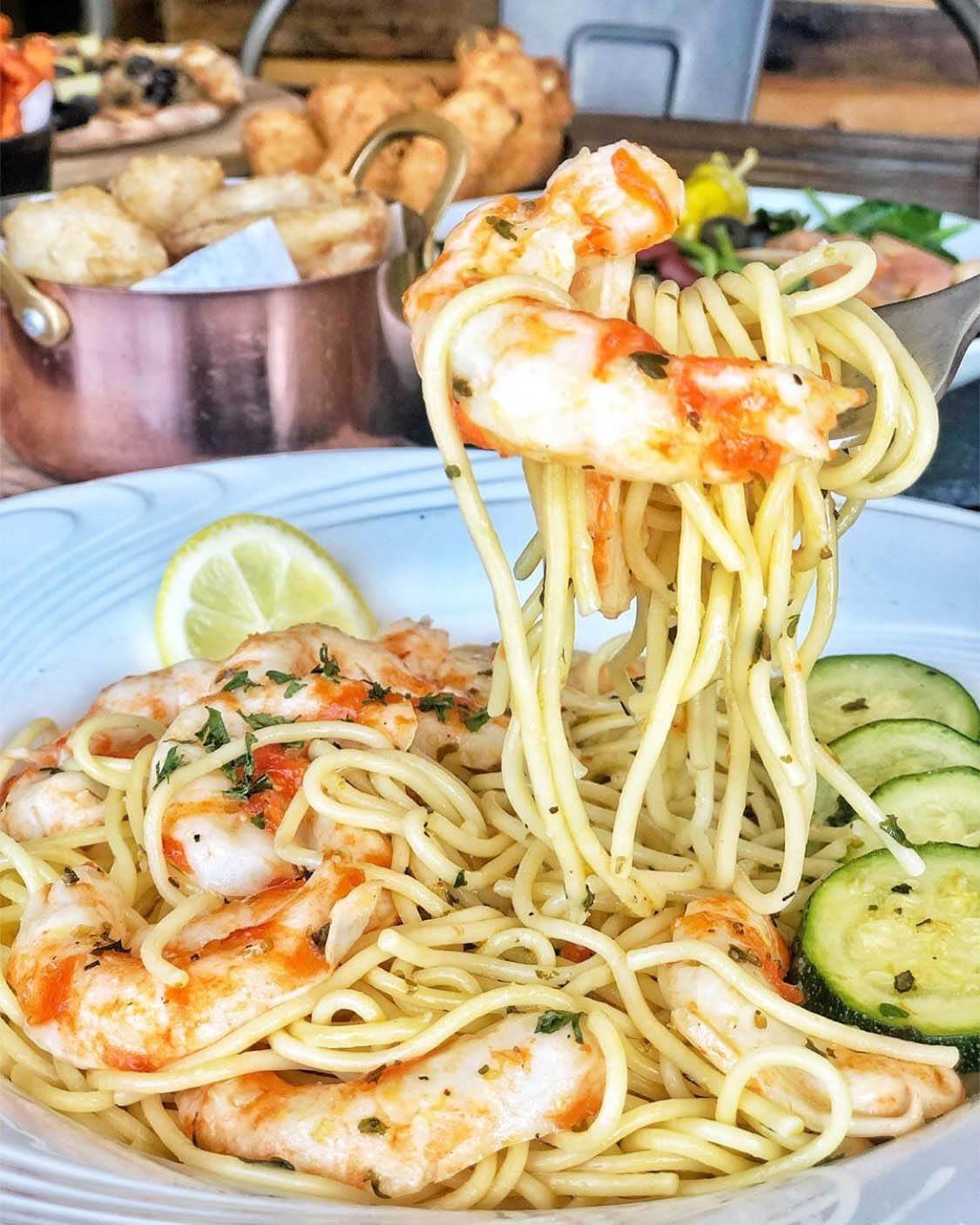 Doomie’s knows exactly how to serve shrimp––fried! Their Fried Shrimp is beautifully breaded, fried, and served with a side of tartar and cocktail sauce. Maybe try throwing them on some of their freakishly tasty fries or order a few of their other hot appetizers, like the Fried Avocado and Jalapeno Poppers to create a sampler trio! 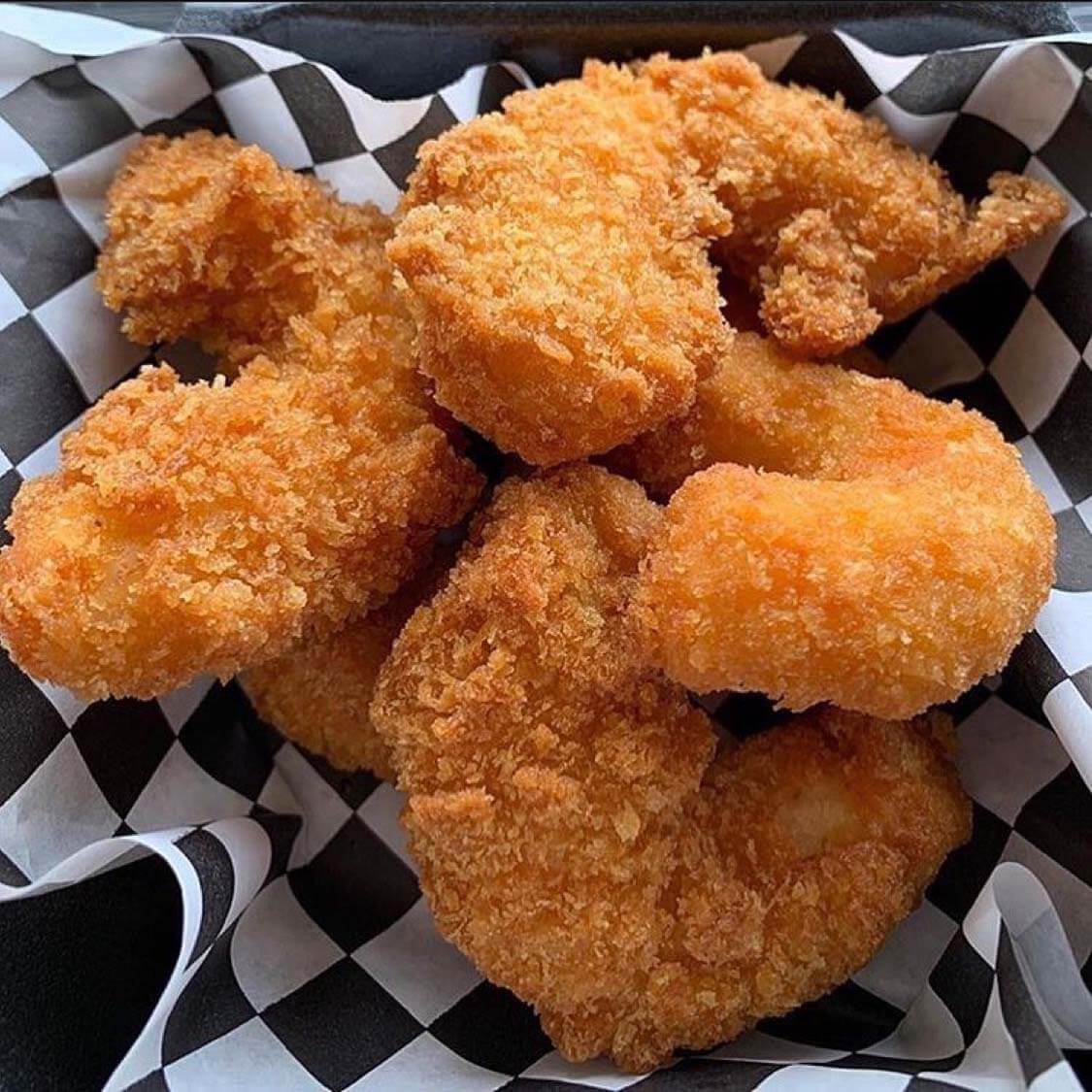 There’s no one who knows flavor quite like Chef Velvet of The VTree! Her famous Cajun Shrimp, made from vegetable protein, is GLORIOUS! Aside from the outstanding flavor, the nutrition of these savory bites is quite impressive! The VTree’s shrimp is gluten-free, soy-free, low-carb, and contains no MSG or trans fat. Unable to visit this spot in person? You can now order their vegan shrimp online for nationwide delivery! 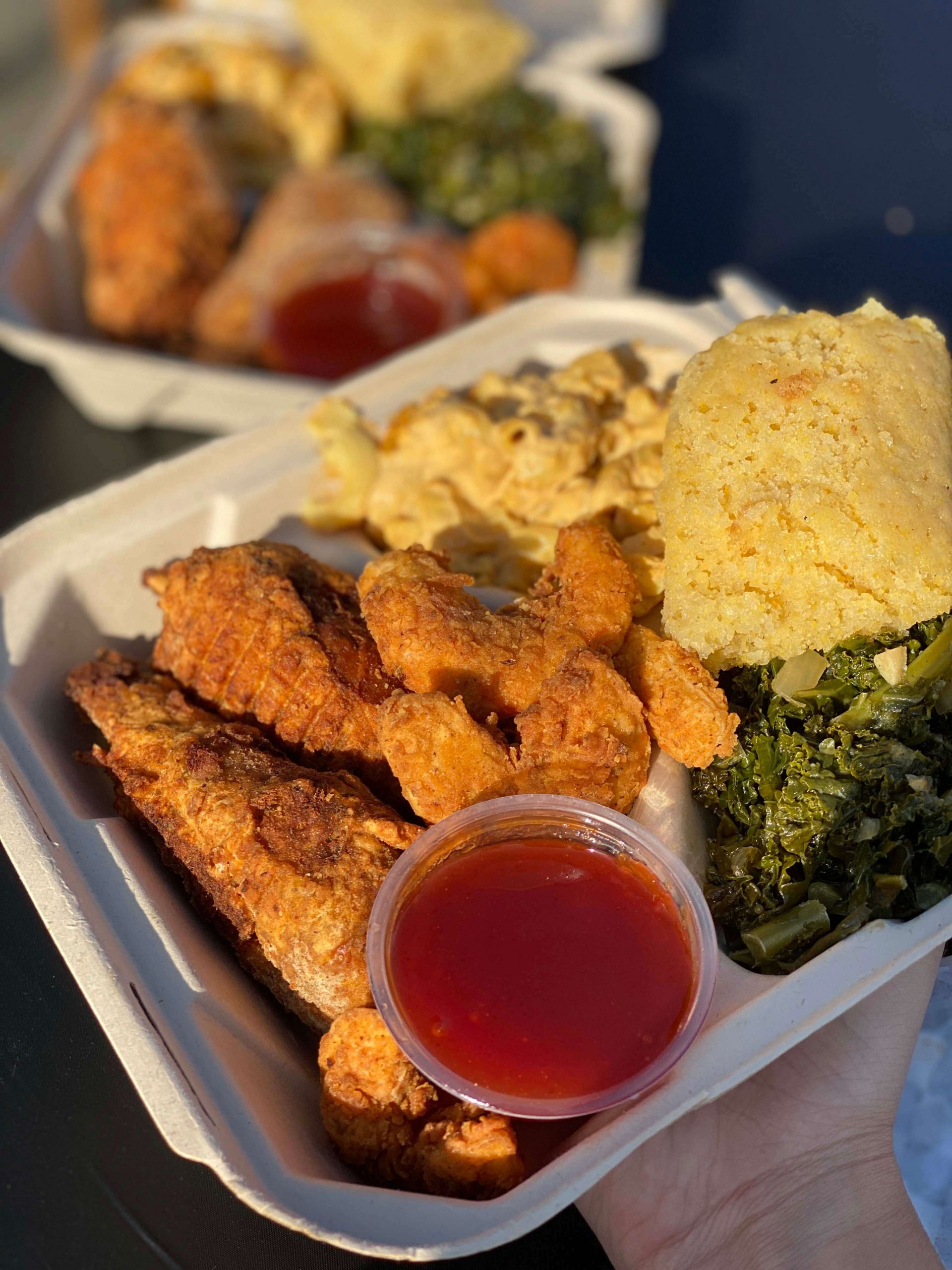 This vegan hot spot offers shrimp that can be added to your favorite menu items upon request. Order it in a taco, try it stuffed in a burrito, or load it up on their MexGogi Fries for a flavor-blasting experience. And when you think things can’t get any better, Chicana Vegana’s shrimp is soy-free! Woohoo! 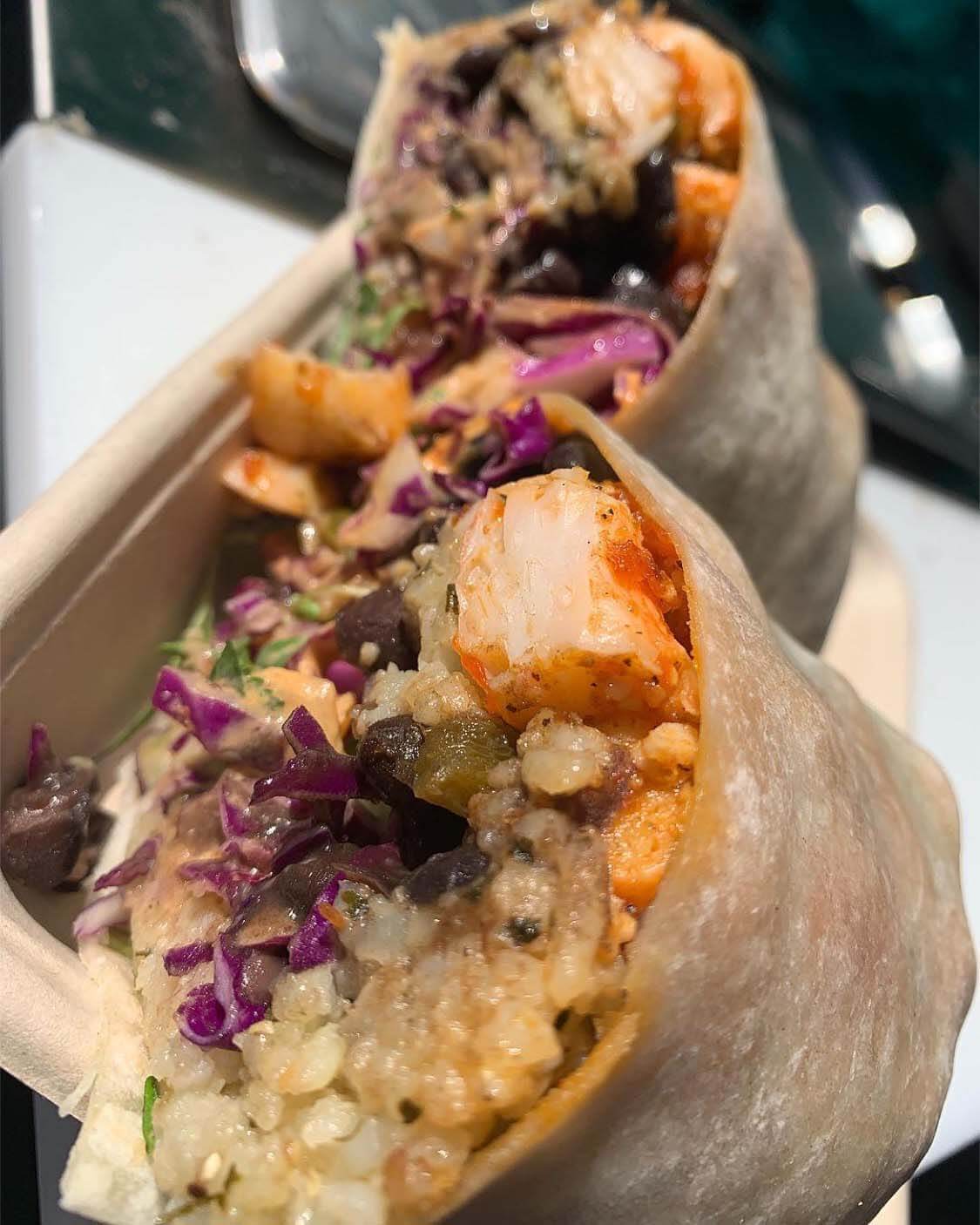 Guess what this place has? If you guessed more shrimp, you’re a winner! Add shrimp to any salad, rice or noodle entree, dinner combo, or get it as a side! Order the Shrimp Dinner for the ultimate well-rounded meal. Including fried soy shrimp, steamed broccoli, cauliflower, carrots, zucchini, and gluten-free wild rice or grilled potatoes, this veggie-filled dinner hits the mark! 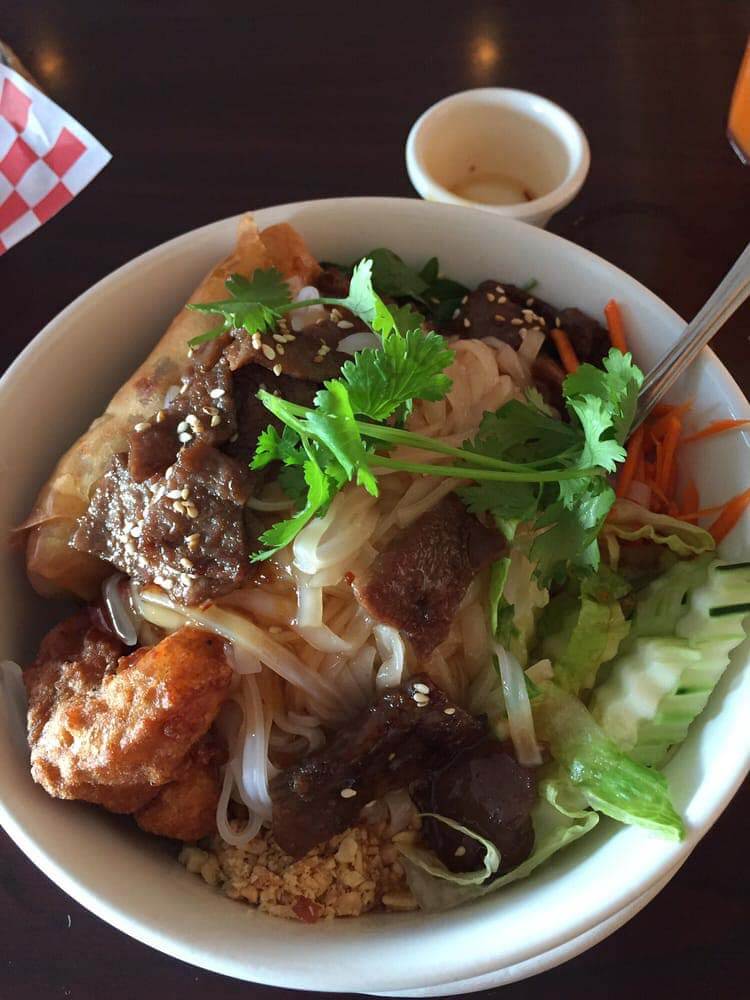 Who lives in a pineapple under the sea? Well––it’s not technically under the sea but this Vegan Shrimp Pineapple Bowl from Kick Ass Vegan won’t have you jumping ship! Try their shrimp on alfredo fries, in a mashed potato bowl, as a ceviche, or in egg rolls, sandwiches, plates, and more! Now do you see where they get their name? Follow @kickassvegans on Instagram for their schedule and event-specific menus. 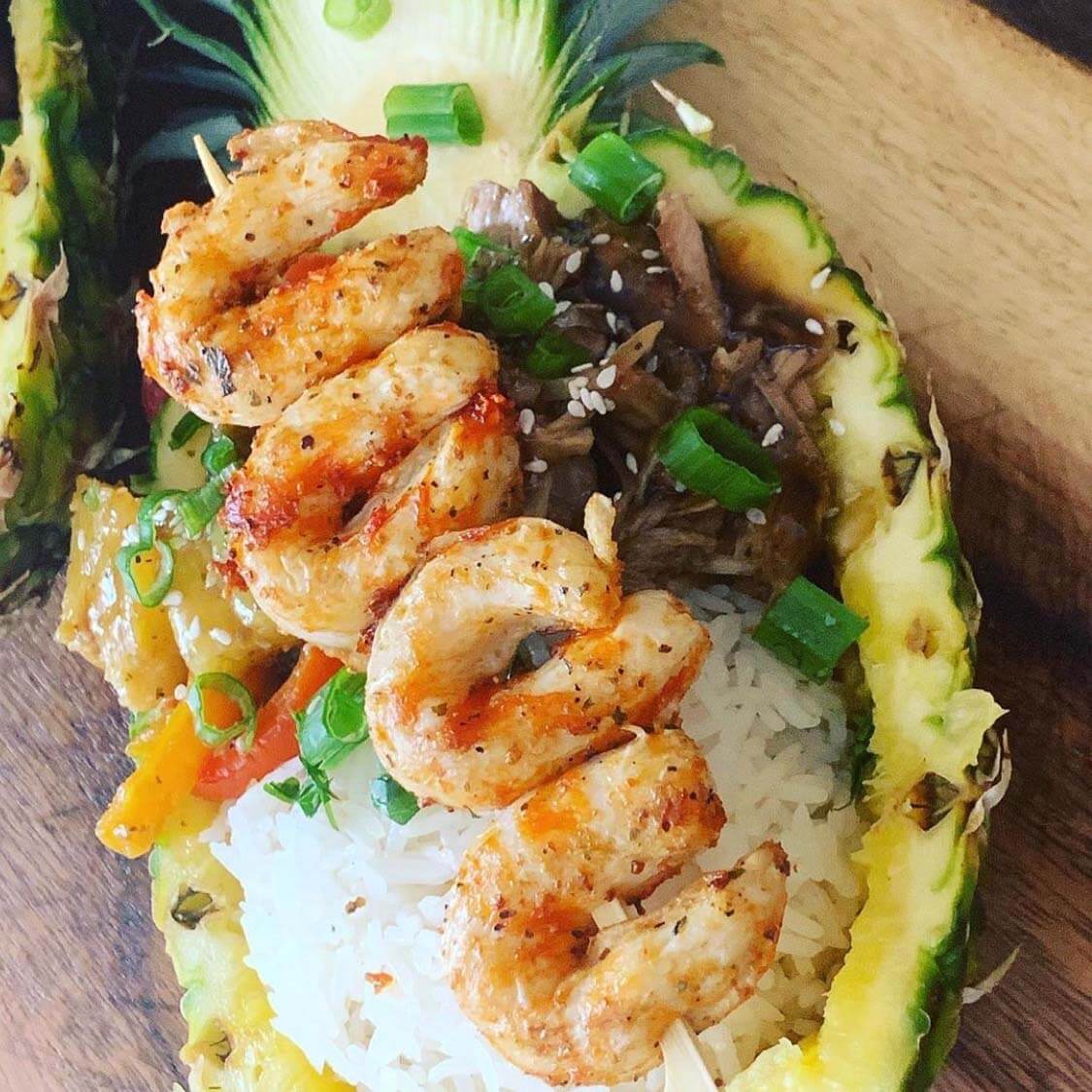 This vegan Asian-fusion restaurant is a collaboration between Chef Adrian Garcia of Naughty Boy Sushi and Chef Syler Tanksley of Munchies Diner. Together, they make some of the most mind-blowing menu items, infused with Asian flair! A few of the shrimp-tastic dishes served at Naughty Panda include the Naruto Roll, Lemon Garlic Shrimp Bowl, and Shrimp Banh Mi! 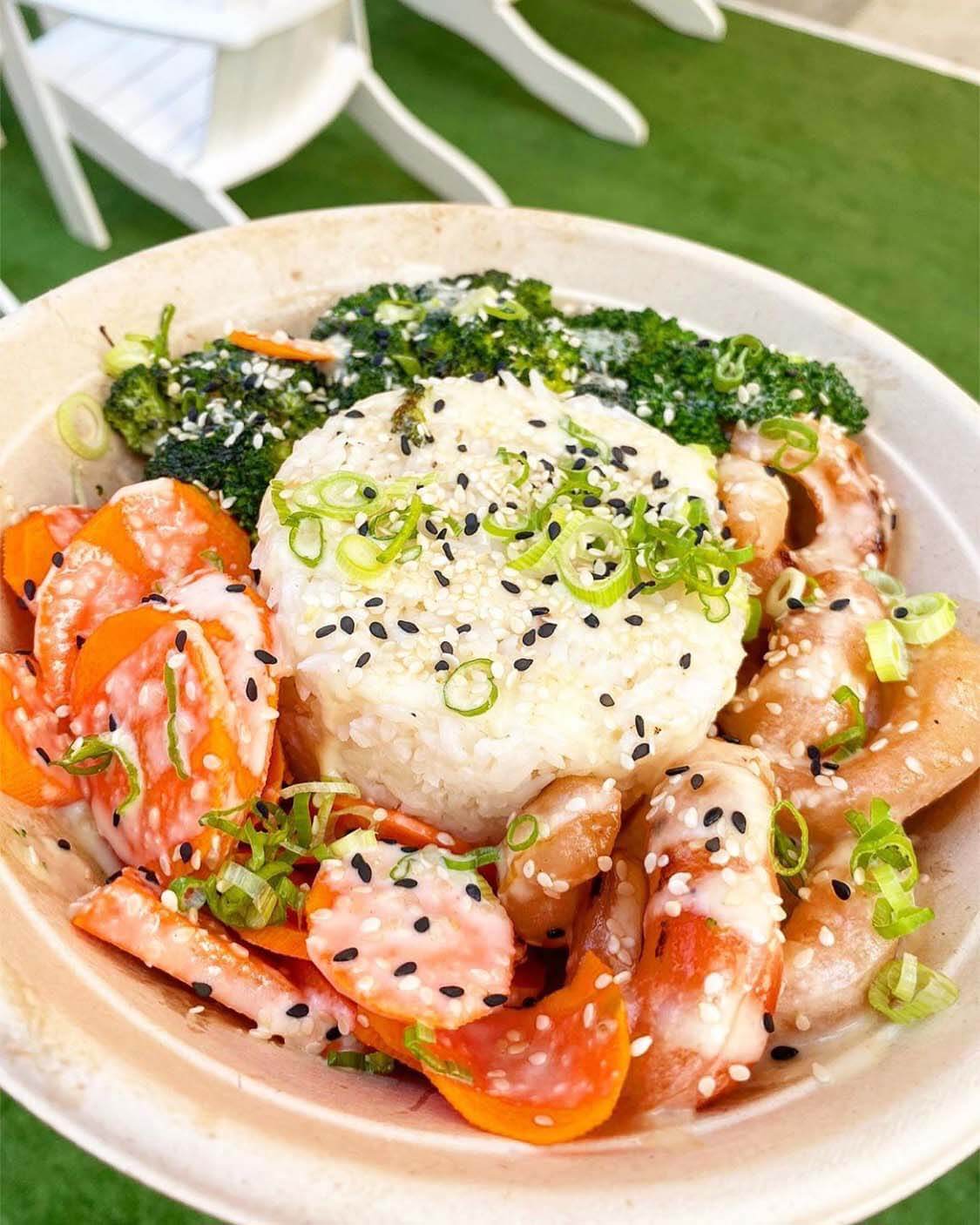 The famed vegan fried chicken food truck caught on fire last night and owners Eva Cannon and Will Perrymon launched a GoFundMe to raise money for a new truck, or brick-and-mortar location.

Thank you, Queen Bey, girls really do run the world, and for International Women’s Day we’re rounding up some of our favorite women-owned vegan brands!

‘Tis the season for comfort food and sweatpants. We’re rounding up some of our favorite go-to comfort food indulgences—found between two slices of bread—from around the city. All of these sandwiches pair nicely with the cozy loungewear overtaking your closet since the beginning of last March, am I right?

NYC is known for having some of the best vegan cuisine in the country—and many of these plant-based eateries are owned and operated by female chefs, restaurateurs, and even fashion entrepreneurs. Whether you’re craving a plate of chicken & waffles, or your sweet tooth is calling for a pecan chocolate cookie—these women-owned restaurants have you covered. Celebrate Women’s History Month by visiting one of these delicious vegan spots!

Start Your Day off Right with These 10 Vegan Breakfast Cereals

The grocery aisle is packed with cereal options and, fortunately for us, there’s a growing number of vegan brands. Whether you’re feeding your inner child with fun shapes and flavors or fueling your adult breakfast cravings with superfoods and whole grains, here’s a list of vegan cereals to get your day started right.

The Herbivorous Butcher Is Opening a Vegan Fried Chicken Restaurant

The first vegan butcher shop in the US is opening a new fast casual vegan fried chicken restaurant this spring!

Guac doesn’t have to be extra, but that doesn’t mean you and your culinary creations can’t be! From spur of the moment fiestas to mashed avo breaky toast to roasted veggie grain bowls topped with spicy guac, the possibilities are endless. With several packaged guacs available, it’s easier than ever to rock out with your guac out. Here are 10 store bought guacamole varieties you need to try.

It’s the perfect time to pull out that favorite recipe and bake some chewy, delicious chocolate chip cookies. The baking aisle is packed with competing chocolate chip brands, and now is not the time to stand around reading ingredient labels. Let us make things easy for you. Looking for gluten-free? Soy-free? Sugar-free? We’ve included chocolate chips everyone can enjoy. Here’s our list of the best vegan-friendly chocolate chips you need in your pantry now.

This is one of my favorite hummus spreads to make! It comes together in minutes and it’s packed with all the spice. I usually serve it with pita tortilla chips but it’s also great with veggies if you’re aiming for a healthier take. It’s a crowd-pleaser and I bet that when it’s done, your only wish is that you made more!

8 Spots for Vegan Milkshakes in NYC

We all love a good bowl of ice cream, but sometimes what we really need is a tasty milkshake to wet our whistles. From fall-inspired shakes to mint chocolate chip, there is a shake for every palate at these vegan and vegan-friendly NYC eateries. Here are eight spots for vegan milkshakes in NYC.